How is Chek Jawa doing after the oil spill?

Today is the first time I'm on Chek Jawa after the oil spill. I only saw photos of the oil slick hitting Chek Jawa shores.

Photo taken on 29 May by Andy on his blog.
How is Chek Jawa doing today, about three weeks after the spill hit the shore? While earlier reports by shore lovers and in the media suggest no major immediate impacts, effects of an oil spill can develop over the long term.

I am here today with TeamSeagrass and did a quick survey of the southern shores of Chek Jawa near House No. 1. See posts by Andy and Chay Hoon who did the northern shores.

The high shore of this stretch seems clear of oil spill signs. Unlike at Tanah Merah yesterday, where we still saw signs of crude. 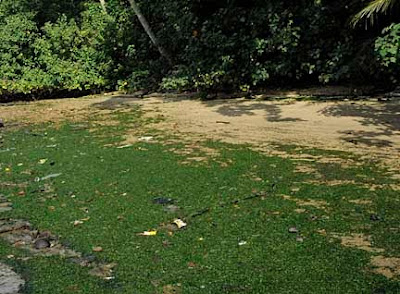 As for the vegetation on the high shore, some of them had yellow tips at the growths near the water line. Possibly as these dipped into oil tainted water at high tide? But so far, most of the vegetation looked normal. 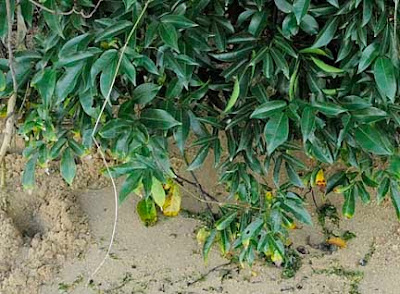 There were many different kinds of snails on the big rocks at the high shore. 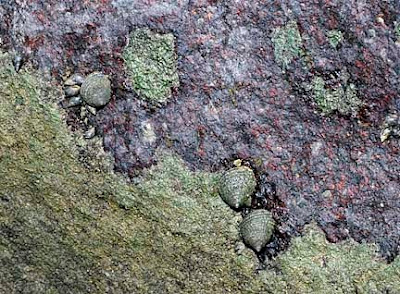 But a sad sight awaited on the meadows in front of House No. 1. On both sides of the jetty, there are patches of 'bleached' Spoon seagrasses (Halophila ovalis). Len of Seagrass-Watch told me to look out for this, which happens when the seagrasses lose their chlorophyll. Even some of the Lettuce seaweed (Ulva sp.) is also 'bleached'. Siti believes the 'bleaching' is in patches because these are probably where crude might have settled on the meadows. More about how the seagrasses are doing today on the TeamSeagrass blog. 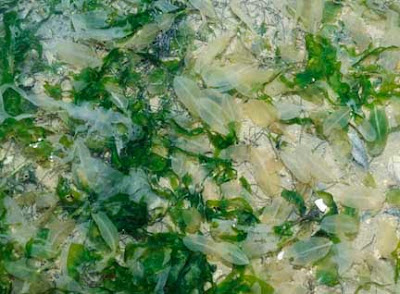 I was also wondering how the mangroves were doing. Particularly after seeing these rather disturbing photos of the spill on the mangrove trees on Chek Jawa. 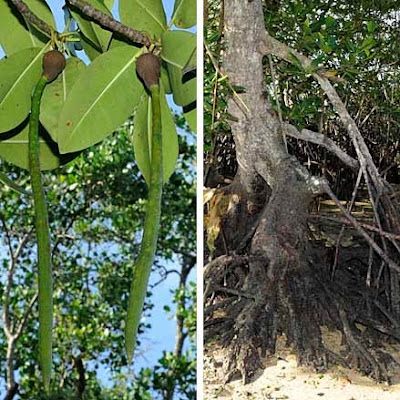 I had a look at another mangrove tree growing near the low water mark, and it too seems to have normal propagules. 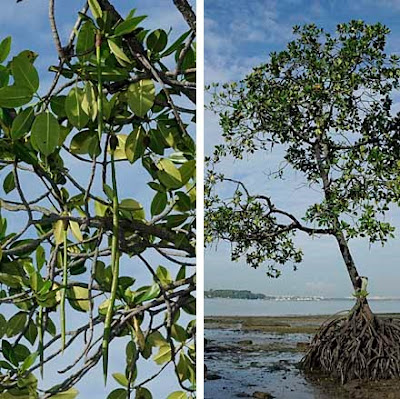 As for the gianormous Perepat (Sonneratia alba) growing near House No. 1 that has Heritage Tree status, I notice that some of the leaves seem a little discoloured. 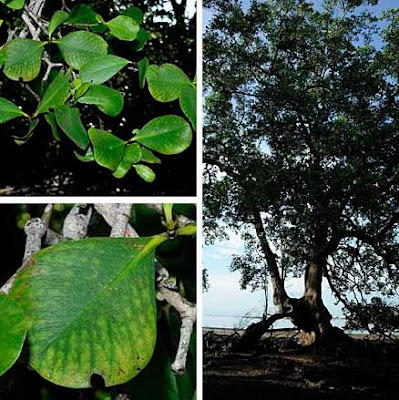 Similarly with the Perepat growing further south on this shore. I'm not sure what this means. 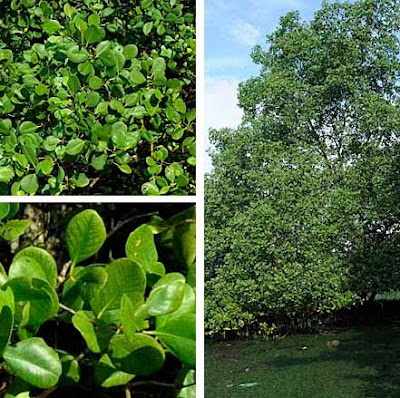 There were lots of signs of life on the sandy areas here. Crab holes and hermit crab tracks were everywhere. In the distance, lots of little fiddler crabs. 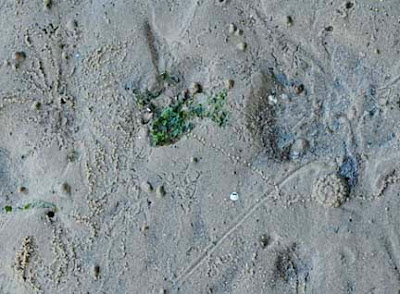 In pools in the sandy area here, there were lots of little gobies and little swimming crabs.

I saw two bristleworms in the pools, writhing. I don't think it's a cause for worry as I have seen this sort of thing before in the past. Perhaps the worms were pulled out by shorebirds? 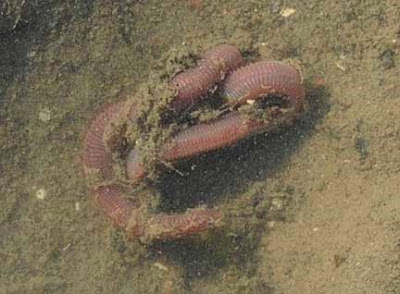 I did see one skeleton of a dead sea urchin. But this is probably normal and not a sign of death by oil spill. 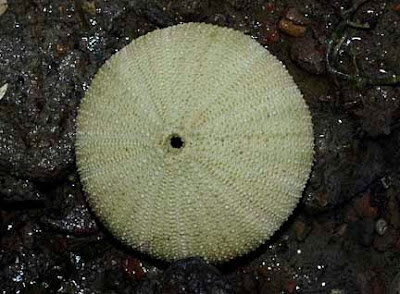 I only saw a few Carpet anemones (Stichodactyla haddoni) here. Two of them were bleached. These anemones harbour symbiotic algae that undergo photosynthesis and share the nutrients produced with the host anemone. When the anemone is stressed, it may lose its algae and thus its colour and appear pale or 'bleached'. This does not bode well for the 'bleached' anemone.

The other anemones I saw were not bleached.

The rocky low water areas near House No. 1 are carpeted in colonial anemones or zoanthids (Order Zoanthidea). They seemed to be alright. 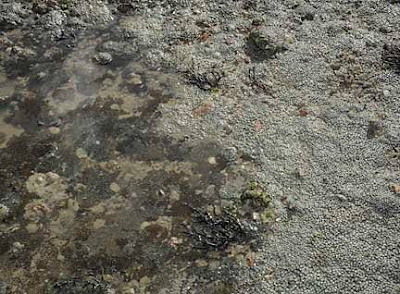 Other ascidians and anemones are also found in this zoanthid carpet. They seemed alright too.

I only saw a few sponges as the tide was rather high. The branching one didn't look too good. But there were many prickly ball sponges (Tethya robusta) and they seemed alright.

I didn't see any peacock anemones, although there were several living window pane clams in the seagrasses.

As I headed back, I notice the animals growing and living on the boardwalk legs seemed alright. 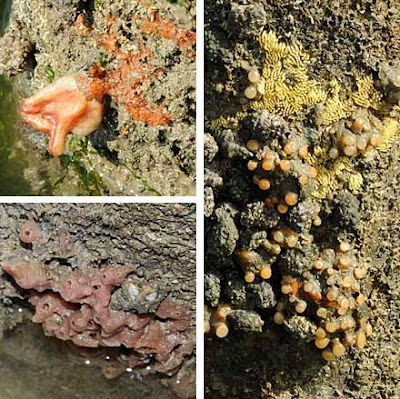 More healthy looking sponges and ascidians on the boardwalk legs.

There are lots of oysters on the boardwalk legs. 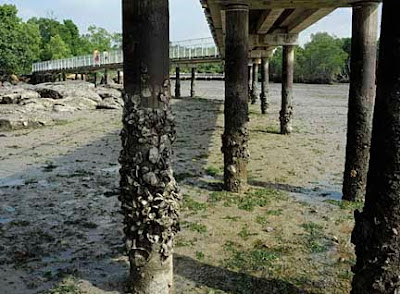 But I notice that most of them were dead. 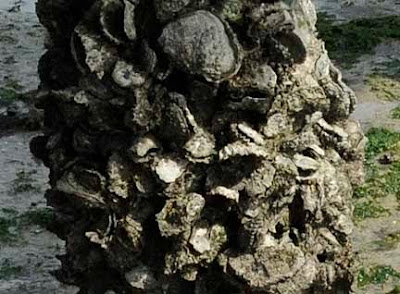 On the rocky shore near the boardwalk was this Carpet anemone in its normal colours. 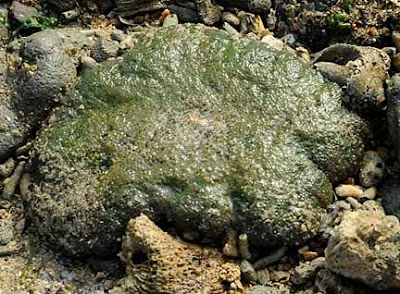 Towards the end as I head back to the Information Kiosk, I noticed a plant on the coastal forest had turned bright yellow. I don't know what plant it is and what this means. 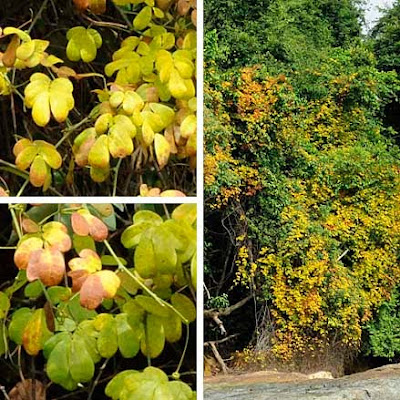 Oil spills are not the only threat to Chek Jawa. On the high shore, near the tracks made by wild boar foraging on the flotsam washed up at the high tide mark, there's lots of rubbish. 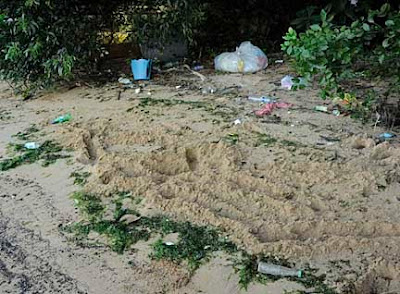 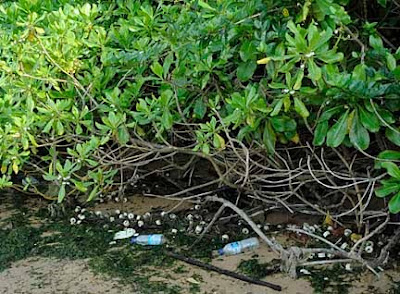 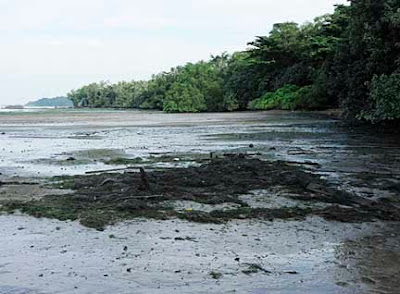 Yet more abandoned driftnets near the low water mark, just opposite Pulau Sekudu. 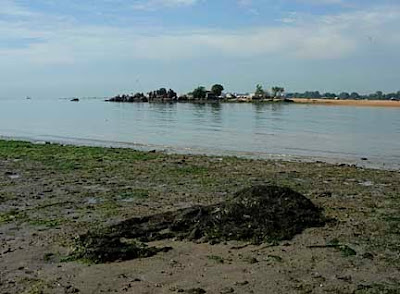 Off the shore, a man is gathering marine life, . In the distance, the first of a long row of floating fish farms off the southern shores of Pulau Ubin. 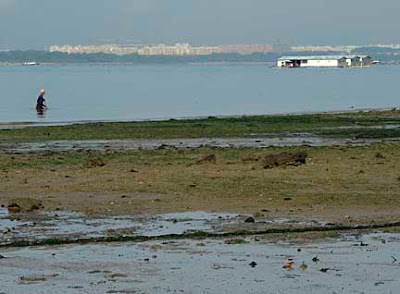 Chek Jawa is also along a major international shipping channel used by many large vessels, some of which may carry chemicals and other stuff that may also spill. 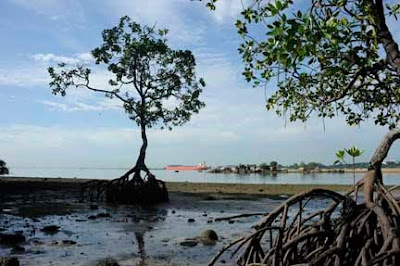 Here's a closer look at the large red vessel passing by Pulau Sekudu from Chek Jawa. 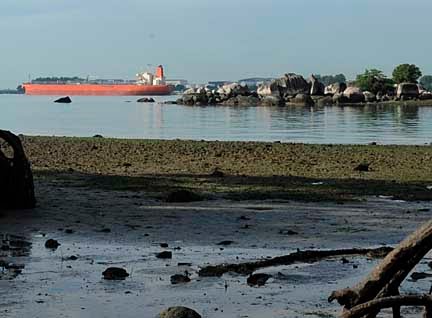 Let's hope Chek Jawa and Pulau Sekudu continue to hold out against all these threats.

See also posts by Andy and Chay Hoon who did the northern shores.

It's the last of a very long series of low tide trips. And washing up and drying all the TeamSeagrass gear seems a good way to end them. 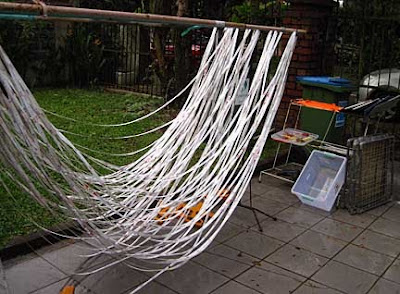 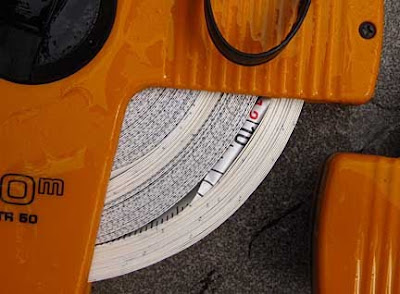 We now get a break, to catch up on sleep, photo processing and preparing for a huge series of nature guide training in July.

But there's too much happening to our precious shores to let up, and we will resume our documentation trips again next weekend.

Other checks on Chek Jawa after the oil spill: