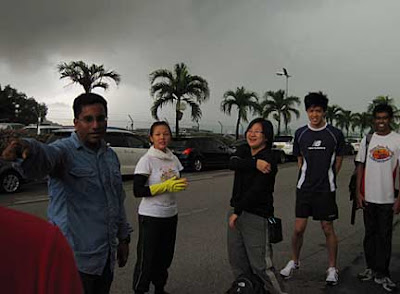 The objective is to remove oil-coated plastic trash on Tanah Merah. This stretch of 'motherless' shore, as aptly described by November, is not cleaned as regularly as well-patronised shores like East Coast Park. This is doubly tragic as there is probably more marine life at Tanah Merah shores.

Alas, just as we gathered together, the weather turned for the worst. With lightning, rain and high winds, we had to wait out the weather for an hour. 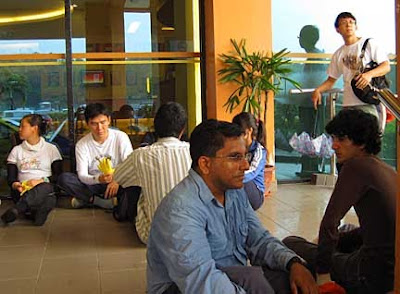 Finally, it eased up enough for us to make an attempt on the shore. The rain has flooded the access route! 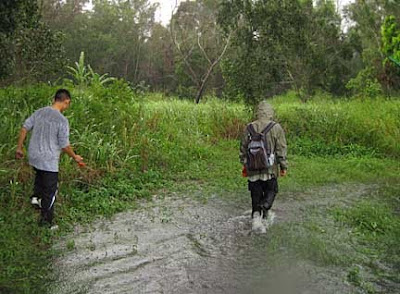 Today, it's not very low, but low enough to see the trash line on the high water mark. On the mid-water mark was a broad band of oil slick. This shore is very long, about 1km long. There is another shore beyond which is probably about 1.5km long. 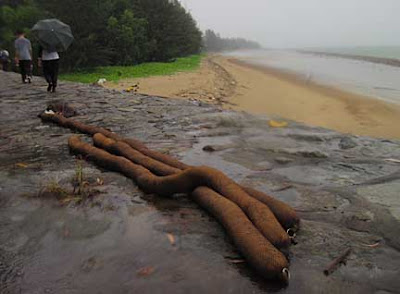 This is the typical plastic trash found on the high water mark on all our shores. We don't see this kind of trash on the East Coast, because armies of cleaners remove it well before sunrise, EVERY DAY. See what a trash survey on 22 May by International Coastal Cleanup turned up on the shores. 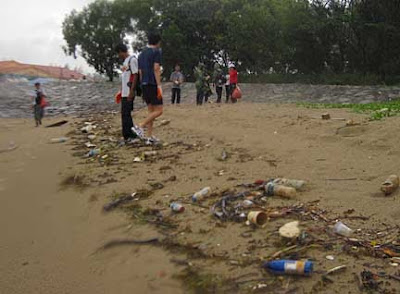 This is the kind trash load we get EVERY high tide EVERY day on all our shores -- it is a never ending slick of rubbish. With the oil spill, the non-biodegradable trash gets coated in crude and stays on the shore for a very very long time. 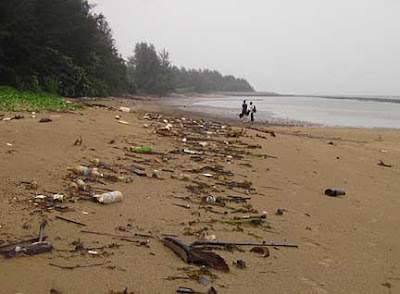 And because Tanah Merah is so seldom cleared of rubbish, this accumulates over the years. At the very highest water mark, so high that land plants are growing here, a pile of plastic and styrofoam has built up. 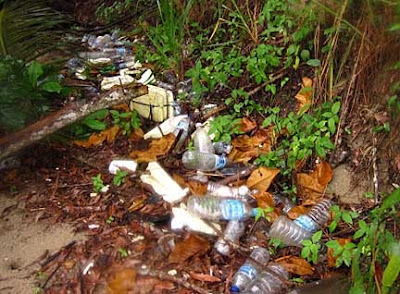 Even at this tide height, I saw plastic bottles coated in oil. 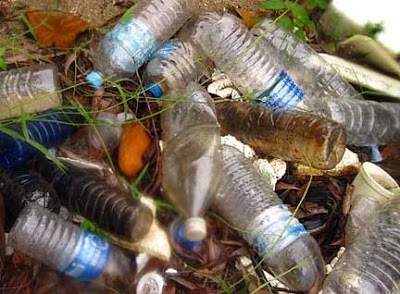 We get started on the endless task of picking up as much trash as we can. 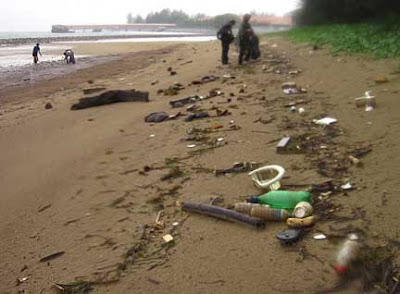 The most disconcerting trash is on the mid-water mark, a zone that is now coated in a layer of brown slick. Here, every piece of trash is coated in oil. The plastic oil-coated trash will probably remain there until it is removed. 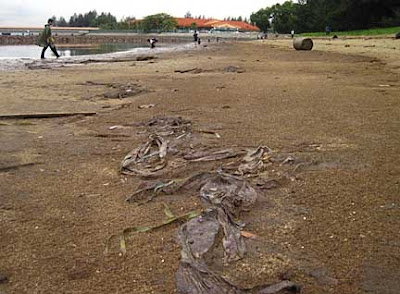 We found many large plastic sheeting and strips, long thick ropes and all manner of rubbish in this zone. Jason is tackling a humungous plastic sheet coated in oil. 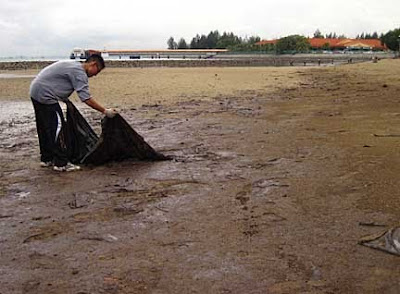 Here's one pile of oil-soaked plastic with my foot next to it for scale. 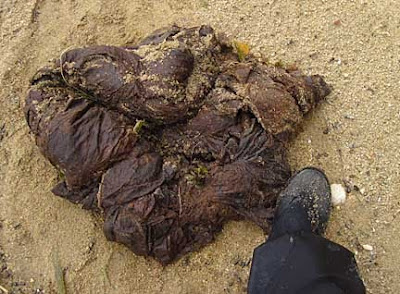 Among the plastic bags on the shore were many processed food packets: instant noodles, instant coffee. The brands don't seem local. 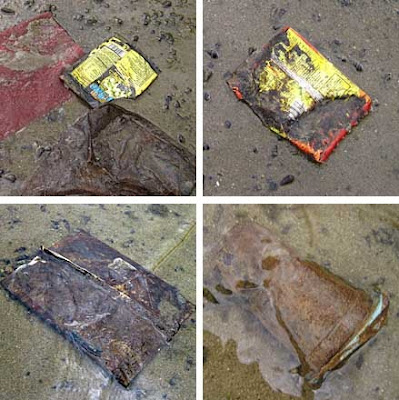 The oil also coats the seawalls. With shiny oiled rocks on the mid-water mark and below. Alas, this is where Kok Sheng saw the wonderful regenerating coral reef. We have yet to check on the reef as we need a good low tide to have a look at it. 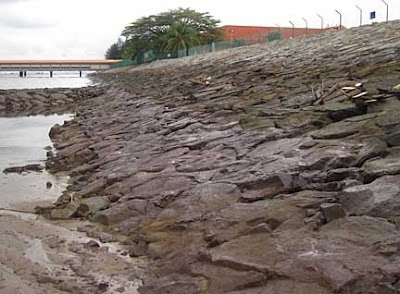 After picking up and bagging the trash, which is tricky to do in the wind and rain. And the petroleum smell is sometimes overpowering. We have to drag all the bags to the high shore. Fortunately, NEA is supporting this effort thanks to Andy's coordination. And they will be collecting and disposing of the bags. 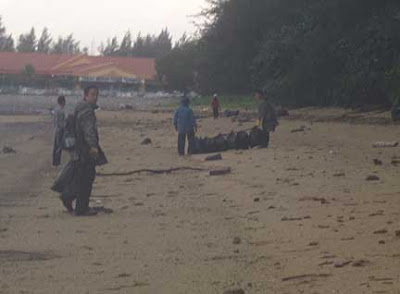 As the tide turned, I saw little balls of oil floating on the water, 'leaking' streaks of sheen. 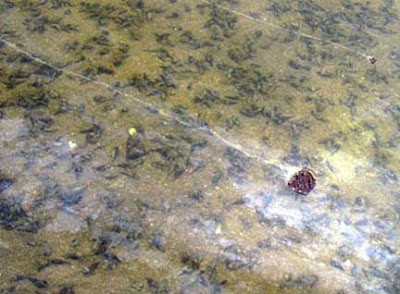 I had a brief look in the water and saw one dead Ghost crab and three dead peanut worms.

Alas, the patch of Smooth ribbon seagrass (Cymodocea rotundata) that we saw a few days earlier, today seems to be affected by the oil slick. 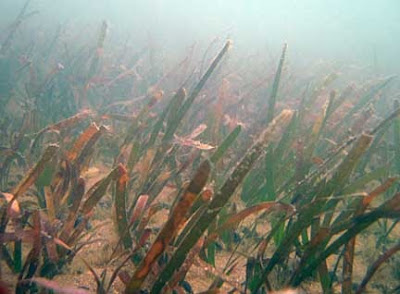 Many of the seagrass blades were no longer freshly green but were brown. Some looked like they had clumps of oil stuck to them. 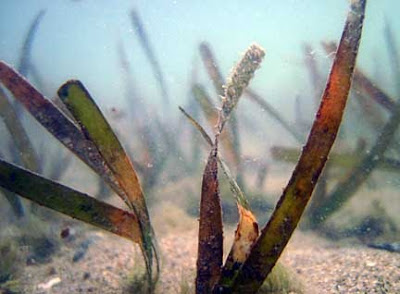 On the high water mark, a lot of seagrass blades were washed up. With many green blades of Tape seagrass (Enhalus acoroides). And amazingly, many green blades of the rare Noodle seagrass (Syringodium isoetifolium). I've seen this sort of collection of seagrasses washed up on East Coast Park as well. Do we have seagrass meadows off Tanah Merah and the East Coast? Have they been affected by the spill? There is so much we have yet to learn about our shores. 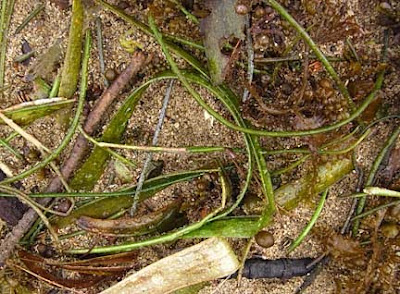 The high water mark is where baby mangroves wash up. Here are several rooting Api-api seedlings, with a long pimply Bakau seedling. Alas, this is also where oil-coated plastic ends up. It is like sprinkling crude oil in the baby nursery! 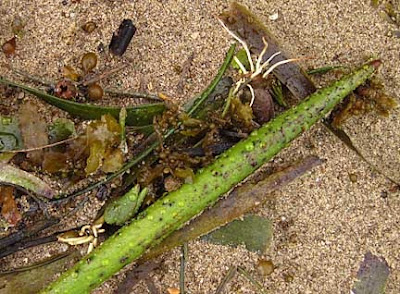 But it was heartening to see many signs of sand bubbler and soldier crabs on the shores, the little sand balls and burrows indicating where they are still alive and active. And the shores were still teeming with a bazillion Zoned horn snails (Batillaria zonalis). 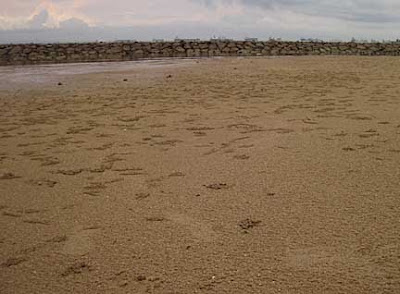 We soon ended mainly because we were dead tired and were running out of bags. While the rubbish is never ending, fortunately the bags to collect them in are finite. This small team of 19 collected more than 80 bags of trash in about 2 hours! 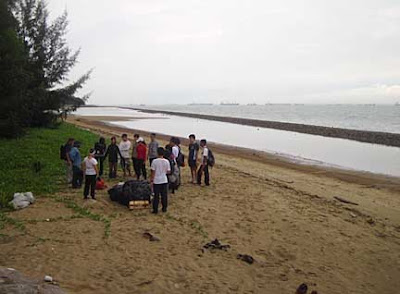 Thanks to Andy for organising the clean up and alerting NEA to the situation on these shores. While we were doing this stretch, many NEA contractors were cleaning up the separate areas nearby. NEA assured that they will clean up this shore more regularly. That is good to know!

There are many other orphaned, "out of sight, out of mind" shores like Tanah Merah. In fact, after our Tanah Merah clean up, Andy and Ng Kaiscene headed out to Seletar to do a recce for International Coastal Clean up there!

You CAN make a difference for these forgotten shores. Join International Coastal Cleanup Singapore!

More about marine litter. Here's some photos of the marvellous marine life that can be found on this shore.

Other posts about this effort: