What is being done about the oil spill? (29 May)

"Light staining of parts of" Changi Beach between Car Parks 1 to 4 was observed as of 10am today. 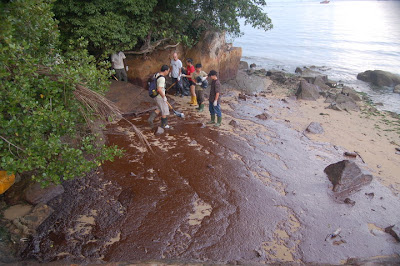 What is happening at Chek Jawa?
About 150m of shoreline around the boardwalk is showing patches of oil. There were no immediate signs of major damage to the Chek Jawa eco-system, but NParks is monitoring the situation closely.

Despite NParks putting up a 1km containment boom at Chek Jawa when the oil spill first occurred, oil could have gone over or under the boom because of waves and tides.

Oil absorbent booms and paddings were deployed at the parts affected yesterday. These have helped to keep the oil spill out of Chek Jawa.

Nparks says it is encouraged by the show of support from the public for Chek Jawa. Many people have asked if they could volunteer their help. However, given the fragility of the eco-system at Chek Jawa, NEA says its preference at this stage is to work with volunteers familiar with the area or those who have the necessary expertise.

In the meantime, Chek Jawa is still open to visitors, but guided walks have been suspend in the next two weeks for the agencies to monitor the situation better.

More photos and stories about what is happening on Chek Jawa on Andy's flickr, the Manta Blog and on the Oil Spill Facebook Page.

What is happening on the East Coast?
At East Coast Park, the oil-slicked sand had been largely cleared from the 7.2km of shoreline covered earlier this week. The 19.6 tonnes of contaminated sand that was shovelled up was sent to the Semakau landfill site.

Offshore, the MPA said, the largest oil slicks were dispersed, though smaller patches remain scattered along East Coast Park, moving towards or away from the shore with the tide.

Beyond the conventional methods, MPA experimented with imbiber beads which are usually used by the Singapore Civil Defence Force (SCDF) to clean up chemical spills on land. Imbiber beads are spherical plastic particles that absorb organic liquids. MPA said results have been encouraging and with support from SCDF, it is deploying more imbiber beads to supplement other efforts.

from the Straits Times 29 May 10.
MPA has also deployed lightweight shallow water booms and a harbour buster to collect and contain oil patches close to East Coast Park. Harbour buster is an oil spill collection system suitable for deployment in shallow waters.

According to the NEA CEO, containment booms and other dispersal measures are helping halt the spread of oil, but these are not foolproof, "We cannot contain 100 per cent of the oil spill out in the open ocean"

He added "Thus far, the environmental impact has been minimal. We hope it will stay that way. I understand the concerns of the environmental groups. On our part right now, the first priority we have is to make sure that the areas affected by the oil patches are cleaned up so that the public can continue to make use of these places. Our first priority is of course public safety, and public use of these areas, because these are very popular recreational areas." He added that most of the clean-up should be over by the weekend.

What is happening at Changi Carpark 7?
Sam went there and shared photos of what he saw on his Facebook. This is what he had to say:

After reading about the awful oil slick that reached our shores, I decided to head down to Changi Beach to take a look. The media did say that the crude had reached these parts of the shores, as well as Chek Jawa. And, after reading what Ria and Chay Hoon saw at Tanah Merah, I was expecting mayhem. ::

However, truth be told, Changi looked clean. Well, as in there were no huge patches of oil on the shores (but litter and all kinds of shit can still be found there...an abandoned fridge even!). There were also no mass die offs of animals like worms, crabs, fish or molluscs. Well, for now at least. ::

As dawn broke, I could clearly see more denizens of the sea. Sea urchins, various crab species, sea cucumbers, a few worm mounds. The sea grass meadows of spoon and fern sea grasses, thankfully, were not covered in muck and look lush as ever (though sedimentation and litter is always a problem). And I saw at least 7 pink sand dollars (Peronella lesueuri). Apparently, this is an uncommon species found south of Singapore but I did wonder whether they were feeling stressed out hence I could see so many of them. Saw quite a bit of clams above the sand so I reckon they were feeling unwell.

As it got brighter, I could see more signs of the slick. Those dispersants used to clear the crude? Well, what they do is create or form globules of oil and these either sink into the sea or wash up onto the shore. And yes, there were many globules found at Changi. Some groups of cleaning crew were there and have started clearing the crude from the high water mark (which could explain why I didn't see so much muck).

What is happening at Tanah Merah?
Ivan went to Tanah Merah and blogged about how the marine life is coping there.

What is happening elsewhere?
Indonesia's waters are clear of the spill and an Indonesian official said the oil spill would not affect Indonesia waters as the wind is currently blowing towards Singapore.

What caused the accident in the first place?
MPA said investigations into the accident are ongoing but early findings indicate that weather conditions were clear and traffic was light along the commercial strip at the time of collision.

Other comments in the media
In an editorial, the Straits Times said: "Environmentalists fretted about the impact on marine wildlife" adding that "environmental damage is unlikely to be significant, as the affected area is largely made up of reclaimed land, sea walls and canals." It was remarked that "the state's well-oiled systems were promptly activated to contain the effects of the spill" and spoke about how "People living in flats near highways should accept the dust and noise pollution."
Posted by Ria Tan at 7:00 PM