Clinging on at Tanah Merah

Not everything on Tanah Merah is dead (yet?). 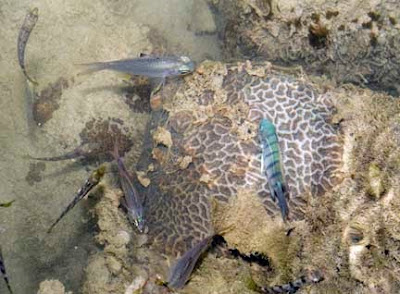 Although it is a reclaimed shore with man-made seawalls, a reef has slowly settled here over the 10 years or so since the reclamation. Full of hard corals and reef fishes!

On the rocks, the oil slick seems to be mainly on the high water mark. The hard corals are well below where the slick has accumulated. However, the water is brown with slick and the corals are sitting in this water.

Most of the corals seem alright (not bleached) although many were producing lots of mucus, which is how they get rid of nasty stuff from off themselves.

The hard corals here are colourful and some are quite large. 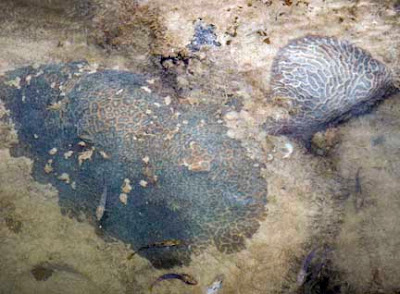 Many colonies growing next to one another.

There is a wide variety of hard corals here, with many Pore corals (Porites sp.).

And even rarey corals such as this Bracket hard coral (probably some kind of Family Fungiidae). 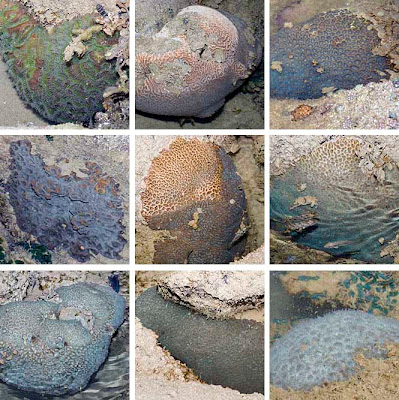 Beneath a sheen of oil on the water surface, a Cauliflower coral (Pocillopora sp.). 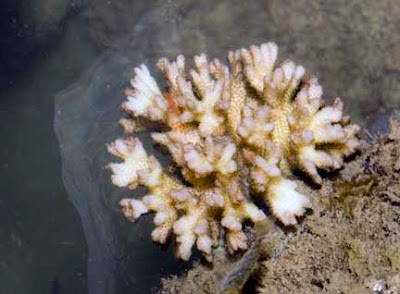 Inside the coral, a tiny crab that often lives in such corals. Many animals depend on corals and when the corals get sick or die, these creatures also suffer. Today, however, only a few of the hard corals were bleached. Bleaching occurs when corals are stressed. Bleached coral become weak and may get sick and die. 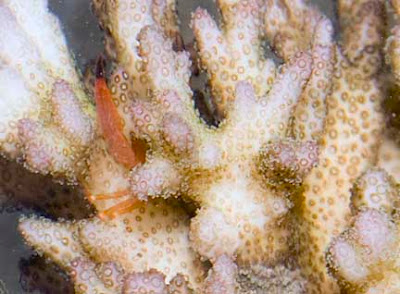 Tanah Merah is usually full of reef fishes. Today, the fishes are still plentiful. I still saw many of the wonderful colourful fishes that we commonly see on this shore. These fishes are generally associated with reefs. 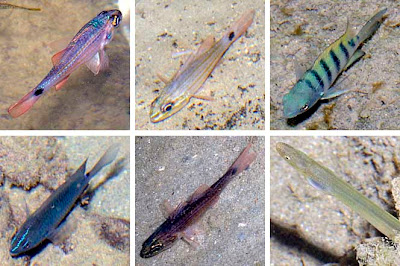 As well as some familiar favourites: the Whitings (Family Sillaginidae) and filefishes (Family Monacanthidae) except for the rightmost fish which I'm not sure of its identity.

Some fishes are hard to spot, but I still saw a few of them: the False scorpionfish (Centrogenys vaigiensis) is actually a grouper! The Painted scorpionfish (Parascorpaena picta). Today I saw some of the largest Schaap's dragonets (Callionymus schaapii) I've seen before.

Tanah Merah has lots of groupers, which attracts anglers to this shore. This Chocolate hind (Cephalopholus boenak) is very commonly seen at Tanah Merah. Today, they were not well hidden as they usually are.

This too seems to be a grouper, though I've not seen one like this on Tanah Merah before.

As well as other large fishes: The Spotted scat (Scatophagus argus) is sometimes caught for eating. And there were many large Eel-tailed catfishes (Plotosus sp.), an unusual sight.

Many of the fishes were less shy today and not well hidden. Perhaps the tainted water has made them confused, or oxygen levels are low because of the layer of oil? 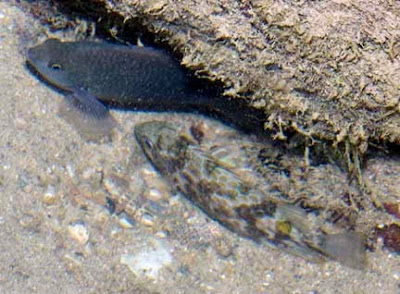 Many fishes of all sizes and all kinds were gathered distressed in shallow pools. But not many were dead (yet?). Certainly, I didn't see as many dead fish as I did at Pasir Ris during the mass fish death there. 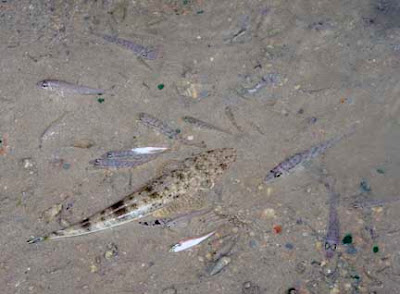 There were large numbers of these Rabbitfishes (Family Siganidae) schooling in the water. I have never seen this at Tanah Merah or any other shore. These were following my torch very closely. "I'm apologise on behalf of all humans for causing you distress!!" I try to tell the bewildered fishes. 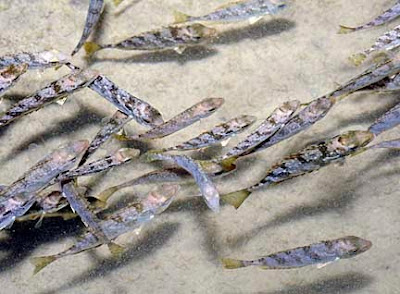 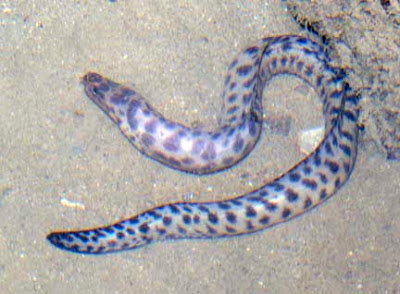 Although there were many dead moon crabs, I saw several other crabs that were still alive: The Red egg crab (Atergatis integerrimus), Floral egg crab (Atergatis floridus) and many different kinds of swimming crabs (Family Portunidae). The shrimps, however, didn't seem to be doing as well.

The Spotted hermit crab (Dardanus sp.) is not commonly seen elsewhere and Tanah Merah is probably the only mainland shore where we might have a good chance of seeing it. Tiny hermit crabs were huddled together in large heaps everywhere.

The zoanthids are all clenched up. Lots of little gobies everywhere. 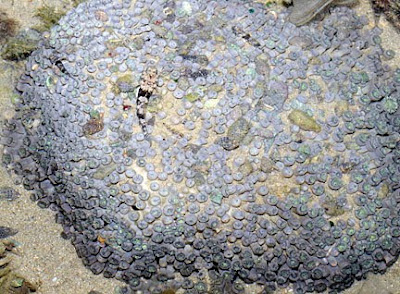 My first time seeing the Slender sea pen (Virgularia sp.) on Tanah Merah. Alas, with slick accumulating around it on the water surface. I saw one Haddon's sea anemone (Stichodactyla haddoni) and it wasn't bleaching.

For the first time on Tanah Merah, I saw this strange 'Bobbit worm'. It was good to see signs of the Acorn worms. Though not as plentiful as usual. 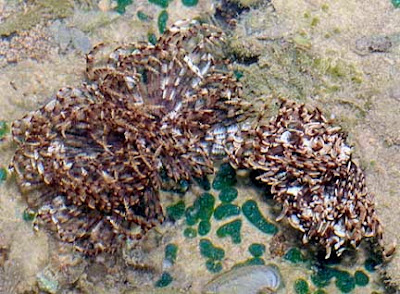 A rare encounter with an Olive snail (Family Olividae) on Tanah Merah. The whelks (Family Nassaridae) seem to be still quite lively. And I saw some living Nerite snails (Family Neritidae) and moon snails (Family Naticidae).

My first time encountering this strange worm. I saw at least four of them. They looked distressed. 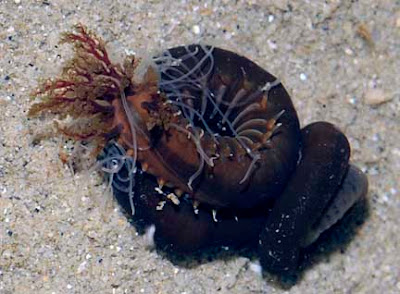 Tanah Merah is a great shore for echinoderms. While the Common sea stars (Archaster typicus) were still plentiful, they did not seem to be doing very well with the oil slick. 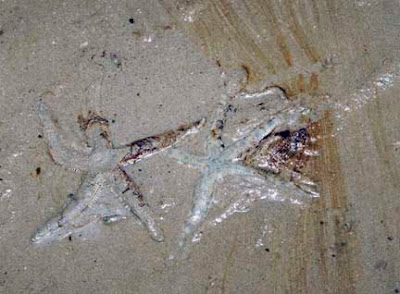 So far, I've only seen the Durian sea cucumber (Stichopus horrens) on Pulau Semakau and on Tanah Merah. And I saw one today! 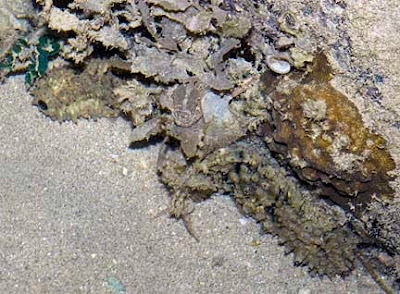 Other sea cucumbers seen was a very stressed looking Big synaptid sea cucumber (Family Synaptidae). And Chay Hoon found this strange sea cucumber. It is a familiar sea cucumber that has been stressed out of proportion? Or a kind we've not seen before?

Today, I saw many large brittle stars on Tanah Merah, a first. These animals are usually very well hidden.

A bitter-sweet first time encounter with a heart urchin on the mainland! I saw two of them today. These animals are usually buried and were probably emerging above ground because they were distressed. It is probably the Oval maretia heart urchin (Maretia ovata).

It was heartbreaking to see the stress being put on this wonderful shore and its remarkable residents. Here's some of the dead or dying animals I saw today. I sense that the death toll will rise over the next few days and that we may not see these animals again for a long long time.

With the coming low spring tides, will the low water levels add stress to the animals? Or with the super high water help to flush things? I have no idea but will hope for the best.

Unfortunately, we are scheduled for Southern trips the rest of the low tide period. But other friends are going to make visits on this shore and we hope to hear from them how things are going there.

Some previous trips to Tanah Merah in happier times.
Posted by Ria Tan at 2:37 PM