Sex in the Sea: Singapore style 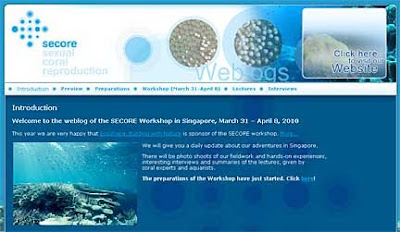 Thanks to blog posts by Jun and Abby, I've learnt about the gathering of experts for the innocuously titled SECORE Workshop in Singapore (31 Mar- 8 Apr 2010).

Why is this exciting?

Well, it's just awesome thinking of all that sex going on at the same time. Abby describes it as "like reverse snow. The little bundles of pink eggs and sperm are released from different colonies of coral roughly around the same time and before you know it, you’re caught in a blizzard, except it’s coming from below you and floating to the surface."

It's also an opportunity to study and learn about coral reproduction. So that we can better preserve our reefs.

From their website, SECORE (SExual COral REproduction) is a non-profit initiative of public aquariums and coral scientists to create an international network of expertise in coral reef conservation. SECORE is active in coral breeding, sustainability, reef restoration, population genetics or cryopreservation. This unique approach has led to significant success in the conservation of endangered coral species. Our members have been successful in raising coral colonies of several broadcast spawning species, among which the threatened Elkhorn coral (Acropora palmata). In recent years this Caribbean species is seriously in danger since field populations have declined over 90 percent throughout their range.

What is coral mass spawning?
Some corals, release their eggs and sperm all the same time. Called broadcast spawners, these mass spawning events usually occur once a year, a few nights after full moon. The eggs and sperm drift to the water surface where fertilization occurs. After a few days, the embryos will have developed into coral larvae that drift about and eventually settle down to form new corals. 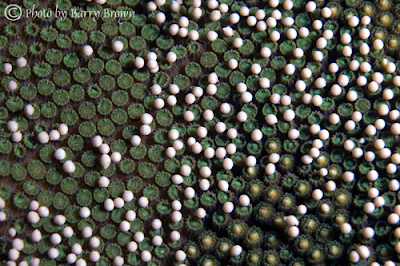 A spawning hard coral, from the SECORE website.
What will be done during the mass spawning?
From their website, SECORE uses specially designed nets for collecting gametes from spawning corals in a non-invasive way. The donor colonies and surrounding reef structure are not disturbed. 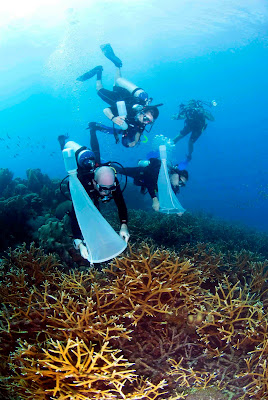 A photo of collection of eggs and sperm from the SECORE website. I've always been struck at how the collection devices resemble giant condoms!

Fertilization of the eggs is carried out in the laboratory, as well as raising the coral embryos to the larval stage. The methods used seem to be very successful; only a fraction of the gametes released by a handful of coral colonies may result in the culturing of one million larvae.

To find out what's happening during our coral spawning, check out these blogs which will be sharing the sexy goings on with our hard corals!