It's official! Ceriops zippeliana is a new record of mangrove species in Singapore!

Dr John Yong shared his fabulous paper which has lots of exciting details!

The paper by Dr John and his colleagues provides great photos and a key to the two different kinds of Ceriops species in our mangroves. The easiest way to tell them apart is to look at the 'ripe' propagule (long bean-like thing that is actually a seedling and not a fruit). The propagule of Ceriops tagal has a white collar. While that of Ceriops zippeliana has a red collar. There are also other differences. Something I learnt from the paper is that pollen is released explosively in Ceriops tagal, but not in Ceriops zippeliana! 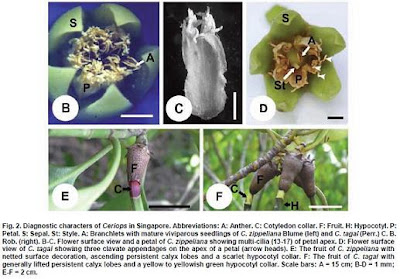 Another interesting finding of the paper is that Ceriops tagal is rarer in Singapore, than Ceriops zippeliana!

Thus, the authors suggest, special attention for conservation should be focused on Ceriops tagal and a further survey of this genus would provide valuable information to better manage Singapore’s mangrove plant biodiversity.

Here is the prettiest Ceriops tagal that I've seen. It grows on Pulau Semakau.
The discovery of Ceriops zippeliana is important as it shows that despite the significant decrease of mangrove land area from 13% in 1820’s to only 0.5% in 1993 and the loss of seven mangrove species, a further extensive study of the mangrove ecosystem in Singapore (especially the offshore islands) is still warranted.

In fact, Ceriops zippeliana was discovered by the authors along the boardwalk at Pasir Ris Park! Wow! This gives us great motivation to take a closer look at even our 'common' mangroves.

Dr John was also involved in the earlier paper that distinguished Ceriops zippeliana from Ceriops decandra!

And Dr John was also involved in the paper reporting the new record of Bruguiera hainesii and rediscovery of an extinct species, Bruguiera sexangula in the mangroves of Singapore. This paper also provides valuable keys and photos to help identify all the five Bruguiera species in Singapore.

Both plants are listed as 'Critically Endangered' and are being replanted at our mangroves such as Sungei Buloh, Chek Jawa and Pasir Ris Park.

Bruguiera hainesii is rare in Singapore, with only a few known specimens; at Pasir Ris and Pulau Ubin. Here's one of the magnificent wild trees at Pulau Ubin.

Bruguiera sexangula is also rare, with two on Pulau Tekong, and two at Sungei Buloh. Here's one that was replanted at Pasir Ris Park.

Dr John Yong not only knows a great deal about mangroves (from Singapore and around the world) but also generously shares of his knowledge. See his wonderful Comparative Guidesheets to mangroves as well as mistletoes and ferns, which are so invaluable to all mangrove maniacs. Thank you Dr John!

Here's links to the papers:

The Bruguiera (Rhizophoraceae) Species in the Mangroves of Singapore, Especially on the New Record and the Rediscovery Chiou-Rong Sheue, Jean W. H. Yong and Yuen- Po Yang; Taiwania, 50(4): 251-260, 2005 A copy on the RMBR website (pdf)
Posted by Ria Tan at 1:27 PM