It's a moody evening as we head out for a stretch of sandy, reclaimed shore at Tanah Merah. What could we possibly see here? 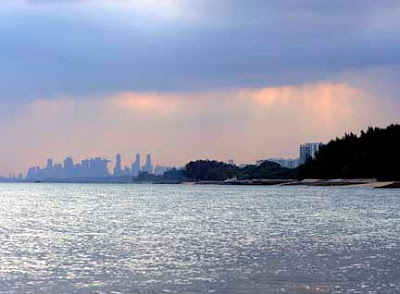 Like striking the lottery, there's dollars ... probably a million dollars!

SAND dollars that is. In some parts, the shore was so thick with Cake sand dollars (Arachnoides placenta) that we had to avoid walking those spots. Like many sand dwellers, sand dollars are usually buried just beneath the surface, leaving typical spots and patterns on the sand. 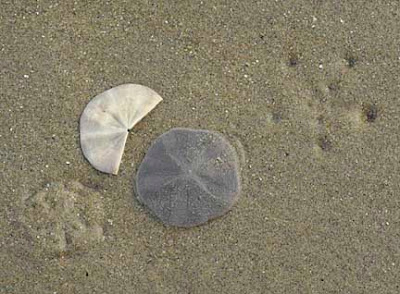 Most people are surprised to learn that these flat disks are living animals! How do we tell if a sand dollar is dead or alive? Living sand dollars have a coat of fine spines (right most photo) while dead skeletons are smooth. While older skeletons are usually bleached white (left most), the skeletons of recently dead dollars may still have colour (middle). 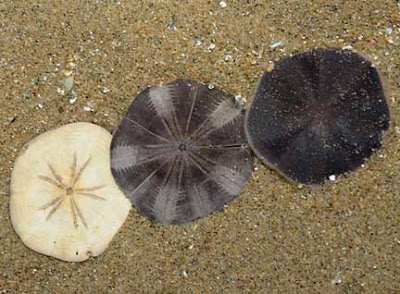 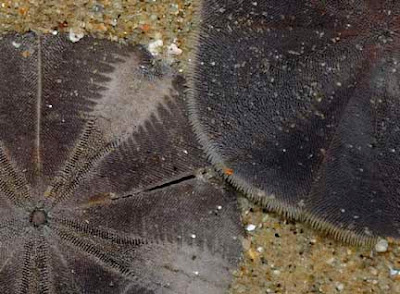 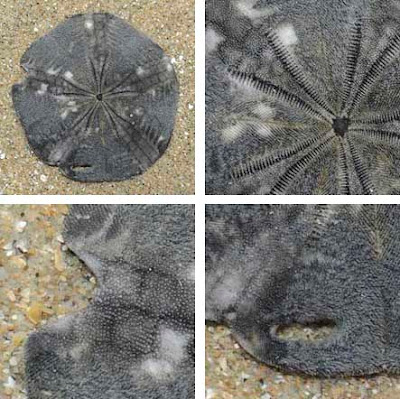 This shore is also riddled with gems and jewels! Delicately beautiful, tiny glossy snails. In Chek Jawa, the guides used to call them the "Jewels of Chek Jawa". They come in a bewildering variety of shell patterns and colours and it is said, no two shells are alike! 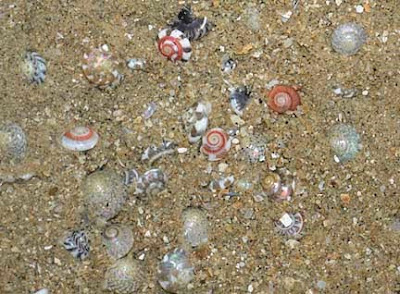 These Button snails (Umbonium vestiarum) also live just beneath the surface. They have a really cute 'face' with tiny eyes on stalks, banded tentacles and a frilly siphon to breathe with while they are buried. 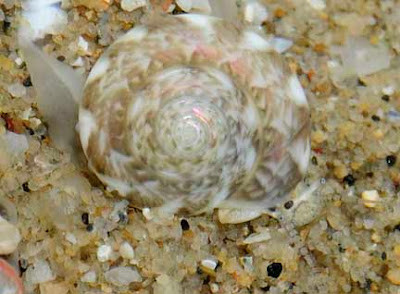 They also have a large long leaf-like foot which seem to have tentacles along the edges. It is probably this large and mobile foot that helps them to leap several body lengths away, as well as to burrow rapidly into the sand. 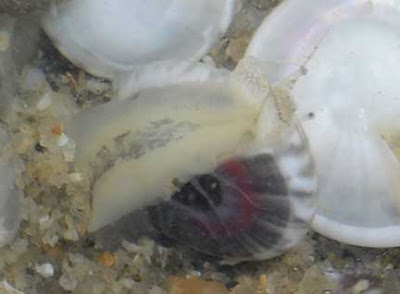 This is a life-saving skill as these little snails are preyed upon by burrowing Moon snails. Here's a photo of little Button snails leaping and rapidly crawling away from a big Moon snail (Polinices didyma) bulldozing just beneath the sand! Button snails also float on the water surface, which is probably another quick way for them to escape from danger when they are submerged. 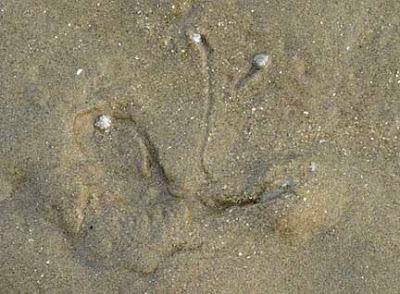 Another burrower is the Olive snail (Family Olividae), with a broad long foot and a long siphon that stick out like a snorkle as it creeps at the sand surface. I'm not sure what this snail eats. We saw a few of them, and usually do spot them on shores with fine clean sand. 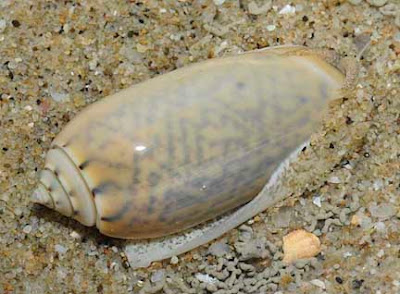 Another intriguing burrowing snail I saw was this Melongena snail (Family Melongenidae). All those I saw were buried with the pointy end of the shell angled up to the surface, creating a tiny hole in the sand surface.

When the snails die, their shells become valuable real estate for hermit crabs! Here's a huddle of hermits of various kinds and sizes possibly gathered around a newly vacated snail. Soon, they will probably engage in the Great Hermit Musical Shells exchange. 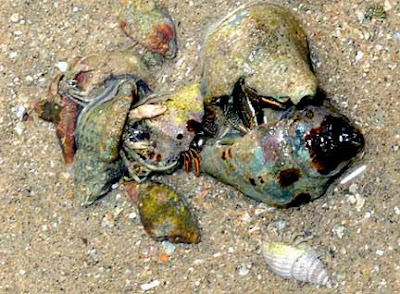 Kok Sheng showed us this strange empty shell. I'm not sure what it is. We saw something similar at Tuas and a reader suggested it is the Sunburst carrier. Indeed our snail shell does look like the photo of Stellaria solaris from www.gastropods.com.

I didn't see any sea anemones except for one shy tiny Peachia sea anemone (Peachia sp.). The tiny shells of dead snails and bivalves are incorporated into the tubes of worms!

At the water's edge, drifts of Sea lettuce seaweed (Ulva sp.) had built up. This provides more food and shelter for different kinds of animals. Like this tiny shrimp. 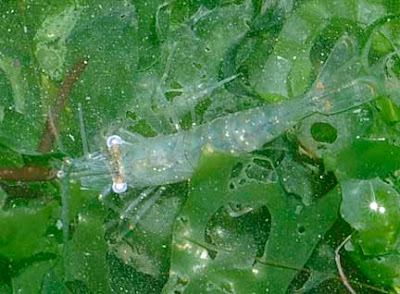 And these odd organisms. I'm not sure if they are eggs or something else.

And creeping slowly in this green maze were really tiny Dubious nerites (Clithon oualaniensis). In these snails too, it is said no two snails have identical shell patterns. 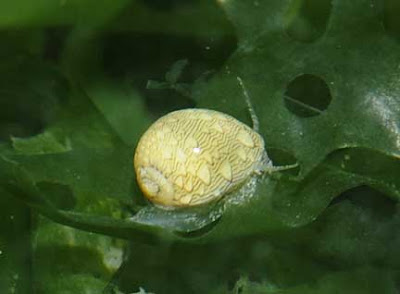 Of course Chay Hoon can be trusted to find the spectacular nudis on any shore, no matter how barren they might seem. On a large and rather beat up Sea fan seaweed (Avrainvillea sp.), she found a bunch of tiny Costasiella nudis (Costasiella sp.) that are found on this seaweed. 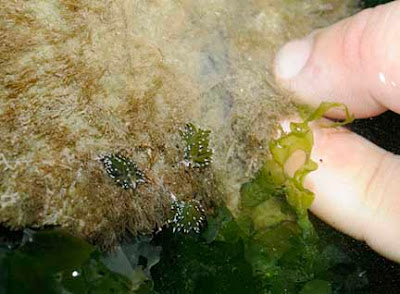 These slugs are really tiny! Everyone else got much better photos than I. See their posts (links below) for a look at the cute faces of these slugs! 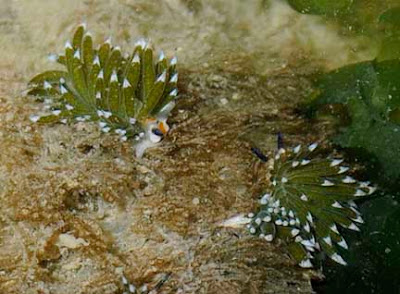 As the tide turned and the sun set, the fishes started coming in with the rising waters! These pale fishes may seem similar but are actually different: (from left) Whiting (Family Sillagenidae), Glass perchlet (Family Chandidae), Silverside (Atherinomorus duodecimalis).

Lots of Spotted moon crabs (Matuta lunaris) popped out of the sand into the clear water! 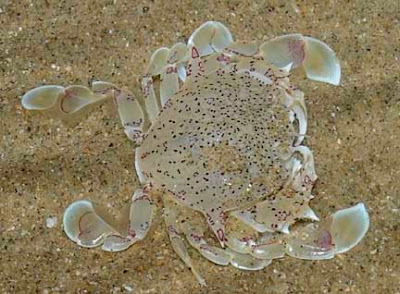 James showed us the Gold spotted mudskippers (Periophthalmus chrysospilos) playing at the water's edge as the tide came rushing in. 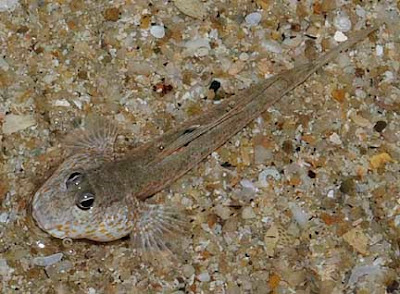 The most exciting find turned up as we were about to leave. It was a little cuttlefish. 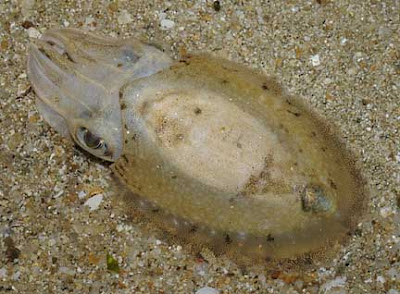 It changed colours rapidly, but remained mostly pale, probably in an attempt to match the sand. 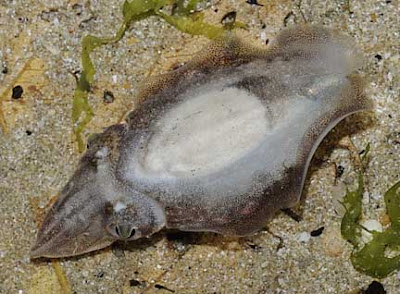 It made a loud, startling sound! I have been told that the Malays call some cuttlefishes 'sotong katak' or 'frog cuttlefish' probably because of the croaking sound they make when they are alarmed.

We are very glad for a safe trip to this shore. Because we earlier learnt that one of the shore researchers recently accidentally stepped on a stonefish here!

It seems we really need to be careful on ALL our shores! Even sandy shores such as this one.