Eye and Tooth of Urchin

The entire sea urchin could be one giant compound eye! Light sensitive molecules on their tube feet and spines might help them actually form an image. This is interesting because robots are now often designed more like invertebrates than vertebrates. Instead of a powerful central processing unit, robots with a distributed system of many little processors, simpler sensor and simple rules could undertake complicated behaviors. 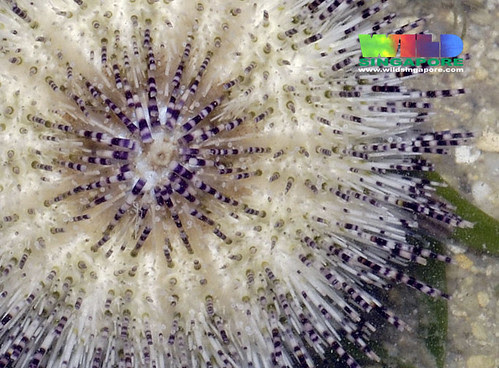 The White sea urchin (Salmacis sp.) is sometimes commonly seen on our shores. In sea urchins, the mouth and teeth are on the underside.
While the sea urchin's tooth is sort of like a giant crystal! Although made of calcium, the tooth is hard enough to be used by some urchins to grind hidey holes in rock. The process of tooth formation almost seems magical: a mud-like (amorphous) form of calcium carbonate is shaped. Water is removed and the calcium carbonate then crystalizes with "crystallinity propagating through the amorphous material, one nanoparticle at a time".

Sea urchins may use the whole surface of their bodies as compound eyes, scientists now suggest.

Although sea urchins don't have any problems avoiding predators or finding comfortable dark corners to hide in, they don't have eyes. The question then is how they see.

Genetic analysis of sea urchins has revealed they have light-sensitive molecules, mostly in their tube feet and in tiny stalked appendages found in among their spines. As such, "it looks like the entire surface of their bodies are acting as one big eye," said researcher Sönke Johnsen, a marine biologist at Duke University.

Scientists had conjectured the spines of sea urchins might then help them pick out relatively fine visual details by screening out light from off angles. If this proved true, urchins with densely packed spines would have relatively sharp vision.

To investigate that possibility, Johnsen and his colleagues experimented with California purple sea urchins (Strongylocentrotus purpuratus), testing how 39 specimens placed in a brightly lit 4-foot-wide (1.2 m) arena responded to a black disc on the wall.

When the disc was nearly 2.5 inches wide (6 cm), the urchins seemed oblivious to the disc. However, when it was roughly 3.5 inches wide (9 cm), they reacted strongly, with roughly two-thirds racing toward it and the other third fleeing in the opposite direction. These diametrically opposed responses might reflect whether the urchins saw the disc as a shelter or predator.

"To say they 'raced' toward the discs is relative - watching these guys move is like watching paint dry," Johnsen said.

In any case, the California purple sea urchin's vision seems roughly as good as nautiluses and horseshoe crabs, and much better than urchins Echinometra lucunter and Echinometra viridis, which have more sparsely packed spines.

"We think of animals that have a head with centralized nervous systems and all their sense organs on top as being the ones capable of sophisticated behavior, but we're finding more and more some animals can do pretty complex behaviors using a completely different style," Johnsen said.

The way that urchins apparently carry out eyesight and brainwork reflect how scientists are now often designing robots - more like invertebrates than we vertebrates.

"In the beginning, people built robots like they would humans, with powerful central processing units, complex sensors and fairly complex rules for doing things," Johnsen said. "Now they're finding it might be a lot better with a distributed system with many little processors and simpler sensors and simple rules, which end up creating fairly complicated behaviors as emergent properties, just as how a flock of birds can make intricate patterns without any one bird choosing these patterns."

The researchers are quite curious as to why these urchins choose to race either to or from objects. "Are there urchins that always run away or run towards them? Do we have timid or bold urchins? Or is it just something specific to how an urchin feels at a certain time?" Johnsen wondered.

Although experiments that clip spines off urchins would seem to make sense if one wanted to directly test how they contributed to vision, "we can't just remove spines - if we do, they get very sick and die, and don't behave naturally at all," Johnsen explained.

Other experiments could involve testing light objects on dark backgrounds, or if they respond to color. "It could be that they move towards green objects since they look like algae, which they really like to eat," Johnsen conjectured.

Johnsen and his colleague Divya Yerramilli will detail their findings online December 28 in the Journal of Experimental Biology.

Some of the most common minerals in biology, including those in bones and shells, have a mysterious structure: Their crystals are positioned in the same orientation, making them behave as one giant crystal, even though they do not look like a faceted crystal.

It's as if grains of salt were spilled on a rug, yet instead of landing randomly, all wound up with exactly the same angle and rotation.

In a new study in the Journal of the American Chemical Society, Pupa Gilbert, a professor of physics at the University of Wisconsin-Madison, has explained this seemingly miraculous feat of nature.

Gilbert and colleagues, including postdoctoral researcher Christopher Killian and biomineral expert Joanna Aizenberg of Harvard University, studied the tooth of the purple sea urchin. Gilbert adds that the same process may occur in mollusk shells and in the bones and teeth of vertebrate animals.

"Many of these biominerals are highly co-oriented," Gilbert says. "If you look at the nanometer scale, the crystals share a single orientation. But they are separate from each other, which raises an interesting question: How do they orient, how do they come to behave as if they were single crystals?"

The sea urchin is a common marine animal that eats algae and small animals and lives in tide pools or shallow water. Urchins use their five long teeth to grind away rock to make a shallow pocket where they can live protected behind a wreath of sharp, bony spines.

Gilbert's fascination with the urchin's tooth follows a long tradition: Aristotle, the Greek naturalist and philosopher, wrote about the urchin in about 343 BC. Indeed, the teeth are held in a "jaw" called "Aristotle's lantern."

The crystal in an urchin's tooth originates as a powdery, wet, "amorphous" form of the common mineral calcium carbonate, the major constituent of limestone.

As Gilbert studied the teeth using a high-resolution X-ray microscope, she identified how crystallinity propagates through the forming sea urchin tooth.

To understand how a shapeless material is converted into a hard, complex structure made from a single crystal, Gilbert suggests imagining "a structure built of mud, in this case, wet amorphous calcium carbonate. You can shape it any way you want, then remove the water, and finally let crystallinity propagate through the amorphous material, one nanoparticle at a time. While building biominerals, the animal harnesses chemistry and physics to produce the forms we see."

The transformation results in a single large crystal with "the exact same organization and orientation in different locations," says Gilbert. "One material grows into another, the crystal into the amorphous; it's a solid-state transformation, with no transport, no gaining or losing of water."

Calcite, the resulting crystal, is tough enough to grind away limestone or sandstone under the sea urchin.

Gilbert suggests the same process may account for a variety of biological minerals. Co-oriented crystals occur in shells, teeth, coral, eggshells, pearls and the magnetic grains that homing pigeons use to sense Earth's magnetic field, she says.

Animal bones provide an important example of co-oriented crystals, she adds. "Why does a bone look so complicated at the microscopic scale? Because it starts from an amorphous precursor mineral and then is crystallized. This was brilliantly shown by Julia Mahamid in 2008." Lia Addadi and Steve Weiner of Israel's Weizmann Institute of Science pioneered the study of biominerals, she adds.

A better understanding of how bone forms could be helpful in the struggle to control the bone-thinning disease osteoporosis.

Large, expensive single crystals are used in many solar panels that make electricity, Gilbert says. "Maybe they could start from an amorphous precursor and propagate crystallinity through that. Maybe one day we will have solar panels inspired by the lowly sea urchin."

Evolution has crafted a clever means of forming hard, complicated crystals, yet the control mechanism remains to be explored. "Organisms are really good at keeping things amorphous as long as necessary to change them into their final shape," says Gilbert. "Crystallization before the material is ready would be detrimental."

Gilbert, who has spent years exploring how organisms make mineral structures, still expresses wonderment at the biological solution she has observed. "The plates in a sea urchin tooth grow far away from each other, so how do all these plates form crystals that are exactly in the same register, to fractions of a degree? Now we know how: they have bridges connecting all the plates. The bridges look exactly like Roman bridges, with long decks, and arched piers."

Early in the life of a sea urchin, she says, one tiny crystal forms, "and the same crystal keeps growing through bridge-connected plates in the continuously forming tooth, throughout the 60-year lifetime of the urchin."