More than 1,000 dead fish were found washed up on Pasir Ris beach on Saturday, according to the Straits Times. 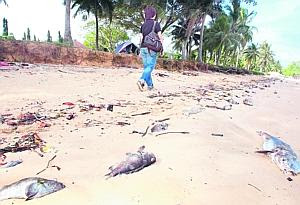 PHOTO: SHIN MIN
According to the Agri-Food and Veterinary Authority (AVA) this was probably "due to high levels of plankton, the result of heavy rain. Decomposing plankton can lead to oxygen starvation in the water".

The fish were mostly tiger garoupas from nearby fish farms.

The National Environment Agency has conducted checks in the vicinity and found no trace of an oil spill or chemical discharge into the sea.

I did see one large dead fish floating on the waters near Changi on the way home from guiding at Pulau Ubin on Saturday. The water was also very brown, the colour of strong tea. And I also noticed much broken Ribbon seagrass blades floating at Chek Jawa, which might also be a response to excessive freshwater.
Posted by Ria Tan at 9:18 AM