"I could tell that the octopus, busy manipulating coconut shells, was up to something, but I never expected it would pick up the stacked shells and run away. It was an extremely comical sight -- I have never laughed so hard underwater." said the scientist who first reported this unique octopus behaviour. 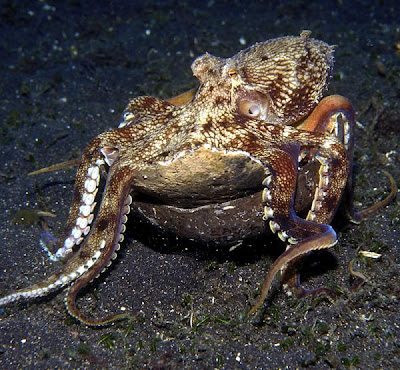 When the octopuses feel threatened, they flip the half shells over themselves and hide. Some even use two shells to create a more spacious shelter with an opening through which they can keep a lookout. 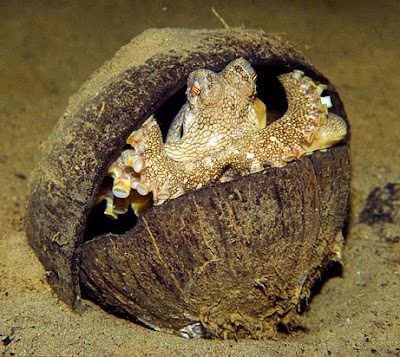 Jeff shares some of his personal observations on this and other fascinating marine invertebrate behaviour on his Compressed air junkie blog.

And here's a video clip of the behaviour, from National Geographic News.


Coconut-Carrying Octopus: Tool Use in an Invertebrate
ScienceDaily 14 Dec 09;

Scientists once thought of tool use as a defining feature of humans. That's until examples of tool use came in from other primates, along with birds and an array of other mammals. Now, a report in the December 14th issue of Current Biology, a Cell Press publication, adds an octopus to the growing list of tool users.

The veined octopus under study manages a behavioral trick that the researchers call stilt walking. In it, the soft-bodied octopus spreads itself over stacked, upright coconut shell "bowls," makes its eight arms rigid, and raises the whole assembly to amble on eight "stilts" across the seafloor. The only benefit to the octopus's ungainly maneuver is to use the shells later as a shelter or lair, and that's what makes it wholly different from a hermit crab using the discarded shell of a snail.

"There is a fundamental difference between picking up a nearby object and putting it over your head as protection versus collecting, arranging, transporting (awkwardly), and assembling portable armor as required," said Mark Norman of the Museum Victoria in Australia.

"While I have observed and videoed octopuses hiding in shells many times, I never expected to find an octopus that stacks multiple coconut shells and jogs across the seafloor carrying them," he said.

In recalling the first time that he saw this behavior, Finn added, "I could tell that the octopus, busy manipulating coconut shells, was up to something, but I never expected it would pick up the stacked shells and run away. It was an extremely comical sight -- I have never laughed so hard underwater."

After 500 diver hours spent "under the sea," the researchers observed the behavior of 20 veined octopuses. On four occasions, individuals traveled over considerable distances -- up to 20 meters -- while carrying stacked coconut shell halves beneath their body.

"Ultimately, the collection and use of objects by animals is likely to form a continuum stretching from insects to primates, with the definition of tools providing a perpetual opportunity for debate," the researchers concluded. "However, the discovery of this octopus tiptoeing across the sea floor with its prized coconut shells suggests that even marine invertebrates engage in behaviors that we once thought the preserve of humans."

Story Source:
Adapted from materials provided by Cell Press, via EurekAlert!, a service of AAAS.

Octopuses have been observed carrying coconut shells in what researchers claim is the first recorded example of tool use in invertebrates.

There is a growing record of tool use in animals and birds, from musical "instruments" made by orang-utansMovie Camera to sponges used by dolphins to dislodge prey from sand.

Now veined octopuses, Amphioctopus marginatus, have been filmed picking up coconut halves from the seabed to use as hiding places when they feel threatened.

"This octopus behaviour was totally unexpected," says Julian Finn, a marine biologist at Museum Victoria in Melbourne, Australia, who has filmed at least four individual veined octopuses performing the trick off the coast of Indonesia.
Discarded coconuts

People living in Indonesian coastal villages discard coconut shells into the sea after use. When the octopuses come across these on the seabed, they drape their bodies over and around the shells, hollow-side up, leaving their eight arms dangling over the edges.

The octopuses then lift the shells by making their arms rigid, before tiptoeing away in a manoeuvre Finn calls stilt-walking.

When the octopuses feel threatened, they flip the half shells over themselves and hide. Some even use two shells to create a more spacious shelter with an opening through which they can keep a lookout.

"It was a very comical sight," says Finn. He believes octopuses have known for millennia how to perform similar tricks with unoccupied bivalve shells, but have only recently discovered that coconut halves are a light and convenient alternative.
Tool use

Finn argues that the behaviour qualifies as tool use for a number of reasons. First, the shells are not permanent homes like those occupied by hermit crabs, but are carried around for future use.

It is also a costly behaviour, both in terms of energy use and in potentially making the octopuses more vulnerable to attack.

But there are uncertainties about whether the octopuses have learned this behaviour by observing others, or by working it out for themselves in each case.

"The finding is remarkable, particularly as the octopus transports the tool for future use," says Christopher Bird of Imperial College London, who studies tool use in rooks. "But simply observing tool use in the wild doesn't necessarily mean that the animal is cognitively sophisticated, as we don't know how the behaviour developed."
Cognitive demands

"The conventional definitions of tool use include the use of non-attached objects to act on other object(s), which may be food," says Alex Kacelnik of the University of Oxford, whose team recently studied whether crows plan their tool use in advanceMovie Camera.

"The use of a coconut shell for protection does not fit this definition, but I sympathise with the authors in that this does not imply that the cognitive demands for such an action are lower," Kacelnik says. "The interesting issues are not whether this observation fits a pre-established definition, but what cognitive operations make the behaviour possible."