For the first time, researchers have recorded a mushroom coral eating a jellyfish. 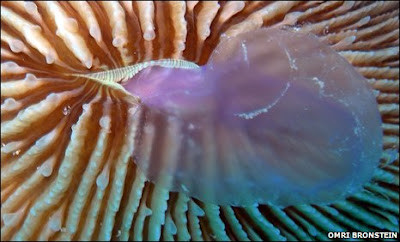 Apparently, some sea anemones have also been recorded to snack on jellyfish.

I wonder if our mushroom corals also suck in jellyfishes when they can? So much more to learn about our shores!

A coral is recorded eating a jellyfish for the first time, in intriguing photographs taken by scientists.

Yet the photos reveal a stationary mushroom coral sucking in a large moon jellyfish.

Researchers believe the ability to feed on a variety of food sources like jellyfish may give the coral an advantage in a changing world.

The researchers publish their findings in the journal Coral Reefs.

The pictures were taken on a dive by Mr Omri Bronstein from Tel Aviv University in Israel and Mr Gal Dishon from Bar-Ilan University, Ramat Gan, Israel in March 2009 during a survey on reefs near the Israeli city of Eilat in the Red Sea. 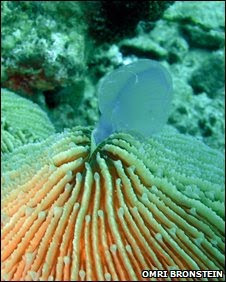 Ocean currents and nutrients had created a seasonal bloom of the jellyfish (Aurelia aurita) and many surrounded the reef in which the team were diving.

It was then they saw the strange behaviour.

"During the survey we were amazed to notice some mushroom corals actively feeding on the moon jellyfish," says Ada Alamaru, a member of the research team who is doing her PhD in marine biology supervised by Prof Yossi Loya at Tel Aviv University, Israel.

"We couldn't believe our eyes when we saw it," Ms Alamaru says.

The moon jellyfish is known to be eaten by a number of predators including fish, turtles and sea birds.

However, to find it preyed upon by the mushroom coral ( Fungia scruposa ) was a unique discovery.

"This is the first documentation of a coral feeding on a jellyfish almost equal to its size," Ms Alamaru says.

"In fact we saw a few corals feeding and not only one."

Normally corals feed on small microscopic organisms that make up plankton only 0.2mm to 0.4mm in size. In doing so they may ingest extremely small embryonic jellies that would be difficult to see by the naked eye. However research into the stomach contents of corals by scientists in the US did not find evidence of this.

They also feed on energy products provided by photosynthetic algae that live inside the coral.

But they have not been reported as feeding on adult jellies.

"This is definitely unusual. As far as I know no other coral are reported to feed on jellyfish. However, some sea anemones, which are close relatives of corals, are documented feeding on other jelly species," Ms Alamaru says.

Unlike most reef building corals which are colonial and are made up of hundreds of polyps F. scruposa is solitary and composed of one large polyp, measuring up to 30cm in diameter.

They are not attached to the seabed so have a limited ability to move, unlike their reef building relatives.

However, Ms Alamaru says it is still a mystery how exactly F. scruposa manages to capture its prey.

The coral's ability to feed opportunistically when a jellyfish bloom occurs provides valuable protein to the animal.

Ms Alamaru suggests the discovery reveals not only a food source for the large mouthed coral but also potential further benefits in a changing environment, where due to climate change and anthropogenic disturbances, jelly blooms are increasing in frequency and intensity.

"The ability to utilise a variety of food sources and to take advantage of such a bloom event gives the mushroom corals an advantage compared with other small polyped corals that are not able to feed on such large prey items," Ms Alamaru says.