The big googly eyes of the mantis shrimp are sometimes all you can see peeping out of its burrow. 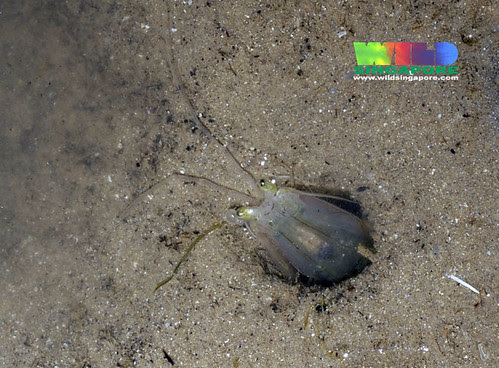 These eyes have special light-sensitive cells that act as quarter-wave plates, allowing the animal to process polarized light. Manmade quarter-wave plates perform this function in CD and DVD players and in circular polarizing filters for cameras. The natural mechanism in the mantis shrimp is 'beautifully simple', comprising cell membranes rolled into tubes, and completely outperforms synthetic designs.

The remarkable eyes of a marine crustacean could inspire the next generation of DVD and CD players, according to a new study from the University of Bristol published today in Nature Photonics.

The mantis shrimps in the study are found on the Great Barrier Reef in Australia and have the most complex vision systems known to science. They can see in twelve colours (humans see in only three) and can distinguish between different forms of polarized light.

Special light-sensitive cells in mantis shrimp eyes act as quarter-wave plates -- which can rotate the plane of the oscillations (the polarization) of a light wave as it travels through it. This capability makes it possible for mantis shrimps to convert linearly polarized light to circularly polarized light and vice versa. Manmade quarter-wave plates perform this essential function in CD and DVD players and in circular polarizing filters for cameras.

However, these artificial devices only tend to work well for one colour of light while the natural mechanism in the mantis shrimp's eyes works almost perfectly across the whole visible spectrum -- from near-ultra violet to infra-red.

Dr Nicholas Roberts, lead author of the Nature Photonics paper said: "Our work reveals for the first time the unique design and mechanism of the quarter-wave plate in the mantis shrimp's eye. It really is exceptional -- out-performing anything we humans have so far been able to create."

Exactly why the mantis shrimp needs such exquisite sensitivity to circularly polarized light isn't clear. However, polarization vision is used by animals for sexual signalling or secret communication that avoids the attention of other animals, especially predators. It could also assist in the finding and catching of prey by improving the clarity of images underwater. If this mechanism in the mantis shrimp provides an evolutionary advantage, it would be easily selected for as it only requires small changes to existing properties of the cell in the eye.

"It could help us make better optical devices in the future using liquid crystals that have been chemically engineered to mimic the properties of the cells in the mantis shrimp's eye."

This wouldn't be the first time humans have looked to the natural world for new ideas, for example the lobster's compound eye recently inspired the design of an X-ray detector for an astronomical telescope.

Adapted from materials provided by University of Bristol.