On 16 Sep, and 80,000 tonne container ship ran aground at Sebarok Beacon. Shores near this location include the Sisters Islands and Pulau Jong. 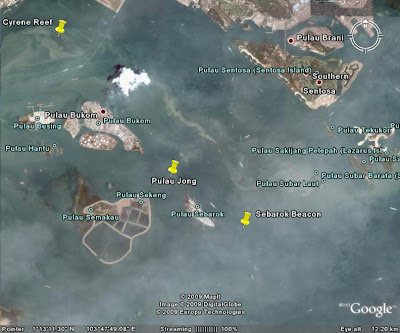 Pulau Sebarok is the 'petrol station' of our port and is where major bunkering (refuelling) facilities are located).

During a field trip to St. John's Island, I got a look the ship.

The two Sisters Islands are in the foreground with the ship in between the two islands. 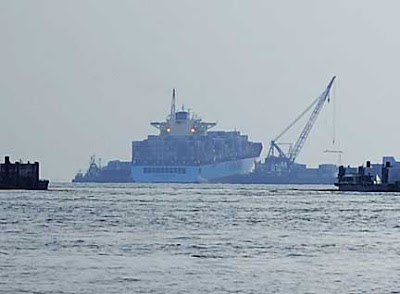 According to the Maritime Port Authority (MPA), "the vessel is in stable condition and the shipowners have arranged for a salvage company to attend to the grounded vessel. MPA will investigate the incident."

More media reports about the grounding incident on the wildsingapore news blog.

MPA also said that shipping in this area and adjacent waters "has not been affected by the grounding".

However, when the volunteers with ReefFriends conducted their regular reef survey at Pulau Jong in Jul 09, they came across signs of a massive collision on the reefs there. See the Colourful Clouds blog for more details.

On 19 Oct 99, there was a collision between a bulk carrier "Graceous (85 695 GT) and an unladen tanker "Lula I" (62 031 GT) outside port limits and in Indonesian waters about 2 nautical miles (approx 4km) south east of Sebarok Beacon. There were no injury or pollution reported. Visibility at the time of the incident was reduced due to heavy showers. More in the MPA news release.

Even though there has been no pollution, groundings do damage the reefs.