Marcus Chua's talk on the Greater Mousedeer at Pulau Ubin

Today, Marcus Chua gave a passionate and inspiring presentation on his study of the medium-sized mammals of Pulau Ubin, with a really nifty title! 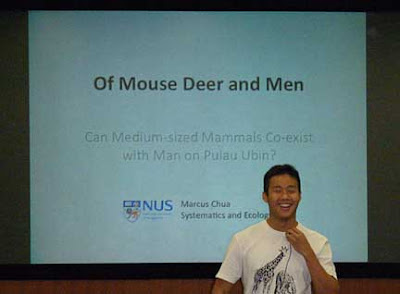 A quick wash up after the Cyrene Reef trip, I headed for this not-to-be-missed talk.

Marcus began with some somber facts about extinction of mammals in Singapore. With 95% loss of our forests, 71% of our mammal species have gone extinct. However, our remaining forest fragments provide the last refuge for our mammals and wildlife. And here's some of our major forest fragments. He decided on Pulau Ubin as, unlike the other fragements, it is not protected by limited access or law. 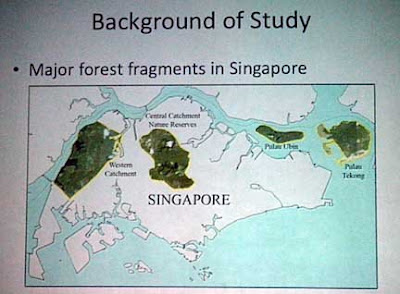 Marcus then shared some background on Pulau Ubin. Among the interesting points he raised was that it has the potential to receive 'immigrant wildlife'. He also outlined some of the many changes that have affected Pulau Ubin's natural habitats, from quarrying to plantations.

His study includes a review of the status of mammals on Pulau Ubin in the past century. Sadly, there were few studies of mammals on Pulau Ubin in the past. One reason was probably because the mainland forests were more accessible, while full scale quarrying made it difficult to work on Ubin. Specific records only picked up in the 1980s. At that time, among the records were of the Crab-eating macaque (Macaca fascicularis), Sunda pangolin (Manis javanica), Leopard cat (Prionailurus bengalensis), Oriental small-clawed otter (Amblyonix cinera), Smooth coated otter (Lutrogale perspicillata), Common palm civet (Paradoxurus hermaproditus), Wild pig (Sus scrofa).

Marcus' study includes an effort to do an inventory of medium-sized mammals (under 3kgs), and he did this via line transects and camera trapping. Together with a team of volunteers, Marcus did 192 transects covering more than 70km! And did more than 400 trap nights. Wow! 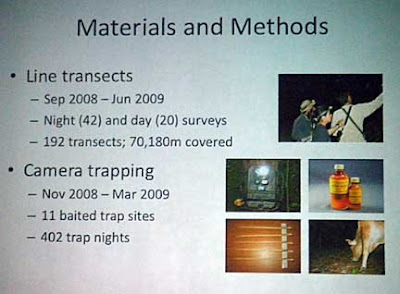 And these are some of his results. The Greater Mousedeer was a surprise find! 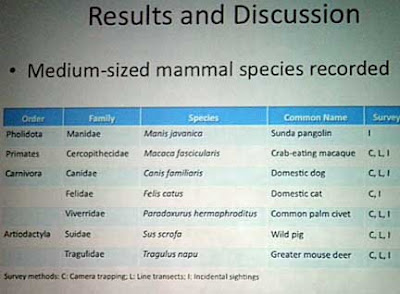 Marcus also shared some of the animals caught in his camera trap.

There were wild pigs. 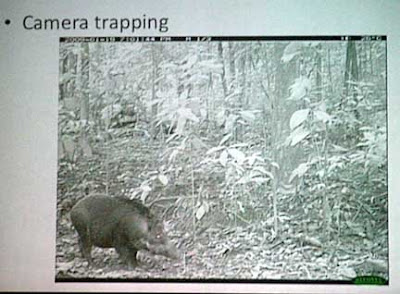 Mischievous macaques. This one had jumped on the camera, which is why the horizon is tilted. 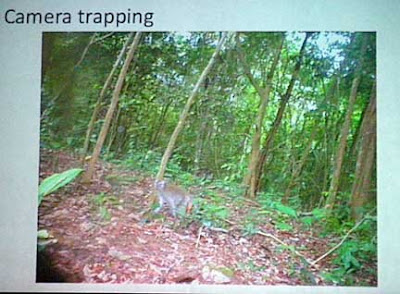 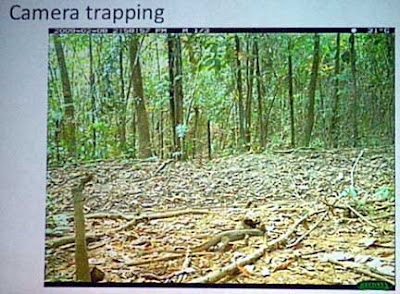 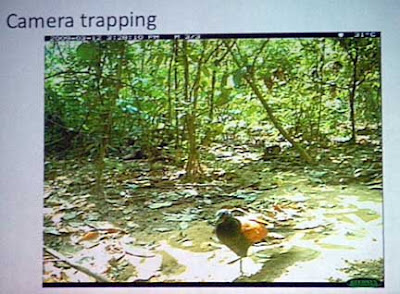 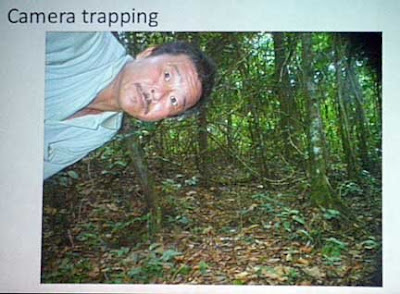 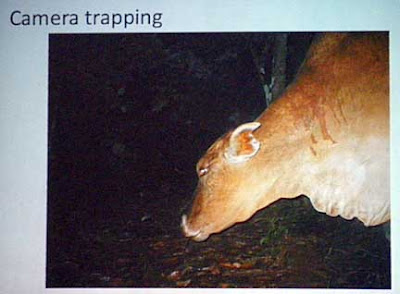 And of course the Greater Mousedeer. 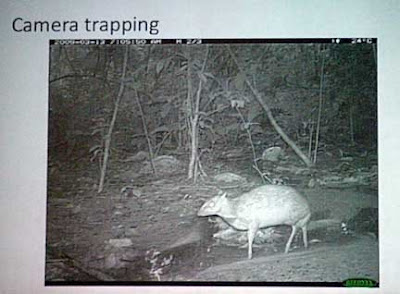 Besides mammals, his study also resulted in some other new records for Pulau Ubin: a bird and a cockroach. Alas, the warm and furry creature is far more charismatic. 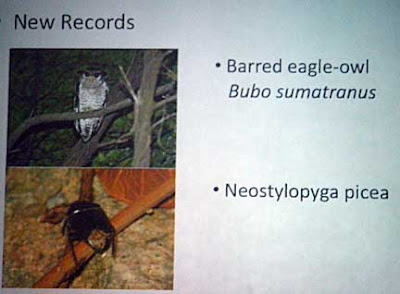 Marcus also discussed some reasons why the Greater Mousedeer was previously not detected. My favourite reason is that we have better lights today. I also do a lot of documentation at night. And good lights do make a difference. Although the eye-shine technique doesn't work much on the shores as most marine life don't even have eyes. 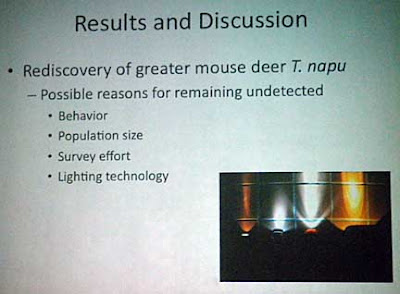 And how did the Greater Mousedeer end up on Pulau Ubin? One possibility is that they came from Johor, particularly when the forests there were disturbed by development. He shows how the northern most tip of Pulau Ubin is not really all that far away from Johor. 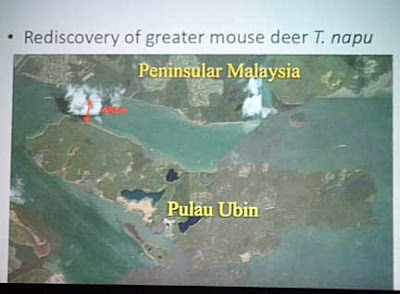 He also shared a clip about how the African cousin of the mousedeer can swim underwater!

Marcus highlights the importance of these mammals to the health of the forest in Pulau Ubin. They disperse seeds of native plants, chew up rubber seeds (which are not native), and shape the wild parts of Pulau Ubin into the form that we now know and love.

Marcus also shared about the distribution of the animals he encountered during his study. Including that of the Greater Mousedeer. These distribution maps indicate the areas of Pulau Ubin that are important to these mammals, and suggests the issues that need to be considered to protect them. 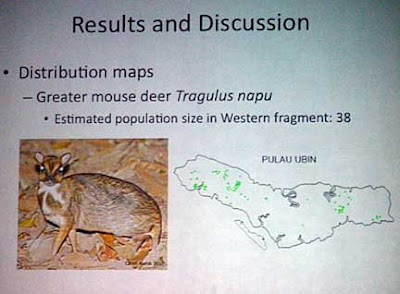 Of course, one of the biggest impacts on these little mammals are people. Marcus' study included an analysis of visitor traffic and the difficulties of managing visitors as there are multiple stakeholders on Pulau Ubin. 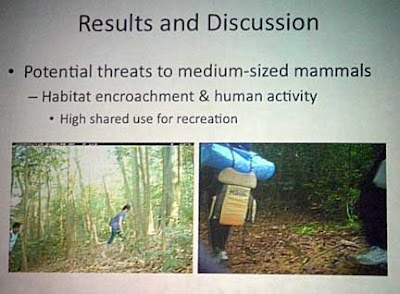 And there are other threats too to the mammals of Pulau Ubin. 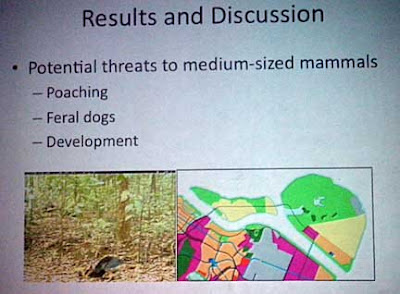 There is certainly much more to be learnt and done for the mammals of Pulau Ubin. But Marcus' study has made incredible finds and shed light on some of the key issues that impact the wild places of Pulau Ubin.

Of course there's a lot more Marcus covered. I'm quite impressed by his passion!

Marcus ended his talk with this funny cartoon carried in the press following the rediscovery of the Greater Mousedeer. 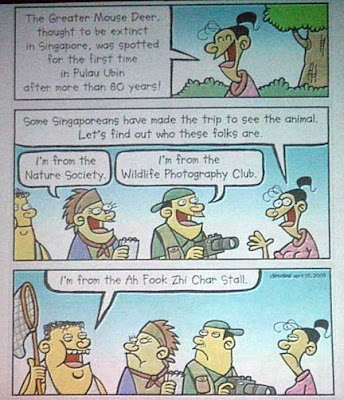 After a lively Q&A, we adjourned for drinks at the food court.

And Adelle is back with TG! He sure is a lot bigger! 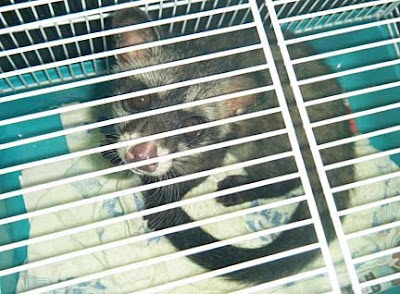 TG the civet kitten is now nearly a civet cat. He was found at Pulau Ubin and Adelle has been taking care of him. Indeed, a small mammal of Pulau Ubin!