Checking up on Labrador

It's sunrise on Labrador! A 'late' start for a change as the low tides shift away from ungodly hours. 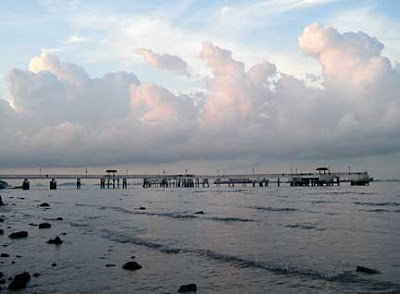 TeamSeagrass is coming a little later. I decided to come earlier to see how this beleaguered shore is doing.

The tide wasn't very low so I could only do the higher shores. 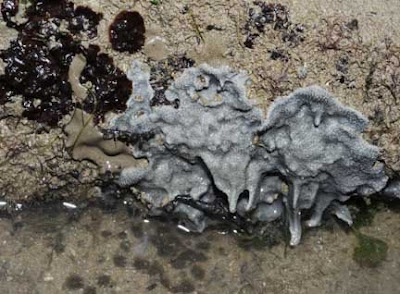 There's some encrusting sponges on the rocks. 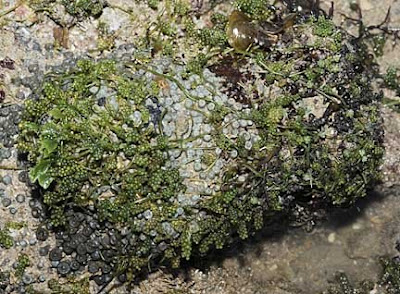 And a wide variety of seaweeds too. Almost all the seaweeds that I commonly saw at Labrador in the past were present today.

There were patches of these Sponge seaweeds (Codium sp.) which are usually a nice green like the one in the photo on the right. One patch though was yellowish.

Seaweeds are interesting because they are food for animals. This hard Coin seaweed (Halimeda sp.) has a tiny slug on it. The Halimeda slug (Elysiella pusilla) is merely a blob with tiny white tentacles on the head! Apparently this slug not only prefers to feed on the more toxic parts of the seaweed, but also use the toxins to protect itself and its eggs.

There were lots of colonial anemones or zoanthids (Order Zoanthidea). Some parts of the shores were thick with them and I couldn't walk there.

There were a lot more of the Button zoanthids (Zoanthus sp.) in various colours (photo on the left) and some Broad zoanthids (Palythoa mutuki).

The other animal that was commonly seen today were the Frilly sea anemones (Phymanthus sp.) in various colours and patterns. 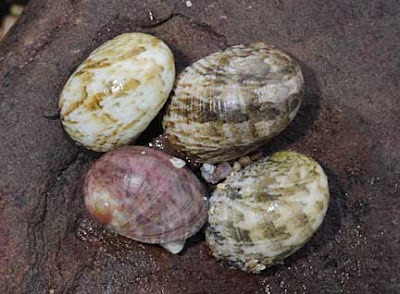 Of the nerites, my favourites are the Polished nerites (Nerita polita). And there were many of these snails in various delicate pastel patterns. I noticed than when I walked on the little stones where they are found, the snails dropped off and rolled among the stones. They are then very hard to spot as their shell colours match the colourful stones on this shore! 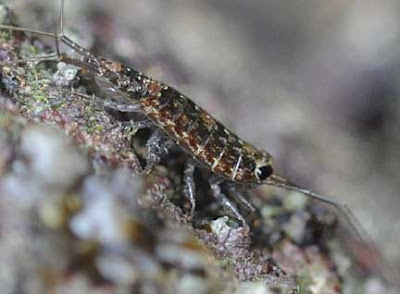 The sea slaters (Ligia sp.) were big, fat and busy on the rocks. While on the shores, there were a lot of snapping shrimps (Family Alpheidae) but I was to lazy to stalk one. I got glimpses of some tiny swimming crabs (Family Portunidae) and Hairy crabs (Family Pilumnidae) but didn't see other crabs that were usually common here.

In terms of marine life, the shore is very quiet. But the seagrasses are doing well and there were lots of seaweeds. And I didn't see any obvious signs of damage from the recent oil spill off Sentosa on 1 May. 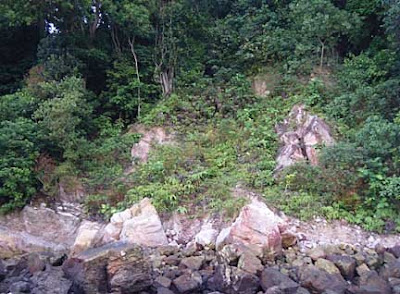 The area where there was big tree and rock fall is now cloaked in green. Truly, as Bian said, the pioneer plants form a scab over disturbed areas allowing nature to heal.

On the shore there were some signs of death. 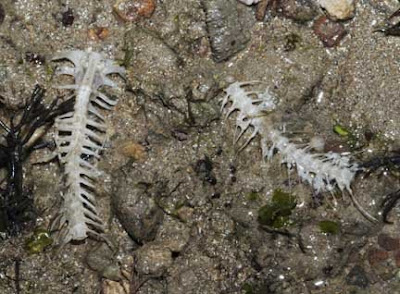 But these are possibly from the fishermen that fish off the pier on Labrador. And not necessarily some sort of mass fish death. 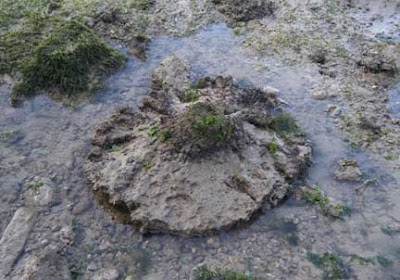 There was also a very large dead upside down Disk hard coral (Turbinaria sp.). It had been cut off at the base. Was this one of the corals that was moved during the major works on Labrador in 2007?

At that time, a cofferdam was built on Labrador's reefs in order to relocate submarine cables serving Pulau Bukom to make way for the massive reclamation project to build the container terminal extension at Pasir Panjang next to Labrador. 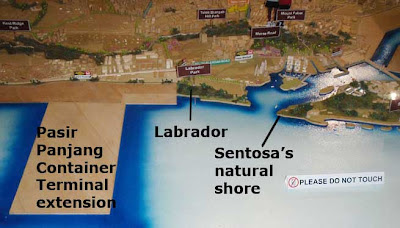 Here's some photos comparing the state of the shore throughout these major works. 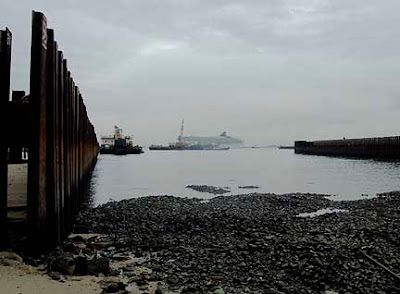 The cofferdam in Dec 07. 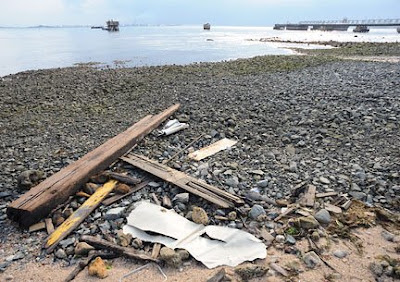 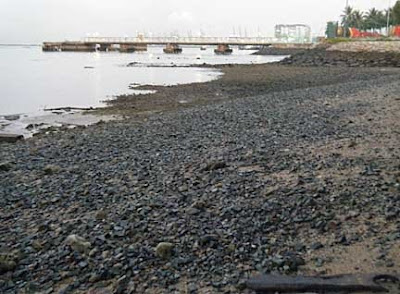 After the cofferdam construction, there was a massive amount of debris on the high shore. 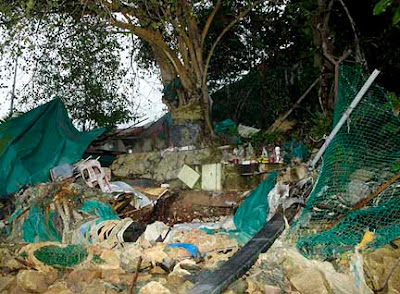 The situation in Dec 07. 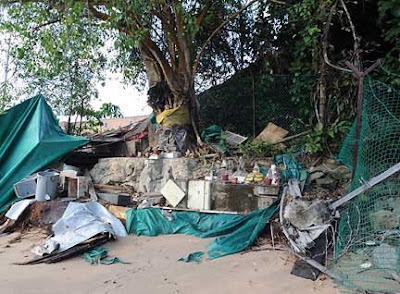 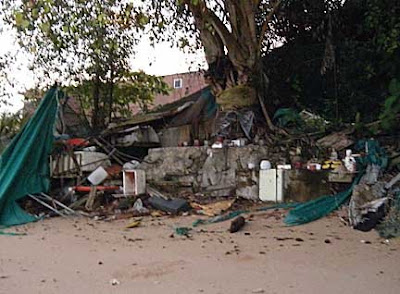 While the reefs were impacted by the cofferdam, the seagrass areas were affected by large concrete structures that had something to with Singapore Polytechnic's project on Labrador. 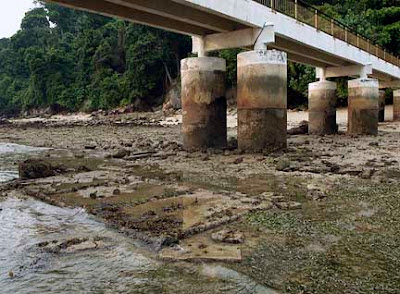 The situation in Nov 07. 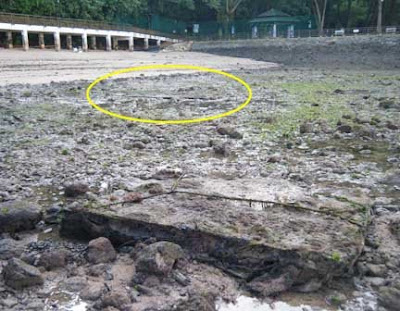 Today, parts of the concrete structures are STILL there. With one large slab near the pier legs, and a large piece of wood in the yellow circled area. 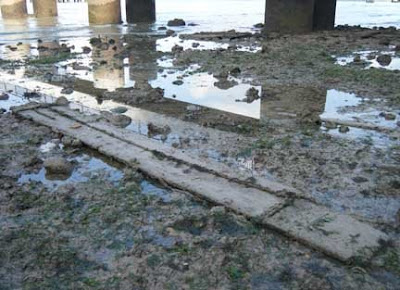 Here's a look at the piece of wood.

What else is at Labrador?
Around the corner from this rocky shore-reef at Labrador is Berlayar Creek which has a stretch of mangroves as well as a bit of rocky shores and seagrasses and sandy shores with interesting marinelife.

What has Labrador lost?
Here is what Labrador's reefs and rocky shores looked like in the recent past. However, I believe that once we stop impacting the shore and leave it alone, it will recover in time. After seeing the wondrous marine life that can be found on a totally artificial shore like Tanah Merah yesterday, I am quite hopeful Labrador can recover once we stop disturbing it.