Previously, I didn't pay much attention to the mangrove trees on Pulau Hantu. But since I got bit by the mangrove bug, I thought I should have a closer look at them. 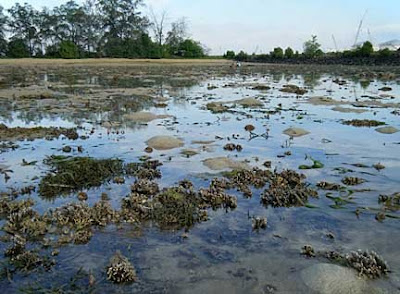 Today, as the tide came in and we retreated in to the swimming lagoon, I realised there were mangrove trees growing on the seawall! 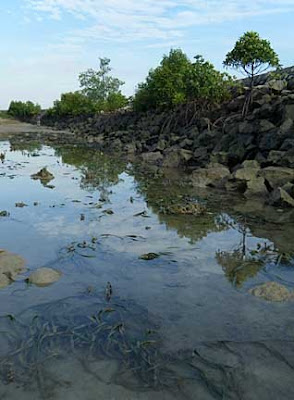 With seagrasses in the lagoon, and trees on the wall, it's almost like a natural ecosystem!

And there were so many species of mangrove trees on the wall! 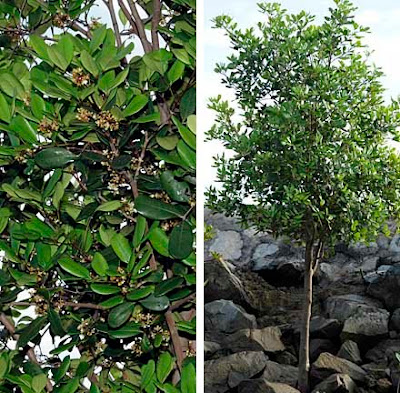 There were several Xylocarpus granatum, also flowering as the others we've seen at Pulau Ubin and Lim Chu Kang recently. It'll be really splendid when the flowers turn in to the humungous cannon-ball shaped fruits. 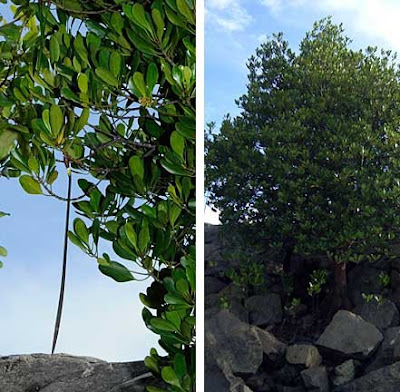 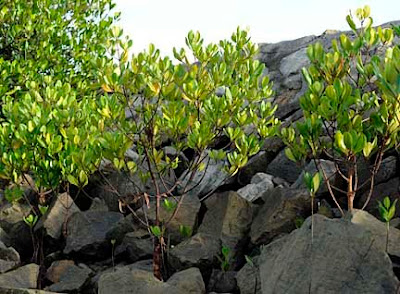 There were several young trees that look like Ceriops. I'm not sure if they are Ceriops tagal or Ceriops zippeliana. 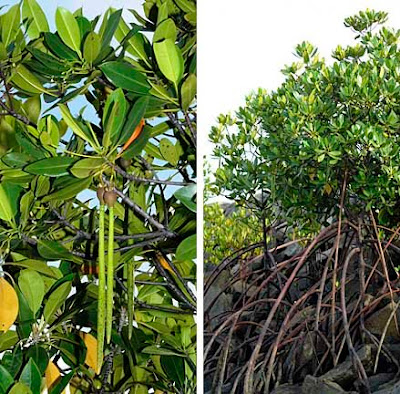 There were many Rhizophora stylosa trees! Not just on the seawall, but also at the edges of the lagoon. And all flowering and 'fruiting' quite profusely. 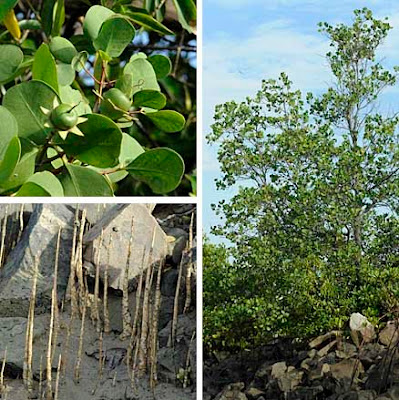 There was one large Sonneratia alba on the wall, its conical roots sticking out on the soft silty sand of the lagoon. 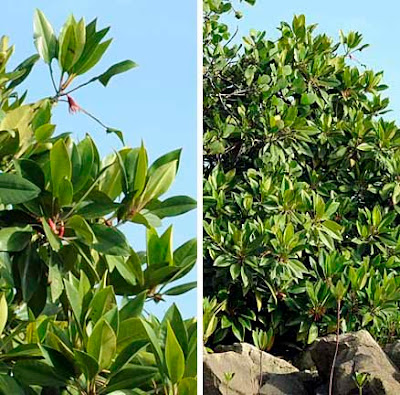 There were two Bruguiera gymnorrhiza with their bright red flowers. 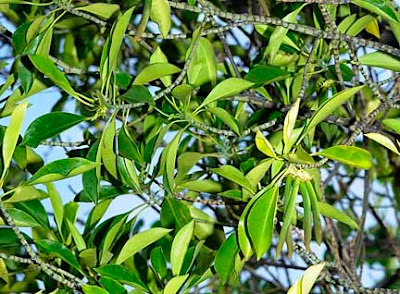 And a few Bruguiera cylindrica too. 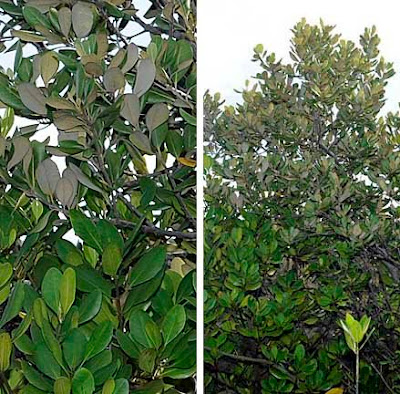 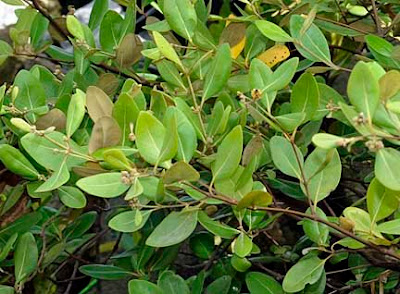 Another Avicennia rumphiana closer by was blooming! The first one I've seen in bloom recently. 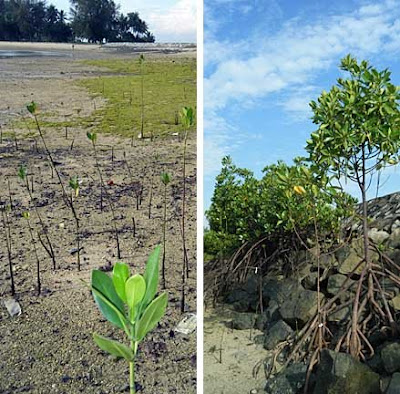 In addition to the mangrove trees that had literally taken root on the seawall, there were also lots of little ones in the edges of the lagoon.

There are three humungous Sonneratia alba in between Hantu Besar and Hantu Kecil. They must have been there long before the area was reclaimed and seawalls built to create the swimming lagoons.

Despite the close proximity of petrochemical plants on Pulau Bukom (we could smell benzene in the air all morning), the mangrove trees are settling in on Pulau Hantu. The fiesty little Rhizophora stylosa is obviously recently settled in the lagoon.

The poor young mangrove trees, however, have to cope with all kinds of challenges. 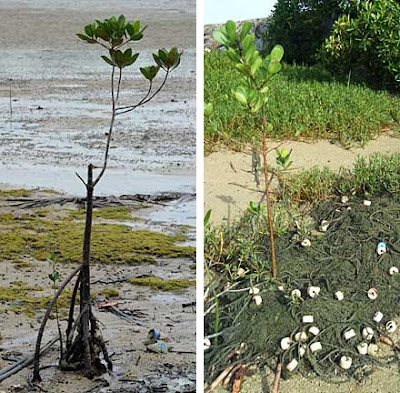 One had a huge abandoned fishnet entangled around its roots. Another seemed to have had its 'head' sliced off but it recovered by growing a side branch. 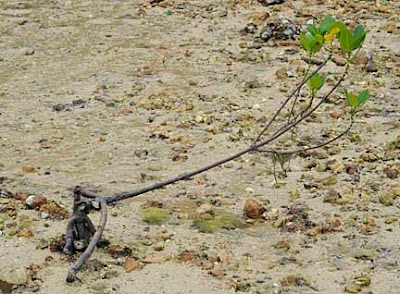 Yet another is struggling to recover after being toppled to the side.

On the high shore beyond the reach of the high tide were other interesting shore plants that probably naturally grew there.

Marcus spotted this beautiful tree. Later, I spotted two other trees of the same kind. 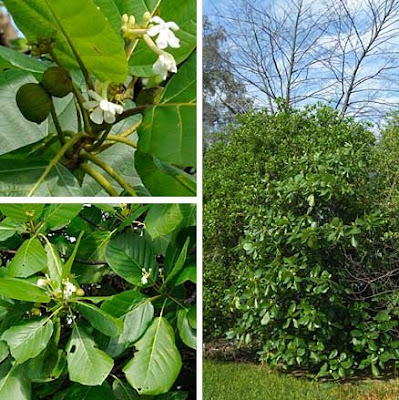 This is the splendid Guettarda speciosa also called Ketapang pasir. I first saw this on Semakau and I did a long post about this tree then. The tree is listed as 'Endangered' in the Red List of threatened plants of Singapore!

This small shrub with glossy green leaves was full of pretty white whiskery flowers. Apparently, the seeds and roots are used to treat poisoning from fish and other marine animals, so it would be a handy plant to have on the shore! It's amazing how wild plants growing in the right place can look healthy and pretty without anyone having to take care of them.

There was also a little thicket of Bedara laut (Ximenia americana). This bush is very commonly seen on Pulau Semakau and visitors often ask me if the fruits can be eaten. It is said the sour fruits are eaten fresh or pickled, and also used as a substitute for lemon with fish. The seed is oily and the oil is used in cooking in southern India. The nuts are eaten but have a strong purgative effect so only a few should be taken at a time; "many cause deleterious effects" says Burkill. The crushed leaves smell of bitter almonds and are sometimes used as flavouring by the Dutch who lived in the tropics.

Some of the plants there were draped with curtains of Cassytha filiformis. In this state, it's easy to see why its Malay name is Rambut putri which means 'Hair of the Princess'. A semi-parasitic plant with skinny long stems it has no visible leaves. The flowers are tiny (1.5-2mm). Fruits are small, round, juicy white berries (7mm) that are eaten and dispersed by birds.

There was one lush Baru-baru or Portia tree (Thespesia populnea) in addition to lots of Sea hibiscus (Hibiscus tiliaceaus) and Sea lettuce (Scaevola taccada).

And a very nice bushy Peria laut (Colubrina asiatica) which is my new plant learnt for the day, so it has its own post.

Pulau Hantu is indeed a great place to explore! Not only for its magnificent reefs, but also its amazing recovering mangroves and shore plants.
Posted by Ria Tan at 5:42 PM