How is charcoal made from mangroves?

Dr. John Yong generously shares about the process of making charcoal from mangroves. Dr. Yong is highly sought after for his vast experience and knowledge of mangroves, so I am very grateful that he has allowed me to post this information and his photos on this blog. 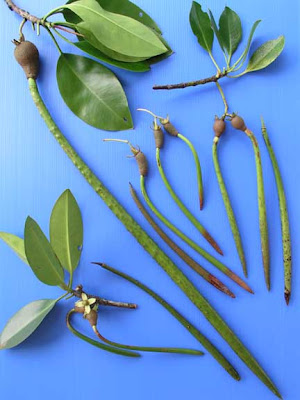 Only Bakau minyak (Rhizophora apiculata) is used for making charcoal. Dr Yong explains the other common mangrove species are not as good for this purpose. 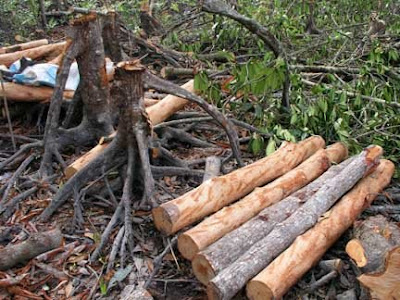 He shares that charcoal experts will normally use only the stem of the tree, and not the prop roots. 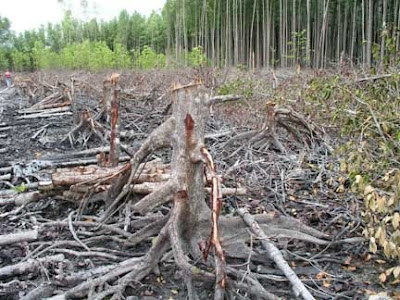 This is what the area looks like after harvesting. The prop roots will be collected later for firewood to heat up the kiln. 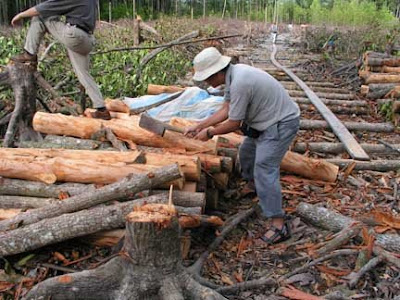 The bark is removed from the stem. 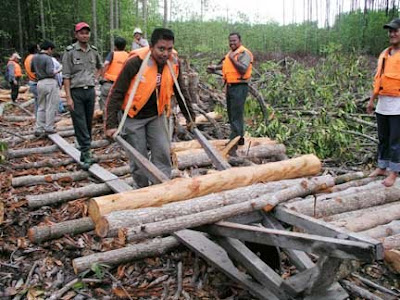 The de-barked logs are then carried to the boat. Dr Yong reminds "Remember mangrove wood will sink!!!". 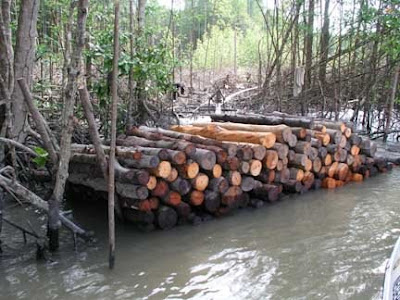 Here are logs stacked up and ready for transport to the factory. 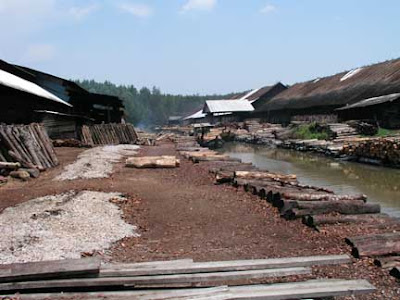 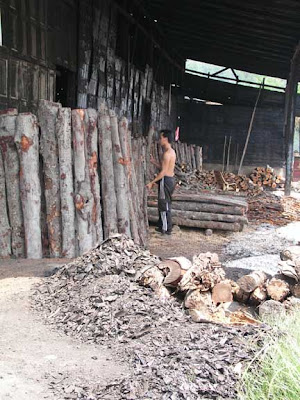 At the factory, staff will select the greenwood and organise them according to the stem diameter. 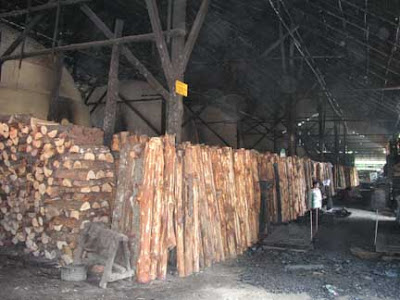 Inside the factory, the logs are placed in a kiln (usually shaped like an igloo). Here, the logs are smoked to remove the water from them. To create the smoke, other mangrove wood is burnt, such as non-Rhizophora species like Bruguiera, Xylocarpus and also the unwanted prop roots from Rhizophora apiculata. 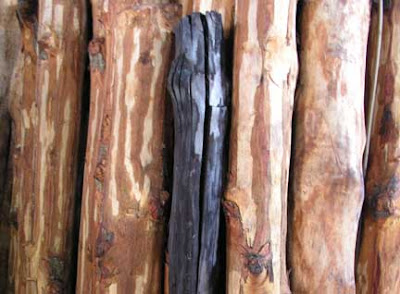 A comparison of charcoal (the single black log) and green wood. 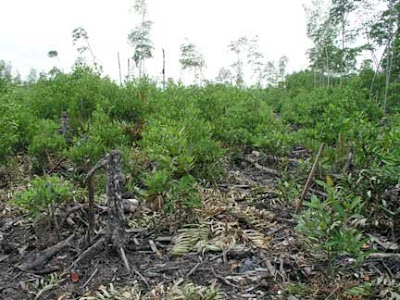 All the above photos and information are provided by kind courtesy of Dr. John Yong. Dr. Yong has tirelessly and quietly inspired so many volunteers and other nature lovers. He shares his knowledge in wonderful 'stories' that captivate, and encouraged us to learn more and appreciate our mangroves better.

How long does it take to produce the charcoal?

Usually it takes 38 to 50 days to dry the wood, and another 22 days to cool down the kiln before workers are allowed to take out the charcoal. Each kiln can take about 20 tonnes of mangrove wood. By the end of the drying process, the weight will drop by 60 per cent.

What is the charcoal used for?


KUALA SEPETANG, Malaysia (Reuters Life!) - A world away from Tokyo, Malaysians are toiling in baking heat to produce quality mangrove charcoal for Japanese customers who have helped revive this industry despite environmental concerns.

The coastal town of Kuala Sepetang, in the northwestern Perak state around 300 km from the capital Kuala Lumpur, houses factories that turn mangrove trunks into charcoal, with uses ranging from barbecues and making tea to purifying air.

The mangrove charcoal is considered superior to regular coal because it burns longer and produces less smoke. It is also used as a detoxifying agent in some traditional medicines.

Trade waned in the 1960s due to a switch from charcoal to cooking gas, but recent Japanese interest has helped drive sales to about $800,000 a month.

"It was at one time known as the sunset industry. Now, the Japanese are here, so it's back on its feet," said Chuah Chow Aun, owner of a factory where workers make $100-$200 a month in jobs ranging from transporting logs to harvesting charcoal.

Bark-stripped trunks of mangrove trees are baked in igloo-shaped kilns to remove water from the logs, leaving behind smoking charcoal collected mostly by local women, who work in the factories while their husbands fish in the nearby river.

Charcoal factory owners obtain mangrove wood from swamps where they are allocated logging areas by the government on a yearly basis, and boats lug the wood to the shore.

There are 336 kilns in Perak, said Chuah, with a total production of around 3,500 tonnes of charcoal a month.

The price of charcoal has risen by nearly half from about four years ago, he said, after a spike in Japanese demand that mops up around 60 percent of total charcoal produced.

Nearly half of Perak is covered with mangrove forest called Matang, the largest in the Malaysian peninsula, spread over more than 40,000 hectares covering nearly half of the state.

The government has a replanting exercise in place but there are environmental concerns about the dwindling forest that guards wildlife, protects against climate change and events such as the tsunami, by acting like a barrier against the Indian Ocean.

"I understand these mangrove trees are very dense and make good charcoal but this would be like burning the Mona Lisa to keep you warm," said Glen Barry, President of Ecological Internet Inc, a U.S.-based non-governmental organisation.

He said the mangrove harvest exceeded the number of mangroves regenerated, due in part to the fact that the trees take 30 years to mature.

But this may be a hard sell to the local people, who depend on the swamps to eke out a living in a state that is the second biggest on the peninsula by area but contributes less than 4 percent to the country's economy.

"I'm not young anymore, what other job can I do?" says Mahteh Mah, a 43 year-old mother of three, wiping the sweat from her face on a dusty afternoon at the charcoal factory.


MOST homemakers and chefs know there is no match in terms of fragrance for food cooked over a charcoal fire.

Just imagine how Malaysian favourites like satay, barbecued meat, grilled seafood, claypot chicken rice, among others, would taste without charcoal.

But aside from the weekend barbecue in the garden, it is no longer used in the kitchen because it is messy and not environmentally-friendly.

The smoke staining the walls and ceilings of their lovely, modern kitchens was enough to want housewives to switch to the cleaner gas or electricity-based cookers.

They know that rice tastes better if cooked over charcoal.

According to the Chinese, soup boiled over a charcoal fire and char kuay teow fried over wood taste better.

Although charcoal-making is a sunset industry, there is still a demand for it from satay, sliced barbecued meat, claypot chicken rice and bak kut teh sellers, among others.

In Johor, the largest concentration of charcoal makers is probably in Gelang Patah, or more specifically, along the river banks of Sungai Gelang Patah.

For over 50 years, the river and tributaries of Sungai Pulai have been a rich source of mangrove wood, locally known as kayu bakau.

It is sawn into lengths of about a metre before being stacked in a huge semi oval-shaped kiln for drying.

After the kiln is filled with mangrove wood, the door is closed, but there are several small openings about two metres above the ground for the smoke and moisture to drain away.

Firewood is ignited in another opening which resembles the entrance of an igloo. The heat soon spreads into the kiln and the drying process begins.

Usually it takes 38 to 50 days to dry the wood, and another 22 days to cool down the kiln before workers are allowed to take out the charcoal.

Each kiln can take about 20 tonnes of mangrove wood. By the end of the drying process, the weight will drop by 60 per cent.

If the charcoal is not fully dried, as revealed by its slightly brownish black colour, it will release more smoke when burned.

"This type of charcoal is not recommended to be used for grilling, but may be used to cook large pots of food like nasi briyani," said Lim Chong Yang.

The 55-year-old has been involved in charcoal-making since he was a teenager. He inherited the business from his father about 20 years ago.

There were more than 10 charcoal-makers 40 years ago but the number has dropped to only five now.

"Many people are not interested in inheriting the business. And it is becoming increasingly difficult to get mangrove wood," he said.

Lim supplies charcoal only to the Johor Baru market as his stock is limited.

The retail price of charcoal has gone up from 50 sen a kilogramme to RM1.60.