A sliver of Tuas: teeming with marine life!

It's the last sunset trip for this evening low tide cycle! And we spend it on Tuas, one of our favourite shores. 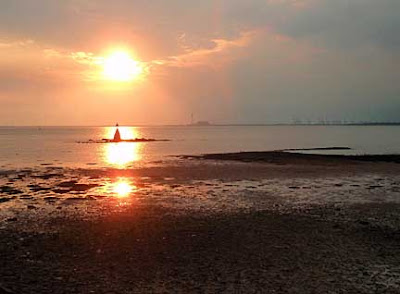 Thankfully, today we had glorious sunshine during our trip!

The Tuas shore has narrow stretches of seagrasses which is monitored by the staff of Schering Plough led by Sheryl and Helen under the umbrella of TeamSeagrass. They were supposed to do the monitoring today but this had to be cancelled due to unforseen circumstances. However, they kindly still let us go ahead with exploring the Tuas shore. 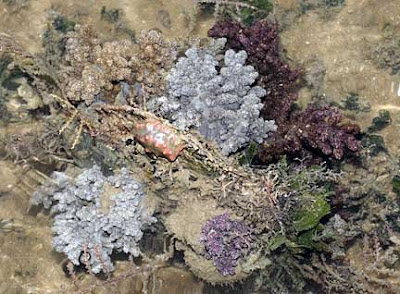 It was particularly heartening to see many Ball flowery soft corals dotting the shores. These are usually only commonly seen on Beting Bronok off Pulau Tekong. This is the first time I've seen so many of them on Tuas! In the crevices of one of these colonial animals were some tiny colourful brittlestars. 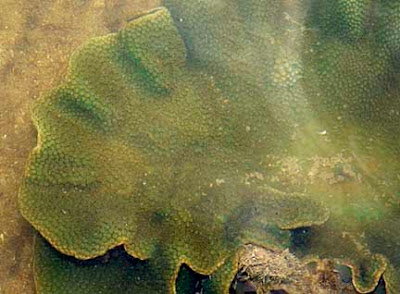 There were also some hard corals, such as this beautiful Disk coral that forms thin fluted bowl shapes (Turbinaria sp.). 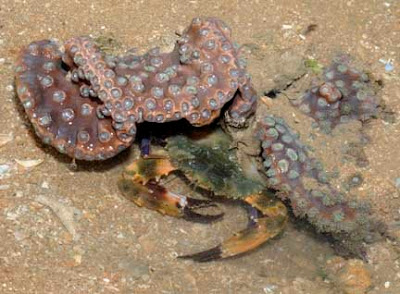 Another kind of disk coral forms thicker plates and has larger flowery polyps (Turbinaria sp.). A swimming crab (Family Portunidae) is sheltering under the coral! There was also a small clump of Zebra coral (Oulastrea crispata). I didn't come across other Favid corals (Family Faviidae) that used to be found on this reef, or the Goniopora corals that used to be there.

I saw a few sea fans (Order Gorgonacea) in deeper waters, but couldn't take a closer look at them or take their photos. Fortunately, Kok Sheng has taken lots of gorgeous photos of these sea fans and posted these on his wonderful creations blog! 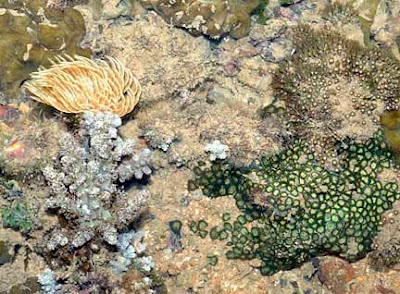 The coral rubble was covered in mats of different kinds of colonial anemones or zoanthids. There were large sheets of Rubber mat zoanthids (Palythoa tuberculosa), clumps of Broad zoanthids (Palythoa mutuki) and lots of Button zoanthids (Zoanthus sp.). Other encrusting soft cnidarians include the fine feathery soft coral whose ID I have yet to discover. There were also many candy hydroids and fluffy hydroids. The feathery fan worm in orange or banded brown were also commonly seen.

On the soft shores were several different kinds of cnidarians. There were lots of Haddon's carpet anemones (Stichodactyla haddoni). And I came across this Giant carpet anemone (Stichodactyla gigantea) in deeper water. It had lots of fishes around it. For the first time, I tried out the underwater functions of Sneaky Cam. 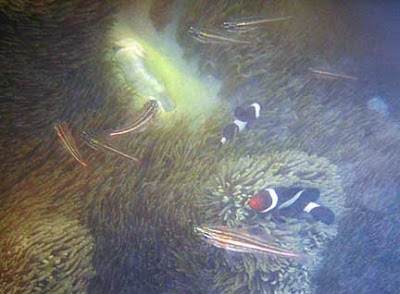 The anemone was home to lots of little 'Nemos'. These False clown anemonefishes (Amphiprion ocellaris) were happily zipping in and out amont the tentacles of the large sea anemone! It's the first time I've seen these fishes on Tuas, and there were so many of them! 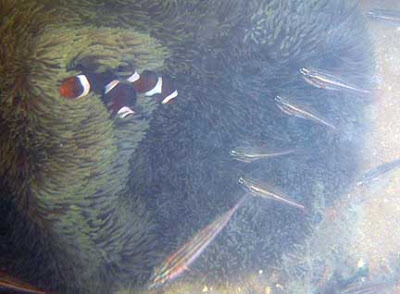 In addition to the 'Nemos' there were a lot of little Chequered cardinalfishes (Apogon margaritophorus) near the anemone. But these little fishes did NOT touch the anemone. I wonder why so many were gathered there? 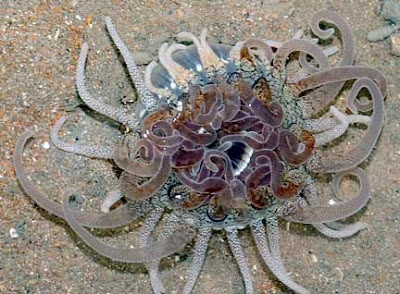 Kok Sheng came across this beautiful Glass anemone (Doflenia sp.) in the soft silty sand. This is the first time I've seen it on Tuas. 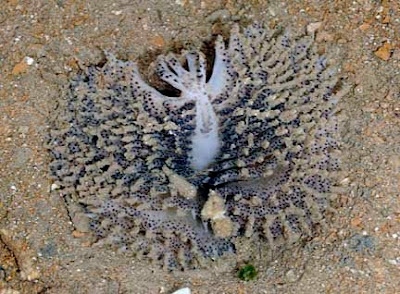 We also saw this spiky sea pen (Scytalium sp.), retracted into the sand. I looked, alas, no porcelain crabs were found in it. There were also several peacock anemones in various colours. 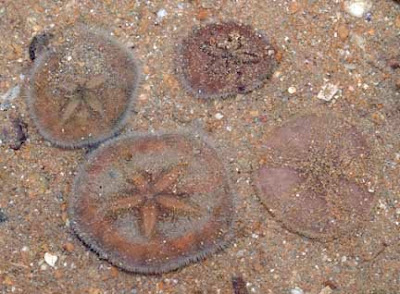 The shores were ringed with wide swathes of dark green crinkled Halimeda seaweed. The situation seems similar to my last trip to Tuas in Sep 08. Lots of tiny and large Thorny sea cucumbers (Colochirus quadrangularis) dotted the dark green carpets of this hard seaweed. This thorny sea cucumber was slightly different from the rest. 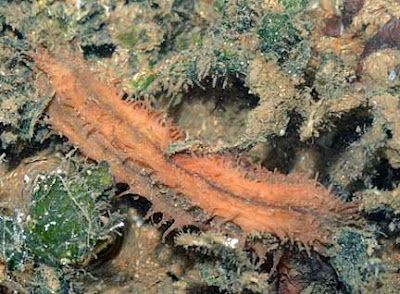 Jeff spotted this orange sea cucumber, which I have not seen on Tuas before. 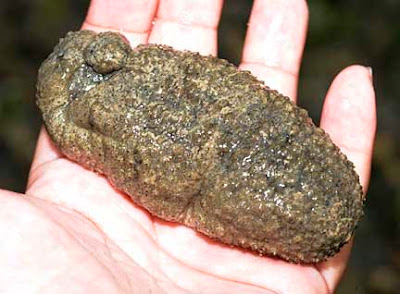 Kok Sheng found a plain sea star (Astropecten sp.) but we didn't come across any of the other kinds of sea stars seen in the past like the Biscuit sea star (Goniodiscaster scaber) and Cake sea star (Anthenea aspera).

Trapped in the pools among the hard Halimeda seaweeds was an Estuarine sea horse (Hippocampus kuda). 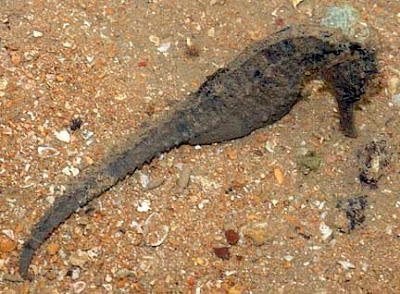 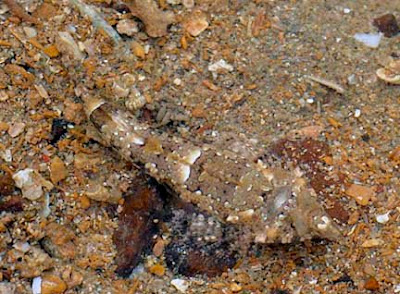 Jeff spots a little scorpionfish near the seahorse, and this tiny little dragonet! 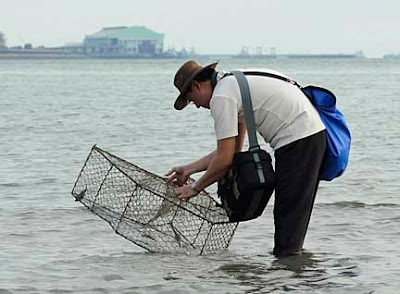 Alas, Jeff also came across a fish trap. It had a frogfish in it! Jeff released the fishes and got rid of the trap. It's sad that our few remaining shores have to put up with such abuse.

The only nudibranch I saw was the Marvellous Melibe! 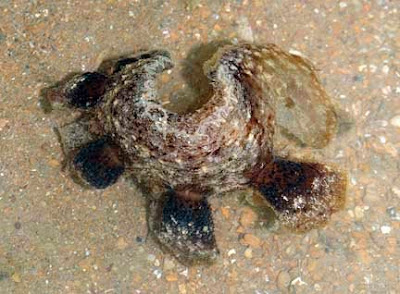 This very large nudibranch (about 12cm long) can swim, which it does upside down! 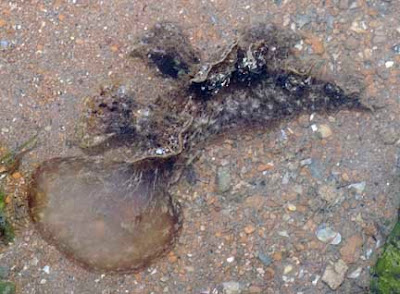 But the most facinating feature of this creature is its expandable hood! 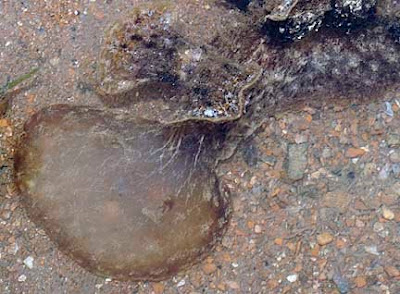 Which it uses to trap tiny little animals to eat! How cool is that?! 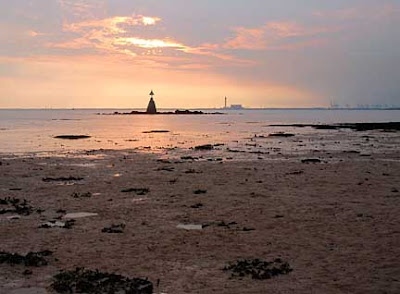 Alas, it was soon time to go home. The sun was setting, the tide was kind of coming in and the weather was really coming in, with drumrolls and a light show. 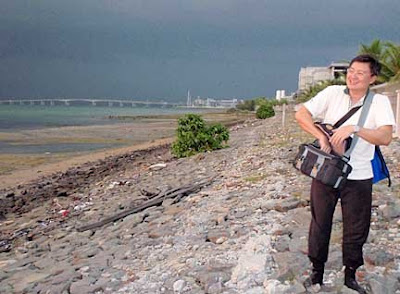 Jeff runs out of batteries just as he was about to take the sunset! Behind him, an ominous Wall of Weather. As we were at the carpark chatting, lightning struck nearby!! We scurried into our vehicles with very hurried goodbyes.

Very grateful thanks to these kind souls who made the trip possible: Sheryl (who took the trouble to make all the arrangements and also called to confirm them despite having to take an exam today) and Helen (who travelled to and from her distant office twice to ensure we got in and out) and their kind colleague (who dealt with all the paperwork); and Collin and friends for arranging the trip.

Today, I saw many of the animals that we have been seeing on Tuas over these past years. And some new sightings such as the many sightings of ball flowery soft corals and special Laganum sand dollars! And my first sighting of 'Nemos' at Tuas.

Just around the corner from this Tuas shore is the massive reclamation at Tuas, and across the Straits are major developments at Johor. We also don't know whether the recent industrial accident at Tuas may have resulted in effluents entering the drains and thus the coastlines. It's good that Schering Plough volunteers are diligently monitoring the shores as part of TeamSeagrass so we can keep track of the health of this beautiful shore.

Other blog posts about this trip
Gorgeous gorgonians of Tuas on the wonderful creations blog.