"While hundreds of balloons flying off into the sky may be a pretty sight, people need to remember that the balloons do not just vanish or vaporise," said Sheri Kristen Goh in a letter to the Straits Times Forum commenting on an event to promote marriage in Singapore. 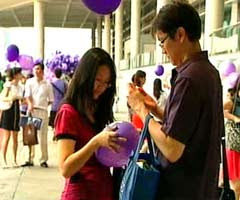 Balloon release at the event from Channel NewsAsia 22 Mar 09
She goes on to outline the consequences of balloons as marine and terrestrial litter, adding "in fact, the mass release of balloons is so problematic, it is illegal in some states in the United States."

See also Celebrate marriage without balloons on the Dee Kay Dot As Gee blog, which also has comments about the event as well as another earlier mass balloon release, ironically for Earth Hour.

As well as reactions to the letter, and documented reports of Death-by-Balloon.

How serious is the impact of mass balloon releases? 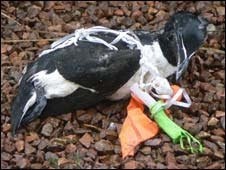 Seabird with balloon remnants around its legs. 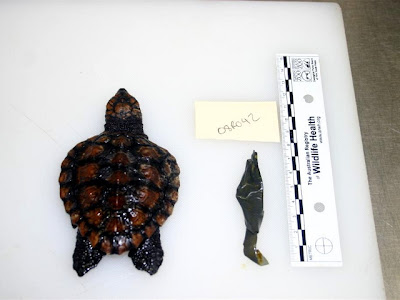 Most balloons are made from biodegradable latex (rubber), which degrades on exposure to air. A balloon industry-funded study concluded that latex balloons degrade at a rate similar to an oak leaf and cease to pose a threat at about six months. However, further studies indicate that balloons floating in seawater deteriorate at a much slower rate, with some balloons retaining their elasticity after twelve months. However long it might take for balloons to degrade, they can certainly stay intact in an animal’s gut long after ingestion, and long enough to cause death by starvation.

Under the UK Environmental Protection Act if a person drops, throws, deposits or leaves anything so as to cause defacement of a public place, they could be committing a littering offence. What goes up must come down! Just because a balloon floats up in the air, it will eventually have to come back down. Thus balloon releases are an act of littering and should be specified as such.

The balloon manufacturers keep close track of these laws!

The UK Marine Conservation Society started a "Don't Let Go!" campaign to raise awareness and stop balloon release which includes a petition, and a list of wildlife friendly balloon uses.

Marine conservationists are calling for a ban on mass balloon releases because birds and mammals are dying from eating discarded balloons.

The Marine Conservation Society (MCS) says organisers of balloon releases should look for different ways to publicise their cause.

The Balloon Association says there is no proof latex balloons kill animals.

But the MCS says it has photographs of dead marine birds and mammals washed up on the beach in Blackpool.

A graphic photo from the examination of a dead turtle shows an old balloon in its gut. The suspicion is that the turtle thought the brightly coloured fragment floating on the water was something edible.

It appears the consequences were fatal.

There is also an image of a decomposed razorbill - a bird which lives on islands off the British coast during the breeding season - with its legs entangled in the string from a balloon.

It is not clear if this is what killed the bird, but it certainly would have hindered its mobility.

Gill Bell, from the MCS, says the problem is getting worse year after year.

"In the last 10 years we have seen a 260% increase in the number of balloons we are finding on our beaches.

"And we know that these are just the balloons on the beaches. We believe there are many more in the water.

"A recent international survey found nearly 60,000 balloons over a two-day period last year. Who knows how many are in the sea. It's vast and we just don't know."

I met Gill in the harbour at Seahouses in Northumberland. The area off the coast here around the Farne Islands is a European Marine Reserve, but still there is evidence of balloon pollution.

In a 100m stretch of beach we find two balloons and their strings tangled up in clumps of seaweed.

We are joined by Mike Hosken who lives in the village. He combines walking his dog with regular litter picking on a stretch of beach between Seahouses and neighbouring Beadnell.

He often finds old balloons and, if he can identify where they have come from, he sends them back.

"One of the recent cases - and remember we are on the north-east coast - was a balloon from Gloucester city.

"They come from everywhere. Statistically it may not be a huge pollution, but it's wrong and needless."

The Balloon Association, which represents manufacturers, says the industry drew up a code of conduct for balloon releases in conjunction with the MCS.

In a statement, it said: "Latex is fully biodegradable and an inflated latex balloon decomposes at about the same rate as an oak leaf under similar conditions."

The MCS is now trying to persuade local authorities and organisers of balloon releases to do something different.

They say they are not being killjoys, but suggest that balloons are just filled with air rather then helium. It's the helium balloons that float high up into the air and drift for miles.

They have had some luck. A car dealer filled a car with balloons rather then releasing them.

Here in Northumberland, a local supermarket in Alnwick was also persuaded not to release hundreds of balloons because of concerns for wildlife.

They acknowledge that some balloons are biodegradable, but argue this is a very slow process, especially in water.

They also believe that if people spared a thought for where the balloons they release may end up, they may decide not to let them go in the first place.