There's a little stream that still flows freely into the sea, which we cross on the way to the more famous Sungei Buloh Wetland Reserve. 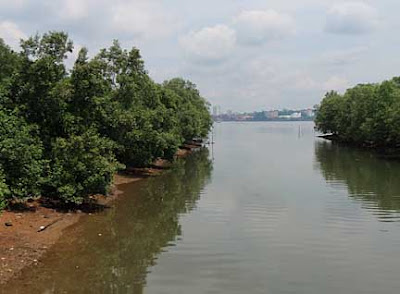 I've always said to myself that I would stop and have a look, and today was finally the day! I thought I'd just take a quick stroll and went with little Sneaky Camera, giving the Big Baby a rest. 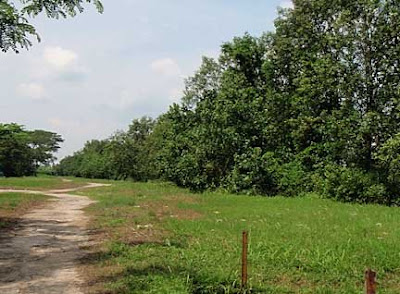 There's a little dirt track next to the fringe of mangroves trees along the stream. Although the stream is canalised in its upper reaches as it flows next to the factories of Kranji, it has natural mud banks near the mouth at the sea.

An assortment of mangrove trees and plants have settled along the mud banks.

There were lots of beautiful tall Api-api putih (Avicennia alba) trees with long narrow leaves that are white below. And they were crowded with yellow blooms!

There was a small Api-api luda (Avicenia officinalis) tree, with healthy shiny green spoon-shaped leaves. It was flowering too! This tree is not as commonly encountered in our mangroves as Avicennia alba. So it was nice to see it.

And a small Api-api bulu (Avicennia rumphiana) with fuzzy wooly leaves. It wasn't flowering though.

And there was an odd Avicennia tree with broad leaves.

That don't seem so white underneath

But the flowers look very much like Avicennia alba. And indeed A. alba leaf shape can vary (as I remember Dr Jean Yong's sharing) so it's probably an A. alba.

There were also lots of tall Perepat (Sonneratia alba) trees.

And a little one too. As Dr Jean Yong taught me, you can tell it's S. alba from the little touch of pink at the end of the leaf.

There were even Teruntum putih (Lumnitzera racemosa)! A few small bushes and one tall tree. These plants are listed as 'Endangered' in the Red List of threatened plants of Singapore. So it's great to see them.

There were also several Buta-buta (Excoecaria agallocha) that were in full bloom. I did an entire post about these gorgeous plants.

Everywhere, the trees were draped in Common derris (Derris trifoliata) and they were blooming! In some parts, the delicate pink blossoms gave an almost bridal atmosphere.

There were a few clumps of Piai or Mangrove ferns (Acrostichum sp.). The bright red young leaves suggest these are Piai raya (Acrostichum aureum).

There were lots of Sea hibiscus (Hibiscus tiliaceus), many growing into tall trees. 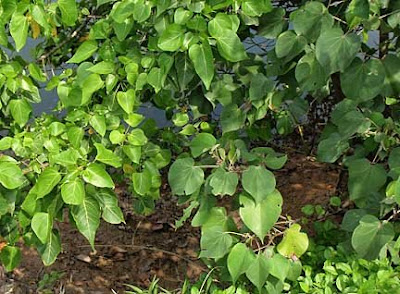 But also the less common Hibiscus look-alike. Can you spot it in this photo?

While both have somewhat heart-shaped leaves, the less commonly encountered Baru-baru (Thespesia populnea) has more pointed leaves (photo the left). While the Sea hibiscus leaf is in the photo on the right.

According to Burkill, the Sea hibiscus is "one of the most important fibre-plants among the inhabitants of Malaysia". Fibres from the plant were used to make cords for fishing lines and nets, harpoons to catch dugongs, in elephant gear for dragging timbers as well as woven into bags or used to caulk boats.

Under the big trees were a few short Noni or Mengkudu (Morinda citrifolia) trees. The fruits and other parts of the Noni tree are not only used in a range of traditional medicines, but the roots were in the past also a source of dyes for making batik.

As well as small clumps of Sea holly (Acanthus sp.). These plants have no relation whatsoever with the Christmas Holly, although the leaves appear similar. 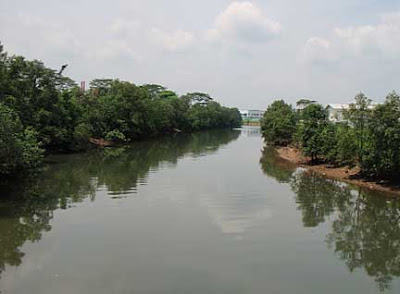 There's a road bridge across the stream. On the bridge was this large tree with pink and black 'fruits'.

It had long hair-like roots so it's probably a fig tree. I have no idea what particular kind of fig tree it is though.

Next to the bridge was a large Rhu (Casuarina equisetifolia). It's bearing fruits, though Sneaky Cam is too feeble to take photos of the flowers. Here's an earlier post all about blooming Rhu trees.

Other plants include climbers like this Morning glory (Ipomoea cairica) which had swarmed over a Sonneratia tree. Oh dear. 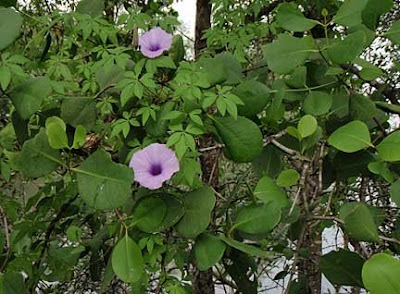 And this bush next to the road, with glossy leaves and bright orange blossoms.

I don't know what it is. I suspect it's a horticultural and not a wild plant.

On the way home, I tried to find a way to get to the massive monstrous and must-be-gorgeous mangroves of Mandai. The last untouched mangroves in our North. Through a narrow path, I managed to get a peek at it. 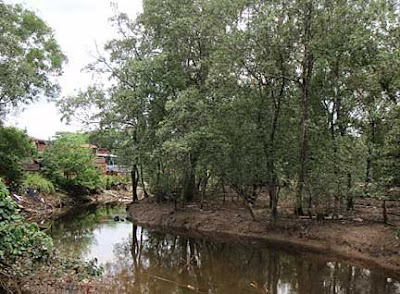 It sure looks lovely! 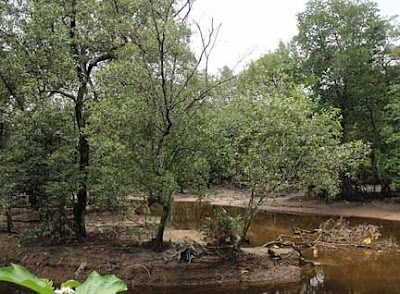 And extensive! It's not good to go to new places alone and when the tide isn't quite suitable. So perhaps I'll come back another time with some intrepid companions.
Posted by Ria Tan at 3:36 PM