Identified as a new species, this fish doesn't so much swim as hop. Each time it strikes the seafloor it uses its fins to push off and it expels water from tiny gill openings on the sides to jettison itself forward. With tail curled tightly to one side it resembles an inflated rubber ball bouncing hither and thither. Such behaviour has not been observed in any other fish. 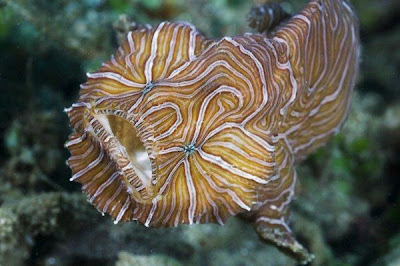 More than a dozen individuals have been seen in Ambon Harbor, Indonesia, since divers with Maluku Divers first spotted one of the fish in January 2008. The fish have been found in 15 to 25 feet of water near a commercial jetty in the busy harbor. (Copyright David Hall/seaphotos.com)

It has an extremely gelatinous skin that is very fleshy, thick and loose. The striking striped pigmentation could help the fish blend in among colorful, venomous corals. Its flattened face may give it binocular vision, like that of humans. Most fish, with eyes on either side of their head, don't have vision that overlaps; instead they see different things with each eye.

Despite its showiness, the fish is shy and secretive, probably one of the reasons it wasn't previously spotted.

Singapore has frogfishes too! But this bizarre species has not been seen on our shores (yet?). More about our frogfishes on the wildsingapore wild fact sheets.

"Psychedelica" seems the perfect name for a species of fish that is a wild swirl of tan and peach zebra stripes and behaves in ways contrary to its brethren. So says University of Washington's Ted Pietsch, who is the first to describe the new species in the scientific literature and thus the one to select the name.

Psychedelica is perhaps even more apt given the cockamamie way the fish swim, some with so little control they look intoxicated and should be cited for DUI.

Members of Histiophryne psychedelica, or H. psychedelica, don't so much swim as hop. Each time they strike the seafloor they use their fins to push off and they expel water from tiny gill openings on their sides to jettison themselves forward. With tails curled tightly to one side –which surely limits their ability to steer – they look like inflated rubber balls bouncing hither and thither.

While other frogfish and similar species are known to jettison themselves up off the bottom before they begin swimming, none have been observed hopping. It's just one of the behaviors of H. psychedelica never observed in any other fish, says Pietsch, UW professor of aquatic and fishery sciences and curator of fishes at the UW Burke Museum of Natural History and Culture. He's the lead author of a paper about the new species that's now online at Copeia, the journal of the American Society of Ichthyologists and Herpetologists. His work is funded by the National Science Foundation.

It was little more than a year ago that the fish with rare, forward-facing eyes like humans and a secretive nature was the subject of worldwide news coverage after having been observed in the busy harbor of Ambon Island, Indonesia. An adult fish was observed in January 2008 by Toby Fadirsyair, a guide, and Buck and Fitrie Randolph, two of the co-owners of Maluku Divers, which is based in Ambon. They and co-owners Andy and Kerry Shorten eventually found Pietsch to help them identify the fish. Since the first sighting divers have observed a number of adults and juveniles, now that they know what to look for.

Adults of H. psychedelica are fist-sized with gelatinous bodies covered with thick folds of skin that protect them from sharp-edged corals as they haunt tiny nooks and crannies of the harbor reef. Fins on either side of their bodies have, as with other frogfish, evolved to be leg-like, and members of H. psychedelica actually prefer crawling to swimming.

The species has a flattened face with eyes directed forward. It's something Pietsch, with 40 years of experience studying and classifying fishes, has never seen before in frogfish. It causes him to speculate that the species may have binocular vision, that is, vision that overlaps in front, like it does in humans. Most fish, with eyes on either side of their head, don't have vision that overlaps; instead they see different things with each eye.

DNA work revealed that H. psychedelica joins two other species in the genus Histiophryne, though the other two are very drably colored in comparison. The genus is but one of about a dozen in the family Antennariidae, known as frogfish in most places in the world. The frogfish are, in turn, part of the larger order of Lophiiformes, or anglerfish. Pietsch is the world's foremost anglerfish authority and, when sent a photo last year of the newfound fish, he said he'd stake his reputation that it was an anglerfish.

He was right. But what an unusual member it turned out to be.

Compared to other anglerfish, members of H. psychedelica have no lures. Most anglerfish have lures growing out of their foreheads. The other anglerfish sit right out in the open on the seafloor or coral reefs, often adapting their coloring so their bodies are camouflaged, but the lures are meant to be noticed so the fish wave, wiggle and sometimes blink the lures on and off in order to attract pray, Pietsch says.

Instead of all that showiness, members of H. psychedelica are shy and secretive, probably one of the reasons they weren't previously spotted. When a member of H. psychedelica is uncovered by divers it usually seeks a new place to hide within 10 or 15 minutes.

And while other anglerfish change their coloring depending on the environment, the new species appears to maintain its wild striping no matter the surroundings.

The coloring led co-author David Hall, a wildlife photographer and owner of seaphotos.com, to speculate that the fish is mimicking corals. Indeed, Hall produced photos for the new scientific paper showing corals the animals may be mimicking.

The other co-author, Rachel Arnold, who is a UW master's student in aquatic and fishery sciences, did the DNA work on the new species. Arnold, who dove in Ambon Harbor last year, said the striping of each fish is distinctive, "like a fingerprint of patterning on their body so from whatever angle you look, you can tell individuals apart."

The scientists found, however, that the vivid colors faded in a matter of days once a specimen was preserved in ethanol. The flesh of the preserved specimen looks white, but with a microscope one can still see the striping, Pietsch discovered.

This got him thinking about two specimens sent to him in 1992 that he'd kept as part of the UW's fish collection. The Dallas Aquarium had sent him two frogfish, found in a shipment of live fishes from Bali that they said had unusual pigment patterns. The staff had nicknamed them "paisley frogfish." But the photograph Pietsch was sent was of poor quality and the preserved specimens Pietsch received were white, so he didn't give them much thought.

Pietsch retrieved the old specimens from the collection, put them under a microscope and found the striping distinctive to H. psychedelica. He'd had two specimen of a new species of fish for 17 years, but didn't know it.

See a QuickTime video of a juvenile hopping along – it's also being buffeted by currents – at http://uwnews.org/article.asp?articleID=47496.

Most fish have eyes on the sides of their heads, but a scientist now has confirmed a new and elusive species of carnivorous frogfish with eyes that face forward, like ours. The creature also has a fleshy chin and cheeks, adding to its strange appearance.

The bizarre new species, Histiophryne psychedelica, made a brief splash a year ago when sport divers about 30 feet offshore of Ambon Island, Indonesia, photographed a shallow-water fish not seen before in 20 years of diving there.

Ichthyologist Ted Pietsch of the University of Washington's Burke Museum of Natural History and Culture received pictures of the fish and guessed it belonged to the Histiophryne genus. Now he has confirmed this using genetic and morphological data, and fully described the freaky fish as a new species.

"It is just an absolutely fantastic example of what natural selection can produce," Pietsch told LiveScience. "And it's a fantastic organism in its own right, and that is certainly enough to make it important."

Pietsch's description of the animal, partly supported by the National Science Foundation, is detailed in the journal Copeia.

Other weird things about the fish

The fish is quite a sight: its extremely gelatinous skin is very fleshy, thick and loose; and the skin is covered with white stripes radiating from the eyes and continuing back to the body. This pigmentation could help the fish blend in among colorful, venomous corals on the sea floor in the area.

"The Psychedelic Frogfish probably joins the long list of dishonest and harmless animals that have evolved to mimic the beauty of venomous animals," said Leo Smith, assistant curator of fishes at The Field Museum in Chicago. "Pietsch and colleagues nailed this when they suggested that it looked just like the venomous corals found in its environment."

The fish also has some plastic abilities.

"This animal seems to have ability to flare its face out and then pull it back again, so when it comes through a small crevice, those eyes become lateral and then it flares its eyes out," Pietsch said. "It's also probably a threat display - when it shows that oval face with the psychedelic striping, you think that'd scare something away."

The fish might have sensory structures along the outer margin of its face that would have a protective function like cat whiskers to enable it to sense the internal walls of a little cavern or a little space between coral, he said. Other fishes with forward-facing eyes include monkfishes and goosefishes.

The fish's jaws are lined with two to four irregular rows of small teeth, which it uses to consume smaller fish, shrimp and other marine life.

The fish tend to hang out in pairs, and are often so well hidden that they could only be found when divers looked under rubble on the seafloor. Once uncovered, the fish immediately tried to wriggle out of sight by entering a crevice or hole via rigorous twisting and turning of the body and use of its pelvic fins to manipulate its position, like we would use our hands. Yet the fish later show no signs of damage.

The fish get around in the sea via jet propulsion, or forcefully expelling water through openings in the body. The specimen that Pietsch studied was collected by his graduate student Rachel Arnold and photographed by David Hall.

People have been diving intensively in this region for more than 20 years, yet the new species was only noticed, near Ambon Island, last year by employees of Maluku Divers. In June 1992, staff at the Dallas Aquarium also noticed two frogfish with an unusual pigment pattern, found in a shipment of live fishes from Bali, Indonesia, but no one had time to examine them for years.

So, it's a mystery as to where the fish came from, Pietsch said. It could have been living for years in deeper waters, and then come into shallower waters recently for some oceanographic reason in the last season.

"It seems that some of these animals do a bit of moving up and down into deeper water," he said. "We know they come up in shallow water to spawn and reproduce, but that cycle should've been noticed in past years and it really wasn't."

Many animals with brilliant pigmentation, like the new frogfish species, are toxic. The colors warn other animals not to eat them. However, there is no toxicity ever recorded with this group of animals, Pietsch said.

Sadly, Pietsch has no access to specimens for now.