Hot day at Pulau Semakau with dragons and damsels

On a scorching afternoon, the Semakau Book team was out to document the public intertidal walk by the Raffles Museum of Biodiversity Research. We were joined by the intrepid Dragonfly Team of Tang and Eric. 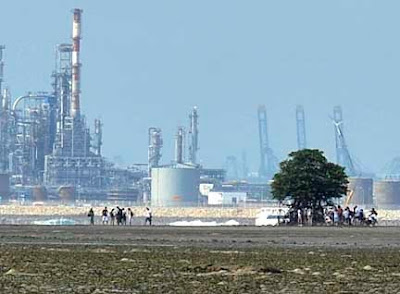 Here's the visitors for the public walk out on the vast shores. Although Semakau's natural shores are next to the industrial installations on Pulau Bukom, it remains very much alive!

I decided to start exploring the shores from the Southern most tip. The sand bars there were full of Common sea stars (Archaster typicus) and lots of Cake sand dollars (Arachnoides placenta). 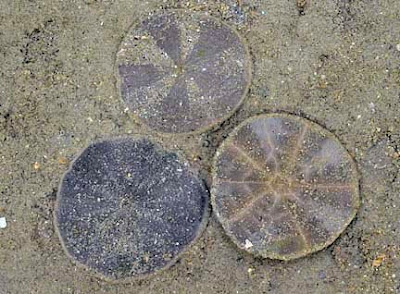 Alas, I didn't see any special sand dollars or other strange sea stars.

There were, however, many Sundial shells (Family Architectonicidae). They were not alive but were occupied by hermit crabs. I've never (yet) seen a living Sundial snail.

Another strange snail shell was this elegant one. 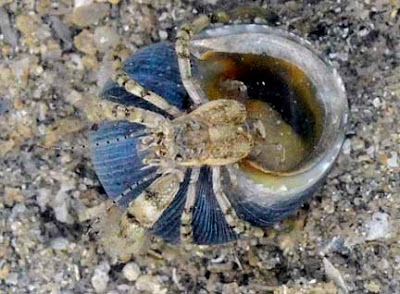 It was occupied by a feisty hermit crab. I have no idea what kind of snail made this shell. 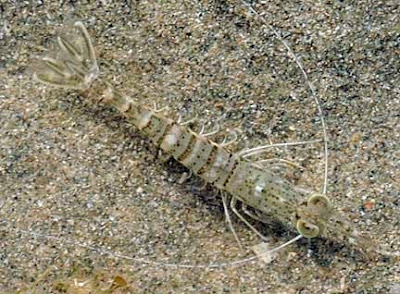 In the sand were various shrimps, such as this pretty one. And in the areas with short seagrasses were lots of small swimming crabs, an elbow crab and other splashing, zippy gobies and other fishes that disappeared into holes in a flash. 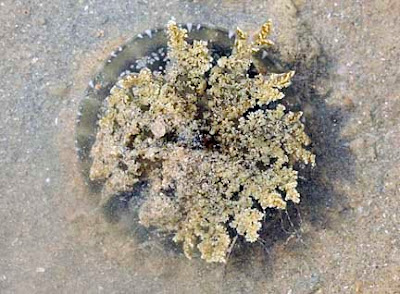 I came across a stranded Upside down jellyfish (Cassiopea sp.) and it was much happier after I put it in a pool. Pulau Semakau is the only place I know where these strange animals can be commonly encountered. 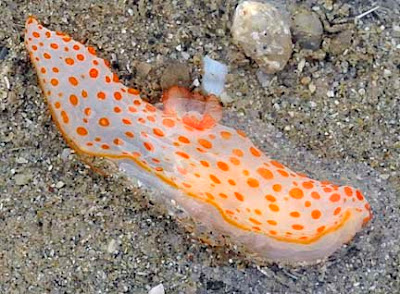 There was also an Orange-spotted gymnodoris nudibranch (Gymnodoris sp.) that didn't look very well under the hot sun. This slug is also commonly seen on Pulau Semakau.

As I headed back to the middle of the vast shores, in the coral rubble area were lots of little animals. 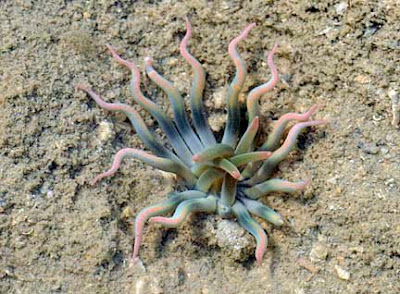 Like this very pretty Wriggly star anemone, whose name we have yet to find out. 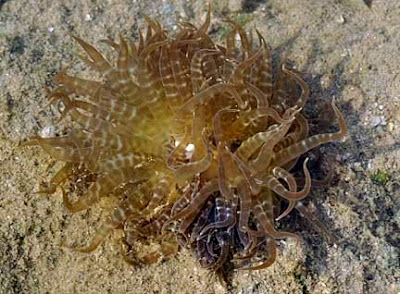 And a swimming anemone (Boloceroides mcmurrichii), that wasn't looking too lively. It was probably just as hot as I was feeling under the blazing afternoon sun. 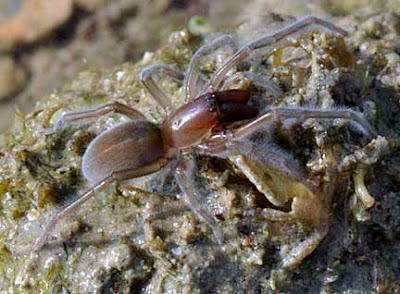 The busy Marine spider (Desis martensi) didn't seem too bothered by the heat.

Another very energetic creature was this little green crustacean that zipped around and luckily stopped for a moment right in front of me! 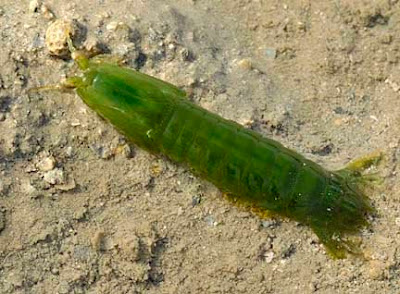 It is a Smasher mantis shrimp (Gonodactylus chiragra)! This animal is NOT a shrimp and belongs to a different Order Stomatopoda. It uses its club like front limbs to smash open the shells of its prey! 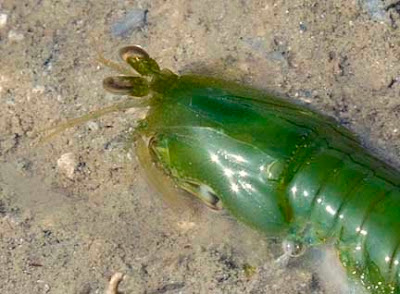 I only managed one shot of its side view to try to get a glimpse of the club-like front limbs folded under its body, before it shot away again into a hole.

Equally active were these worm-like animals, which are actually fishes! 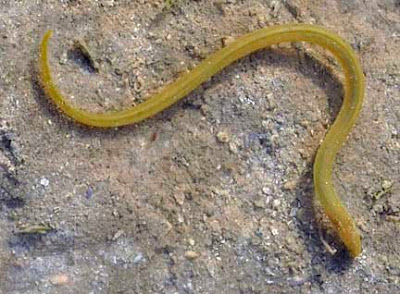 The Worm-eel (Muraenichthys sp.) is perfectly suited for squirming into holes and crevices to search for edibles. Which it does with great enthusiasm. It has a sharp pointed tail so it can even burrow backwards! 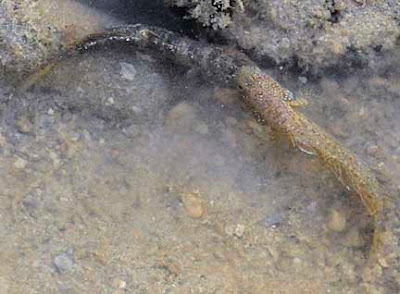 And in a pool of water, was this pair of fishes that were at first splashing about then stopped just for a moment, before disappearing into a nearby crevice. 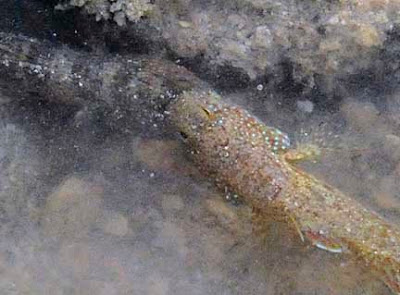 It sure looks like the spotted fish was trying to eat the banded one, even though it's nearly the same size as itself! It all happened in a splash and flash.

A more sedate resident was this Ovum cowrie (Cypraea ovum). 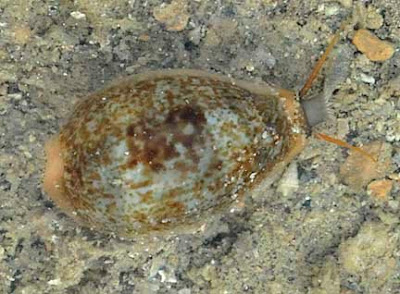 To identifiy these snails it's good to have a look at the underside, especially at the 'teeth' at the shell opening. 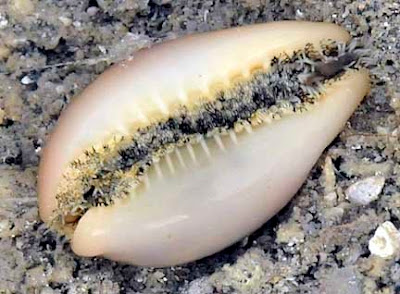 The Ovum cowrie has 'teeth' that are tinged orange or yellow. This cowrie produces a lot of sticky mucus that is really hard to get rid off, so I don't like to handle it. 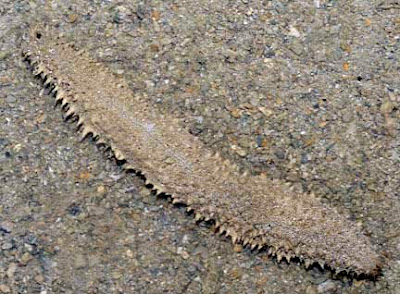 There was also this very large Beige sea cucumber that looked just like the surrounding sand. 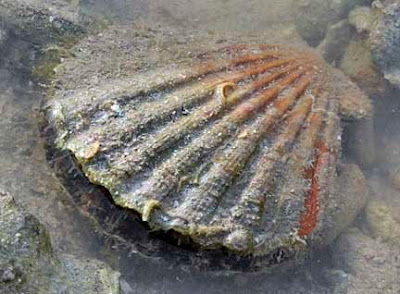 Near the public walk trail was a pool with a live scallop! These clams of the Family Pectinidae can move backwards.

And next to it, a pretty pink Heart cockle (Corculum cardissa), which I later learnt that Chay Hoon had found.

Parts of the reefs were thick with Sargassum seaweed (Sargassum sp.) so it was hard to see any of the hard corals. 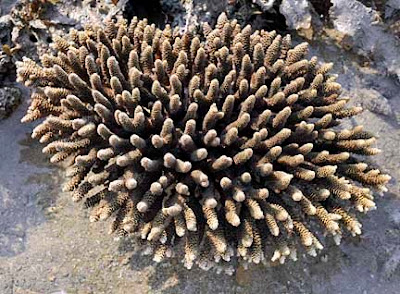 But this well-shaped Acropora hard coral (Acropora sp.) was among the few that could be seen. These delicate branching corals are not very commonly seen on our shores.

Hard corals are colonial animals made up of many tiny polyps, each building its own tiny skeleton called a corallite. 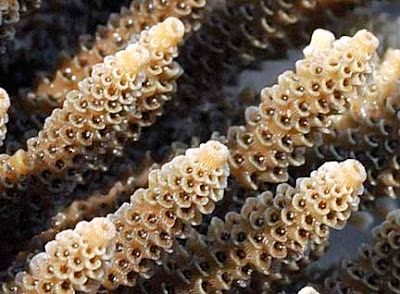 Here's a closer look at the typical form of the Acropora 'branch' with a large knob-like corallite at the tip, and little cup-shaped corallites all around the 'branch'.

Although the Sargassum was annoying to me, it is a great boon to the animals that live on the shore. It would provide shelter and food. 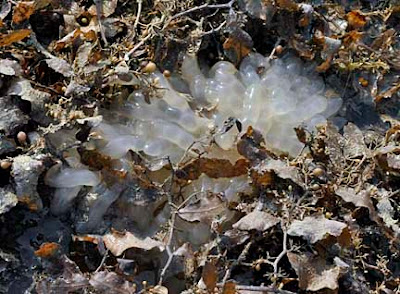 And for cuttlefishes and squids, a great place to attach their egg capsules. I came across this bunch of sausage-like egg capsules among the seaweeds. This is why we should avoid stepping on the seaweeds.

A trip to Pulau Semakau would not be complete without a look at the Knobbly sea stars (Protoreaster nodusus). 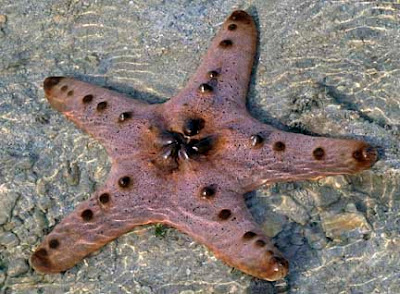 There was this large pink one. 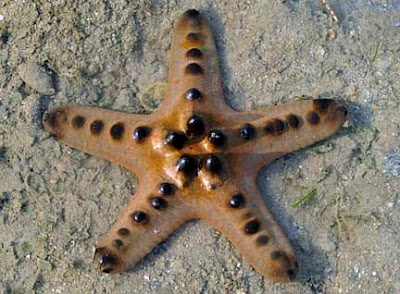 And a smaller brown one! Finally, the sun set and it cooled down a little. But the tide was also turning so we had to go home.

On this trip, we were joined by the very companionable and enthusiastic dragonfly team of Tang and Eric. They found interesting dragonflies and damselflies, some of which are considered less common. Not only that, Tang also spotted a goby-snapping shrimp couple while he was on the shore! I also learnt a lot about these fascinating insects from them. With their invaluable help, the beautiful flying dragons and damsels of Semakau will have a chance to be known and featured in the Book.