The amount of trash on Singapore's shores can be heart-breaking. Once a year valiant volunteers mount a blitz on marine litter.

Is there any point to cleaning up the shores just once a year?

The effort is not just to gather trash, but data on the trash. The operation is done professionally. Months before the date, there are countless runs of briefings to explain (a) Singapore has marvellous marine life (b) WHY litter is bad for marine life and humans.

The data reveals clearly the sources of litter (us) and it doesn't take much to join the dots on what we can do as individuals.

After seeing the data, I personally never use a straw anymore. I say, a human above the age of 2 doesn't have to suck at drinks. And to use a plastic object for a few minutes and then throw it away is just wrong.

The lasting change hopefully takes place through the thousands of ordinary people that take part in the effort. A change in their attitudes, which they can share with those around them.

Enough talk, it's Time for Action! Haven't signed up yet? There's still places for the clean up at Pulau Ubin.

Behind this mammoth effort were months of planning and briefings for the various coastal locations. 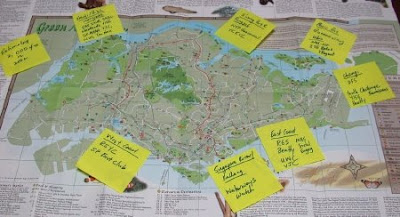 And recces over the this weekend to Kranji, Kallang Basin, Pandan mangroves and more.

Coastal Cleanup is not just about picking up litter. It is about collecting data about marine litter.

Where does all the trash come from? The source of the trash is also recorded.

Data from 2007 reveals 49% of the trash is a result of "Shoreline and Recreational Activities", 7% from "Ocean/Waterway Activities", 12% from "Smoking-Related Activities" with 28% categorised as "Debris of Local Concern". This is a typical scene on East Coast Park. This was taken at sunrise. Obviously, someone had breakfast and just walked away. There was a rubbish bin about 10 paces away.

The Cleanup in Singapore is part of International Coastal Cleanup run by the Ocean Conservancy. It is the world’s largest volunteer event of its kind. Last year, 378,000 volunteers from 76 countries and 45 states cleared six million pounds of trash from oceans and waterways and recorded every piece of trash collected.

In Singapore between 2001 - 2005, volunteers removed 33 tonnes of marine trash from our beaches and mangroves and recorded all aspects of this trash.

Plastic litter is particularly insidious as these last for a long time, choking and killing marine life that accidentally eat them. Plastic litter breakdown into smaller and smaller pieces and end up in the food chain and thus eventually, in humans.