In the fierce competition for real estate, some seaweeds unleash chemicals to deter baby corals from settling down. 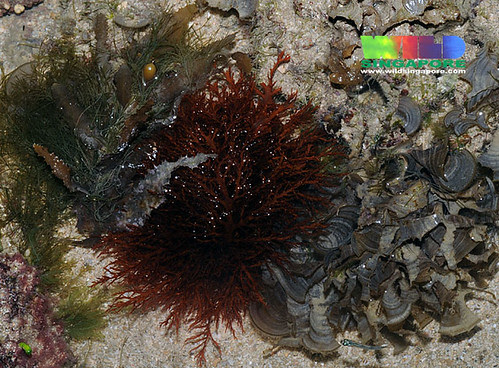 Thus animals that graze on seaweeds such as sea turtles, fishes, slugs and snails play an important role in the balance of life on the reefs. Over-fishing, over-collection of seaweed eaters can affect this balance.

Scientists have found a new challenge for the world’s struggling coral reefs: seaweeds releasing chemical weapons that prevent the corals from recovering after a disaster.

A ground-breaking discovery by Australian researchers has proved that some sea weeds, or algae, produce toxic chemical signals that deter coral larvae from settling on reefs devastated by bleaching, storms or other impacts. The good news is that the clever little coral larvae may also use the algal chemicals to find a good home.

“Seaweeds produce a wide range of chemicals, some of which encourage coral larvae to settle and some of which repel them,” says Dr Laurence McCook of the ARC Centre of Excellence for Coral Reef Studies (CoECRS) and the Great Barrier Reef Marine Park Authority. The research was partly funded by an international Pew Fellowship award for Marine Conservation, and the team includes Chico Birrell and Lindsay Harrington, of James Cook University, and Bette Willis (James Cook University) and Guillermo Diaz-Pulido (University of Queensland) of the CoECRS.

Chemicals released by the algae into the water can have a significant impact on the success of coral recovery after damage. “We looked at three kinds of sea weeds and found that a green seaweed called Turtle Weed had a powerful deterrent effect on coral larvae, which refused to settle and appeared stressed. Larvae had difficulty settling with a second seaweed and a third produced chemicals that actually encouraged coral settlement” said Prof. Willis.

These chemical mechanisms may have important implications for the long-term survival of coral reefs globally and their ability to regenerate after damage from coral bleaching, which is expected to become more frequent and devastating under climate warming, Prof. Willis says.

Dr McCook says that, following damage to a reef, algae nearly always beat the corals in the race to resettle the devastated area. A lot then depends on which algae dominate the new system – and whether there are enough fish, turtles and other herbivores around to ‘mow’ the weeds and give the corals a chance to re-establish. The scientists published a detailed survey of research into the effects of different seaweeds on the recovery of corals. The team concludes that the role of weeds in influencing coral recovery has important implications for the fate of reefs – and for how they are managed.

“On the Great Barrier Reef we have been relatively lucky, but elsewhere we have seen a number of instances where seaweeds simply took over the reef, completely preventing the corals from coming back. The greatest threat seems to be when we get thick mats of algae combined with sediment runoff, which smother the reef and stop corals gaining a foothold – a serious problem for our coastal reefs.”

“These conclusions underline the difficulties that face a reef in recovering from a major setback – and especially the role of humans. If we remove all the fish that mow the weeds, or if we release large amounts of sediment and nutrients from the land to build these toxic algal mats, it makes it almost impossible for the corals to come back,” he says.

However, he cautions, the picture is not simple. Some weeds repel corals but others, like calcareous red algae, play a vital role in reef building and help the corals to re-establish.

Algae also influence the amount of offspring corals have, the space and sunlight available for them to settle and in some cases even shove the newly-settled corals off their rocky perches.

The team cautions that it is still unclear how much which seaweeds affect whether or not a coral reef can recover from a major setback. But the importance of effects such as the chemical warfare has probably been underestimated.

“These issues are likely to play a major role in the resilience of coral reefs worldwide, and in their ability to withstand or bounce back from the stresses of climate change,” Dr McCook says. “We need to understand these effects if we are to look after our reefs and give them the best chance of survival in the long run.”