Started in Mar and supposed to end this month, works has been extended for another six months to Mar 09.

What are some of the adverse effects of dredging?

This is a revision of Port Marine Notice No 63 of 2008. The working period has been extended.

24 hours daily, including Sundays and Public Holidays except for Sector C, where only night operations (1900 hours till 0700 hours) will be carried out.

Sand mining will be carried out by the TSHD within the working areas . There will be occasional survey work carried out by DHI survey vessel as required.

Proper precautions will be in place and a safe distance of more than 250-metre from the dredger will be kept when such operations are carried out.

Further enquiries relating to operation can be directed to Mr S Y Yoon, the project coordinator, at Tel: 9795 5884, email: bluewind0507@hdec.co.kr

What is involved in this kind of work?
Here's some information about dredging on wikipedia

A trailing suction hopper dredger (TSHD) trails its suction pipe when working, and loads the dredge spoil into one or more hoppers in the vessel. When the hoppers are full the TSHD sails to a disposal area and either dumps the material through doors in the hull or pumps the material out of the hoppers. Some dredges also self-offload using drag buckets and conveyors. 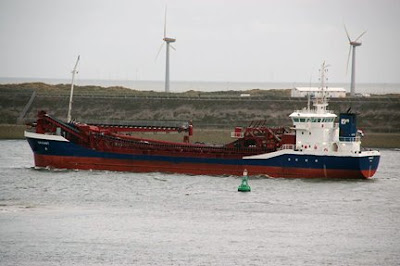 From the wikipedia site, this is what a trailing suction hopper dredger (TSHD) looks like. So this is not the sea monster that November saw.

What are some of the environmental impacts of dredging?
More information about dredging on wikipedia (in brackets are my explanations of 'cheem' science words).

Dredging can create disturbance to aquatic ecosystems, often with adverse impacts. In addition, dredge spoils may contain toxic chemicals that may have an adverse effect on the disposal area; furthermore, the process of dredging often dislodges chemicals residing in benthic substrates (sea bottom) and injects them into the water column (basically, stirs things up).

The activity of dredging can create the following principal impacts to the environment: