Lightning: the scariest thing on the shores

The scariest encounter on the shore is not any kind of marine life, but lightning. We are often oblivious to the weather as we explore the shores. 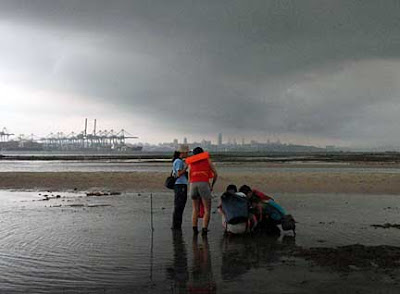 Today, there was a report of a couple struck by lightning. They were fishing on Punggol Jetty.

Here's what I found out about lightning in Singapore.

Why does Singapore have one of the highest rate of lightning activity in the world?
Lying near the Equator, the weather is hot and humid almost all year round. Conditions are favourable for the development of lightning producing thunderstorm clouds.

How often does lightning strike in Singapore?
An average of 171 thunderstorm days (days when thunder is heard) are recorded annually in Singapore.

Is there a lightning 'season' in Singapore?
The monthly distribution of the number of thunder days shows a peak in April/May and November, with an average of 20 thunder days and a low of 4 to 6 days in the months of January and February respectively.

What time of the day does lightning most frequently occur in Singapore?
Thunderstorm tend to occur between 2 pm and 6 pm in the afternoon for all months of the year as diurnal heating and convection play an important role in thunderstorm development here.

What damage can lightning cause?
While most lightning strike the ground harmlessly, their destructive power can be tremendous. Lightning can ignite forest fires, damage electronic equipment, disrupt electrical power and telecommunication systems. Lightning also cause damage to trees in parks and gardens.

The SICC website posted these photos of lightning damage. 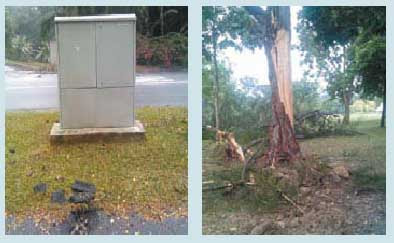 The photo on the left shows a direct hit to the bitumen cart path. The chunks forced out by the lightning weighed about 5 kg each. This Casuarina tree in the photo on the right was destroyed by a lightning strike. Mud was thrown over the cart path where the strike grounded out. Portions of the tree were found up to 20 metres away.

See also Lightning strikes the Merlion. This happened on 28 Feb 09 and damaged this Singapore icon.

How does lightning hurt people?
There are two major causes of injuries and deaths from lightning. One is being struck directly and the other is a phenomenon known as 'side flash'. A side flash can occur when a person standing near a tree or metal pipe, frame or unprotected shelter (particularly those with metal roofing) touches these objects or are close to them when a lightning discharge occur. The person becomes a convenient conductor for the electric current to the ground and hence is injured or killed.

How many people are hurt by lightning in Singapore?
In Singapore, records on lightning fatalities show an average of 0.35 deaths per million population (year 2000-2003) as compared to 0.6 in the United States, 0.2 in the United Kingdom and 1.5 in South Africa. Also deaths from lightning are higher in April and November. The victims were often in open areas such as sea, beaches and football fields.

Also most deaths in sheltered areas occurred while the victims were under a hut, a shed or trees. (Hmm ... so taking shelter doesn't seem like a fool proof way to avoid lightning strikes).


A special material called EquiVolt conducts electrical currents during a lightning strike keeping those beneath it safe. The lightweight material — the first of its kind — can be used to make raincoats, tents and groundsheets.

Most fatalities and injuries are not caused by lightning striking a person directly, but by it hitting the ground and generating voltage differences, said Prof Liew from National University of Singapore's Electrical and Computer Engineering Department.

"A person standing in the vicinity would have differences between his or her legs, which would then result in the person getting electrocuted," he explained.

The solution, he said, was not an insulating material, but rather a conducting material that equalised the voltage differences, leaving the person standing on the fabric or in a tent unharmed.

NewScientist on 23 Aug 07 also reported the development of a portable pyramid made of aluminium tubing. Interestingly, it was reported that "research on the device followed a request from the Ministry of Defence in Singapore".

How does NEA monitor lightning in Singapore?
Besides visual observations and the use of weather radar, the Meteorological Services Division monitors the development and movements of lightning activities within 250 kilometre range of Singapore with an advanced lightning detection and tracking system.

What kind of weather is associated with lightning?

Thunderstorms and the associated lightning activities, unlike large scale weather systems such as typhoons and hurricanes, are relatively short-lived severe weather phenomena. Each individual thunderstorm cloud normally has a life-span of 1 to 1.5 hours and covers a horizontal distance of a few kilometres. Larger storms which last longer are usually made up of a congregation of several smaller individual thunderstorm cells. A thunderstorm usually moves and changes its shape as it grows and decays. New cells usually form near existing storms.

What kind of lightning warnings does NEA provide?
Information on the expectation of lightning activity is provided by the Meteorological Services Division through its 12-hr local weather forecasts. Besides being broadcast by radio stations, the forecast can be obtained from the telephone Weather Information Dissemination System (WIDS). Also lightning risk watch is provided to specific users on a subscription basis.

Why do some people die from lightning strikes but some do not?

Short answer: Harm depends on variables (Basically, in my opinion it's really about being reckless AND unlucky).

Gruesome details: People hit by lightning suffer both extreme heat and damaging electricity from the bolt. Direct hits are not the only danger however. In open terrain, nearby strikes also can electrocute.

If I am wearing a rubber shoes and a bolt of lightning strike me, will I get electrocuted?

Gruesome details: A lightning bolt (on average) has pushed its way through kilometres of air, so it will not be stopped by a few cm of rubber. People who have been struck by lightning often get their shoes (and/or clothes) blown off or blown apart from the powerful shock wave produced by the lightning strike. Similarly, rubber tires of a car provide no protection from lightning. The steel frame of a hard-topped vehicle provides increased protection if you are not touching metal.

During rainy days, when there is thunder or lightning, we can't swim in the swimming pool because we will get electrocuted. But what about fish in ponds, lakes and oceans, won't they get electrocuted?

Short answer: When you swim in open water, your head above water naturally becomes the closest object for lightning to strike.

Scientific explanation: When lightning strikes the surface of open water, the electrical energy is distributed to the vast body of water. As a result, the damage done to freshwater and marine life is minimised.

Final comment: This is why it is important to keep an eye on the weather during shore trips. To pack up and leave or take shelter BEFORE lightning starts to discharge. Not all shelters will protect you in lightning. Only those armed with lightning protection (fortunately, this is the case for most public shelters in our parks).