A study of erosion at Sungei Buloh Wetland Reserve is being done.

Read more about it in today's article: Sungei Buloh erosion: How bad? Study on, by Tania Tan and Ang Yiying, Straits Times 19 Aug 08; on the wildsingapore news blog

Coastal erosion is an issue on many of our shores.

East Coast Park is one of the places where this is most obvious: this photo was taken in May 08. 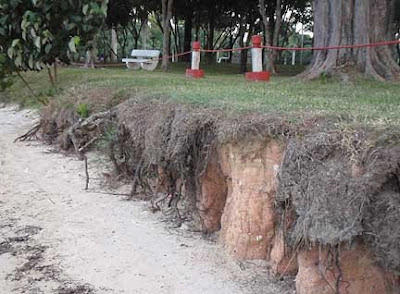 What causes coastal erosion? What can and has been done about it?

Here's some old media articles about erosion on some of Singapore's shores.

Excerpts from Reclaimed land under threat, by Radha Basu The Straits Times 6 Mar 06; on the wildsingapore website

Severe erosion over the past few years has caused parts of the reclaimed shoreline along the East Coast Park and Pasir Ris to recede.

The Building and Construction Authority (BCA) told The Straits Times it has commissioned a detailed survey to study the extent of the damage and to recommend measures to help solve the problem.

Surveys mapping the physical contours of the beaches and surrounding waters are under way. The final report may take up to two years to complete, said a BCA spokesman.

One possible reason for the excessive erosion is that the breakwaters - stone and concrete structures built to protect the beaches - have not been as effective as expected.

When the beaches were first reclaimed, the elevated breakwaters were intended to protect the shore immediately behind them, leaving natural erosion to occur along the unprotected parts.

However, it now appears that in some parts of the beaches, including the Costa Sands area at East Coast Park, erosion may have occurred even behind the breakwaters, causing chunks of the shoreline to recede.

This could be because the height and force of the waves have been greater than anticipated. 'In areas, the waves could have gone over or around the breakwaters, causing portions of the beach directly behind these structures to erode,'

And here's a 2004 story about the erosion on West Coast Park from the habitatnews blog.

RECLAIMED land in West Coast Park is slowly being reclaimed again - by the sea.

Soil erosion has left the shoreline in a sorry state. In the past two years, it has receded by at least 3m in some parts.

Park visitors and boatmen who work there are upset about this.

But Mr Teh Tiong Sa, a geomorphologist (someone who studies the evolution and configuration of landforms) said it's only natural that erosion occurs, especially in areas that have been reclaimed and are not protected from the waves.

He said the erosion is just as bad in parts of East Coast and Pasir Ris parks.

'It's a natural process. It becomes a problem only when people do not anticipate the erosion by leaving a buffer zone.

'Without the zone, infrastructure like walking tracks and barbecue pits built too near the coastline can be destroyed,' said Mr Teh, 59, a lecturer at the National Institute of Education.

In West Coast Park, several coconut trees have already fallen because of the constant pounding of the waves, and others look threatened.

The shore is littered with sharp boulders and all sorts of rubbish.

The authorities are aware of the situation and had planned to build a seawall at the end of last year.

But the work was postponed. It is now set to begin at the end of this year and is to be completed by late 2005.

A spokesman for the Building and Construction Authority told The New Paper that plans for the seawall had to be changed to accommodate the mooring of sampans there.

Letters complaining about the soil erosion have appeared in The Straits Times forum page.

One of the writers was concerned that children may accidentally fall into the gaps where the sea has taken bites out of the shoreline. That's a drop of about 2m in some places.

West Coast Park was set up in 1979, on reclaimed land. It is barely 1km long, stretching from the Republic Of Singapore Yacht Club to the shipyards at Pandan Crescent.

The rest of the park is well-maintained and has a large playground, cycling and jogging tracks, exercise stations and barbecue pits.

Boatmen who look after sampans there for a living told The New Paper that the problem got worse in 2002.

They used to live on the Southern Islands such as Pulau Sudong and Pulau Brani but were resettled to the mainland in the '70s. Some of them live on the sampans. They said they tried to fight the erosion about 10 years ago, by building a barrier along the coastline with driftwood and boulders.

The boatmen claimed that the park manager told them to remove the wood in 2002.

However, the National Parks Board (NParks), which employs manager, would not confirm this.

One of the boatmen, Mr Tan Ah Jin, 75, said: 'After we pulled the wood out, all the stones started to fall over.'

That, according to the boatmen, is when the erosion accelerated.

Mr Tan added: 'It's become dangerous for us to walk up and down when we need to get to the sampans.

'The place doesn't look nice anymore. Even the coconut trees have fallen down because of the erosion.

'We all hope the authorities will do something about this.'

Another boatman, Mr Wak Yakop Getim, 87, said a cordon was erected recently at the most affected stretch, but people could easily walk around it.

The cordon was extended after The New Paper asked NParks about the situation.

Madam Wu Yiqing, 36, who takes her 6-year-old son to the park, was happy about that. She said: 'It's very dangerous especially for young children. I really like the park but it could be better if they do up the shoreline.

'I don't let my son go near there now but it would be nice if he could play in the sea water.'

She said of the beach: 'It's very dirty and there's a lot of mud. If I want to go to the beach, I would still go to East Coast Park or Sentosa.'

No beach when seawall is built

MR TEH said those who are most likely to be affected by the building of a seawall are the boatmen.

'They would either have to be relocated or provisions would have to be made to build an opening in the seawall to allow the sampans to pass through,' he said.

A seawall is usually made from concrete and quarry stones. Building a seawall is one of the most expensive ways of preserving a coastline, said Mr Teh. But it is also the most long-lasting solution.

It can preserve the coastline but it also means there will not be a beach behind it.

Mr Teh said: 'The two don't go together. When there is a seawall, there won't be a beach because the waves carry sand away from the beach and it is not replaced.'

A spokesman for the Building and Construction Authority said it would build a 500m-long seawall.

The spokesman would not disclose the estimated cost of the project.