Scientists in New Zealand have confirmed that undersea noise on their reefs are due to to the chomping of feeding urchins.

Sea urchins have five 'teeth' that they use to scrape on algae and other encrusting stuff growing on hard surfaces. The sea urchin has a skeleton which is basically a hollow sphere. This sphere amplifies the sound of their teeth scraping! 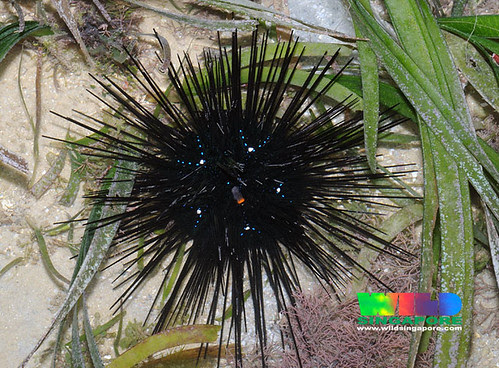 This noise may have a role in reef health!

The scientists also found that "reef fish and crab species swim towards underwater sound, concluding that noise generated around the coast plays an important role in guiding baby fish and crustaceans to a suitable habitat in which they can settle".

The Echinoblog earlier explained how Sea Urchins make a lot of noise when they eat with links to cool sound clips and more articles about chomping urchins.

Here's articles about these findings:

If noisy chewing bothers you, never date a sea urchin.

New Zealand scientists say they have confirmed that the spiny sea creatures are responsible for a mysterious, twice-daily uproar heard underwater.

The 20- to 30-decibel noise is caused by the spiny sea creatures' teeth scraping on reefs as the hungry starfish relatives feed on algae and invertebrates.

The pair recorded two massive spikes in sound intensity each day: The first occurs just before dusk, the other before sunrise.

Radford said urchins had long been suspected of creating the din, but it took a series of experiments to confirm it.

"We put some urchins in a tank and got them feeding on algae, then we recorded them. The noise they were producing caused spikes at certain frequencies."

Those frequencies matched the sonic peaks the team had recorded at sea. The recorded frequencies also confirmed a series of earlier Australian experiments using Helmholtz resonance, the phenomenon of air resonating as it moves in and out of a cavity—as when you blow across a bottle opening to create a tone.

Radford said the nocturnal animals' hard shells produced just such a resonance as they fed with their five-toothed, calcium-carbonate mouths. An urchin's chewing apparatus is called an Aristotle's lantern, due to the ancient Greek philosopher's reference to the mouth's resemblance to a type of five-sided lamp.

"When they emerge from their crevices at dusk, they're probably really hungry, munching away quite rapidly," he said, adding that the din drops off as the night progresses.

"They have another big feed before they go to sleep" at dawn, the biologist said.

On heavily fished reefs—where depleted fish stocks have led to an increase in urchin numbers—the noise was much greater than in reserves where fishing was banned, the researchers found.

Coastal noise of similar frequency and bandwidth has been recorded near the Bahamas; San Diego, California; and Australia.

Chris Tindle, a physicist at the University of Auckland, said the urchins made more noise on dark nights around the new moon.

"It's a huge increase—20 to 30 decibels—which is an increase of a hundred to a thousand times the background level."

Biologists believe the noise of reefs—not just the munching of urchins, but also the pops of snapping shrimps and the grunts of fish—acts as a beacon. The sound may guide larval fish and crustaceans, which hatch in plankton swarms many miles out at sea, to suitable habitats.

"They have to find their way back somehow," study co-leader Radford said. "They've got really impressive swimming abilities—7.8 inches [20 centimeters] a second for a 0.2-inch-long [5-millimeter-long] animal. But they need some kind of cue to swim towards."

In a featureless blue world, he said, "there are no visual cues. So we reckon it's sound."

Tindle, the physicist and marine sound expert, noted that fish larvae have been attracted toward sound in laboratory experiments.

"Whether they are attracted by sound from way out at sea, we still don't know. But we think sea creatures use the sounds coming from different directions to find their way around, to navigate."

Research that shows fish and crabs swim towards the source of underwater sound, potentially offering a technique for re-stocking depleted reefs, has won scientist Dr Craig Radford a prize in the MacDiarmid Young Scientists of the Year Awards.

Using an underwater listening device, Dr Radford identified snapping shrimps and feeding sea urchins as making the loudest sounds beneath the ocean. His study also showed underwater ambient noise around New Zealand’s coast gets louder twice a day with the sound of shrimp rapidly closing their claws and sea urchins scraping their teeth on rocks while feeding being major contributors to increased noise levels at both dawn and dusk.

Craig, who is based at the University of Auckland’s Leigh marine laboratory, is runner-up in the Understanding Planet Earth category of the MacDiarmid Awards, which are presented by the Foundation for Research, Science and Technology with Fisher & Paykel Appliances as principal sponsor.

Fish and crab larvae are frequently dispersed tens of kilometres out to sea and Craig set out to investigate how they get back to the coast. He found that reef fish and crab species swim towards underwater sound, concluding that noise generated around the coast plays an important role in guiding baby fish and crustaceans to a suitable habitat in which they can settle.

Craig says replicating underwater sounds could be a means of attracting fish back to depleted reefs and helping fish and crabs to flourish in reefs which have been slow to colonise.

He is currently completing a post doctoral fellowship with the University of Auckland, continuing research into how larval fish and crabs use underwater sound as an orientation cue. This includes trying to determine the frequencies they are listening to, how loud underwater sound needs to be for them to hear it and how far offshore they can pick up sound.