We saw four Giant clams today at Terumbu Raya, which lies just off the petrochemical plants on Pulau Bukom. 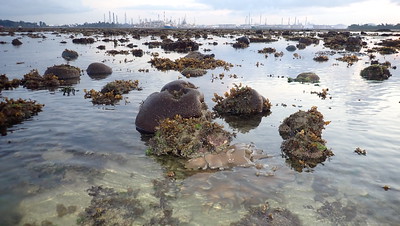 We also checked up on the corals and seagrass situation there.

I came across probably the largest Fluted giant clam that I've seen recently. It was a huge mama about 50cm long! A few steps away was another one, a little smaller at around 35cm. My walking stick is always with me on the shore and it doubles up as a scale. 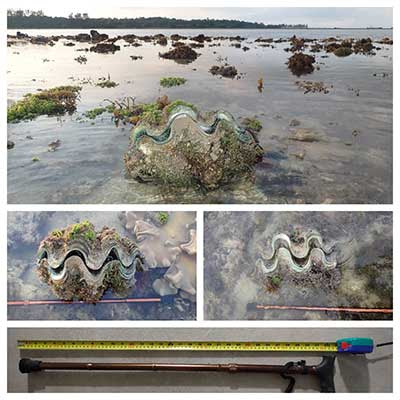 Kok Sheng saw two Fluted giant clams nearby too. They were less than 30cm long.
It was nice to come across a small Leathery sea anemone with pink tipped tentacles - this anemone is not common on our shores. I also saw several Giant carpet anemones, none with anemonefish and one had a very tiny anemoneshrimp. There was a Fire anemone too. The only nudibranchs I ever see are common ones. There were a lot of Cheesecake nudis today, in small groups. 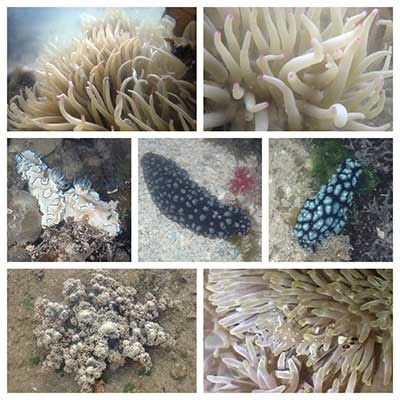 Today, for the first time, I decided to walk to the part of the shore facing Beting Bemban Besar. The shallow seaward edge was dotted with small hard corals. 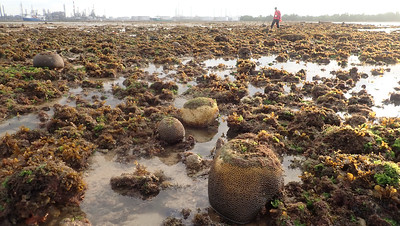 I saw a variety of common boulder shaped corals as well as some mushroom corals. Most of the corals seemed healthy. 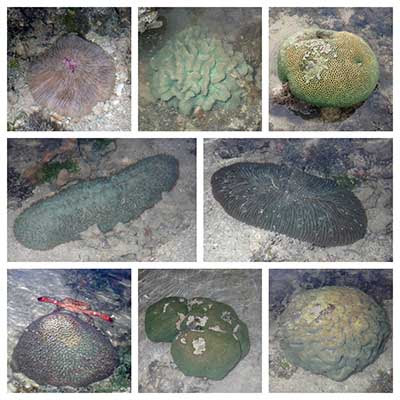 While most of the Boulder pore corals I saw were alright, I did see a few that were pale or had recently dead portions (bluish-grey). Some corals had dead portions, and a few were pale. But I didn't see any mass coral bleaching. 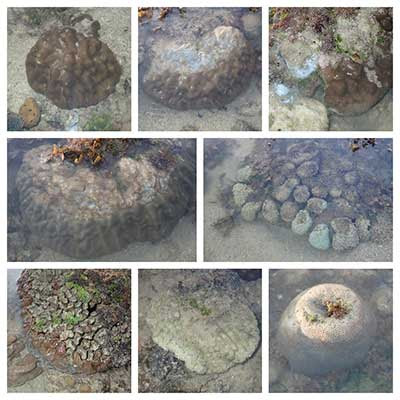 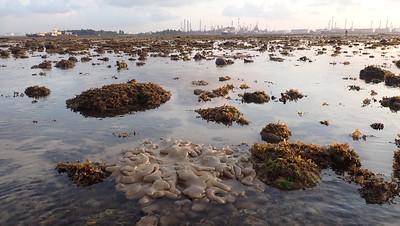 I circled back to the usual shore that we survey, facing Pulau Semakau. I didn't seen much living corals, but the tide wasn't very low and it was a very windy day so I couldn't see into deeper water. The few corals that I did see were alright. We did see mass coral bleaching at this stretch on our last survey  in Jun 2020. Hopefully, the corals are still there and I just couldn't see them today. 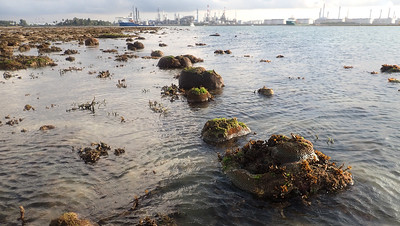 The seagrass situation is probably slightly better than what we saw in Jun 2020. Most of the centre of the flats are bare sand with hardly any seagrass. There were sprinkles of seagrasses toward the seaward edges. Mostly Spoon seagrass and some Sickle seagrass, most were fresh and green - though there was some patches of cyanobacteria. There were some clumps of Tape seagrasses most were cropped short, though I did see some with longish leaves (about 20cm). 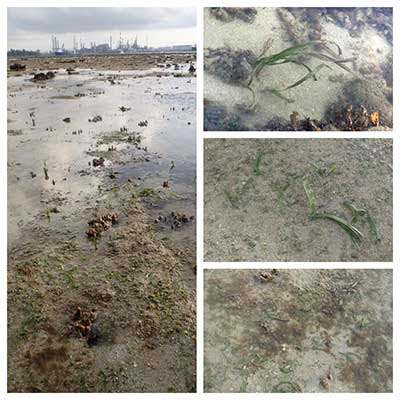 This submerged reef lies opposite Pulau Hantu and the petrochemical plants on Pulau Bukom, and is next to Pulau Semakau.

Some of the team also surveyed Cyrene on this low tide: Jialin Liu, Toh Chay Hoon.