Seagrasses disappearing in Singapore because not enough sex!

Our seagrasses need to have more sex! Thanks to Jose Hong for a great story sharing the work by Dr Siti Maryam Yaakub, Samantha Lai and volunteers of TeamSeagrass, to better understand why seagrasses are dying off at Pulau Semakau and other shores.
What is seagrass sex? And more about what I've observed of our seagrasses disappearing over the years. And how YOU can make a difference for our seagrasses.


"Around three to four years ago, Dr Siti Maryam Yaakub, started noticing that most of the flowers and fruits had simply stopped appearing.

Seagrass populations can grow by cloning themselves, and long-term surveys have indeed seen certain meadows increasing in size, such as those at Chek Jawa on Pulau Ubin.

But Dr Siti said this clonal growth - if it is indeed what Singapore's seagrass are doing could mean all the new seagrass are equally vulnerable to stressors like disease, making it more likely for entire new populations to die at the same time.

Furthermore, without seeds lying around in the environment, it would be much harder for new plants to return.

Ms Samantha Lai, a PhD candidate at the Experimental Marine Ecology Lab at the National University of Singapore (NUS), said there was already one such case on the shores of Pulau Semakau.

In 2009, a seagrass meadow off the island suddenly died, and aside from a few scattered patches of seagrass, the area remains barren, she said.

What is seagrass sex?

The floating male flowers meet female flowers and pollination happens! Eventually, a fruit forms and when it's ripe, it opens and seeds float away to settle down and grow into new Tape seagrass plants. 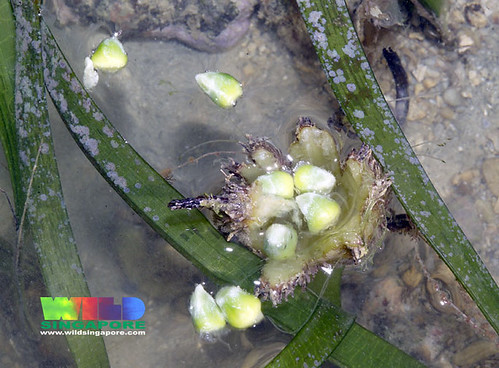 Why are seagrasses important?

Meadows of seagrass leaves create a miniature underwater forest. Small plants and animals thrive in these thickets. Seagrasses provide shelter for many animals that are not adapted for fast swimming (e.g., the seahorse and filefish). These include juveniles of larger fishes and animals that later move out into deeper waters and include commercially important fishes and sea creatures. Seagrass leaves also provide a place for animals to lay their eggs, and for small animals to settle down.
The Star Trackers have noted that the seagrass meadows on Cyrene Reef are important and possibly the only habitat left in Singapore where baby Knobbly sea stars (Protoreaster nodosus) can be found in large numbers. 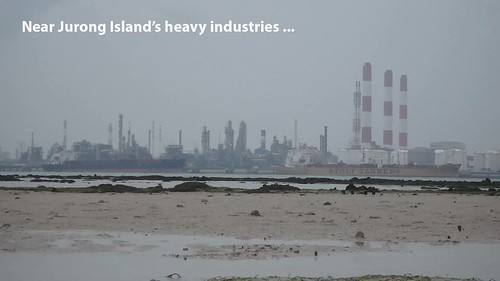 Since 2010, I noticed seagrasses disappearing from Cyrene Reef, Terumbu Semakau and Pulau Semakau. At the same time, seagrasses on Labrador and Sentosa seems to have been spared.

The biggest heartbreak was to see the vast lush seagrass meadows of Pulau Semakau vanish. Pulau Semakau good growths of 7 species of seagrasses. And lots of long Tape seagrasses, producing flowers, was a delightful encounter in the past.
In Oct 2014, first noticed the seagrasses disappearing on the northern side of Pulau Semakau. They kept getting more and more scarce and this is what I saw on our last trip in Aug 2016.
Once again, the Tape seagrasses were cropped short and the other species remain sparse or are heavily covered in ephiphytes.

The meadows are so lush at Pulau Semakau that when I initiated guided intertidal walks here, I insisted that we only cross at the shortest path through the seagrasses and that we stick to the same path for all walks. So that we minimise the 'death zone' created by people walking on the seagrass.
In 2016, the long Tape seagrasses have disappeared! We still use the same path, but it is no longer so visible as the surrounding seagrasses are so sparse!

Surprisingly, through out this 'die back' at Cyrene, Terumbu Semakau and Pulau Semakau, the Tape seagrasses at Labrador and Sentosa remain lush with long leaf blades. And they continued to flower.

Regular monitoring of our shores helps us keep track of such changes. This is why I continue to do our self-funded volunteer-led surveys every low spring tide. About 100 days a year, covering 40 sea shore locations.

You CAN make a difference for our seagrasses!

Join the volunteers of TeamSeagrass who have been monitoring Singapore's seagrasses since 2007! 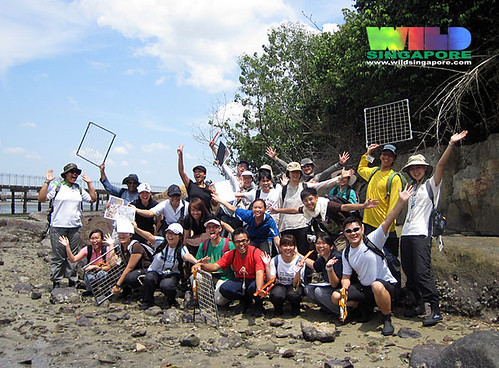 Data from TeamSeagrass and observations by TeamSeagrass volunteers have been vital to observing trends such as the disappearing seagrasses. TeamSeagrass gathers data to better understand and protect our meadows and the animals that depend on them. More details on the TeamSeagrass blog.