How are the corals at St John's Island?

Just minutes from the Central Business District, lies one of Singapore's last natural cliffs at St John's Island. The rocky cliff is cloaked in a natural coastal forest. And rocky shore beneath is dotted with corals and seagrasses.
A small team visit to check on coral bleaching and other threats. And ponder the future of St John's and our Southern Islands, as their fate is being handed over to the Singapore Land Authority (SLA).


A view of the natural rocky shore just off mainland Singapore, on a glorious sunny afternoon. 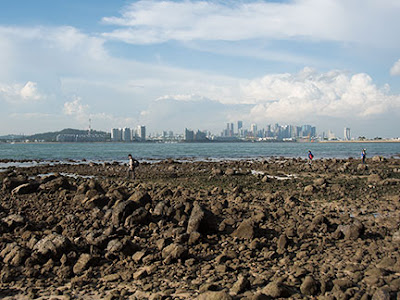 Our last survey of this shore was in July 2016 where I estimate about 80% of the hard corals and 50% of the leathery soft corals are bleaching, and 10-20% of the corals have died recently. More about the 2016 mass coral bleaching in Singapore.
St John's intertidal is not very reefy and always had few corals. Today I did see a few large corals, and none of them were bleaching. 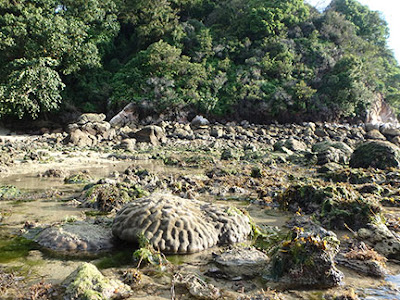 But some of the large coral colonies had dead patches. 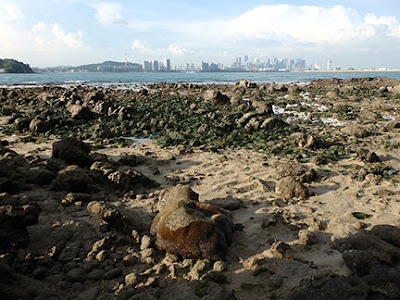 Pore corals are common on this shore. I did not see any that were bleaching. Most seemed alright although some had dead patches. 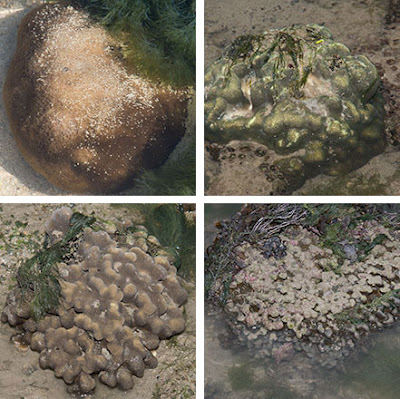 Also common on this shore were Merulind corals (previously Favid corals). Some colonies were totally healthy looking, others had dead patches. But none of those I saw were bleaching. 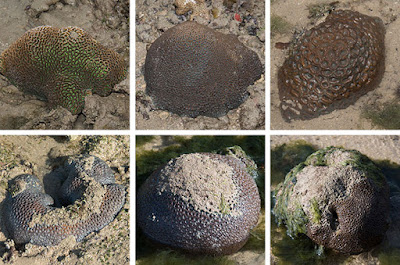 I saw a few Anemone coral colonies. Some seemed alright but a few had rather pale polyps. I saw one Small goniopora coral colony which seems alright although it had dead patches. There is a bloom of Sargassum over most of the reefy parts of the shore. So I couldn't take a closer look at the corals that I saw there in the past such as Disk corals. 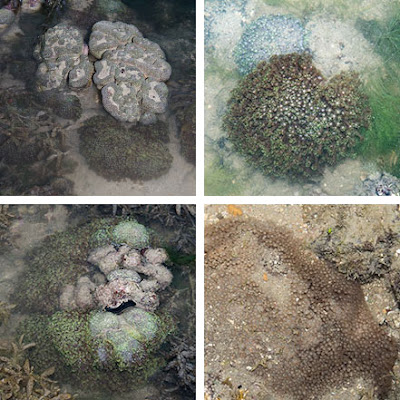 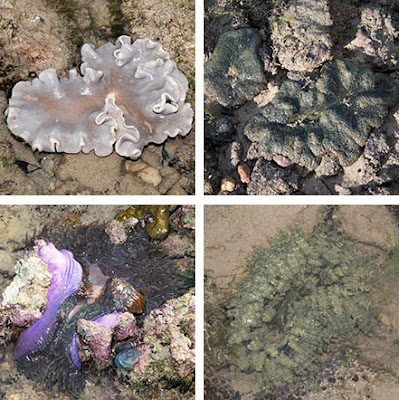 Seaweeds, and the seagrasses in the lagoon, were a great place to lay eggs. Cephalapod eggs on the left and nudibranch eggs on the right. A hopeful sign of life!

The northern tip of St John's Island has one of the last natural rocky cliffs in Singapore. Cloaked a natural coastal forest including many trees and plants now rarely seen in Singapore. 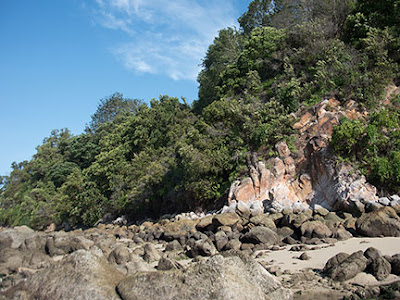 On the western shore of St John's grow some Nyireh laut trees. We only have a handful of these Critically Endangered trees, some here and one other growing at Sentosa. The big mother tree seems alright. And the two daughter trees nearby are also doing fine. 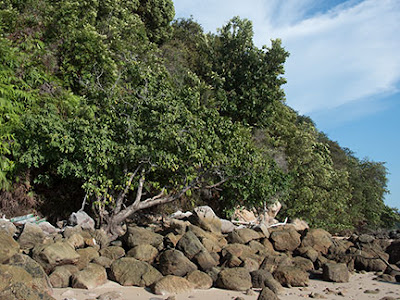 The coastal forest and forest of the Southern Islands are also home for birds. Such as the White-bellied sea eagles that were soaring in the sky during the trip. 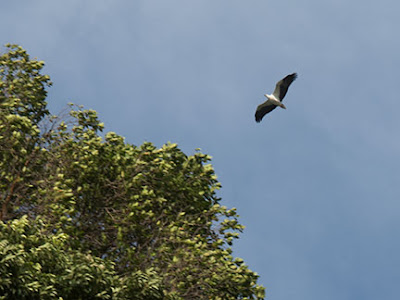 There are lush patches of seagrasses on the rocky shore. 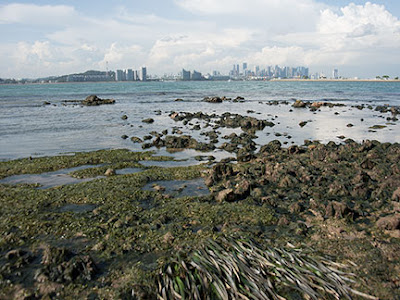 There were about 10 small clumps of Tape seagrasses with long leaf blades. All of them were flowering! Some had female flowers on long stalks (left) and some had short male flowers (right). 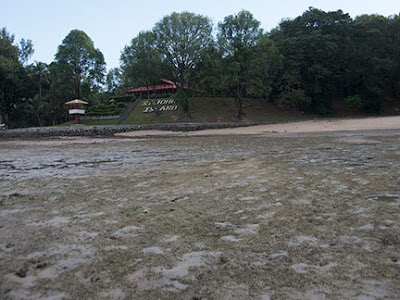 The seagrasses are dotted with Haddon's carpet anemones. I didn't see any anemone shrimps but I saw this spider crab happily crawling on top of one. It didn't seem to be trapped in the anemone. 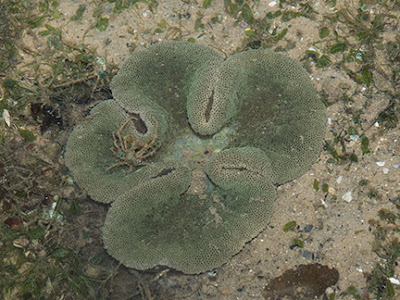 A few of the Haddon's carpet anemones were a little pale and 'bleachy'.

In the sandy lagoon, there were some Common sea stars. But I didn't see any other kind of sea star or sea cucumbers in the seagrass areas. There were lots of Long black sea cucumbers on the rocky shore. 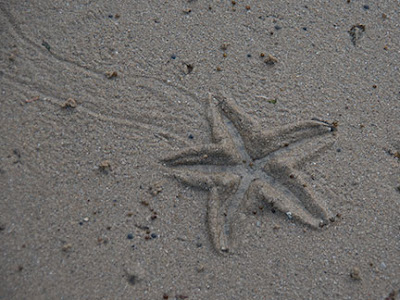 We did not see any fish nets or traps. The construction equipment that we saw in Jul 2016 was no longer there. It was nice to see that kids were having fun on the beach earlier in the day! 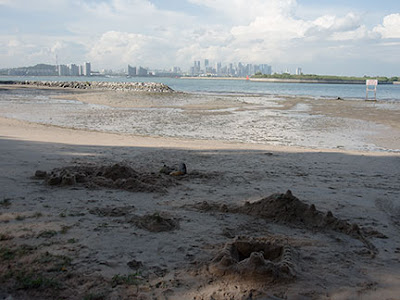 We enjoyed a lovely sunset at the end of the trip, but with a tinge of worry and regret at recently developments for St John's and the Southern Islands. 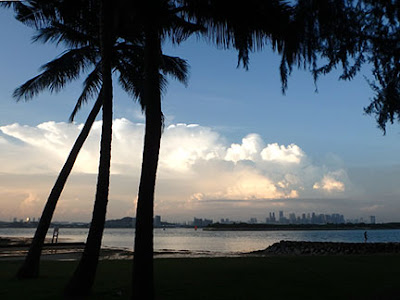 What is the future of St. John's Island?

Recently, it was reported that Sentosa Development Corporation would no longer manage St John's as well as some other Southern Islands. These islands would be returned to the Singapore Land Authority (SLA). SLA said "it would reveal plans for the Southern Islands, when ready."

Let's hope SLA considers it worthwhile to consult with the community of people who care about the Southern Islands. The Islands belong to all of us and many of us stand ready to help look after and protect the islands. From the people who care about the cats on St. John's Island, people who are concerned about heritage of the Southern Islands, people who love the marine life; divers, shore explorers, fishermen, to scientists who work in the area and fish farmers who make a living here.

In an era of public consultation, I do hope SLA will consider community engagement on their 'plans'.