A Very Large Crude Carrier collided with a container ship on 3 Aug 2016 "about 3 km South-East of Sebarok Island" according to the Maritime and Port Authority (MPA). 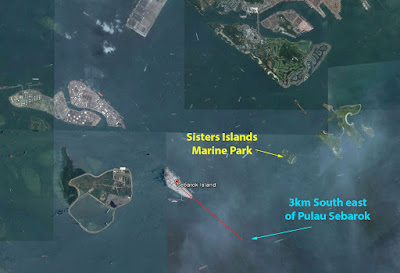 This location is quite close to the Sisters Islands Marine Park. Fortunately, no injuries or oil pollution was reported. The collision would have have broken a long safety record if the Very Large Crude Carrier (VLCC) spilled its full load of crude (320,000 dwt) assessed an expert in the tanker industry.

At about 2355 hrs on 3rd Aug 2016, Maritime and Port Authority of Singapore (MPA) was notified of a collision involving Dream II VLCC (Very Large Crude Carrier) and MSC Alexandra (Container Ship) in the Singapore Strait, about 3 km South-East of Sebarok Island. Both are Panama-flagged vessels.

Prior to the incident, MPA's Port Operations Control Centre provided traffic information and alerted the shipmasters of Dream II and MSC Alexandra of the risk of collision.

Dream II sustained damage to her bow whilst MSC Alexandra sustained damages on her port quarter hull. Both vessels are in stable condition and safely anchored in Singapore.

MSC Alexandra reported that 10 empty containers fell overboard during the incident, 4 onto the deck of Dream II and the rest into the water.

Upon notification, MPA immediately issued navigation broadcast to warn vessels of the presence of floating containers in the vicinity of the incident site. MPA has deployed survey and salvage teams to recover the containers.

There were no injuries or oil pollution reported.

Photos of the damage


Another photo of the damage to the container ship shared by Yujie Zheng on 9 Aug 16.


Why is now a very bad time for an oil spill?

Just last week, on 26 Jul, there was an oil spill reported off the Live Firing Islands.

Anytime is a bad time for an oil spill. But now is particularly bad because our shores are already suffering from heat stress from the recent unusually warm temperatures. In fact, since June 2016, the regular shore survey team have documented mass coral bleaching on many of our shores.

Oil spills on our Southern Islands

Our Southern Islands including the islands of our Marine Park lie close to the Singapore Strait, a major shipping lane connecting the Indian Ocean and the Pacific Ocean.
Large vessels from the Middle East, India to China, Japan and Korea ply this route.