There is a short stretch of rocky shore at Changi that is very reefy. This morning, it looks like the sponges and sea fans are coming back! I also saw a seahorse! 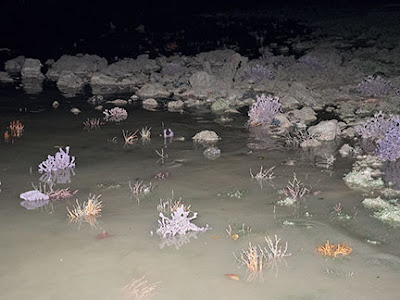 Sadly, this beautiful shore is impacted by fishing, the damage concentrated near the Changi boardwalk, especially where it goes over the water. The reefiest parts of the shore were furthest away from human reach. Read more about how coastal boardwalks can do more harm than good.


An Estuarine seahorse at Changi! We used to encounter them regularly in the past. I hope this means they have come back. My last encounter with a seahorse on this part of Changi was in Jun 2013. 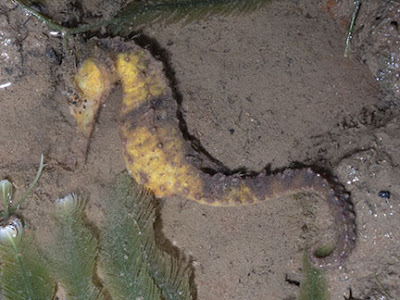 The sea fan garden is lush in areas far from human impact. Here's the area about 15m from the boardwalk where it juts out over the water. 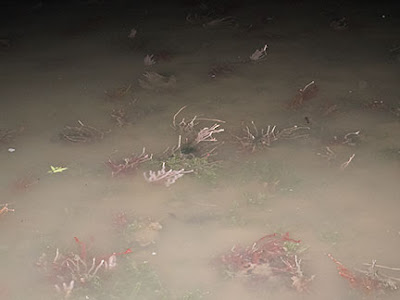 The sea fans are small but densely cover the rocky bottom. 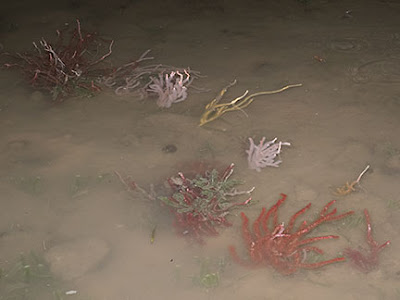 A look at the clusters of small sea fans closer to the shore. 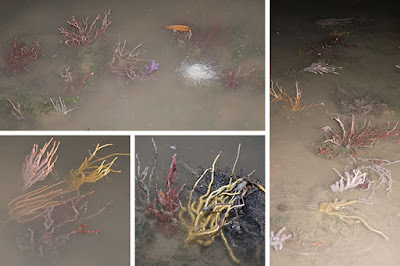 In deeper water, also far from human impact, there were dense groups of larger sea fans. 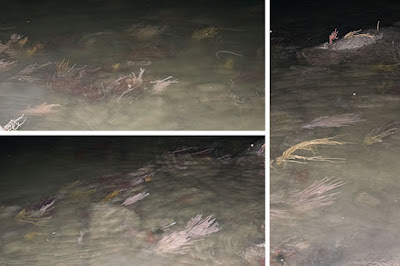 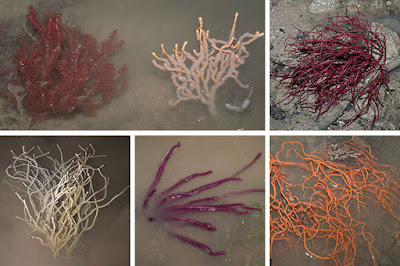 I saw a large Pink flowery soft coral and another smaller one. It seemed less pink than usual and a bit limp, but it was not bleaching. I couldn't find commensals in them. 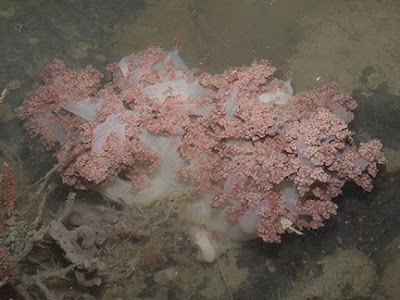 There were also some clumps of Candy hydroids, and a few patches of Button zoanthids. I saw a few cerianthids, several large colonies of Stinging hydroids, a few Flowery sea pens and some Sea pencils. 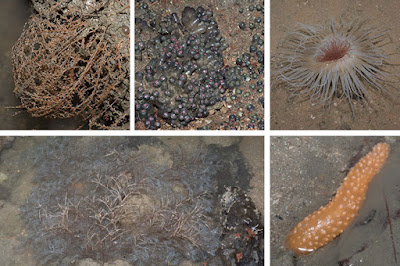 There were also many Zebra coral and some Neat hexa corals. They grow on artificial and natural hard surfaces everywhere. None of them were bleaching. I saw several different kinds of Swimming crabs. However, I didn't see any sea stars, sea cucumbers, feather stars or nudibranchs. But probably because I'm not so good at spotting things and not because they're not there. 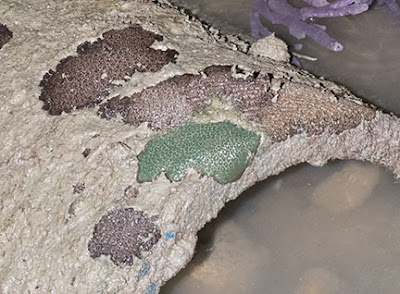 The most abundant sponges were Purple branchin sponges and Melted chocolate sponges. 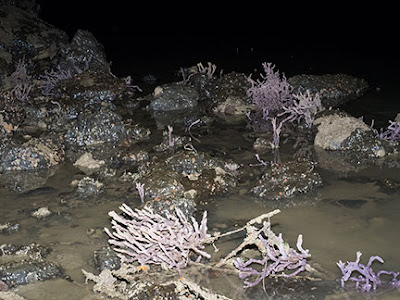 There were also a few clumps of other kinds of sponges. I feel the variety of sponges have not fully recovered. 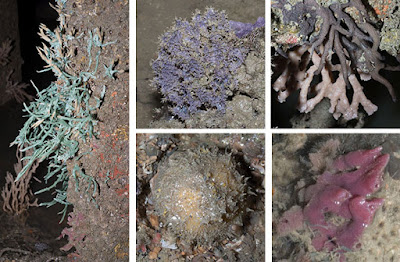 I also saw small patches of Hairy spoon seagrass. I last saw them here in Aug 2012 and Jun 2012. I didn't see any other kind of seagrasses. 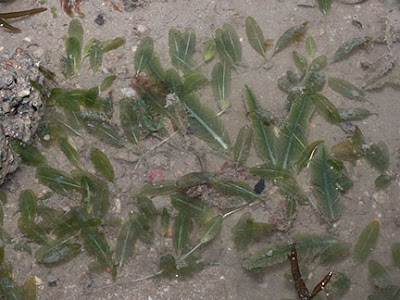 It is the season for the fearsome Sumatras: high velocity winds and rain from the West. This morning, we experienced the high winds which brought down branches and made trees bend alarmingly over us. Fortunately, this happened towards the end of the low tide window.
As we hurried back to shelter, under the boardwalk, we came across this abandoned fishing net. Throughout the survey, I saw fishing lines and fishing tackle entwined on sea fans and sponges, many of these doing poorly. 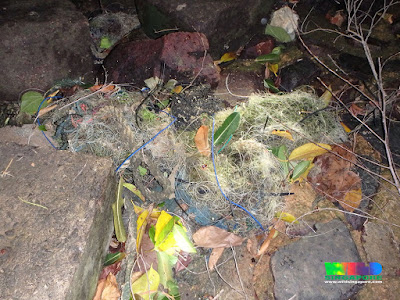 Earlier on, I also saw one fish trap, and remains of a few fish traps under the boardwalk. These would definitely damage delicate marine life such as sea fans and sponges. 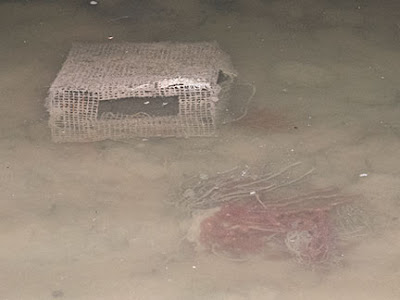 There were about 20 of these small bags filled with some soft substance. They were clustered all along the part of the boardwalk that juts out over the water. Are these bags used to weigh down nets or traps? And then just discarded when no longer needed. 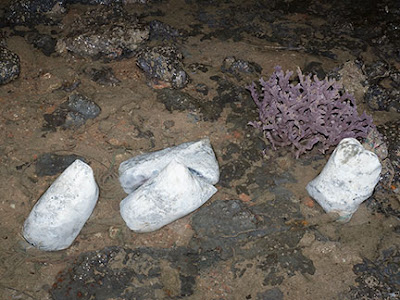 As we hurried back in the rain, along the part of the boardwalk that sticks out over the water, I saw what looks like a fishing net about to be laid from the boardwalk with a long pole. There were also about 20 fishing rods tied to the boardwalk railings and large styrofoam boxes ready for the catch. The tide was super low and it was a weekday. I thought this sort of intensive fishing only happened at high tide and on weekends. Sigh. 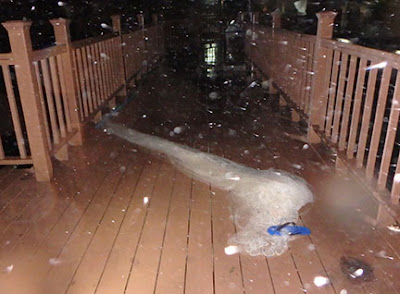 This is what I saw a few weeks ago on 10 Jul 2016. Segments of the boardwalk over the water completely taken over by fishermen who lay fishing rods, traps and lines in dense numbers. This is not very different from what I saw in 2009 in the same place. This also happens on other boardwalks. Here's some letters from the public about the conflict between fishermen and others on the boardwalks at Berlayar Creek, Changi and Punggol.
Read more about how coastal boardwalks can do more harm than good.
Posted by Ria Tan at 1:23 PM