Terumbu Bemban has among the best reefs in Singapore! Even though it is close to where many large ships are anchored. 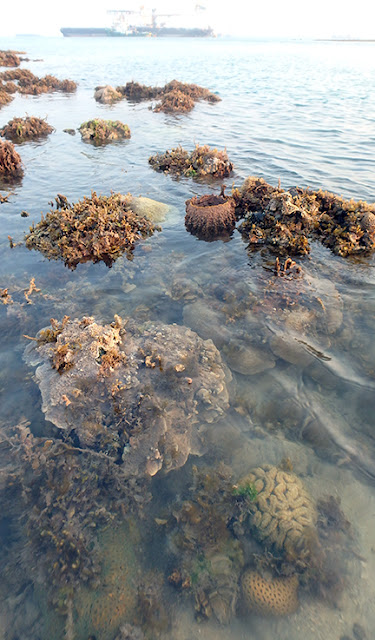 I checked out a new edge of this submerged reef. And Russel and Adriane saw lots of sharks (which are abundant near this reef).


Today, I decided to walk to another reef edge. And found a stretch thick with many different kinds of corals! 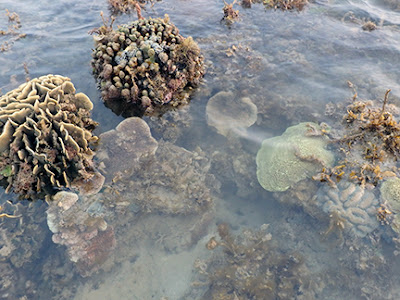 Here's a video clip of the edges of this submerged reef. 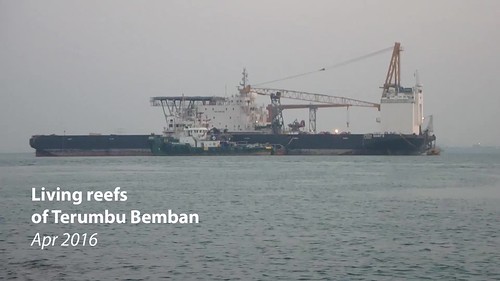 Hidden among the corals and Sargassum seaweed was a little Fluted giant clam! 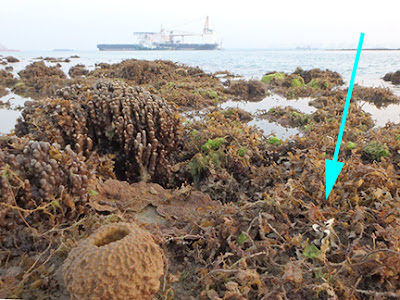 Here's a look at the little Fluted giant clam. It was about 6cm long. 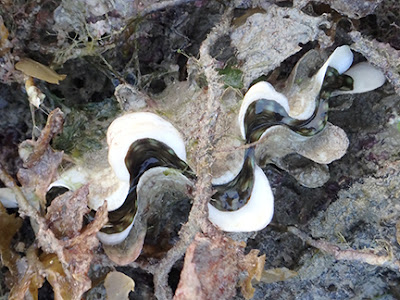 Later on, I saw this small Burrowing giant clam, about 10cm long. Chay Hoon and Adriane also found one each. 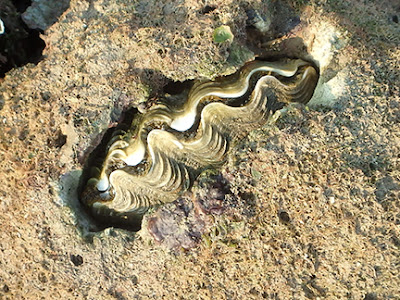 The Cushion star looks just like a rock or another coral. 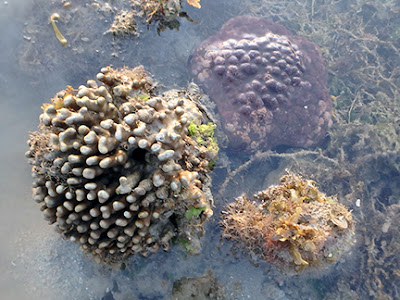 The sea star looks more obvious if you have a look at its underside.

As usual, on reefy spots, I encounter corals I've never seen before. Like this small Mycedium sp., which I call the Nose coral because the polyps on this thick plate-forming coral look like noses! Thanks to Chay Hoon for the ID.

Oh, this looks like a Sunflower mushroom coral. I haven't seen one for a very long time. 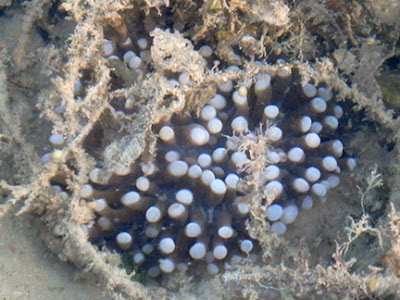 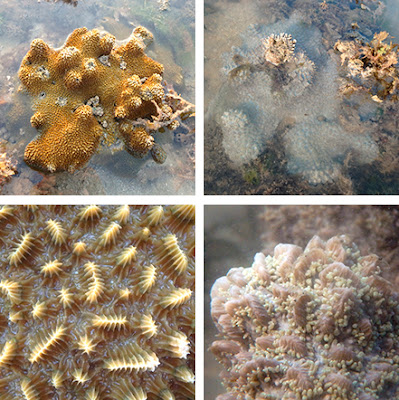 I think this is a plate forming Montipora coral. I seldom see this. 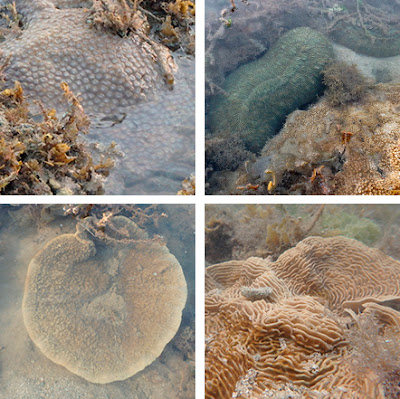 There were several Acropora corals, none of those I saw were bleaching. There were many Pebble corals, and only a few had whitish portions. 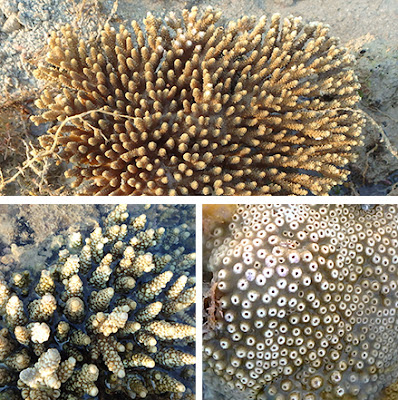 I saw many Brain corals and most appeared normal. The white one seems always white whenever I see it. 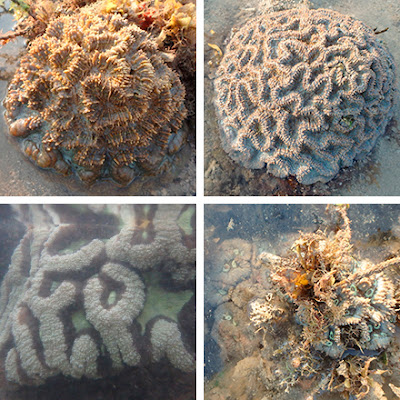 I saw many Disk corals and most of them were well formed and looking alright. Nice and brown! I actually didn't see many Merulinid (previously Favid) corals corals, probably because I kept to the reef edge. But most that I saw were not bleaching. 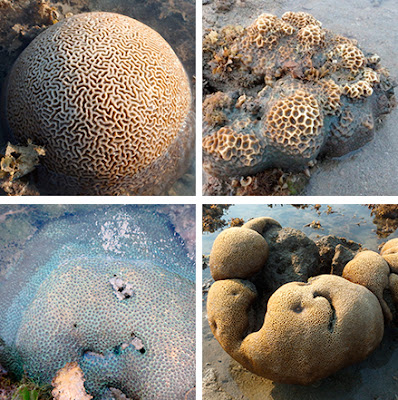 Common corals like Crinkled sandpaper corals, Anemone corals, Disk corals and Circular mushroom corals that I saw were not bleaching. In the past, these were among the first to bleach. 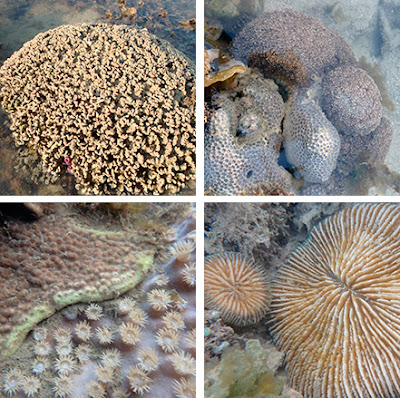 Some of the corals were pale but few were bleaching outright. 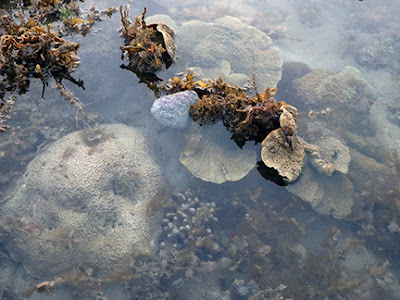 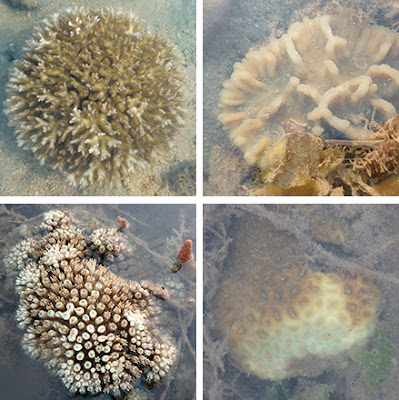 There were a few large Boulder pore corals and Merulinid (previously Favid) corals that were bright pink. Probably a sign of stress?

I did see one small bleaching Torch anchor coral and another that was very pale. Also a large Branching anchor coral with very pale polyps. 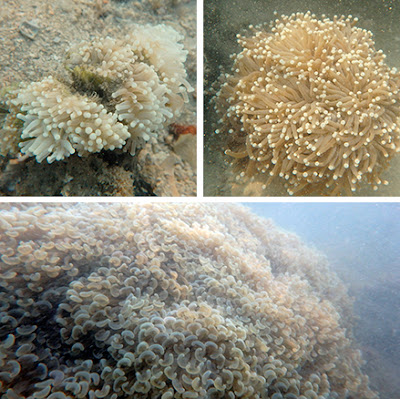 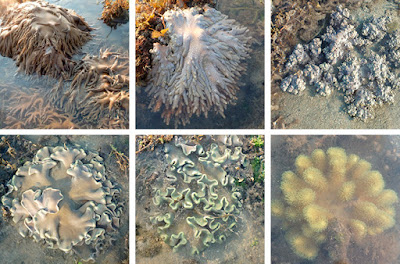 I only got to have a quick look at the rich reef near our landing point towards the end of our survey. 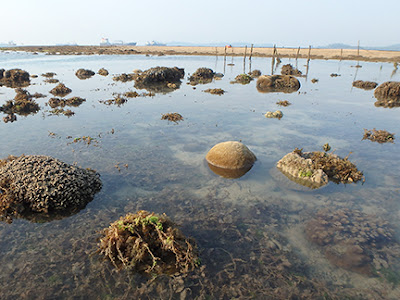 There are still many corals here. Although some were pale, I didn't see any that were bleaching outright. 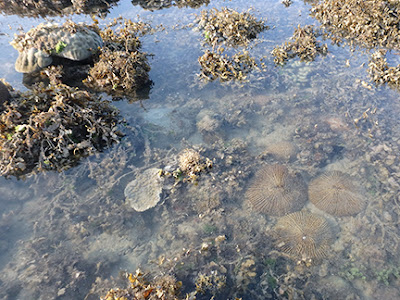 This is what the same spot looked like during the 2010 global mass coral bleaching.
At Marina at Keppel Bay, the corals growing on the pontoons were not bleaching. 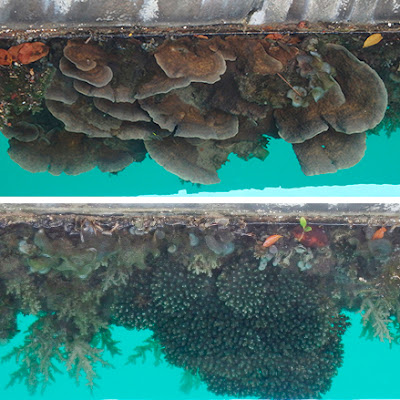 There were spinkles of Spoon seagrass, and twirls of rather short Tape seagrass as well as some Sickle seagrass here and there. Not very different from what I saw on our last survey here in Jun 2015.

Although the Sargassum seaweed bloom season appears to be dying out (finally!) there now seems to be a bloom of bright green Bee hoon seaweed. 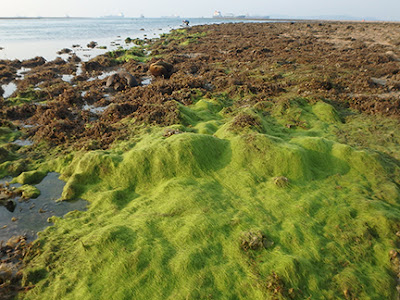 We land at first light! Thanks to Alex and James as usual for getting us there safely. (And back too). 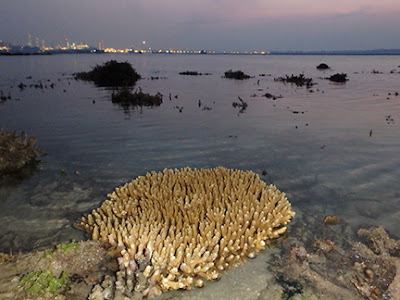 It is very tricky to land on the correct reef in low light, because we need to avoid the small submerged reefs around Terumbu Bemban, and also avoid landing on Beting Bemban Besar!

Let's hope this beautiful little reef stays safe until we get to survey again.

Others on this trip: Toh Chay Hoon, Lisa Lim.