Our last predawn trip for 2015 was spent surveying our favourite Changi shore. It lies in the flight path of roaring jetliners as they land at Changi Airport. 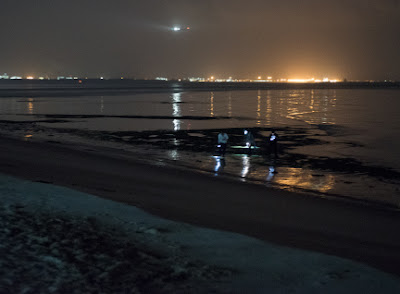 Like the Changi shore we surveyed yesterday, this one was also very quiet. But we did see Knobbly sea stars and a pair of otters!


The seagrasses were doing very well, covering almost all the intertidal with few sandy patches even on the sand bars. Mostly Needle seagrass with narrow leaf blades and Spoon seagrasses.  I only saw small patches of Fern seagrass. I didn't come across any dugong feeding trails today. Our last trip here was in Jul 2015 when I already noticed that this shore has changed and we no longer see many of the creatures that we saw in Jun 2013. 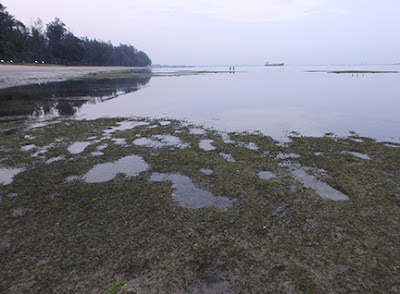 How nice to see several small to large Knobbly sea stars. It appears, we all separately saw different individuals. We saw Knobblies on our trip here in Jun 2015 and Jul 2015. Is Changi changing and now becoming sustainable for a Knobbly sea star population? But today, I saw only one Painted sand star and one tiny Biscuit sea star. I didn't see many brittlestars, although there is one on the arm of this Knobbly sea star. While we saw plenty of them in  Jul 2015, today I saw only one White sea urchin. 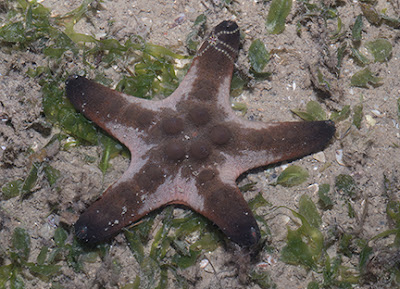 Among the abundant creatures on the shore remain clams like the oddly shaped Hammer oyster, Window-pane clams (some quite large), Big brown mactra clams and small young (shells were thin) Fan shell clams. I saw several Black-lipped conch snails but few live Gong gong. I didn't see any slugs today. I saw a few large Haddon's carpet anemones. They had lots of tiny anemone shrimps. I didn't see any cerianthids and I only saw a few sea pencils, There were many Orange striped hermit crabs, some of them were quite large. I don't quite know what these three were up to. 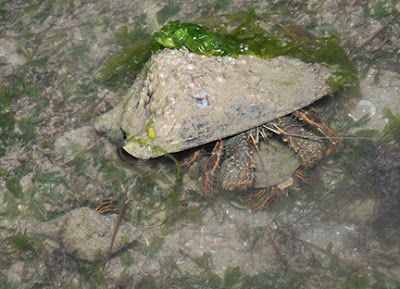 Among the animals that are still common were swimming crabs and sea cucumbers. The fluffy thing on the left corner is not algae, it is a fish! Here's a closer look at the Feathery filefish! 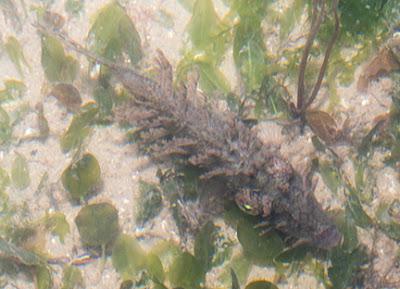 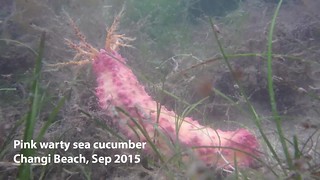 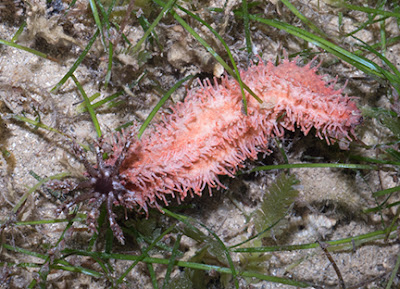 There were also a good variety of seaweeds including clusters of Mermaid's fan seaweed. Among them, I saw this Variable fang-blenny. As its name suggests, it can give a really nasty bite. 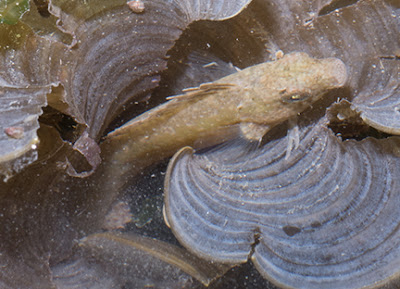 There was also many large patches of Mexican feathery green seaweed. Among them were tiny fishes like these gobies. 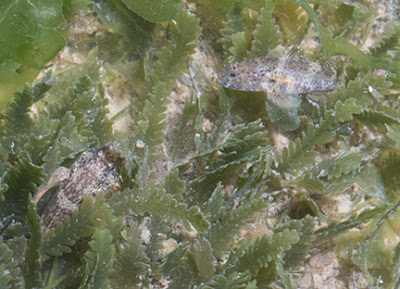 A tiny green filefish that looks just like a seagrass leaf blade. I didn't see any of the fluffy red seaweed/cyanobacteria that we saw yesterday at another part of Changi. 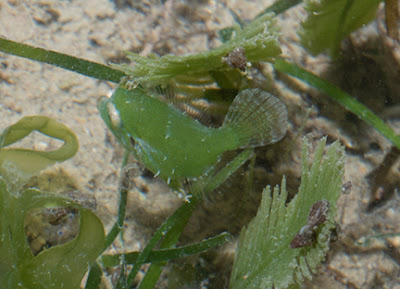 I came across a cluster of these Mitre snails that we first started to see here only in 2012. At first I thought the snails were eating something. 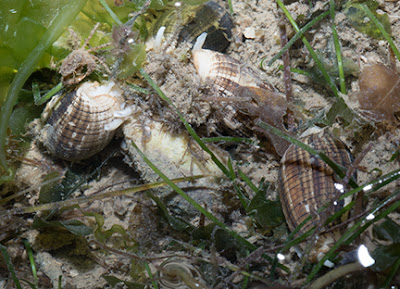 So I gently took a closer look, and it turned out that there was no freshly dead animal under the pile of snails. Only one snail stuck to a long dead clam shell with clusters of what appears to be egg capsules. 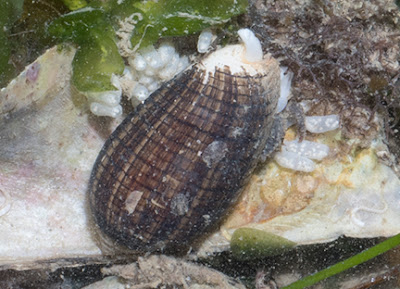 Later on, I came across a Window-pane shell completely covered in these capsules with the Mitre snails nearby. The snail on top of the capsules is occupied by a small  hermit crab. 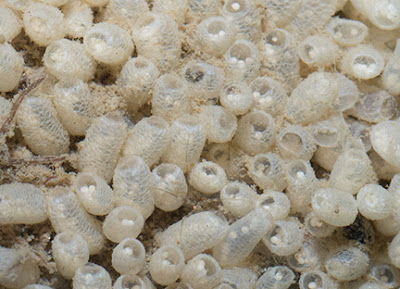 At the end of our trip, Becky Lee spotted a pair of otters! (Tiny bouncing dots in feeble camera zoom) I saw some paw prints on the sand: do they belong to the otters? 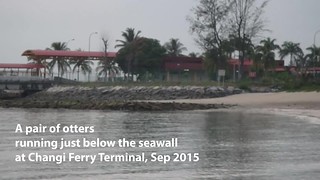 We can only visit this shore at good low tides which happen mostly in the morning. This means we probably can't check up on this shore until next year. I do hope by the time I revisit, these shores will have recovered.