11 Jul (Sat): FREE screening of "Birth of a Marine Park" by Victor Tang for Discovery Channel 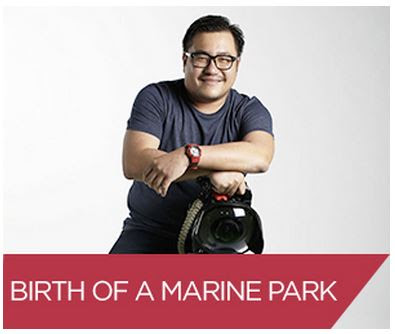 Thank you Victor for sharing with Singapore and the world about our amazing marine life. And the awesome story of how Singapore's first Marine Park came to be. Don't miss this special screening to meet Victor and some of the people who were part of this story.

Episode Guide:
1) Man Vs. Birds
2) Growing Roots
3) Heartland
4) Wild Cards
5) Birth of a Marine Park (Come at 9pm to avoid disappointment!)
(Thanks to Mei Lin and Victor for the details)

What To Expect:
- Smiles, laughter & good cheer!
- Play old school games with a twist, like life sized pick-up-sticks & giant Jenga
- Rub shoulders with the inspiring characters in the stories and the filmmakers
- Opportunities to win amazing Discovery Channel goodies
- Food and drinks are sold at the venue

What To Bring:
- Groundsheets, picnic mats, deckchairs...for you to lepak on and watch the films
- Food and snacks
- Umbrellas, ponchos...it’s an outdoor, rain or shine event

Can't come for the public screening? Catch it on 13 Aug for the actual telecast on Discovery Channel.

More about Singapore Stories from the Discovery Channel page:


"Directed by Singaporean documentary talent, five films capture the zeitgeist of an emerging Singapore. From a daily battle with birds on Orchard Road, urban farming, and the art of card flourishing; to a celebration of one of Singapore’s oldest housing estates and the creation of the island nation’s first-ever marine park, these topics – told from the filmmakers’ unique perspectives – showcase the new directions that are setting the themes for a brand new Singapore, confident of its next stage as a nation that has just entered its 50th year of independence. These documentaries are part of Discovery Channel's on-going First Time Filmmakers initiative, which is targeted at up-and-coming directors."


More about Victor from the Discovery Channel Singapore Stories page:

Victor wears many hats – from freelance producer/director to underwater photographer/ videographer to musician. As a musician, standing before his audience night after night, one of the challenges for Victor was to detected nuances in their body language as to what genre of music they prefer. Before long, this translated into a knack for teasing out the reasons behind the expressions, the motivations behind the actions, which led to a desire to share these stories.

This is Victor’s first foray into filmmaking. He took part in the FTFM initiative because he had a burning desire to tell his story. He felt that – apart from the initiative’s long and illustrious history and success – it has become an avenue whereby anybody with a good story to tell can have his or her vision realised on screen.

Unknown to many, Singapore’s waters are home to countless wonderful marine creatures that Singaporeans would gladly pay thousands of dollars and fly thousands of miles out of the country to encounter. The fact that a marine park can be set up in such busy and (seemingly) lifeless waters can only mean there is something special down below, and Victor counts it as his greatest privilege to be allowed to reveal it. From his journey, he has developed a profound respect for people who make wildlife films – braving the elements, seasickness and soggy muesli bars, to bring home the money shots.

Victor spent a lot of time and a great deal of care and effort in crafting this film. Not just the hard work of filming, but the even harder work of connecting with the marine community who work for Singapore's shores. I'm so glad he focused on the people who made Singapore's first Marine Park possible.

Victor has been joining the intertidal survey team for some months. Here's my photo of Victor (back to us) in Nov 214, shooting the other half of the team on the dinghy as they landed on  Beting Bemban Besar, a submerged reef. 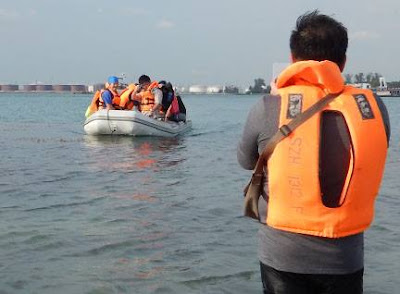 While Marcus Ng as on the dinghy taking a photo of us! We can be such tourists. 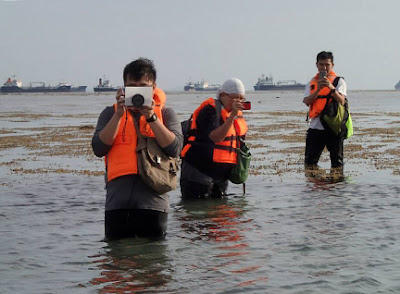 Victor is still joining the intertidal team after the film. He shared this photo of himself and the team during our Labrador survey yesterday! 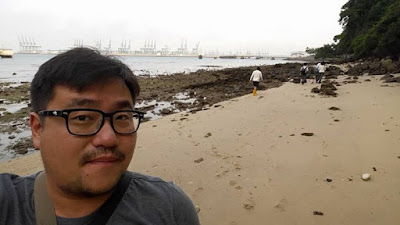 Thank you Victor! And looking forward to more films about Singapore's amazing shores!

We had a great time at the screening! Mei Lin, who was featured in the film, shares more about her Giant clam work. While some marine guides set up a mat with games and marine guidesheets as prizes. We  had to weigh down the guidesheets with bananas to stop them from flying away in the breeze.

More photos of the event in this facebook album. 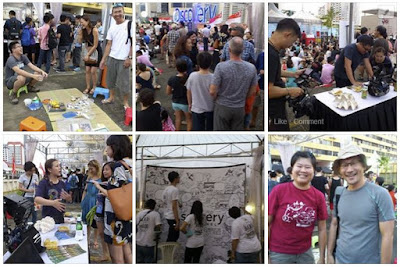