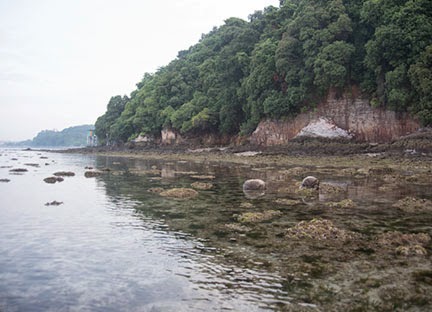 Today, I had a quick look to check for coral bleaching and see how the seagrasses are doing.


The Tanjung Rimau Beacon (green thing with the conical 'hat') lies just opposite Labrador Park (orange beacon). The water here is usually very clear, and quite calm at low tide despite the heavy boat traffic because of the reef edge. 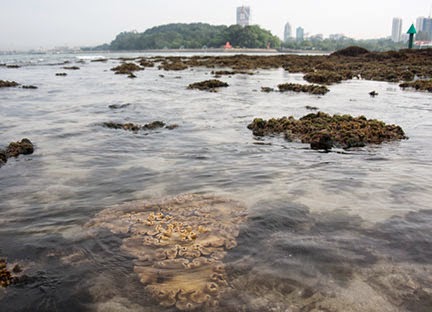 There were about 10 large hard corals (about 50cm diameter) on the intertidal reef flat. All of those I saw were Favid corals 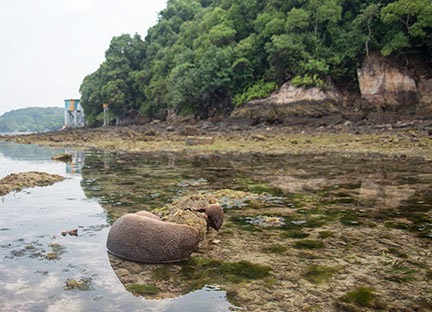 It has been very hot lately, which makes us worry about coral bleaching. Here's the latest Bleaching Alert Areas from the NOAA website. Singapore falls in the 'Watch' status.What is coral bleachingand why this is of concern on the Bleach Watch Singapore blog.

Most of the Favid corals were alright. Only a few very small colonies were pale. 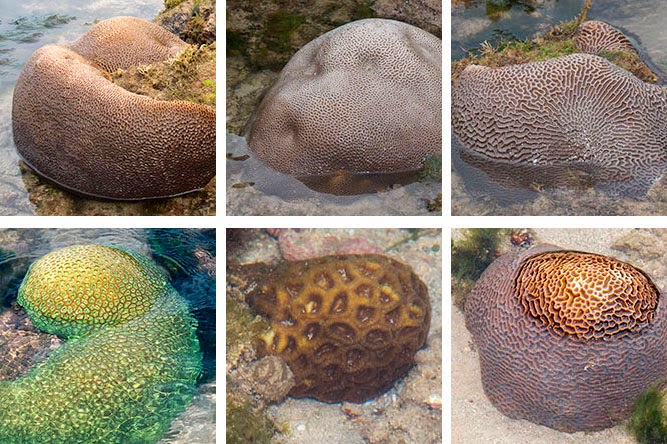 There are many small to medium-sized boulder-shaped Pore corals. Most of them are nice and brown, a few are light brown and some had pink patches, a sign of stress.

There were many small colonies of Goniopora coral. Most were alright. Only a few small ones had bleaching patches.

I saw a few Crinkled sandpaper corals and they were all alright. There were some small Disk corals, all of them were very pale. I also saw one plate Montipora coral and one Galaxy coral. The corals on this shore suffered badly during the mass coral bleaching event in 2010. So I was glad to see no bleaching corals today. 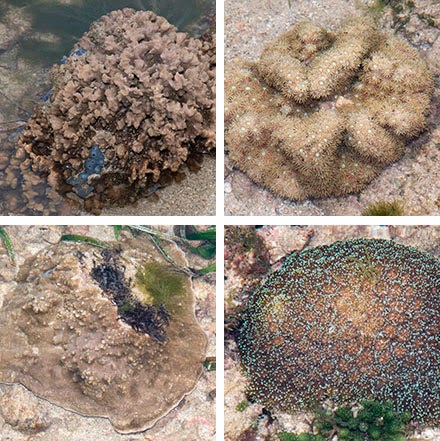 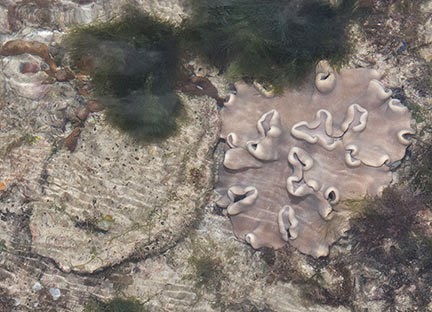 I saw several other kinds of leathery soft corals and all of them looked alright.

It's hard to spot animals during a daylight survey as they are often well hidden. Like these crabs: the one red eye of the Ferocious reef crab and Red egg crab. There were a few Hairy crabs too. I also saw one Black long sea cucumber. We usually see a lot more creatures during a night trip like the one we did in Sep 2014.

I saw several Marine spiders scuttling about on the shore. These are true spiders that live on the seashores. They forage at low tide and shelters in an air bubble in the coral rubble when the reef is submerged. They can also 'walk' on water! 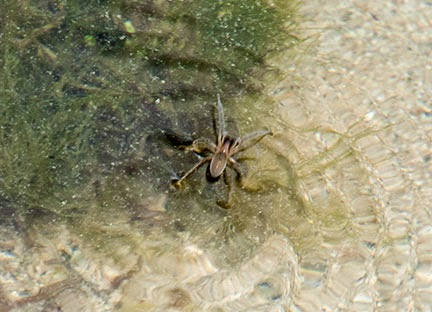 There were many Frilly sea anemones. I didn't see any other kind of sea anemone today. 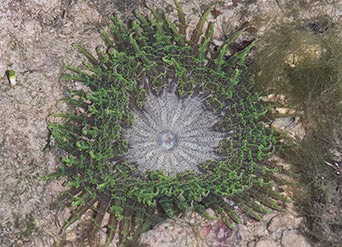 There were many schools of tiny fishes swimming among the seagrasses and seaweeds. 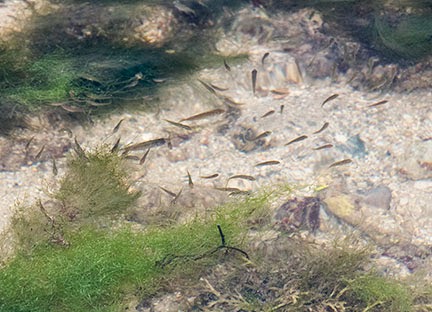 Some parts of the rocky shores had lots of colourful sponges of various kinds. 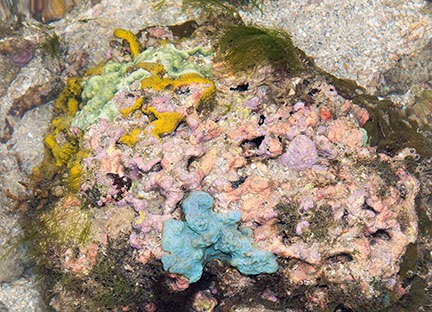 There are still lots of Tape seagrasses with nice long (more than 1m) leaf blades. 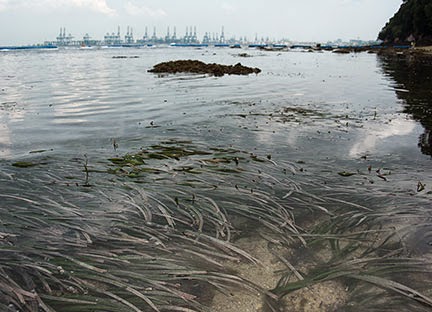 I saw a few clumps of Tape seagrass with female flowers and developing fruits. 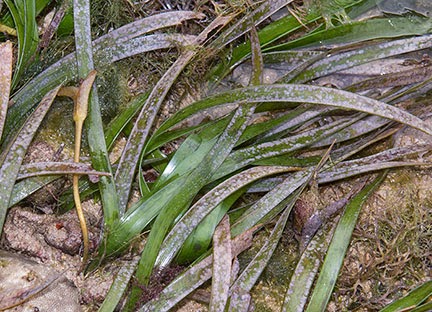 There is also a nice patch of healthy Sickle seagrass which I last saw in Sep 2014.

Most of the Spoon seagrasses I saw were lush and green. But I did see a few patches with burnt leaf blades and transparent leaf blades where the green stuff has disappeared. I noticed this too in Jun 2013. 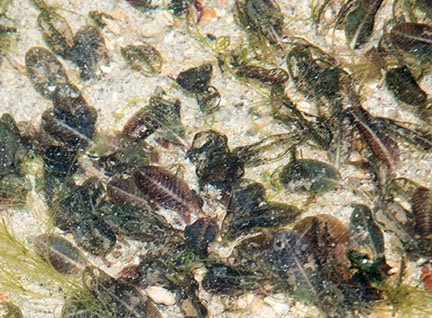 Every time I visit this shore, it seems to have a bloom of Hairy green seaweed. 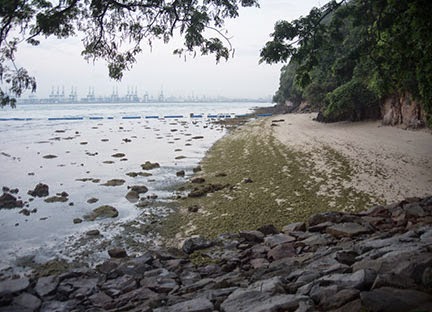 Today, there were other kinds of seaweeds washed up together with the Hairy green seaweed. 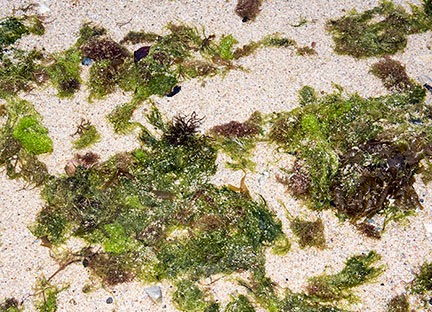 There are two rare trees on this shore. The Nyireh (Xylocarpus rumphii) mother tree and the young one next to her were doing fine. I didn't see any flowers or fruits but they both had nice green leaves. I forgot to check for the other sapling that I saw in Apr 2014. 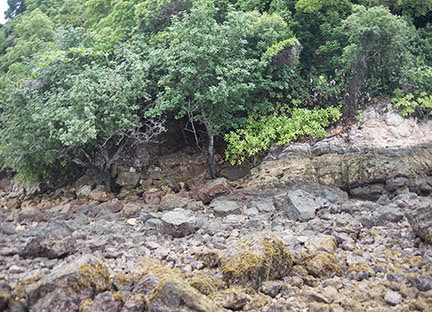 There is a lovely drape of Raffles pitcher plants near the trees. They were blooming and fruiting furiously. 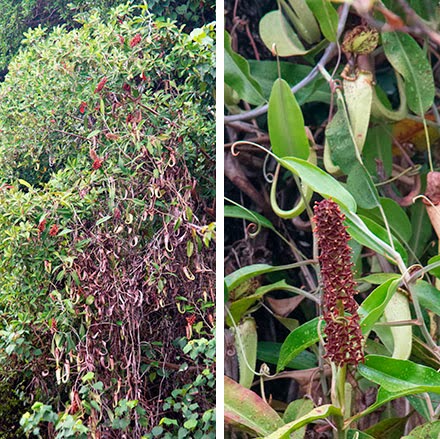 The shore has a line of blue drums which are part of a floating 'security barrier' installed in 2012. They blue drums seem be to clumping together. The chain that attaches them to the shore continues to batter the rocks. Near the drums are living seagrasses and small coral colonies. I didn't go far out to check all the drums, but those I saw were intact and not broken. Heng Pei Yan saw broken drums when she last checked in Aug 2013. These drums 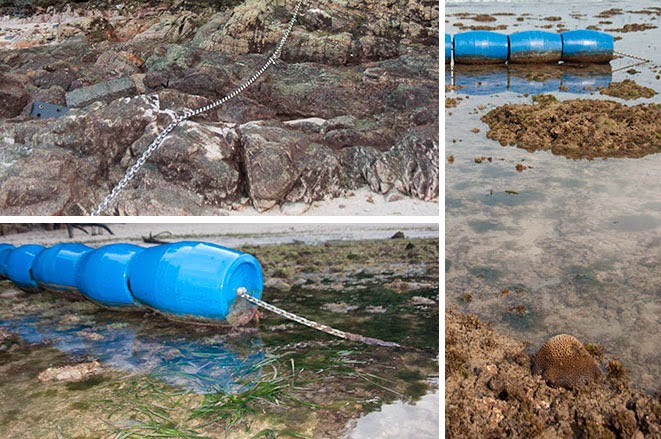 The line of blue drums appear to end abruptly at the first artificial lagoon. There's also a camera pointing out to sea. 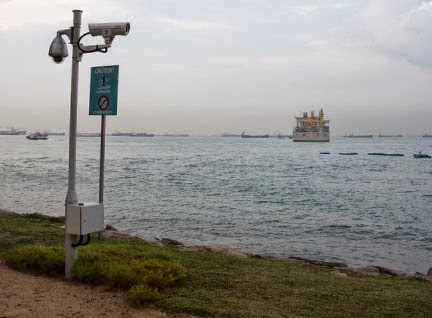 Here's a photo with all the pressures on this Sentosa shore in one picture. The blue drums, large ships parked nearby, a large ferry zooming by, and the petrochemical plants on Pulau Bukom producing a large cloud of emissions. 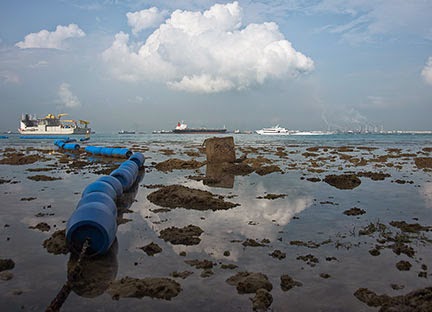 This shore is also close to Pasir Panjang Container Terminal. When I arrived I saw a large group of kayakers bravely going past the line of blue drums. You can see in the photo the waves that they had to negotiate. My hat off to them! 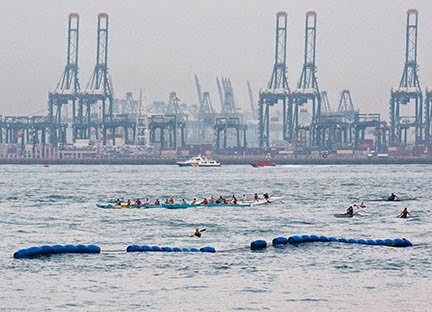