Dead fish update: a dead monitor lizard among the fishes

This morning, Victor Tang saw a dead monitor lizard among the dead fishes washing up at Pasir Ris Park. This is worrying. It is becoming increasingly obvious that this recent mass fish death is among the worst to happen in Singapore.

There doesn't seem to be 'new' dead fishes though.  But even if dead fishes stop floating up in large numbers, the danger to the ecosystem may not be over.


Other updates from Pasir Ris this morning include these photos by Youna Lyons: "Mostly decaying fish this morning except for all sizes of worms, small gobies and eels in comparatively large number. Yesterday's intertidal at low tide seemed very quiet and bare except for some busy small crabs."
I did a quick survey of the northern most shores near the Causeway this morning. 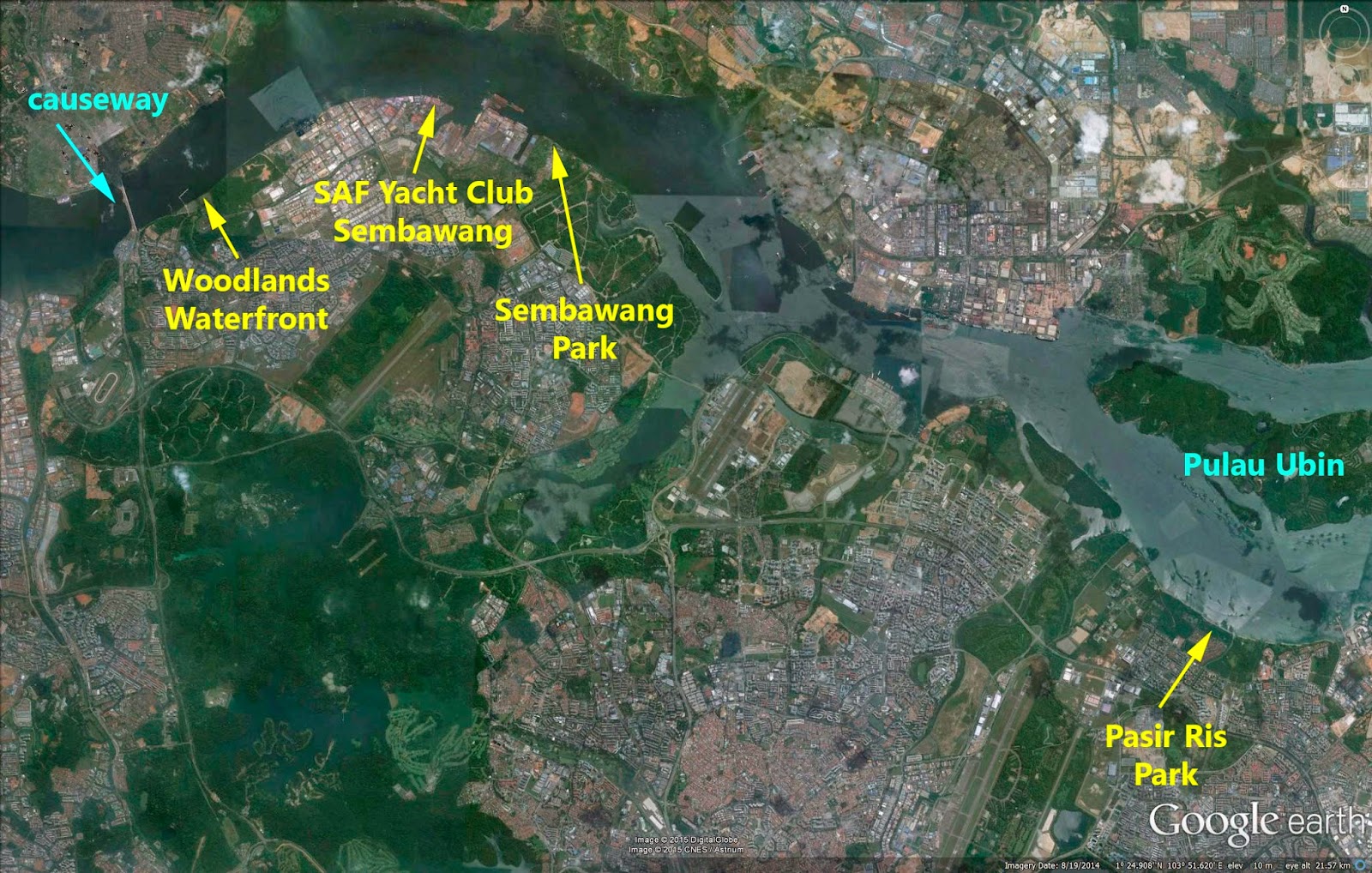 At Woodlands Waterfront Park right next to the Causeway, the water was clear and clean with very little floating rubbish. I didn't see any dead fishes. 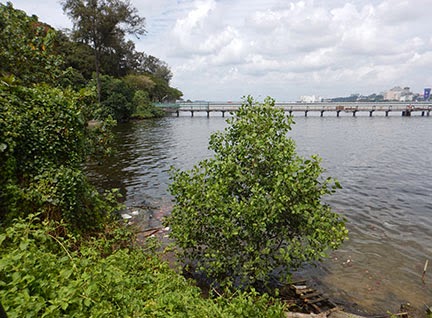 A closer look at some of the floating rubbish. 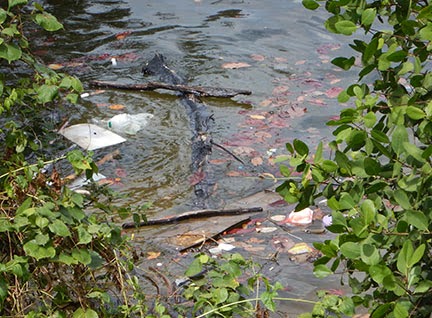 The water is so clear I can see the sandy bottom! 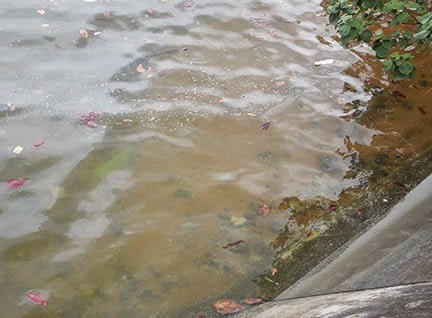 I stopped by at the SAF Yacht Club Sembawang. There was more rubbish washed up on the shore here. 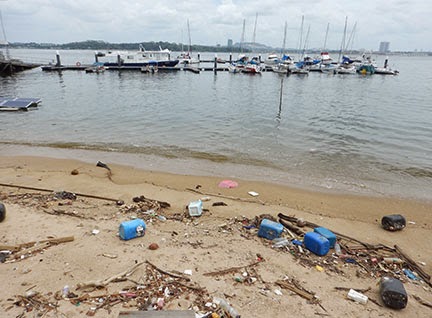 I saw one large dead catfish. 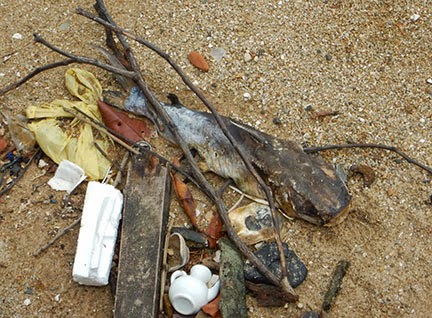 The pile of rubbish is astonishing. But no dead fishes among them. 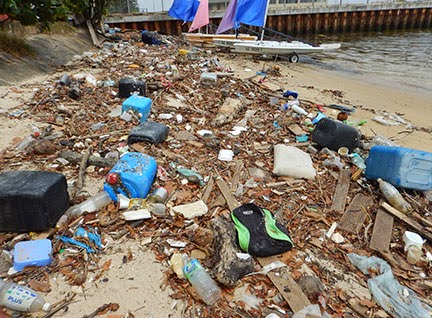 I made a quick stop at Sembawang Park where people are enjoying the shore even though it is next to some major shipyards! 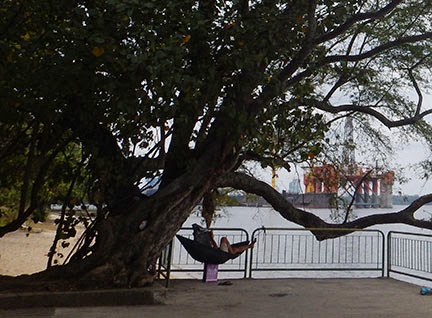 There was very little rubbish on the tideline. 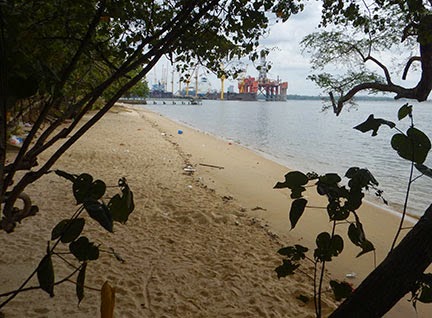 I only saw one large dead catfish. 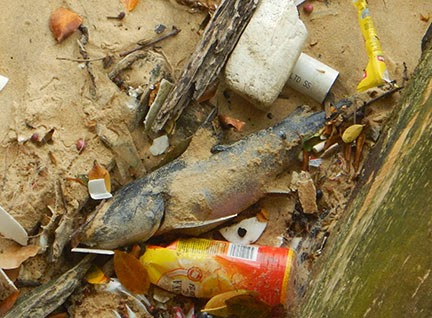 [Update 4 Mar: A contributor who wishes to remain anonymous shared: 2 Mar, 5.51pm sembawang beach, 200 metre stretch of beach only spotted these 4 carcasses. Heavily decomposed fish was at far left end on side of jetty so it could be from earlier die off. The other three fish look pretty fresh. Also checked out Yishun Dam at around 620pm yesterday. Nothing."] 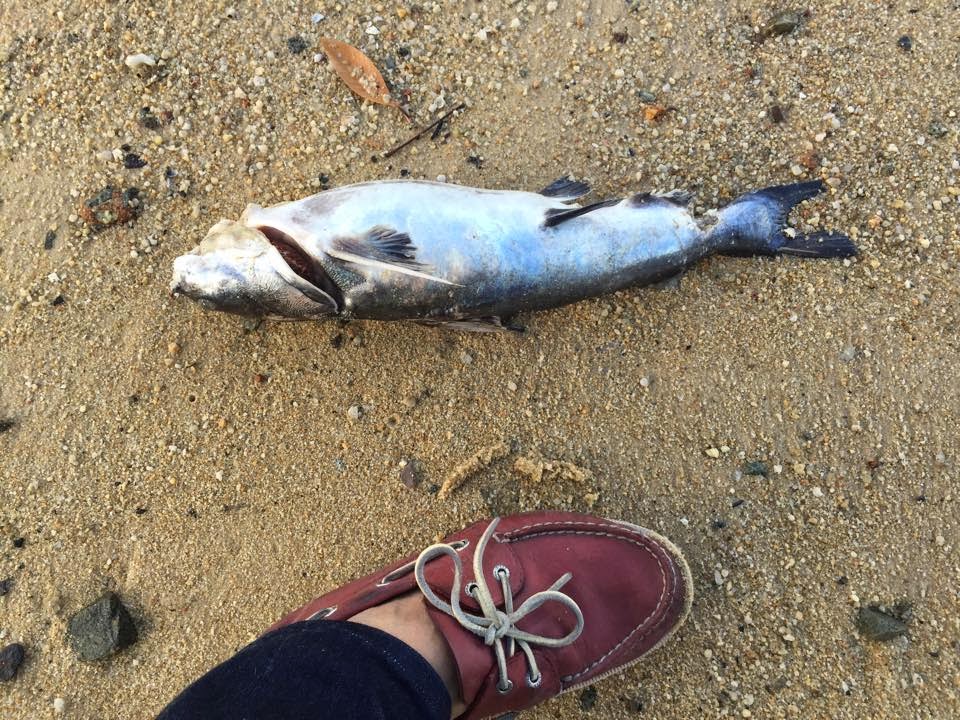 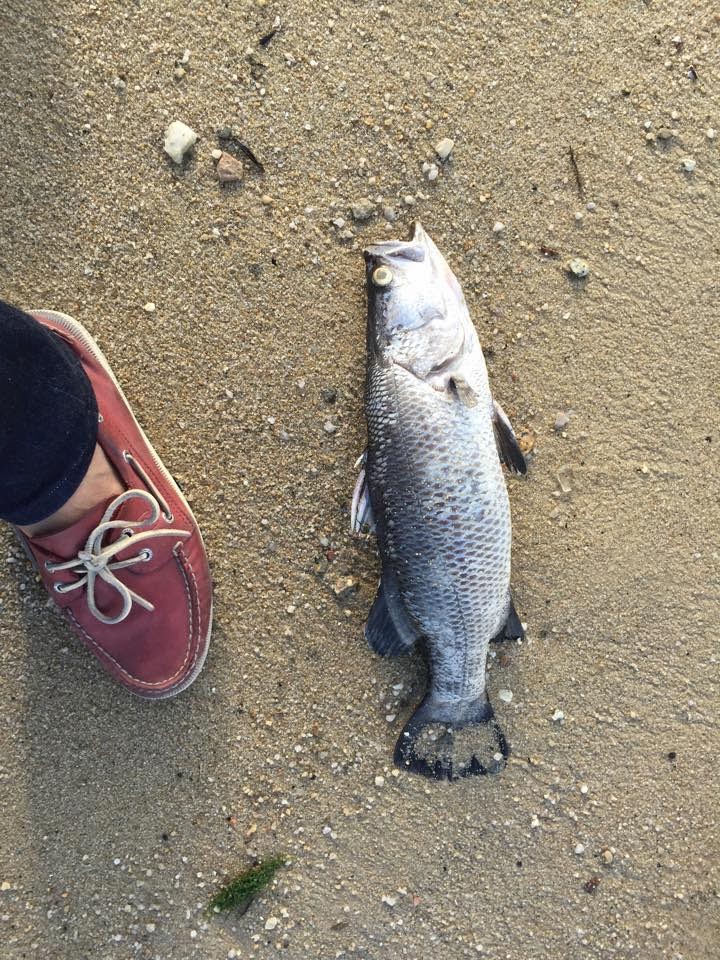 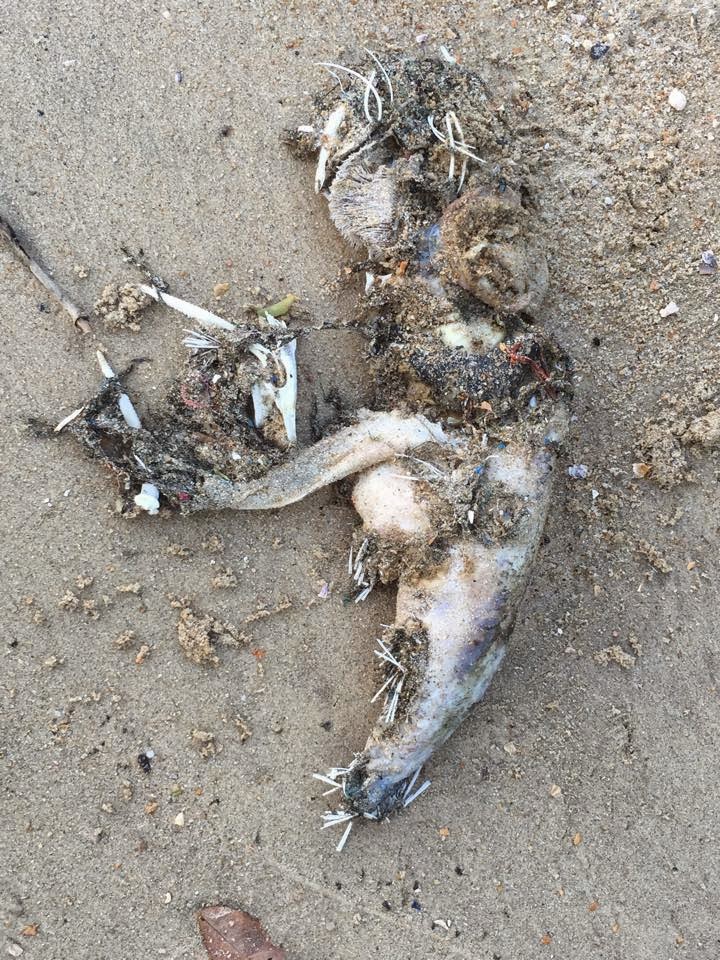 Yesterday (2 Mar), Sea Shepherd Singapore did a survey of the dead fishes and commented on their facebook post: "Sea Shepherd Singapore assisted Wildlife Watcher - Singapore to collect tissue samples for lab testing, as well as to photograph and hopefully identify some of our unknown marine life. We spent 1 hour at Changi beach (from Changi Jetty to Changi Sailing Club) and 1 hour at Pasir Ris beach (from Sungei Api-api to Sungei Tampines).

"Most affected fish species are the toadfishes, with an estimated count of 100+ carcasses, followed by eels and groupers. It will take awhile for the test results, hopefully it will shed some light on the cause of what seems to be the worst Harmful Algae Bloom (HAB) in recent years."
[Update 4 Mar: Lim Yaohui shared these photos of "dead fish and marine life along the shoreline of Pasir Ris beach on Mar 02 2015 and Mar 03 2015.] 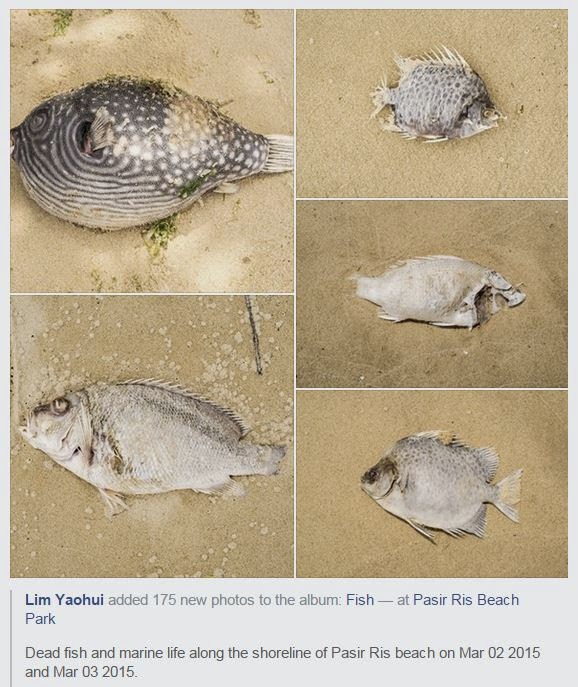 In mainstream media reports on the mass fish deaths so far, AVA has not revealed the total loss of fish farms in tonnes. There have only been anecdotes from fish farmers who said the fish deaths were worse than those during a similar event that happened at around the same time last year, with many interviewed saying they lost practically all their stock.

Comments from a cleaner on the beach suggest the huge magnitude of the mass death event: Mr Shafiq Daniel Lau, one of the cleaners at the beach park: Although the mass mortality of fish in Singapore is nothing new to him, the number of dead fish this year has made him worried. "I'm very concerned. This year is very bad. In the last two years, I was working here but there weren't as many dead fish. This year, there are many," he said.

It is good to know that marine biologists are investigating: "Dr Lena Chan, director of the National Parks Board’s (NParks) National Biodiversity Centre, said NParks is concerned about the potential impact of this incident on marine biodiversity here. “We are consulting with other agencies and will carry out further investigations if necessary,” she said."

Responses to the mass fish deaths

Throughout the mass fish deaths, many people have raised great questions and suggestions to my posts on facebook. Once I recover from the surveys, I'll try to sit down and consolidate them.

Meanwhile, Adventure Paddlers remind us to appreciate and to act, for the ecosystems that support life in Pasir Ris and Pulau Ubin.
What's next?

It is becoming increasingly obvious that this recent mass fish death is among the worst to happen in Singapore.

Even if dead fishes stop floating up in large numbers, the danger to the ecosystem may not be over.

We will continue to survey for other impacts over the next few day.

More info about why it is important to find out what is killing these fishes, and lots more links, in this previous post.
Posted by Ria Tan at 7:08 PM