Dead fishes are washing up on Changi Beach, large and small, wild and farmed. We also checked a small stretch of Pulau Ubin and include in this post, updates shared by others on the situation at Pasir Ris and Punggol. 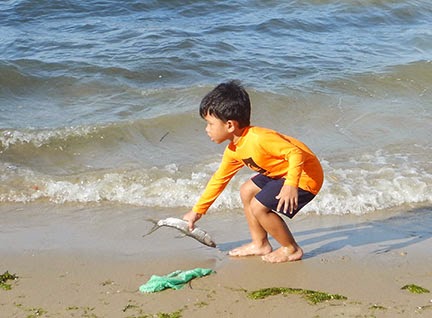 What is causing the mass deaths? According to a facebook post, OnHand Agrarian says: "the good folks at DHI labs gave a probable answer: Gymnodinium breve". And one of the fish farms has issued a public SOS appeal for crowdfunding among its customers.


What is causing the mass deaths?

According to a facebook post, OnHand Agrarian said: "the good folks at DHI labs gave a probable answer: Gymnodinium breve."

According to Identifying Harmful Marine Dinoflagellates: Gymnodinium breve (Davis, 1948) on the Department of Botany, National Museum of Natural History, Smithsonian:


Toxicity: Gymnodinium breve is a known toxic species that produces a series of brevetoxins (neurotoxins)(Baden 1983). These toxins are responsible for massive fill kills along the west coast of Florida in the Gulf of Mexico. Aerosolization of the toxins (noxious air-borne G. breve fragments from sea spray) has been linked to asthma-like symptoms in humans (Baden et al. 1982). Brevetoxins produce neurotoxic shellfish poisoning (NSP) when consumed (Hughes 1979). These toxins are known to cause human illness and distress; however, the poison is not fatal: no human fatalities have been reported from consumption of G. breve-infected bivalves (Steidinger & Joyce 1973).

It was a lovely Sunday evening and Changi beach was crowded with beachgoers. Families were swimming in the water. There were many people parachute surfing too. 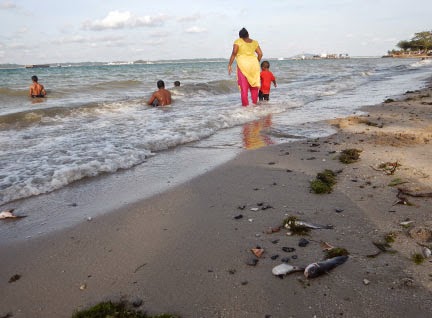 Kids were playing in the sand. 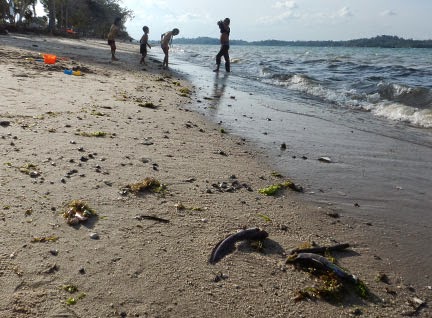 There were many people fishing with lines and some with a cast net. 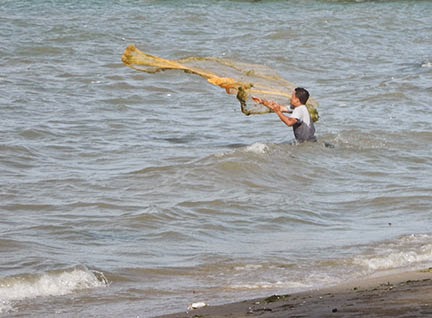 Near the washing up point, this gentleman was diligently collecting the meat of oysters probably harvested off the shore. 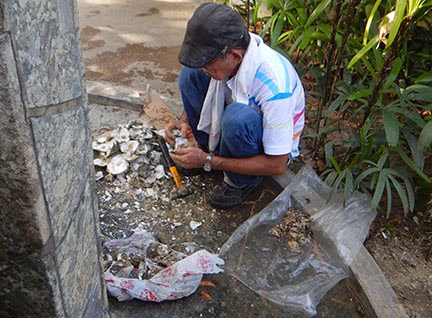 I checked out a stretch of shore near Carpark 7 that lies outside the Changi Beach Park proper and so is not regularly cleaned. I checked the mid-water line. 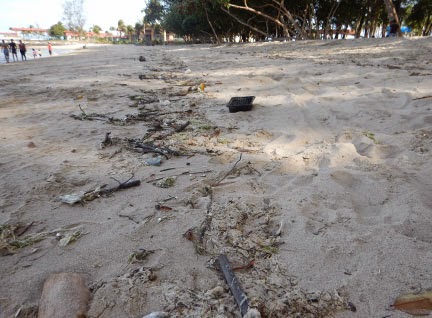 On the mid water mark, there were some large crispy dead fishes. These probably landed earlier today or last night. 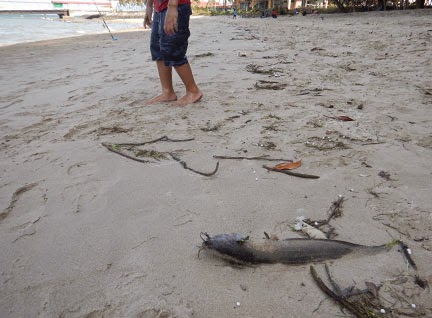 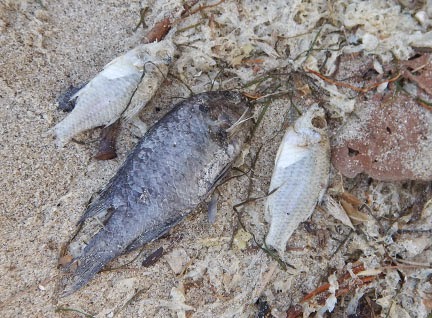 At the low water mark, fresh dead fishes were washing up. A large eel-tail catfish marked the gathering of dead fishes here. Among the dead were cuttlefishes. 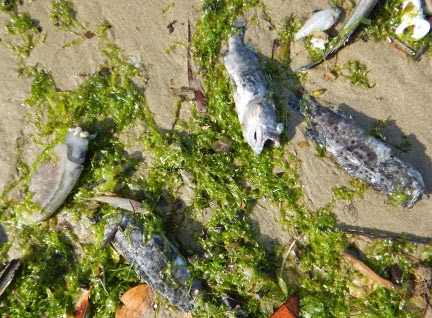 And assortment of wild and what look like farmed fishes. 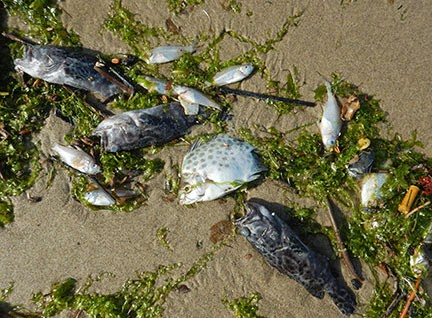 I also stopped by the beach near Carpark 3 and Carpark 4. 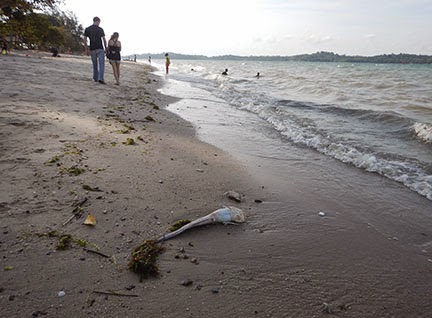 It was heartbreaking to see this large fish wash up. 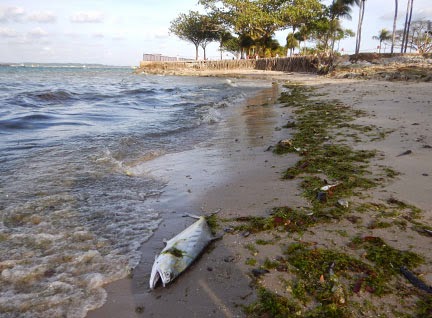 A closer look at the fish.
There was a scatter of large and small fishes, wild and farmed along this beach. 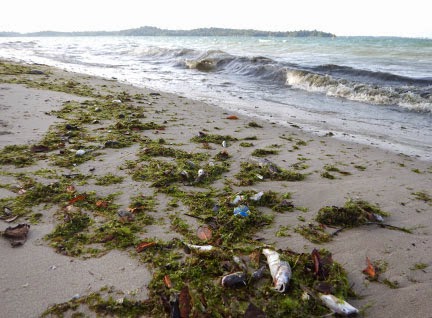 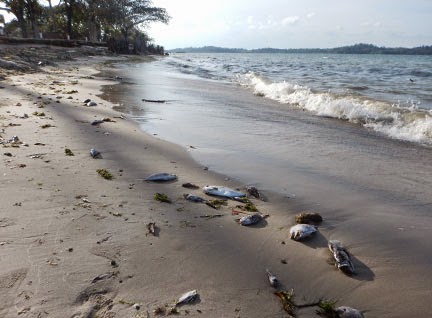 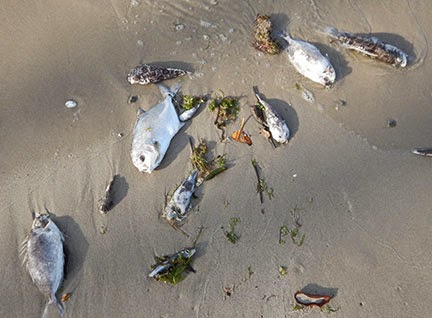 Once again, many cuttlefishes were washing up. 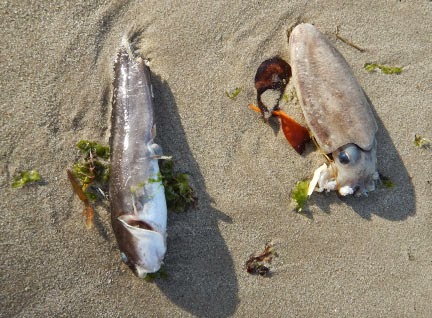 Farmed fishes?
The water near the shore was distinctly browner at Ubin Jetty. 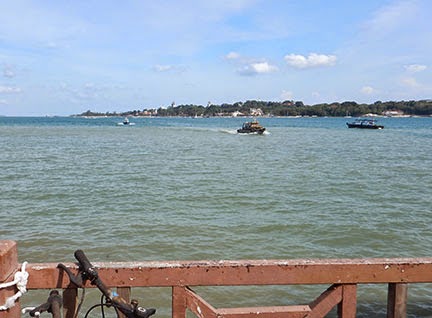 A closer look at the difference in water colour. 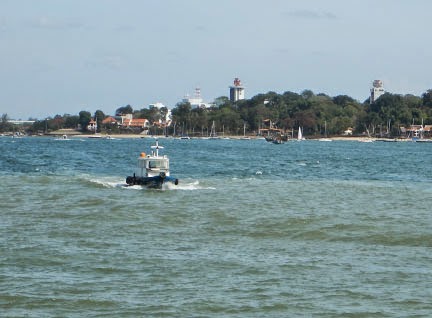 The water was also browner when we approached the mouth of Changi Creek at Changi Point. 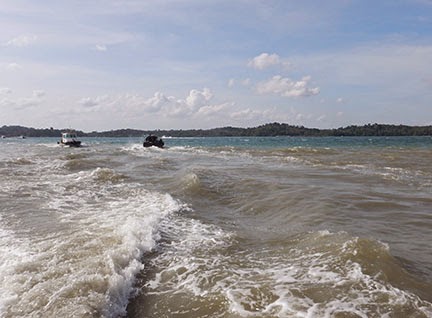 We were scheduled for an Ubin survey. On the way to Ubin, we saw a few dead fishes floating in the water even in the middle of the Johor Strait. We also did a quick check out the shore near Ubin Jetty. There was a scatter of dead fishes, but possibly because most of the dead fishes had already been cleaned up by the cleaner? 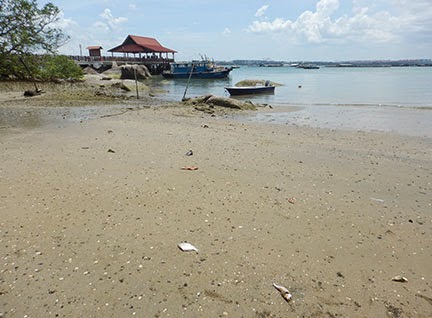 Here's some of the fishes we saw at Ubin.

Dead fishes appear to still be washing up at Pasir Ris. Thanks to Youna Lyons who sent these photos of what she saw at Pasir Ris today.
Sean Yap and Sankar also checked the shore and found some strange fishes. They shared their sightings in this facebook album.
As well as truly enormous pufferfishes. Which was also reported by Youna Lyons.

A report was also shared on Stomp about dead fishes seen at Punggol yesterday (28 Feb).

Darrin Neil reported: "Yesterday (28 Feb) there was nothing. Today (1 Mar) the marina was littered with thousands of (dead) fish. Barracuda, puffer fish, cat fish, grouper and even a sea snake."


[Update 4 Mar: Thanks to Vincent Yap for sharing these photos "taken on Sunday (1 Mar) by a friend along the beach beside ubin jetty. He said that there were plenty of 1foot plus groupers and about 5-6 of those sized like this one in the photo."] 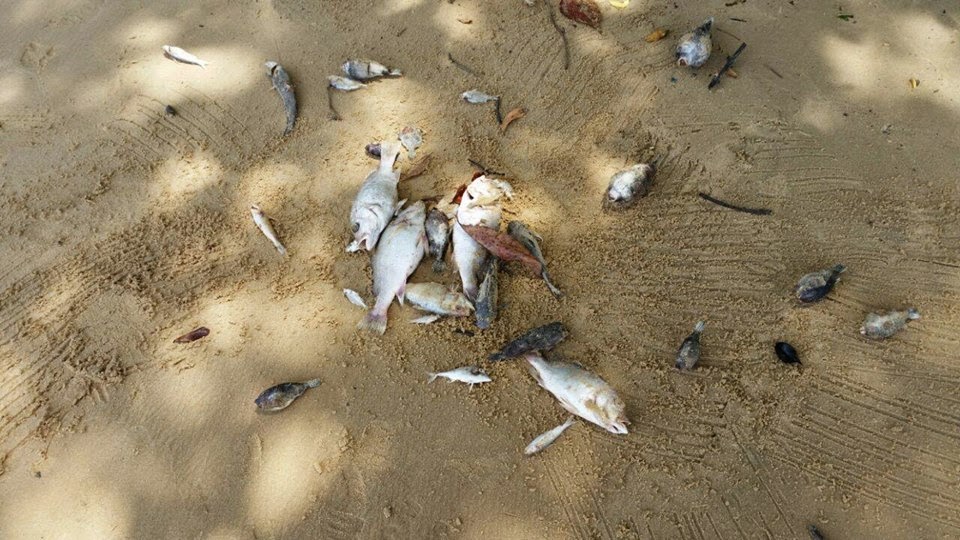 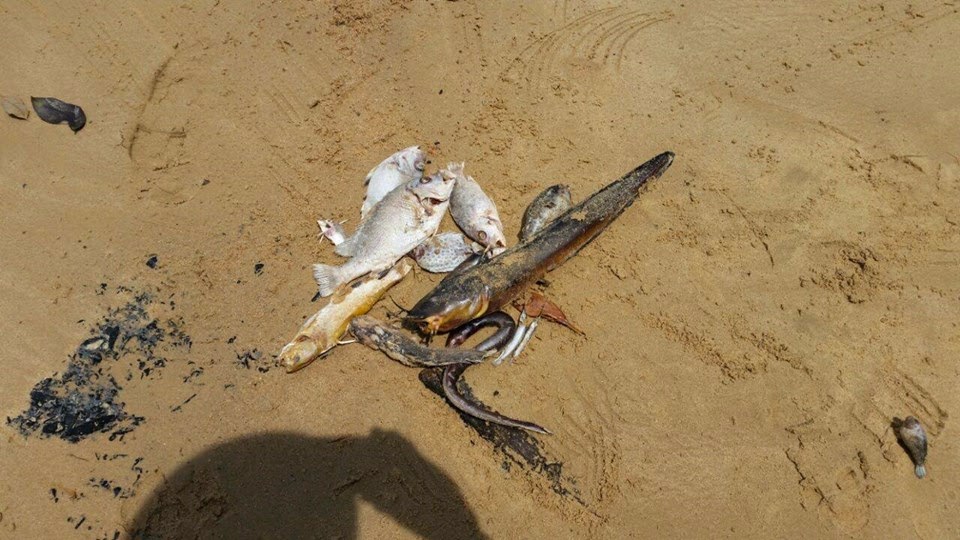 Situation at the fish farms

It appears to be dire. One of the fish farms 'Ah Hua Kelong' has issued an SOS to 'Please save our farm', appealing to customers for crowdsourcing support and shared this video of the mass deaths at their farm.

More info about why it is important to find out what is killing these fishes, and lots more links, in yesterday's post.
Posted by Ria Tan at 8:16 PM