I had a great time guiding at the first predawn walks at the Sisters Islands Marine Park over the last two days. We arrived under a full moon, enjoyed a glorious sunrise and saw all kinds of marvellous creatures. 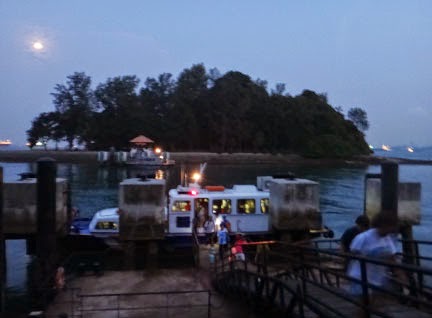 Nearly 100 people made time and effort to join us! Thank you!

Everyone gathered at the Pasir Panjang Ferry Terminal well before sunrise. The Terminal was very busy with thousands of workers heading out to the industrial islands nearby. So we had to keep together to make sure all of us ended up in the right boat! 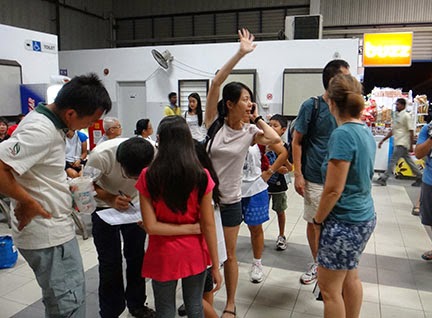 We reached the shore just at sunrise! So beautiful! Because we are so early, we get to glimpse animals such as the Peachia anemone that usually retract deep into the sand in daylight. 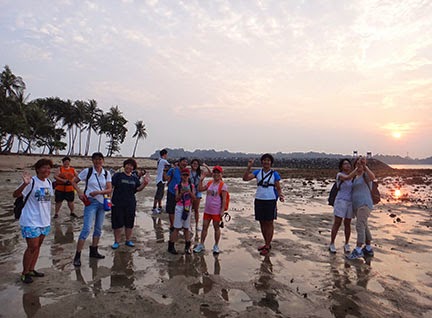 How nice to have Andy Lee aka Daddy Blogger who blogs tirelessly at Sengkang Babies about his family's fabulous adventures. Check out his blog post about their trip. Here we are all taking a look at the fascinating sand collar, an egg mass created by a mama moon snail. 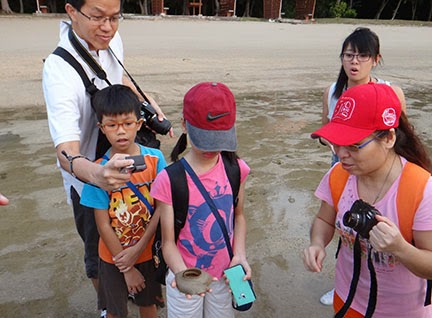 I was so lucky to have Steve (in blue) in my group. He is very experienced and could find and share stories about all kinds of marine life! 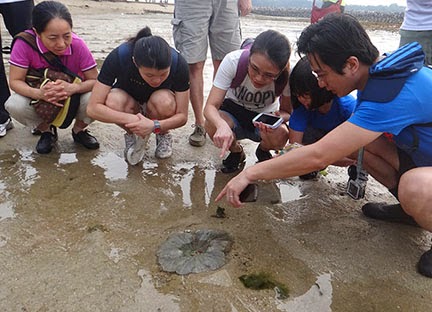 Here, Steve found a goby and its snapping shrimp partner! While the snapping shrimp is a good burrower, bulldozing out a safe burrow with its large claws, it is rather short-sighted. The goby, on the other hand, is a sharp-eyed fish. So while the shrimp works hard on its burrow, the goby keeps a look out for danger. 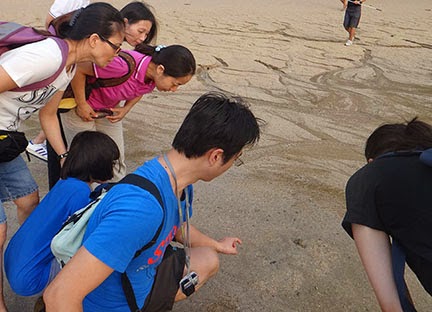 The other visitors are just as sharp eyed. And one found this Long black sea cucumber! 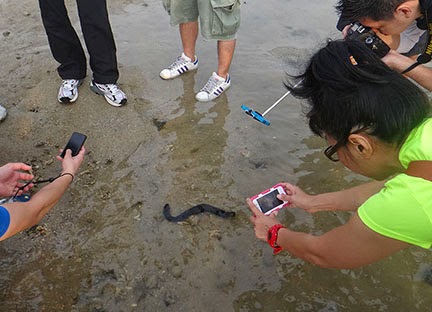 Pei Yan's visitors were treated to this superbly camouflaged Decorator crab!
The most amazing find was by one of the visitors. It's a flatworm that is rarely seen! Rene is now taking a closer look at it to find out what it is. Other marine life we spot include Common sea stars, Tape seagrass (flowering this time around), little patches of Spoon seagrass. 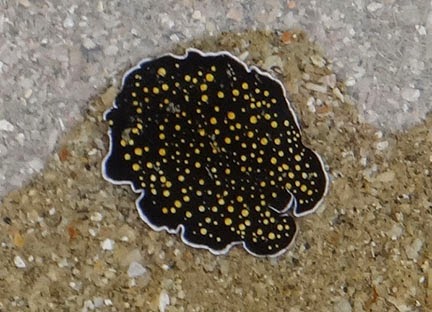 We try our best not to step into the water to avoid murking it up. So that everyone can take nice photos of the marine life in clear water. Marked out here is a large green Carpet anemone with a pair of mama and papa anemone shrimps. 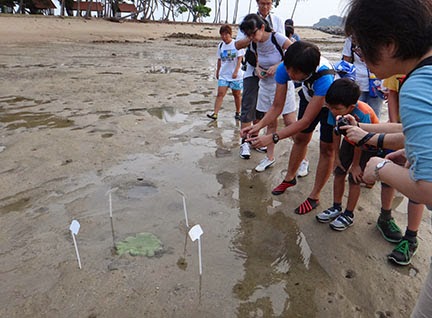 We've put up tape so we know where we can safely stand, to avoid stomping on live corals which surround the Fluted giant clam. Those with a camera on a stick can more effortlessly take photos of everything there. Some of the corals seen there include Brain coral, Montipora coral, Galaxy coral, Circular mushroom coral and Anemone coral. 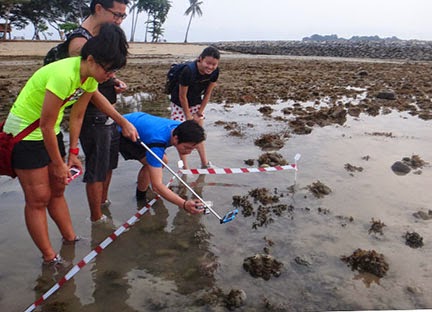 We all try to walk in a single file so as to minimise our impact on the shore. 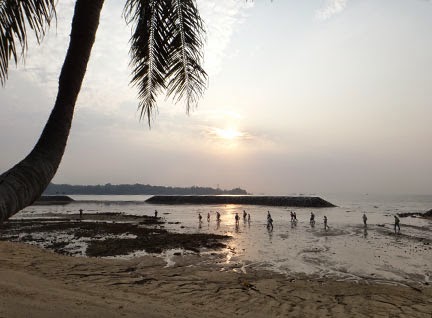 While guides take visitors around, Seekers like Collin head out into the more sensitive parts of the shore to find interesting animals and bring them out to show the visitors. Here, Collin is sharing about the White rumped sea cucumber. Other finds by the Seekers include a Reef octopus, Pygmy squid,  Hairy crab aka Teddybear crab, Red egg crab, Spotted black flatworm, Clear sundial snail shell, Scallop, Black phyllid nudibranchs. 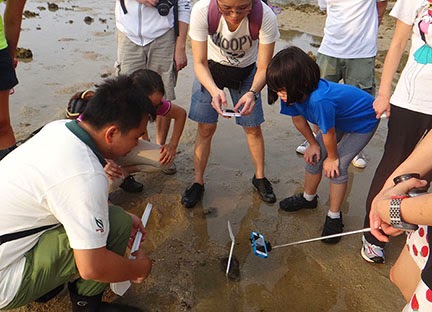 The Sisters Islands Marine Park lies next to the Singapore Straits, a busy and internationally important channel. Every ship that moves between the Middle East to Japan and North Asia will pass through this channel. 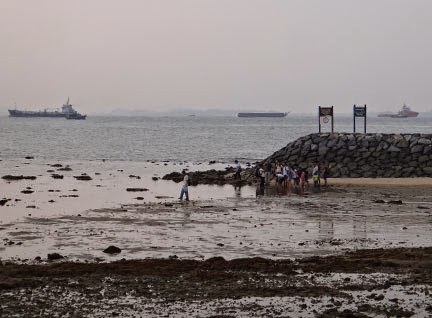 We only have about an hour before the tide turns and we have to leave the shore. 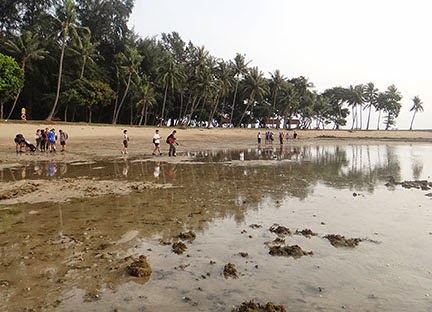 But there's still lots to look at. There are treasures too on the high shore. Such as the pretty puffy white and pink flowers of the Sea poison tree. And its squarish fruits. One of the fruit fell right next to me as I was sharing about it! 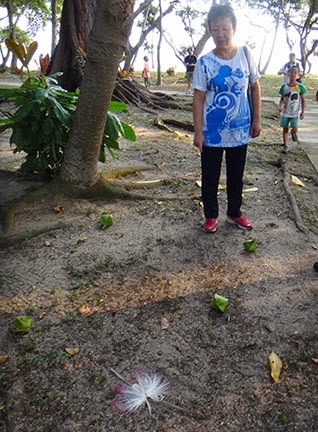 At the jetty, there is a sign board about the Sisters Islands, including the tragic legend about how they were formed. 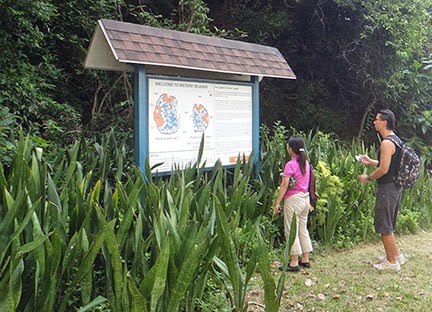 In daylight, the amazing living reef edge right next to the jetty (and all around the islands) is more visible. 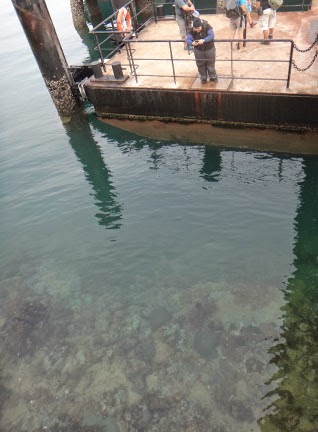 There are coral growing even on the legs of the pontoon! 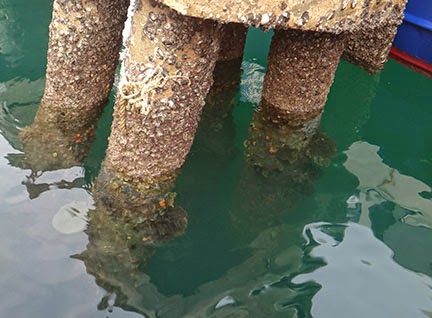 On the second day, we were joined by a team from Channel U who interviewed Chay Hoon and joined her tour. Chay Hoon is not only among the most experienced volunteer guide and diver, but also speaks great Mandarin!
Here's the enthusiastic team who joined us on the first day (10 Sep, Wed). 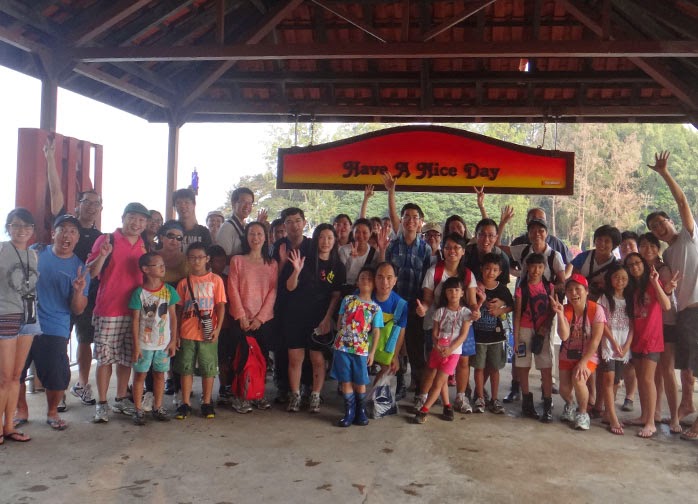 Here's the wonderful people who joined us on the second day (10 Sep, Thu). 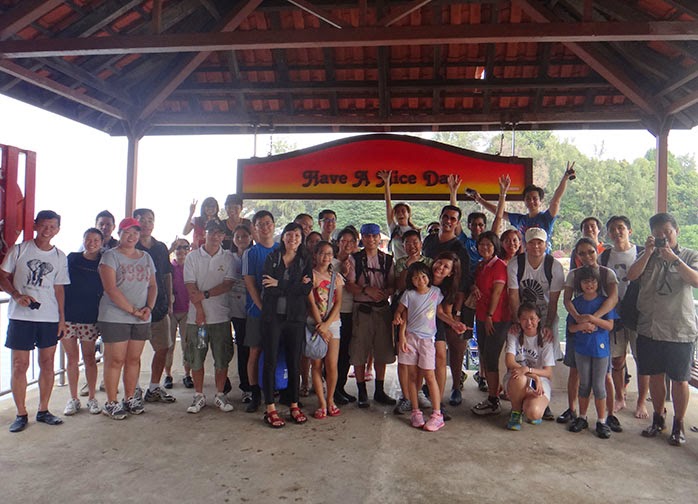 It was such a joy to share one of my favourite shores with these enthusiastic visitors. Thank you!

The Marine Park includes the Sisters' Islands and the western subtidal shores of Pulau Tekukor and St. John's Island as indicated on this diagram.

Want to come for public walks at Sisters Island? MORE dates are available! From the NParks website (also the link for online registration when registration opens).

I will be guiding these dates, so hopefully, I would see you then?