How nice to share our beloved Sisters Island with wonderful visitors on the very first public walks conducted at Singapore's first Marine Park! 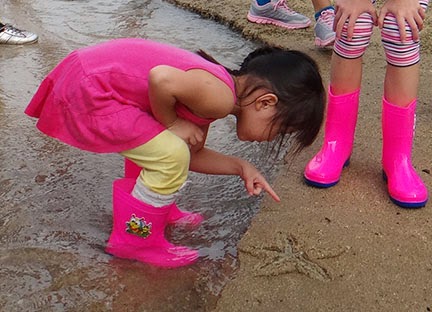 A delighted young lady encounters an enormous starfish! And lots more sightings thanks to the sharp eyes of visitors and seekers.


Early in the morning, visitors and dedicated NParks officers and volunteers gather at Pasir Panjang Ferry Terminal to take a boat out to Sisters Island. 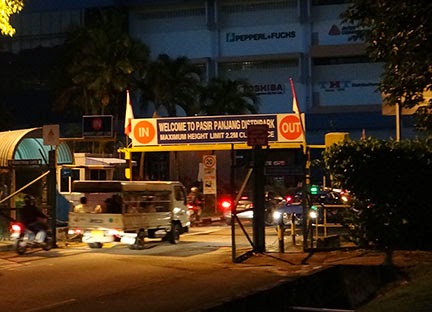 The Terminal is very busy at this early hour as thousands of people use it to reach their work places at Pulau Bukom and other industrial islands nearby. So to help visitors find us, Farhanah holds up a sign near 'Buzz'. 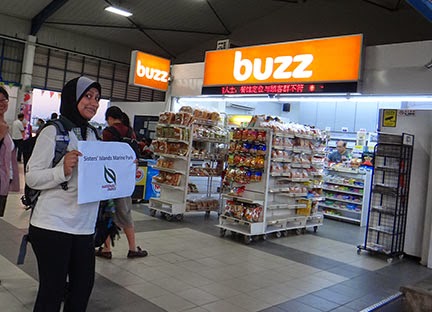 We take a nice large ferry which is all decked out in colourful flags to celebrate National Day. 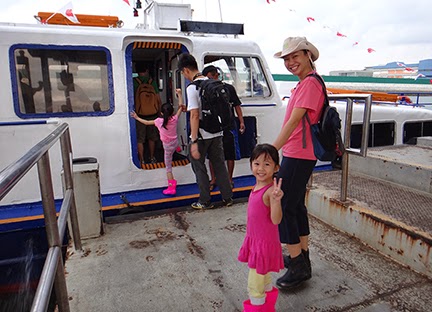 The ferry ride takes about half an hour, and along the way, we take a look and share about the many islands and activities that can be seen. In the photo is the last remaining natural shore at Sentosa. 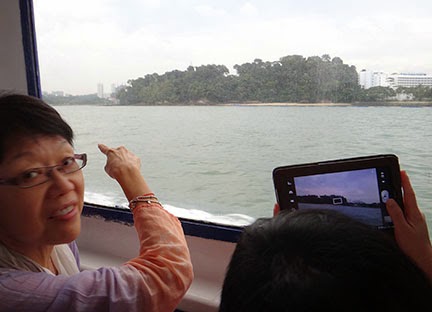 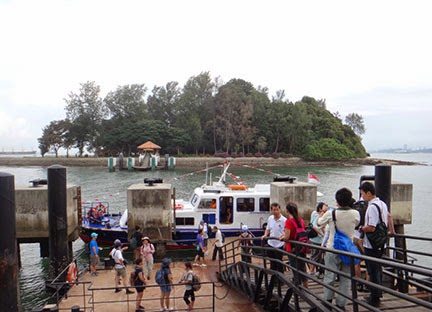 At the jetty, we can have a look at the living corals along the reef edge. We also saw colourful reef fishes and there is even a large Bubble tip anemone with a 'Nemo' (aka False clown anemonefishes). It's like an outdoor aquarium but one which we don't have to clean or feed the fishes! 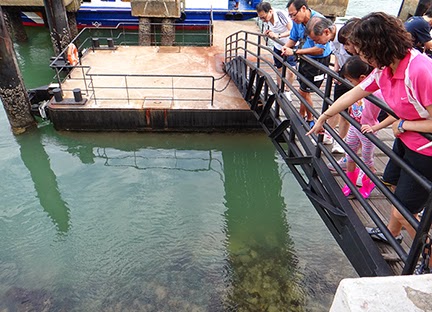 Sisters Island is not far from the Central Business District! We can see the flyer and other landmarks just behind Pulau Tekukor and Sentosa. 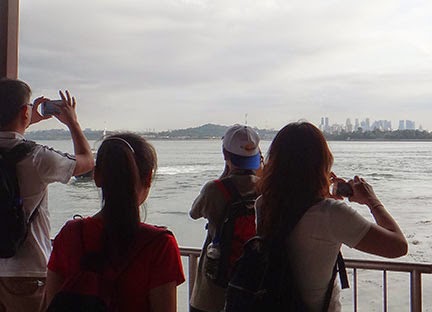 Here's a group photo of the visitors who came today. Apologies, we forgot to take one yesterday! 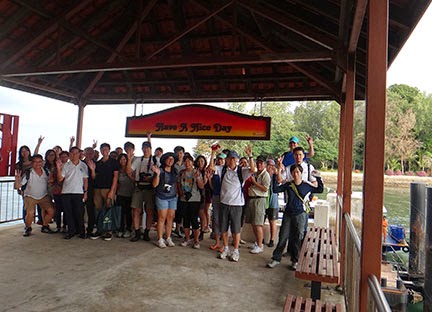 Dr Karenne Tun who leads the NParks team handling programmes for the Park gives an introduction before we head out to the shore! One of the highlights is a Fluted giant clam not far from the dry part of the shore. A little bit of sloshing and we can have a look at this amazing animal that settled naturally in the lagoon, it was not planted here. There are also lots of corals around it, as well as at a 'coral garden' in another corner of the big lagoon. Corals seen include Brain coral, Montipora coral, Galaxy coral, Circular mushroom coral and Anemone coral. We also saw many Frilly sea anemones. 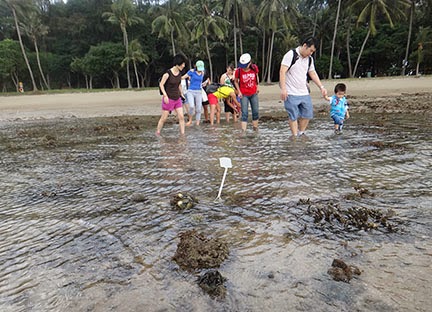 There are large Carpet anemones on the shore. They feel a little 'sticky' when we touch it gently (No poking!). This is because it is stinging our skin but our skin is too thick so we don't feel the stingers. But small animals like fishes and shrimps can be overcome by these stingers. 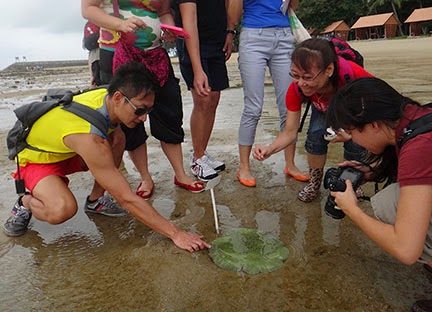 Despite these stingers, very surprisingly, some shrimps have adapted to live safely in the anemone! Here's one of the visitors pointing out the anemone shrimps  that we often see living in the large Carpet anemones on Sisters Islands and our other shores. 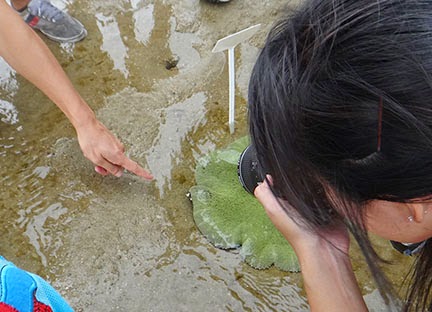 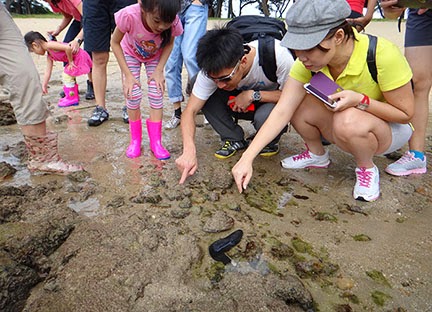 We can gently touch the sea cucumber to feel it. Not slimy, but kind of squishy. 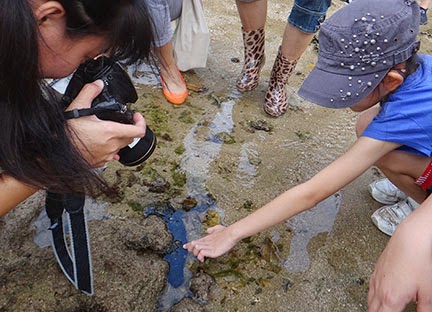 The sandy shore is alive. There are many round white Moon snails burrowing there. We gently have a closer look at the snail and the golden 'door' it uses to shut the hole in its shell. Someone remarked that the door is the colour of maple syrup. We also had a look at a sand collar, the egg mass of the Moon snail. 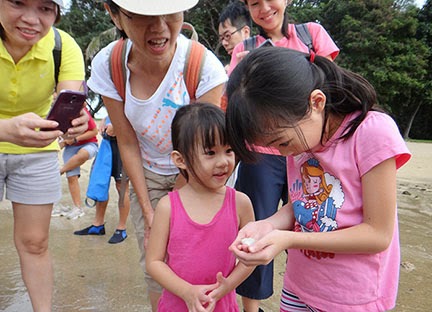 Another sharp eyed visitor spots a large Fan clam. This clam is usually buried pointy end down and has 'hairs' to anchor itself in the ground. 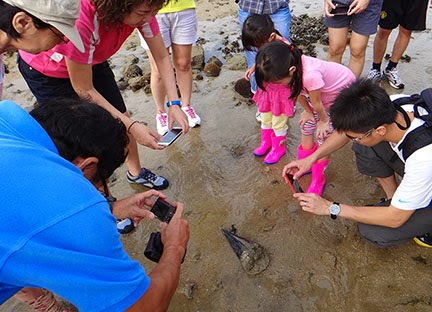 Hurray, we have found the patch of Common sea stars in the small lagoon! We gently have a closer look at its underside and observe how quickly it can burrow into the sand. 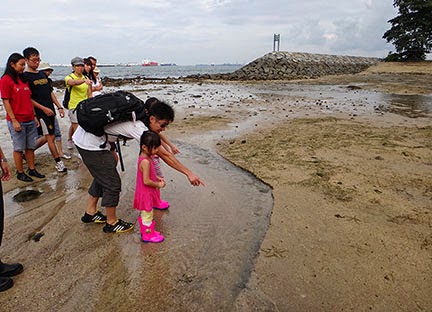 Collin Tong of NParks who runs the Marine Park programmes shares about some squid eggs laid in the middle of this clumps of Tape seagrass. Around us, little patches of Spoon seagrass. Seagrasses form an important underwater meadow where small fishes and creatures find shelter. 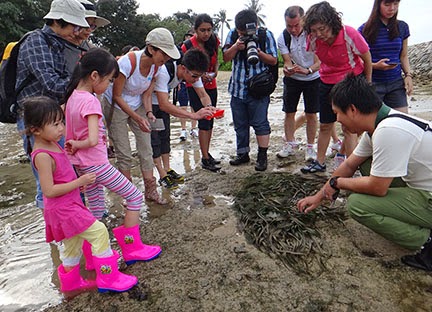 Today, we got sprinkles from the heavy rain that fell around us in the distance! 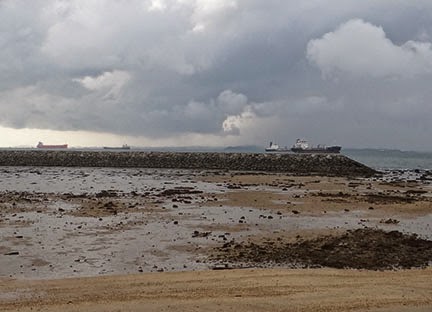 We shelter for a while in one of the many huts on the shore. These are equipped with lightning protectors. But today, we didn't experience any lightning and the rain stopped shortly. 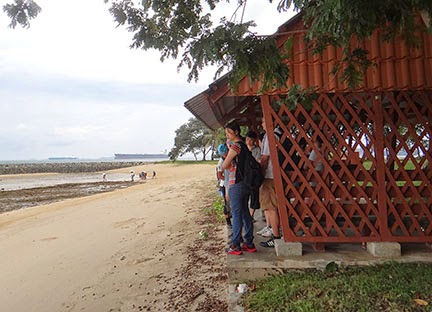 We were lucky to miss the humungous storm that swept across the Sisters Island a few hours after we ended the tour! This brave young gentleman in his blue raincoat did the entire walk without complaint! 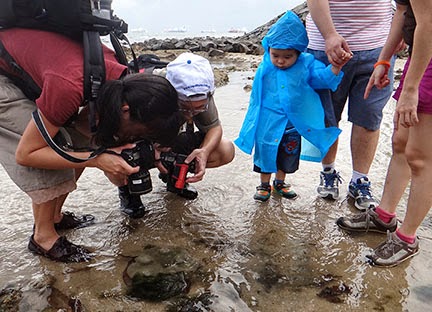 While the guides are bringing the visitors around, NParks officers and volunteers were working hard as 'seekers' to find interesting animals in deeper water and bring them to the high shore in buckets. At the end of the walk, visitors can have a look at them without trampling on the shore and without getting hurt. Afterwards the animals are returned to where they were found. 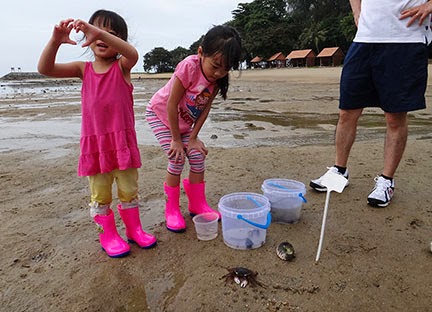 Among the interesting animals that the seekers found were a huge Giant top shell snail, Spotted top shell snails, Black margined nudibranch, Hairy crab aka Teddybear crab. Also the moult of a Sally-lightfoot crab and the skeleton of a Heart urchin.

All too soon, the tide turns and it's time to leave the Sisters Island. Thanks to NParks for organising the walks, and for letting me be a part of it. Thanks also to other volunteers who turned up to guide and to look for interesting things. And not least, thanks to the visitors who made time for the walk and found so many interesting things too! 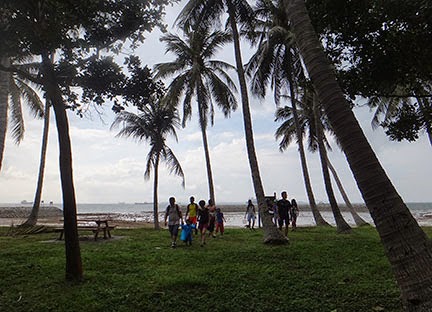 Here's a video clip of the awesome aerial views of the Sisters Islands taken by the Drone by Heng Pei Yan aka Drone Commander. Check out more aerial views on the SG Sea Drone facebook page. 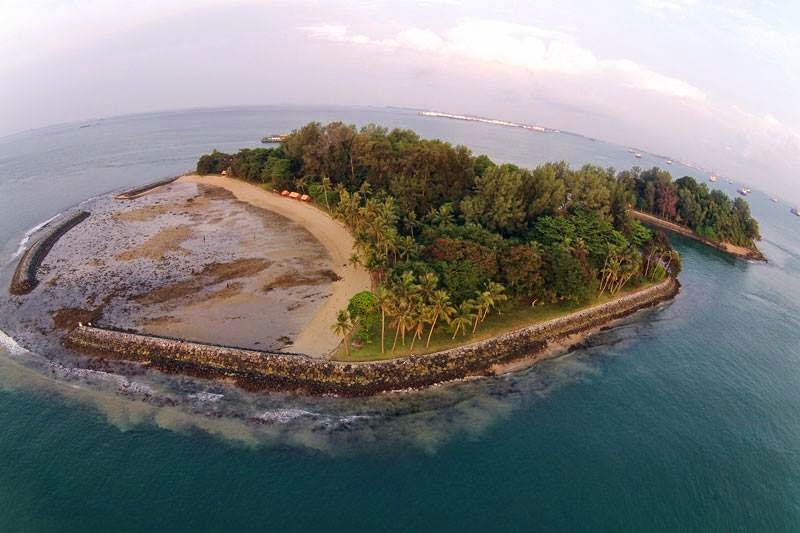 The Marine Park includes the Sisters' Islands and the western subtidal shores of Pulau Tekukor and St. John's Island as indicated on this diagram.
Want to come for public walks at Sisters Island? MORE dates are available! From the NParks website (also the link for online registration when registration opens).

I will be guiding these dates, so hopefully, I would see you then?