A gorgeous sunrise on St. John's Island as we start our survey of the amazing marine life here. 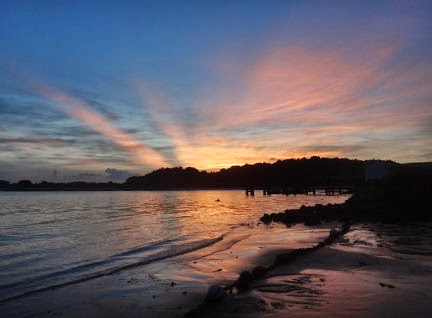 Sadly, we saw some small signs of bleaching on the reefs.


There are some corals growing outside the seawalls that form the artificial swimming lagoons at St. John's Island. 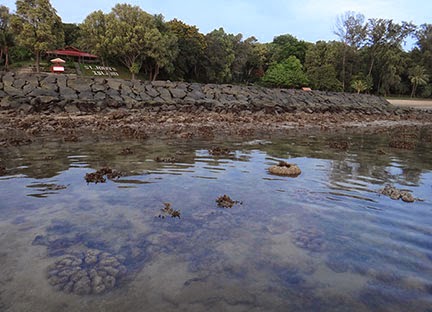 Towards the north, St. John's natural shores remain untouched. But I couldn't walk that far today. The broken foot is still not very good at walking long distances. Today, I also checked for coral bleaching near the high shore, I couldn't go into deeper water. I did not see any corals that were completely bleached, but did see many with white or yellowish patches. These were mostly on the high shore. 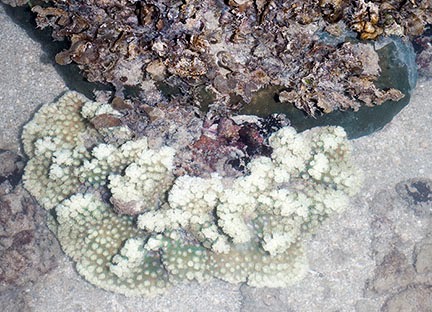 Almost all the large Pore boulder corals I saw had large pale patches, especially the upper portions which are exposed at low tide. Some were bright yellowish or green. 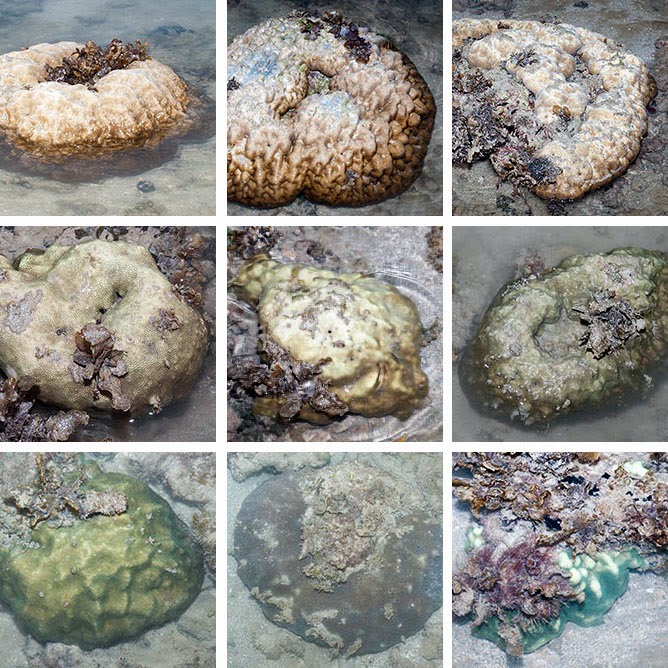 Some of the Anemone corals were very pale, others were still purplish. 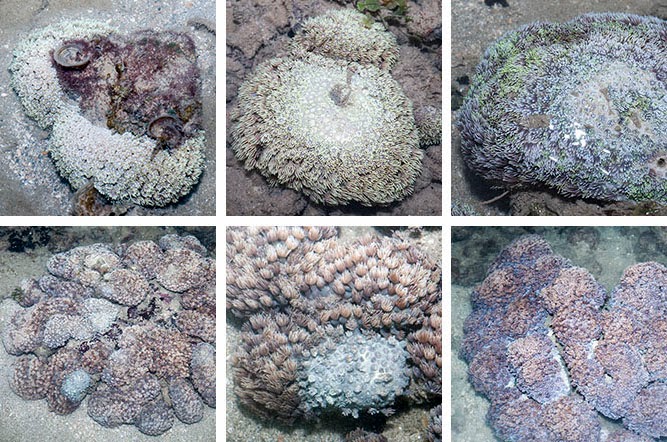 I saw one large Small gonipora corals that seemed alright, but a small one was rather green.

I saw two medium sized Flowery disk corals that were very yellowish, but also one that was a normal dark pink.

I saw one Cauliflower coral and it was ok, also one Sandpaper coral, it had whitish edges. Other corals that I saw that seemed ok included Plate montipora coral, Tiny ring coral, Galaxy coral and a small Mole mushroom coral. 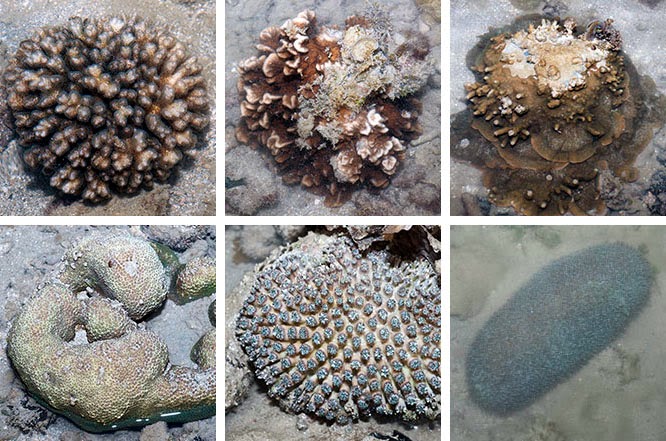 Most of the corals on our reefs are Favid corals. I saw some with white or yellowish patches.

Most of the Favid corals, however, seemed ok. 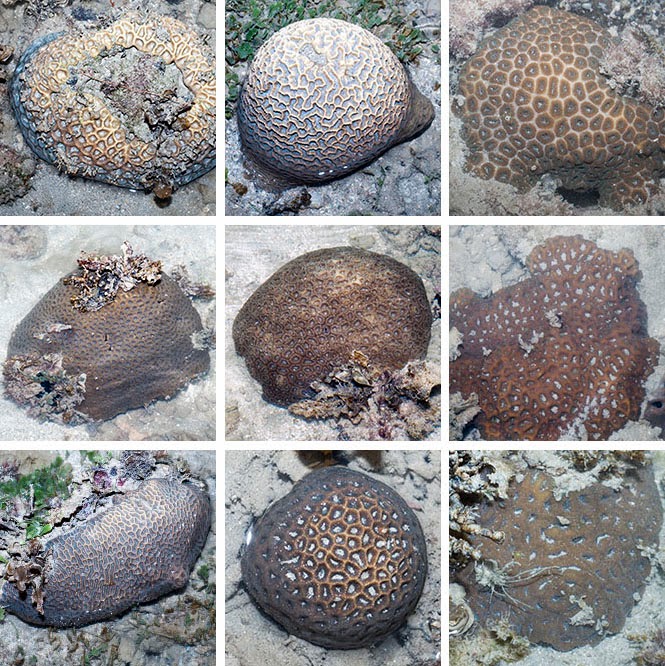 The Sea mat zoanthids were mostly nice and brown with only a few colonies that were rather pale, but not yellowish or white. Jonathan took photos of leathery soft corals and they seemed ok, not bleaching.

Some of the anemones I saw were a little pale and yellowish. Including this Frilly sea anemone and Haddon's carpet anemone.

It looks like a drifting bit of twig, but this is a young Razorfish. This flattened fish with a long snout swims head down and has a spine-like tail that can bend. 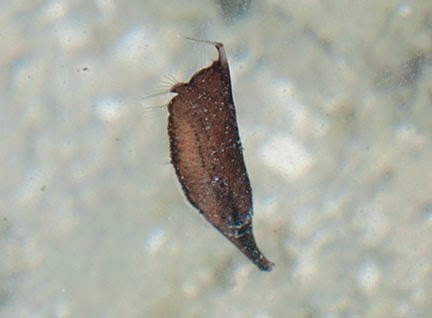 I saw tiny fishes including what looks like juvenile Honey-head damsel and Threespot damselfish.

I saw two Jorunna funebris nudibranchs today. This one seems to be crawling over to the blue sponge which it is said to feed on.

I also came across a Starry mouth nudibranch. This odd looking creature has a pair of 'hands' near the front end. The sausage-like things on its long slender body enclose its feathery gills. There are many Common sea stars in the sandy swimming lagoon. At low tide, they are buried just beneath the sand, leaving tell-tale star shapes on the surface. There are also lush patches of Spoon seagrasses (with small leaf blades) in both swimming lagoons. Jonathan has a photo of Tape seagrass that is nice and long (not cropped). 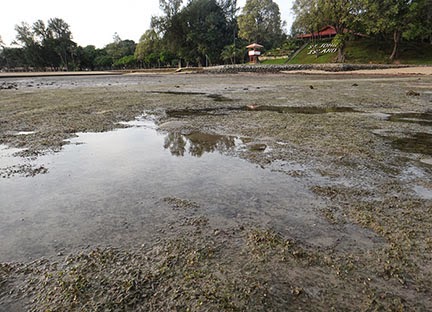 I also managed to take a real close up of this fiddler crab that was trying to stay immobile among the seagrasses. 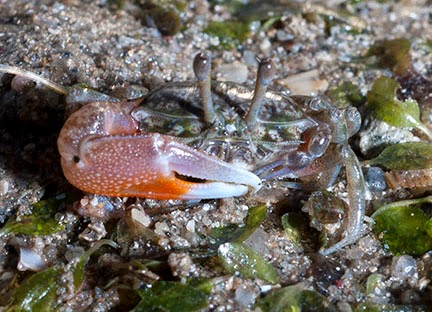 There was even a Slender sea pen! Something I usually see in the seagrass meadows on our Northern shores. 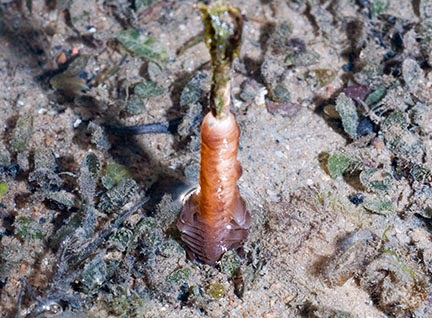 There were many Haddon's carpet anemones and most of them had a pair of anemone shrimps in them. 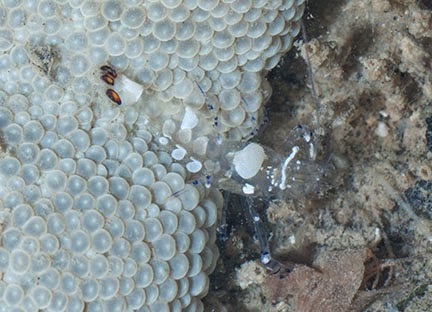 Sadly, I saw a dead or dying Galloping sea star. The tips of its arms were rotting away. I also saw a dead shell of a Sundial snail.

Our last trip to St. John's Island to do a similar survey was in Feb 2013.

Fortunately, I didn't see any obvious signs of the oil spill that landed on St. John's Island five months ago in Jan 2014.
We got excited seeing 5 of these Swallowtail moths at the Ferry Terminal, but when we arrived at St. John's Island just before sunrise, there were lots of them at the pier fluttering around the lights. Jonathan estimates there were 50 of them! When we headed home in daylight, however, we didn't see any sign of them. There is currently a 'population outbreak' of these beautiful moths. 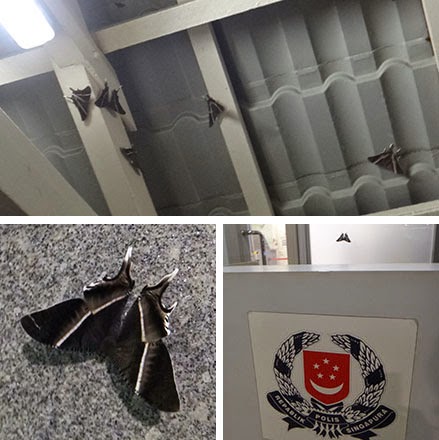 We arrived just as the sun was rising, and before the lights at the Central Business District on the mainland were switched off for the night. The beautiful shores of St John's Island are about 15 minutes from the mainland by fast boat. 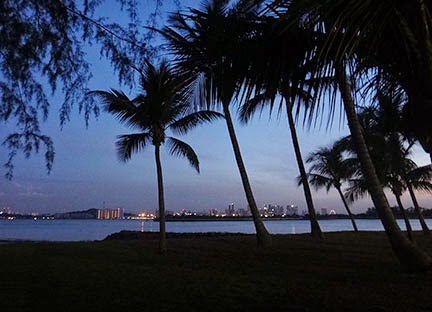 There was a boat at the island stacked high with large fish traps. Jonathan and James also removed some fishing lines which were entangled on the natural reefs. 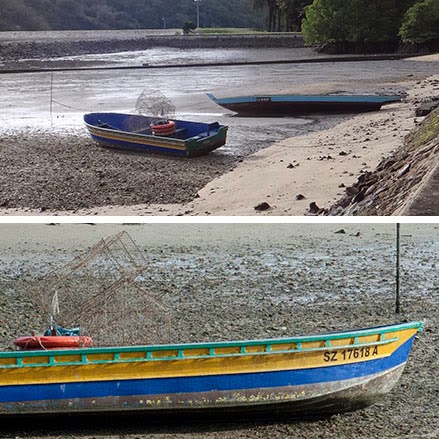 When we arrived at Marina South Pier, we noticed some worker filling up the holes in the seawall. Hopefully, we can help persuade the authorities that 'broken seawalls' actually allow marine life to settle naturally, including coral reefs and even mangroves! More about this here. NEA recently issues an advisory that ""Rainfall for Singapore between June and September 2014 could range between 10 - 40% below average, while the average daily temperature is expected to be about 1°C above average". Such conditions can trigger mass coral bleaching.

Let's hope our corals make it through the weather ahead. The team will be trying to survey as many shores as possible during this period to keep an eye on things.

Photos and posts by others on this trip