The elusive Masked burrowing crab was seen again today!
We also saw other special critters and had a special guest with us. For a very special trip to Changi today!


Our special guest spotted a fish that everyone overlooked. It was washed up on the high shore among the seagrasses and appeared dead. But when Ivan put it gently into a pool, it was still alive. Probably a young grouper? Yes, says Shannon Lim of OnHand Agrarian who says its an Orange spotted grouper. Seagrasses are important habitats for young fishes, crabs and other animals to grow up safely. Without seagrass meadows, our favourite seafood may disappear. 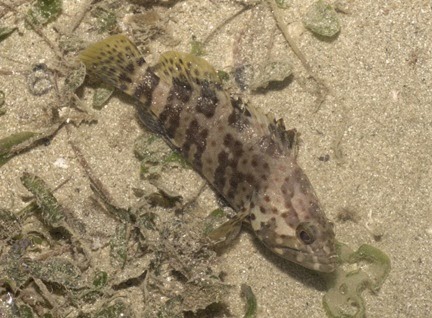 Oo, a Big-head seagrass octopus! Unlike those seen on the reefs, this seagrass octopus has a huge head and rather short skinny arms and so far, I've only seen it regularly on Changi and northern shores like Chek Jawa and Pulau Sekudu. 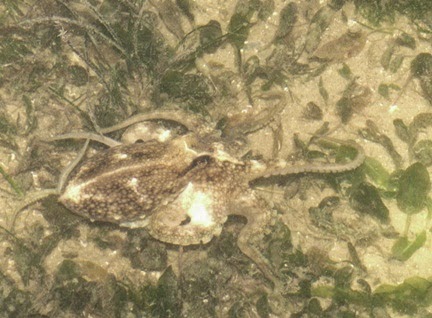 Like other octopuses, it can rapidly change its colours. We have yet to identify this octopus. 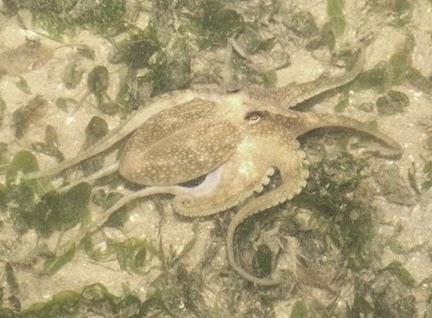 A big fat Geographic sea hare! Sea hares are sea slugs (snails without shells!) and can be large. They have a pair of flappy tentacles that possibly resembles the ears of a hare and they eat seaweeds. Aside from these, they are slow and don't resemble land rabbits, although they are kind of cuddly for a slug! 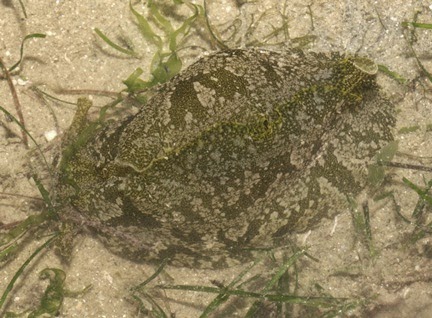 Chay Hoon found another sea hare, it's the Hairy sea hare. Many sea hares release a purplish dye when they are annoyed. The function of this dye is not known. Unlike an octopus or squid, it doesn't form a screen for a quick escape as most of these slugs usually don't move very fast. One study found that the dye irriates other animals such as crabs, sea urchins, fishes and bristleworms. 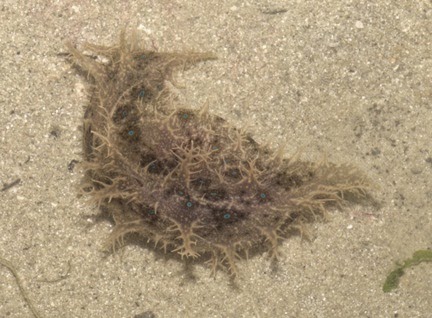 Chay Hoon also found a Sea apple! This brightly coloured blob is actually a sea cucumber! In nature, bright colours are used to warn off predators. And indeed this Sea Apple sea cucumber is highly toxic to other sea creatures. It does not make good aquarium specimen as it often kills off its tank mates. 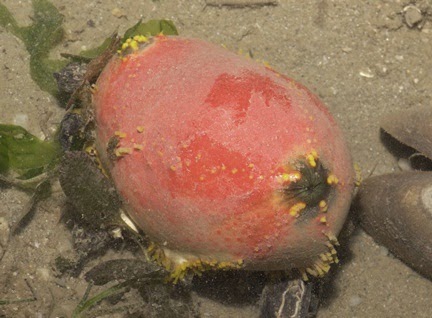 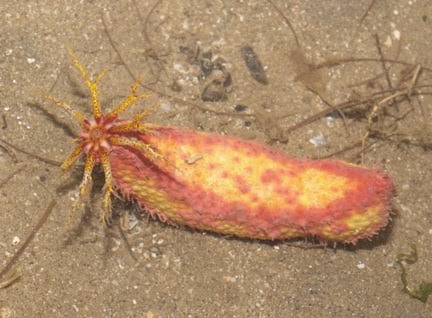 There are also lots of little Biscuit sea stars that look like they have been made with a cookie cutter. In the sand were many fast moving Plain sand stars as well as Painted sand stars. Marcus also found a tiny orange coloured Cake star. Sadly, we couldn't find any baby Knobbly sea stars that we saw here in the past.

There were also many large Ball moon snails. These snails can enormously inflate their bodies, hiding the shell, so they look like giant white slugs. Moon snails are fierce bulldozing burrowing predators. They feed on buried bivalves and snails. A moon snail wraps its huge foot around the hapless prey to suffocate it. If this fails, it secretes an acid to soften the victim's shell. With its file-like 'tongue', a hole is slowly drilled through the shell. 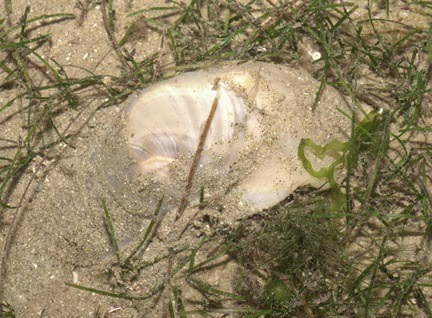 Just before we left the shore, we spotted an Olive snail burrowing in the sand. Earlier on, Ivan also found a Black lipped conch and we saw lots of Gong-gong. These conch snails can 'jump'. While most other snails have a broad 'door' (called the operculum) to seal the shell opening, members of the Conch family have a narrow operculum. Instead of a broad flat foot, a conch has a narrow foot that is strong and muscular. The conch digs its claw-like operculum into the sand and pushes against it to 'hop' forwards like a pole-vaulter. We also saw the egg capsules of Spiral melongena and many 'Sand collars' which are the egg mass of a moon snail. 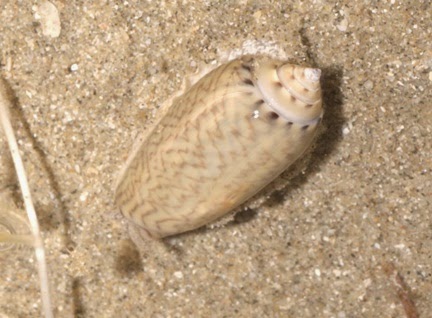 The other special find was this sea anemone stuck to a shell occupied by a hermit crab. We have all not seen this kind of sea anemone before. 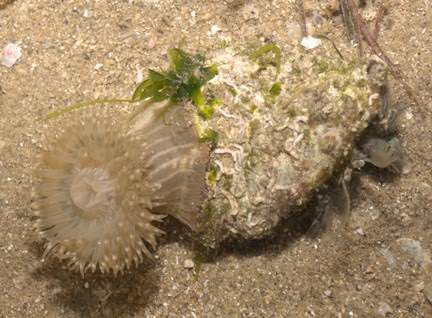 Here's another look at the sea anemone, with the hermit crab which also looks kind of special. Fortunately, we have Nick with us who is our local expert on sea anemones. Hopefully, he can help us sort it out. 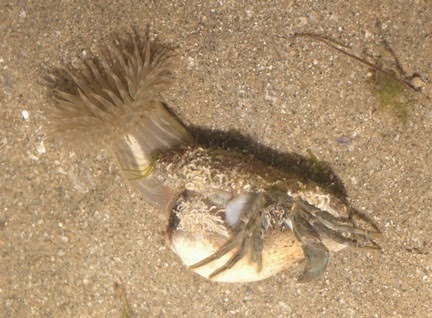 There were also many Swimming anemones today. These sea anemones can actually swim. We also saw some Carpet anemones. The medium sized ones are probably Haddon's carpet anemones while the tiny ones are not necessarily baby Haddons but may be another species; Mini carpet anemones.

While there were lush growths of Spoon seagrass and Needle seagrass, the Fern seagrass I saw was looking rather poorly. Many were reduced to stalks without any leaflets on them. Oh dear. But perhaps there are healthy Fern seagrass growing in deeper water. The tide today wasn't very low. 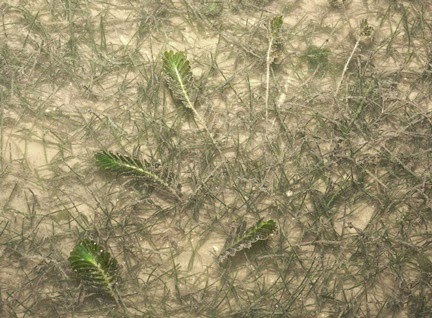 Other sightings include many tiny to small Flower crabs and Elbow crabs. Kai and Ivan found Leaf porter crabs too. We saw some sea pencils while it was still dark (they retract into the ground at sunrise). As usual, there were only a few cerianthids. The team also saw some large living Noble volutes and one was apparently eating some other sea creature! We also saw many Hammer oysters and Window pane clams and Fan clams (mostly dead).

We enjoyed a glorious sunrise today! And making it even more special, Minister Desmond Lee was with us on this trip. He earlier shared with me his boyhood days exploring Changi and I'm touched he took time off from his busy schedule to drop by and check out this stretch of Changi with us today. 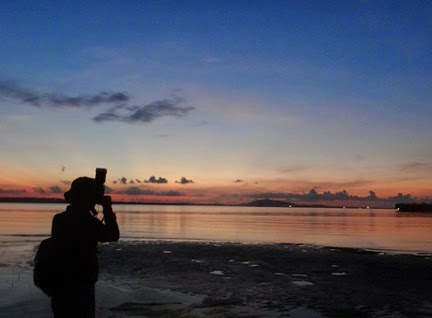 This shore is right under the flight path of planes landing at Changi airport. So it's sometimes hard to talk with the roar of back-to-back planes landing. 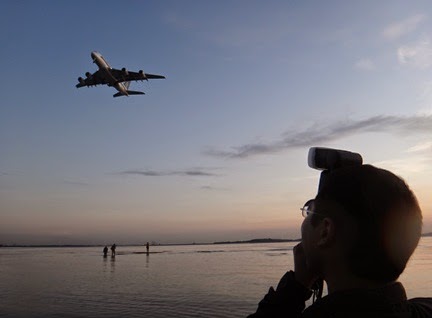 Thanks to the rest of the team for finding stuff and sharing our shores: Ivan Kwan, Marcus Ng, Toh Chay Hoon, Nicholas Yap and Wu Bokai. 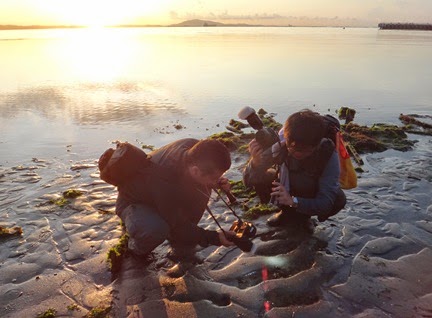 The lush seagrass meadows at Changi are only exposed at very low spring tides. These tend to happen before sunrise. 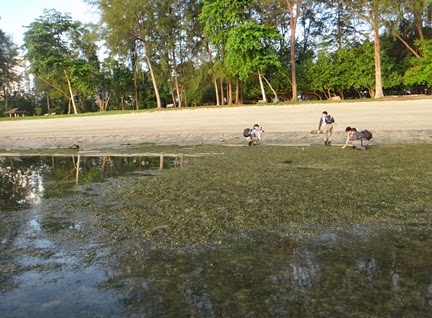 As the sun rises, I noticed someone heading out from the Changi shore in a kayak with a large box (at top right corner of the photo below). 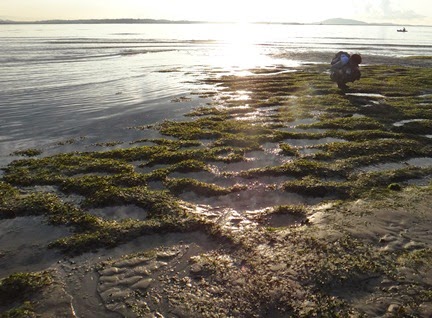 He stopped in the distance and seemed to be tending to a long driftnet laid parallel to the shore. I could see floats in a very long line, indicating a submerged net. I didn't have my long lens with me so little sneaky swimming camera had to strain to get this shot. 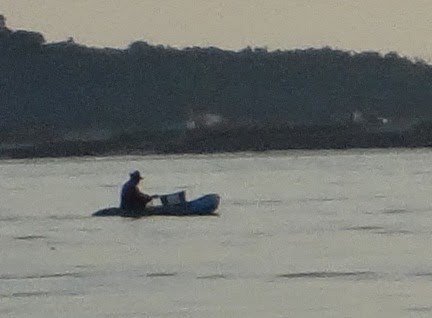 Was this the same man I spoke to in Jul 2011 who laid a long driftnet that we discovered at low tide. At that time, when I tried to make conversation, he merely said that he should not have laid the net so high up on the shore as it would be exposed at low tide. He then just quietly walked off and paddled away.
In Jul 2011, where the net was laid, we noticed furrows in the seagrasses that might have been made by dugongs. Dugongs are air-breathing mammals and will drown if they are trapped underwater in a net. Some of us are gathering information on abandoned driftnets as part of Project Driftnet, to better understand this heartbreaking issue.
My last trip here was in Jun 2013 when we saw lots of Masked burrowing crabs too! I hope our amazing Changi shores remain well until the next time I visit.