A pair of beautiful islands, the Sisters Islands, lie just 15 minutes by fast boat from the skyscrapers of the city's main business district! 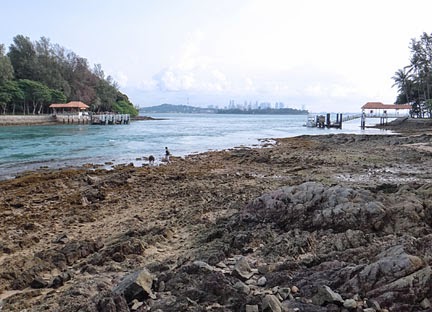 I had a wonderful time exploring both islands this morning, with some special finds.


We first arrived on Big Sisters Island to amazingly good visibility. We could see the reefs growing right next to the jetty. On the horizon is Little Sisters Island that lies across a narrow but deep channel. 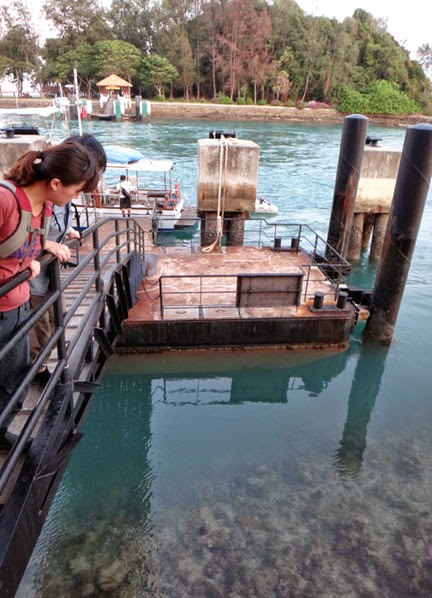 Here's a look at the reef growing right next to the jetty. 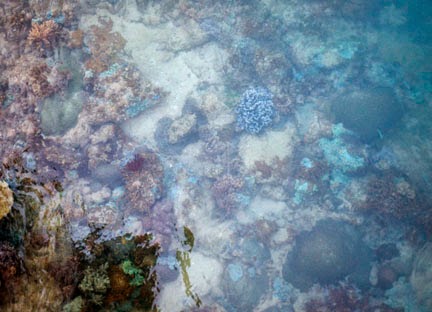 We check out the large lagoon at Big Sisters Island where the corals have crept back behind the artificial seawalls. 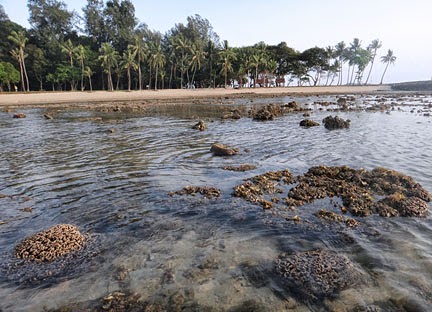 Here's one of the several large colonies of Anemone corals found in the middle of the lagoon. Today is my first time actually going onto a reef after I broke my foot 7 months ago. I managed to walk around quite well with the help of a walking stick! 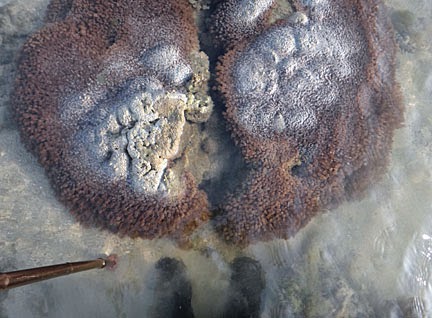 I managed to hobble around the sandier part of the shore and was glad to see many of my favourite hard and soft corals and marine creatures are very much alive and well. Unlike during my last trip here in Jul 2013, today I did not come across any large bleaching corals, and in fact saw many healthy Crinkled sandpaper coral which are usually the first to bleach. 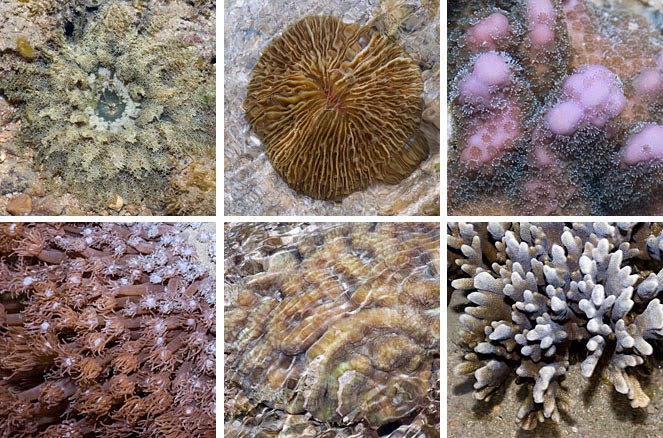 As soon as we arrived, we spotted this pretty nudibranch in a pool near the high shore. It's a Bornella nudibranch which is often seen near our reefs. 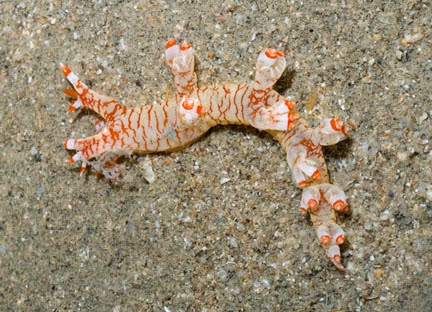 Marcus found a Diadema sea urchin, which was quite active and waving its long spines menacingly. There were also many Spider conch snails and large Giant top shell snails. 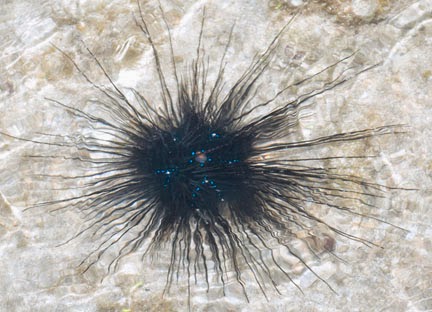 Joelle found a special flatworm and Marcus took a photo of it. But I only found this more commonly seen Dawn flatworm. 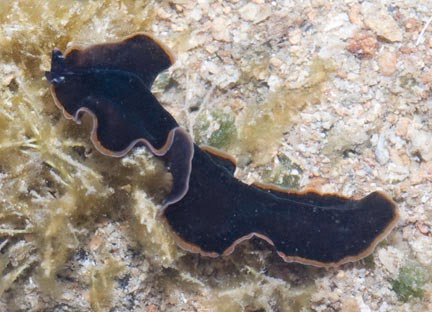 There were some Haddon's carpet anemones, and all of them had anemone shrimps. The mama shrimp is fat and has lots of large white spots. There were also many Giant carpet anemones but I didn't find any clown anemonefishes in them. Oh dear. I hope they are not being removed. 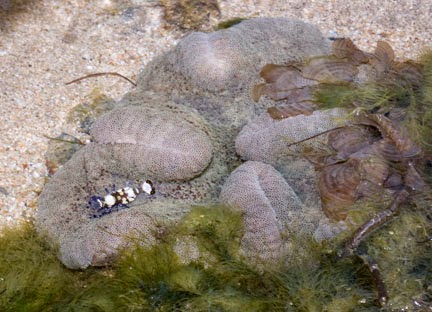 We also paid our respects to the Fluted giant clam that we found in this lagoon in May 2013. I'm so glad to see it doing well. Later on, a seahorse was also found! 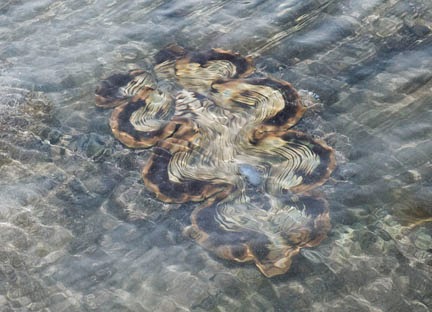 There are seagrasses and seaweeds (mostly Bryopsis seaweed) in some of the lagoons. Here, all kinds of juvenile reef fishes find shelter and grow up in safety. There were also Common sea stars on both Sisters Islands. On Big Sisters Island I saw the small clump of Tape seagrass in the smaller lagoon and tiny-bladed Spoon seagrasses. There was a much denser growth of Spoon seagrasses in the larger lagoon of Little Sisters. 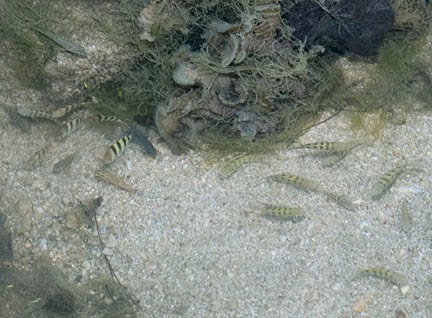 Another special find for me was this odd situation. What is that white strip on the brown Mermaid fan seaweed? A closer look reveals that its the egg ribbon being laid by a nudibranch!

Here's a closer look at the beautiful Blue-spot nudibranch. 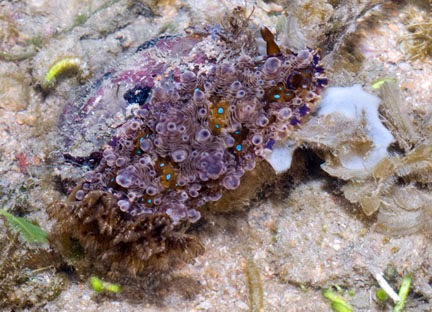 The special find of the day for me was this thing that got washed up on the shore. I think it is the Blue button (Porpita porpita) which is not a jellyfish but a hydrozoan. 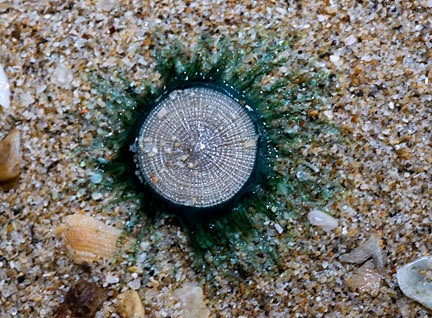 There is usually a Great billed heron foraging on Big Sisters and we're glad to see it this morning. 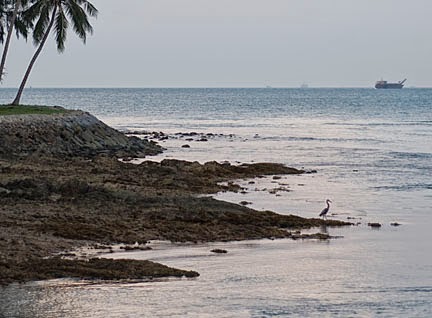 There are some Long-tailed macaques on this island. But they don't harrass people. 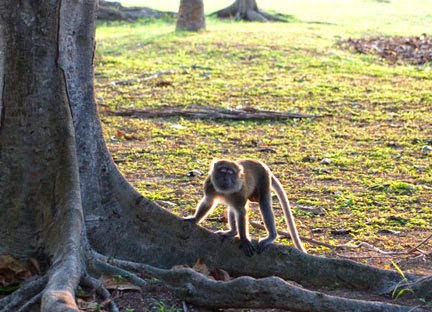 Unfortunately, they do raid the bins. The bins are monkey-proof, but humans often don't lock them properly or don't put the trash into the bins. 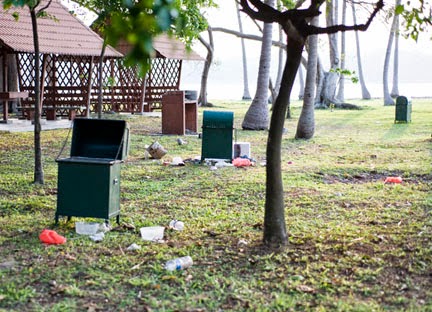 We decided to stop by at Little Sisters Island too. A huge ferry had just arrived there with lots of families. 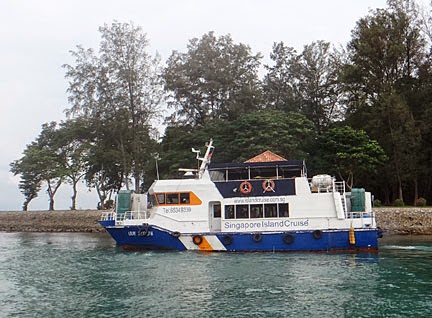 The families were having fun with a picnic and easter egg hunt! It's nice to see people enjoying our offshore islands. 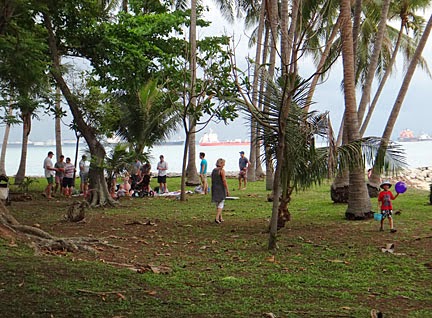 There were also many fishermen on both islands. Long weekends and holidays usually attract many to visit these beautiful islands for recreation and fun. 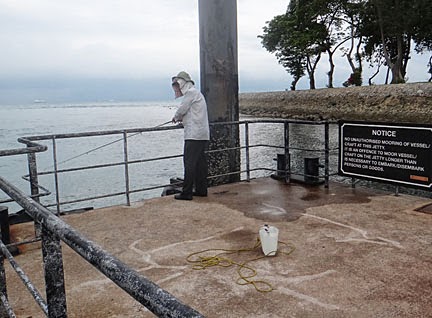 As wet weather threatened, we headed home. Here's a last look at a lagoon on Little Sisters Island. 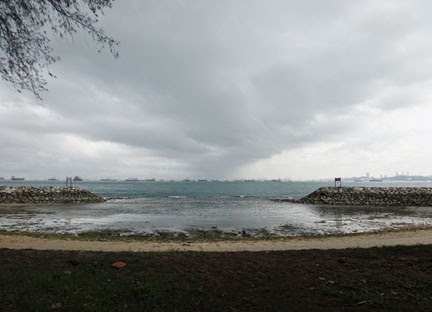 The Bad Foot managed to walk the shore, although I avoided the uneven rubble and rocky areas and stayed near the high shore. It was a challenge to jump from the jetty to the boat. But I managed the trip and its challenges with help from kind friends! 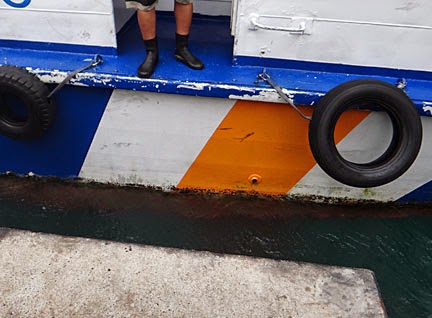 The Bad Foot (on the right) did well at the end of the trip. Despite walking and being wet for several hours. It's not swollen and isn't complaining very loudly. Although it did mutter quietly towards the end. 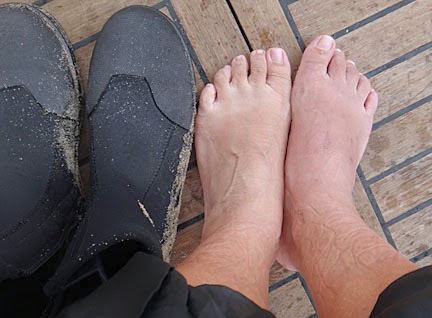 At the end of the boat trip, we have our last treat. There is amazing marine life growing even at the Marina! 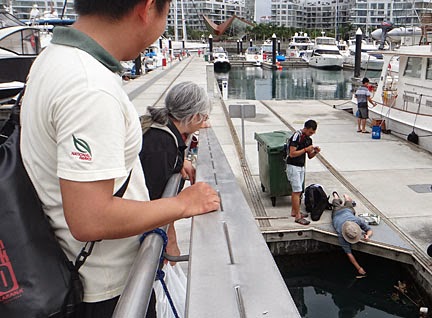 Lots of amazing hard corals and soft corals have settled on the sides of the pontoon! With little reef fishes swimming among them.

Colllin spotted a tiny transparent solefish swimming in the waters. Kwan Siong and Marcus go to all lengths to take photos and video clips of it. 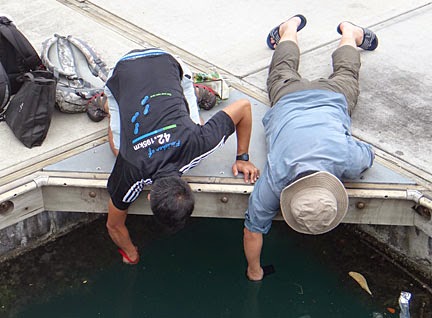 My last trip to Big Sisters Island was in July 2013. I'm glad today the reefs seem to be doing well despite the oil spill in Feb 2014 near the Sisters Islands.

How to visit the Sisters Islands: There is no ferry to the Sisters Islands. To visit, you will need to charter a fast work boat from Marina South Pier. Rates will have to be negotiated with the operator which depends on their availability and diesel prices among others. The work boats operate 24-hours, but the booking desks at the Pier only opens during office hours. The work boats generally service business for ships in our harbour. These boats are not intended for leisure trips and are not designed for comfort. Admission to the island is free. Camping overnight requires a permit from Sentosa Leisure Group (SLG). There is no charge for the permit. More on the Sentosa website It is advisable to consult SLG if you are bringing large groups even if it's just a day trip. Currents around the Sisters Islands are very strong and swimming is not advisable outside the swimming lagoons.

More about the Sisters Islands and the tragic legend behind their name.