Many of our richest reefs appear to have been impacted by the two oil spills that happened in less than 24 hours on 29 and 30 Jan 2014. Reports have been coming in from shore explorers of oil slick impact on Kusu Island, Pulau Semakau and St. John's Island.
Here's some highlights of these reports. Thanks to the dedicated volunteers and shore workers for conducting the ground surveys over the Lunar New Year holidays.

The team split up with one group checking out the oil spill impact on Pulau Semakau. Pei Yan's blog post outlines the areas covered. Oil had washed up on the shore and the impact was assessed to be worst on the mangroves lining the shore (red line). Mangrove roots and leaves were coated in oil up to the high water mark. 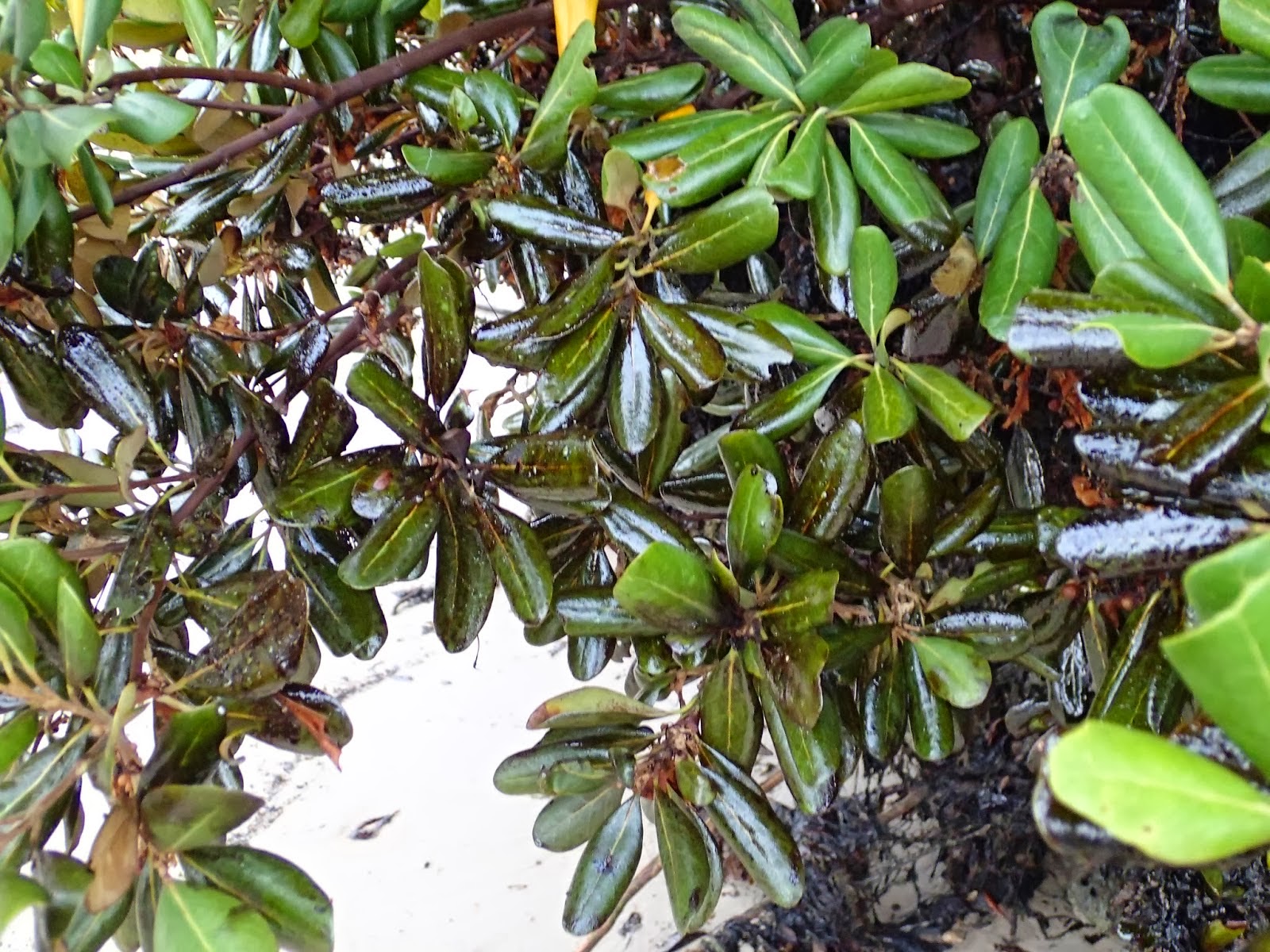 The large amounts of Sargassum seaweeds that washed ashore or were entangled in mangrove trees were soaked in oil. 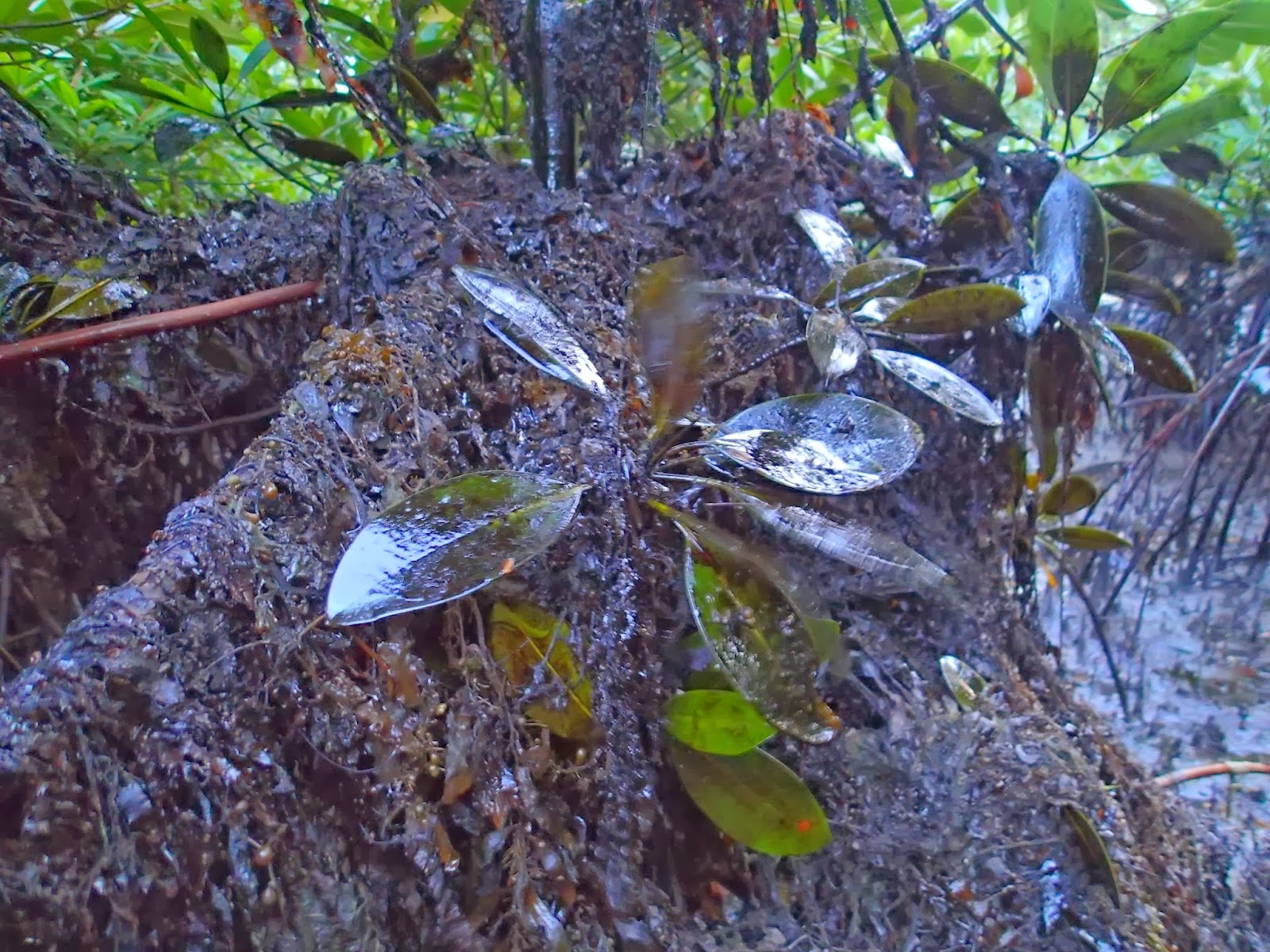 Pei Yan shared this slide show of photos of oil slick impact on Pulau Semakau. But she also encountered lots of other marine life on this rich shore that appeared to be doing alright.

During this trip, a drone was also deployed to take aerial photos. Among the awesome photos is this one showing the oil spill impact on the high shore. 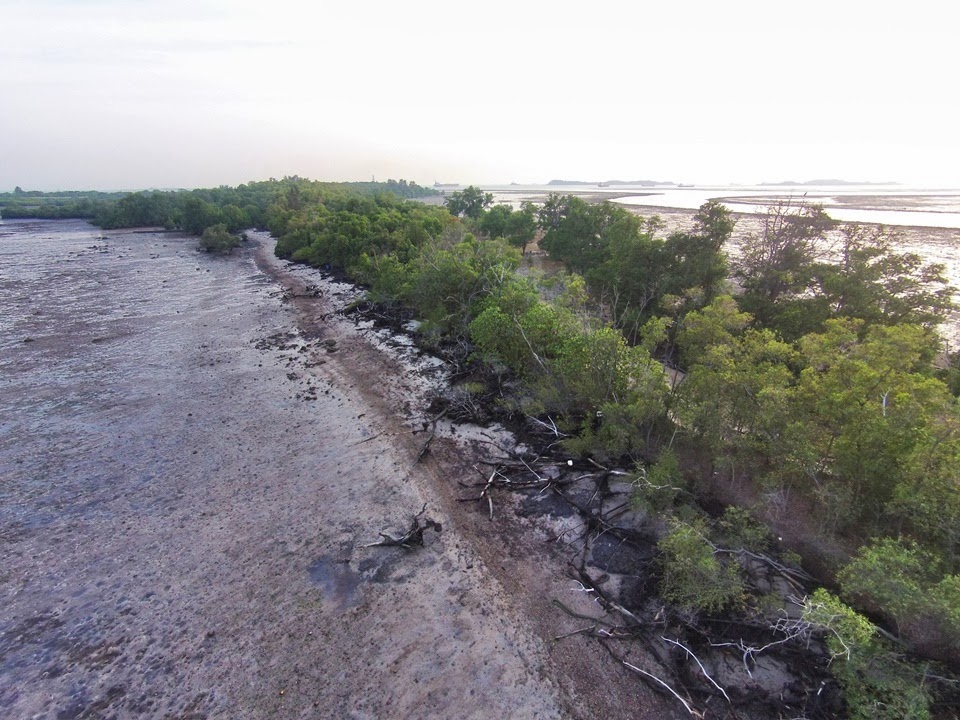 Kok Sheng's blog post showed his survey of Northern Semakau where he saw oil slick on the high shore and in some parts of the intertidal. On the whole the lower intertidal seemed alright and he saw clown anemonefishes, large anemones and the usual rich reef in the area. Special finds included a young Giant clam and his first encounter with a hard coral more often seen by divers.
Sadly, the rich shores at Pulau Semakau also have to cope with pressure such as trash and poaching.

At the same time, Russel Low was part of another team that checked out Terumbu Raya, a submerged reef next to Pulau Semakau. To our relief, all seems well there. In fact, the team there spotted three turtles surfacing, and a large Giant clam that we may not have seen on previous trips.

Pei Yan and Kok Sheng and Chay Hoon shared what they saw at Kusu Island: the oil slick was concentrated on the high shore and at the highwater mark (on the seawalls), although there was slick on the intertidal too.
There was oil slick on the corals too.
The beautiful reefs of Kusu Island also had to cope with several discarded mattresses and what appears to be bed frames, furniture as well as construction debris, strewn all around the island.
Despite the oil spill, Kok Sheng and Pei Yan blogged about the rich marine life that they still encountered on Kusu Island, including a Giant clam that we have missed all along. It's heartbreaking that this amazing reef has to deal with such unnecessary pressures.
Five days before the oil spill, the Hantu Bloggers dived the reefs at Kusu Island. And saw these delicately beautiful marinelife thriving there.


How much oil was spilled?

MPA media releases did not give quantities spilled in both the recent collisions. Two years ago, 5 metric tonnes of marine fuel oil was spilled on 4 Jan 2012. We didn't notice this level of slick impact during a survey shortly after the collision.

It seems dispersants were used to deal with the oil slicks, as this photo provided in an MPA media release suggests.
Unfortunately, dispersants merely reduces the oil to small globules. The oil is not removed and remains in the water in less visible suspension with an additional dose of MORE chemicals. Studies suggest that this oil-dispersant mixture is 52 times more toxic than just the oil alone or dispersant alone. More about how oil spill dispersants do more harm than good.