A chance encounter of our sea pencils on the wildsingapore fact sheets led Dr. Björn Berning and his team to investigate the 'bone' of sea pencil specimens from Changi, provided through the Raffles Museum of Biodiversity Research. 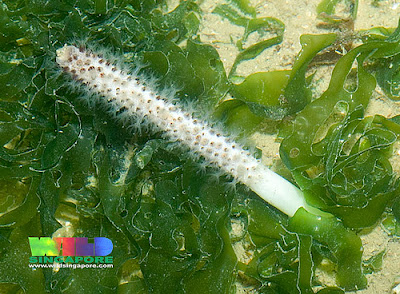 This helped correct the misidentification of a fossil as a bryozoan. This misidentification has resulted in incorrect information in recent textbooks, stating that bryozoan fossils appear in the Late Cambrian. However, the first unequivocal bryozoans are found only in the Early Ordovician, some 35 million years later, and none of the purported bryozoan fossils could convince bryozoologists of their presence in the Cambrian. It was awesome to learn about the detective work that went into sorting this out and how Changi's sea pencil and wildsingapore played a role.

What is a bryozoan?

Bryozoans belong to Phylum Bryozoa and are colonies of tiny individual animals (often only clearly seen with a microscope). Each tiny animal, called a zooid, builds a hard casing around itself. The box-like house has an opening with a tiny door, through which its tentacles emerges to filter feed. The colony forms as the zooids reproduce by budding. Each new casing remaining attached to the colonial members around it, forming a beautiful regular pattern of box-like houses. Some colonies take the shape of encrusting layers, others develop into delicate ruffles or branching forms. Here's more about some bryozoans seen in Singapore.
We were very fortunate to have Dr Dennis P. Gordon to come to Singapore teach us about bryozoans during a workshop in April, where we also went out in the field to find awesome bryozoans on our shores and streams.

What is a sea pencil?

Sea pens are so named because they resemble feathery quills used to write with in olden days. The sea pencil is a sea pen but isn't feathery, so I called it a sea pencil! (It also looks like the Vicks Vapor Inhaler thingies that you stick into your nose when you have a cold!). They are quite common at Changi, but only at night. During the day, they retract into the ground at low tide. 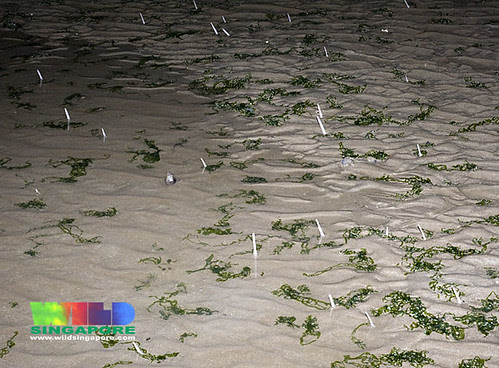 Sea pens belong to Phylum Cnidaria which includes jellyfishes, sea anemones, hard corals. So they are a different kind of animal entirely from bryozoans! A sea pen is also a colony of animals, called polyps. One kind of polyp forms the central 'stem' that supports the whole colony. Called the primary polyp, the bottom half forms a muscular 'foot' that anchors and can retract the whole colony into the ground. This is stiffened by an internal 'bone' (called the axis) made of calcium. The upper half sticks out of the surface and is where secondary polyps emerge from thick shared common tissue. In the sea pencil, secondary polyps are small but visible to the naked eye, transparent, with 8 branched tentacles. 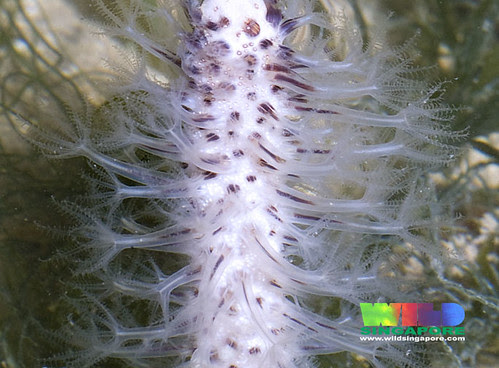 The photo below of a rotting sea pencil shows the exposed 'bone' with holes probably where the secondary polyps emerge? The rest of the sea pencil still has the fleshy shared tissue of the colony ending with the bulbous foot. Here's more about our sea pencils. 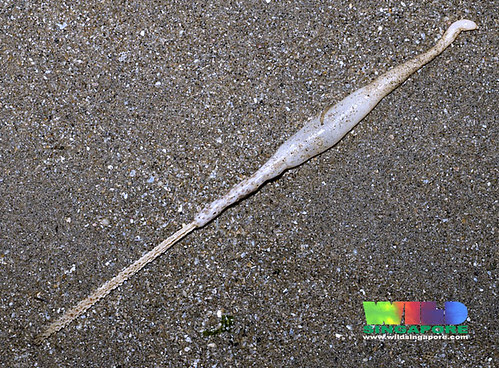 In a fossil, it does seem quite possible to mistake the 'bone' of a sea pencil for the tiny 'houses' of a colonial bryozoan. But Dr. Björn Berning points out, there are a number of morphological differences between the axis of a sea pen and a bryozoan colony by which one can separate the two.

And this is indeed what Dr. Björn Berning kindly explained to me when he emailed and shared the press release below about how a fossil called Pywackia is not a bryozoan but may represent the earliest known octocoral with a sea pen-like morphology and organization!

Wow! I'm so glad I did a webpage of the sea pen even though I didn't know its identity (sadly, the situation for many of Singapore's common marine creatures). The moral of the story: share your sightings, share your photos (even of dead and decaying animals), post up pages of your observations even if you don't know what it is you are looking at. You never know how it might help a scientist somewhere in the world wide web!

The big bonus for me, is that finally, I learn the ID of the sea pencil. It is Lituaria sp.! Thank you Dr. Björn Berning and Dr Dennis P. Gordon!

Meanwhile, the good doctors have their work cut out correcting the error that has crept into textbooks about the fossil record of bryozoans. Hopefully, this blog post will help a little towards this effort.

Here's the press release (pdf) about how Pywackia is not a bryozoan.
Posted by Ria Tan at 5:11 PM