Floods in Singapore and rising seas

Singapore's "overwhelmed" drainage systems are to be upgraded to "bolster the island’s defences against flash floods" and upgrades will be "stepped up". This follows the recent flash floods as the monsoon season starts in Singapore.
Environment and Water Resources Minister Vivian Balakrishnan has asked PUB to speed up ongoing work on 170 projects, and to start work on 36 new projects within 12 months.

Can things get worse?


Dr Balakrishnan said: “We are committed to doing our best to resolve this long-term problem. We have to, because climate change will make things even worse in the future, and we have to get ahead of the wave.”

National Geographic has an excellent article on Rising Seas which explain why seas rise and some of the possible impacts:


"Global warming affects sea level in two ways. About a third of its current rise comes from thermal expansion—from the fact that water grows in volume as it warms. The rest comes from the melting of ice on land. So far it’s been mostly mountain glaciers, but the big concern for the future is the giant ice sheets in Greenland and Antarctica."

"Even in the absence of something very nasty, coastal cities face a twofold threat: Inexorably rising oceans will gradually inundate low-lying areas, and higher seas will extend the ruinous reach of storm surges. The threat will never go away; it will only worsen."

"What will New York look like in 200 years? Klaus Jacob, the Columbia geophysicist, sees downtown Manhattan as a kind of Venice, subject to periodic flooding, perhaps with canals and yellow water cabs. Much of the city’s population, he says, will gather on high ground in the other boroughs. “High ground will become expensive, waterfront will become cheap,” he says."

How high will sea levels rise in one lifetime? A chart of some projections for 2100..
And if all the ice melted? Singapore and much of Southeast Asia that we know will not exist...


The maps here show the world as it is now, with only one difference: All the ice on land has melted and drained into the sea, raising it 216 feet and creating new shorelines for our continents and inland seas. 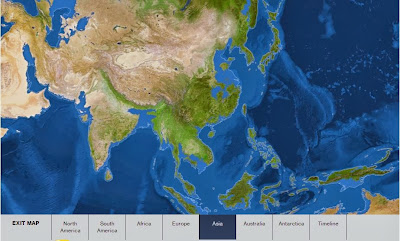 There are more than five million cubic miles of ice on Earth, and some scientists say it would take more than 5,000 years to melt it all. If we continue adding carbon to the atmosphere, we’ll very likely create an ice-free planet, with an average temperature of perhaps 80 degrees Fahrenheit instead of the current 58.