We found five different kinds of nudirbanchs on a rocky shore at Pulau Ubin that we visit too rarely. 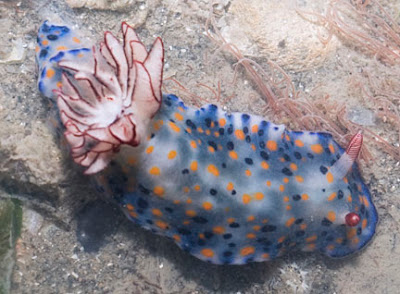 Our last visit here was two years ago, in Dec 2010! Pulau Ubin has beautiful rock formations including amazing 'fluted' rocks. You can read more about these unique and fascinating rock formations on November's Ubin Stories blog and Joseph Lai's eart-h.com. These beautiful natural rocks are encrusted with all kinds of marine life. 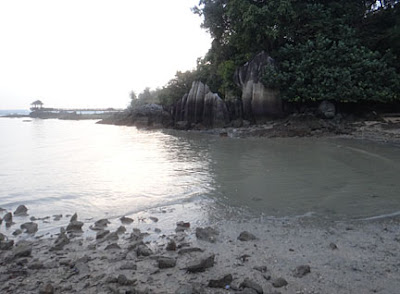 We need a good low tide to be able to see the colourful marine life that encrust the base of these large rocks. These include all kinds of sponges, ascidians, sea cucumbers. Special snails like the Onyx cowries (Cypraea onyx) were also there and colourful crabs clambered over everything. 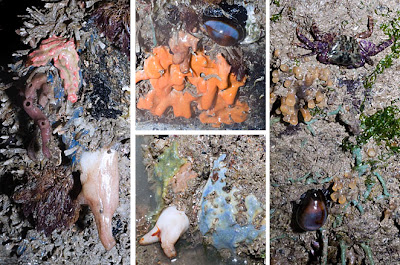 Nudibranchs feed on sponges and other encrusting animals, so it shouldn't be surprising to see a variety of nudibranchs on this shore. We saw three Rose nudibranchs (Dendrodoris fumata). I saw a tiny Sponge nudibranch (Ategema spongiosa). The rest of the team found Thordisa villosa and Hoplodoris nodulosa which are well camouflaged among the encrusted rocks. 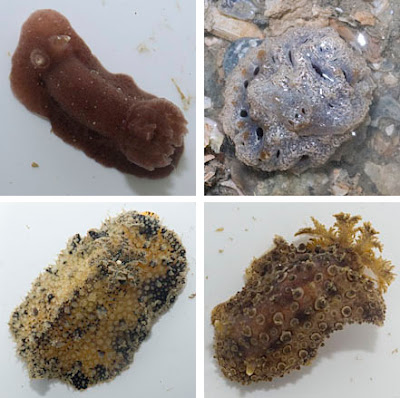 One of the Rose nudibranchs I saw was nestled among some pink sponges (Haliclona cf baeri). It seems to have been eating the sponge, see the chomped parts where the nudi was. 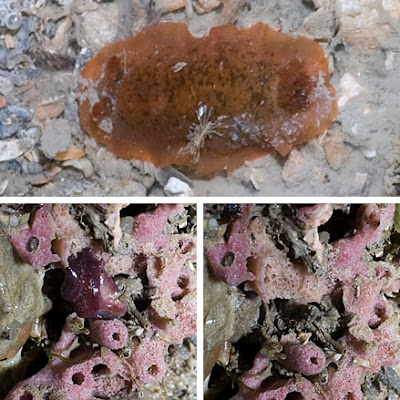 Flatworms are also predators of encrusting animals. I saw several blue spotted flatworms (cf Pseudoceros indicus) and one purplish flatworm on some ascidians.

These strange colourful blobs are Ball tip corallimorphs that have retracted their tentacles when out of water. They come in a variety of colours.

How nice to see the two different colours that a Crown sea star (Asterina coronata) can have. One is dull coloured and blends in with the dull rock. But even the bright orange one is hard to spot among the colourful animals that encrust the rocks. 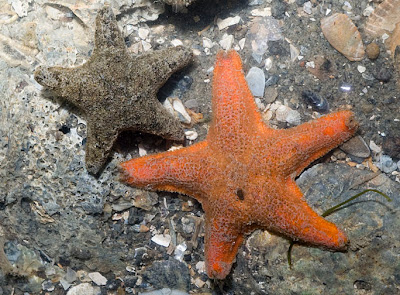 I saw this blue feather star while the rest saw more and took better photos of them. They also saw sea fans with the many different kinds of animals that live in them.

Some parts of the shore near the big rocks were super soft, coated in a thick layer of Nest mussels (Musculista senhousia). Many tiny anemones were embedded in the 'nest' created by the mussels. While several kinds of Drills (Family Muricidae) were roaming the nests, probably eating the mussels. 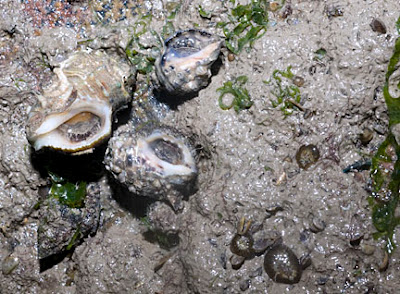 On the way home, I stopped by to have a look at some of the rock pools. There were all kinds of little animals in them including small swimming crabs, tiny shrimps, small sea anemones, various small fishes and even a Pygmy squid (Ideosepius sp.). 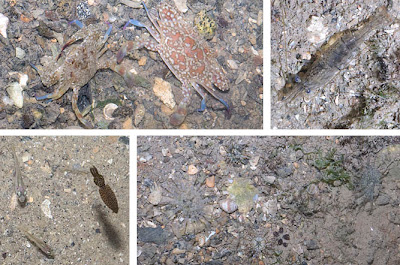 Sadly, I came across a fish trap and a driftnet laid in deeper water. Alas, we couldn't remove the net as the ground was too soft. 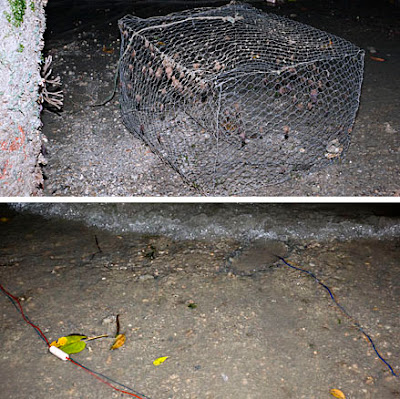 This shore also has seagrass meadows and mudflats which I didn't have time to explore. This shore reminds me of Chek Jawa, Pulau Sekudu and Beting Bronok, some of the spectacular shores in the North. 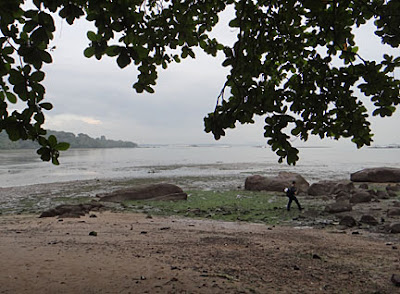 It's good to know that it is still doing well. We must try to visit it more often. There are just not enough low spring tides to cover all our favourite shores.