At the Cyrene Reef beacon

I checked out Cyrene Reef near the beacon on our team's last trip to Cyrene for the year. The beacon is 1km from our landing point, so it was a long walk there and back! 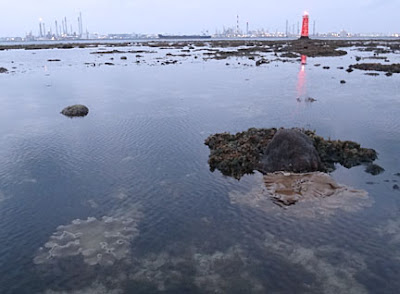 I haven't focused on this area for years and I wondered how it was doing.

There are many large leathery soft coral (Family Alcyoniidae) here. I noticed that many of had lots of ctenaphores on them. Resembling flat worms, I saw ctenaphores with stripes, others with spots. 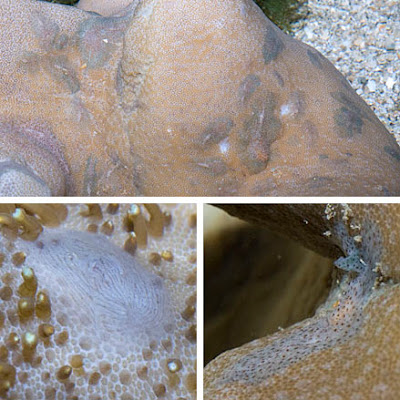 These tiny flat animals are more obvious in submerged leathery soft corals where the polyps are extended. The ctenaphores are where the 'bald' patches are. 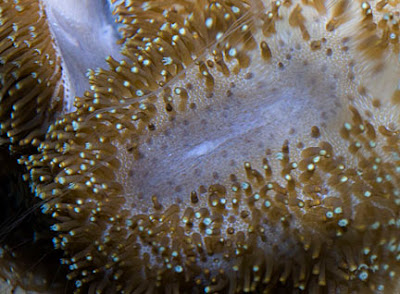 As I looked closely at the leathery soft corals, I noticed a Very hairy hermit crab (Dardanus lagopodes) nestled in the middle of one. 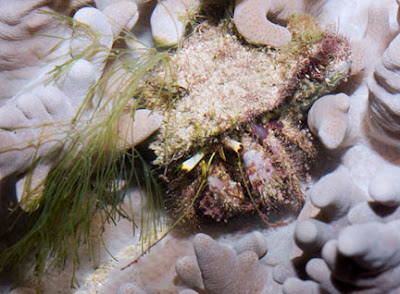 There aren't many living corals in this area. As with many of our shores, the most abundant were Favid corals (Family Faviidae). There were also many Pore coral (Porites sp.) and some flowery soft corals (Family Nephtheidae). This area is not as 'reefy' as the western end of Cyrene which I surveyed on our trip last month, and this has been the case on my previous checks here. 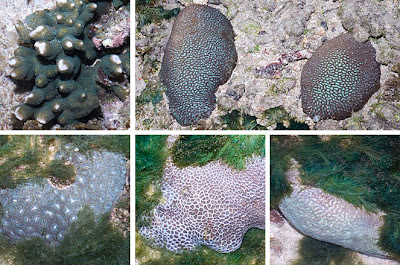 I came across one Pore coral with many bright pink patches, and three other small coral colonies with signs of bleaching. Oh dear. 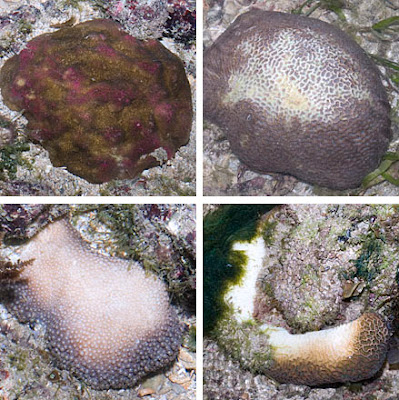 I also came across a Spider conch (Lambis lambis); I've looked at my records and it seems we haven't recorded this rather common snail for Cyrene yet! As with night trips on most of our shores, I also saw several octopuses. 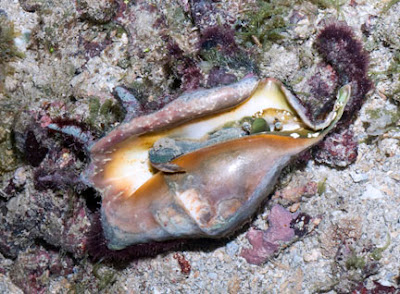 One pleasant surprise in this corner of Cyrene was to see many patches of long Tape seagrass (Enhalus acoroides). Most of these long patches had lush growths of Hairy green seaweed (Bryopsis sp.). Len of SeagrassWatch during his trip to Cyrene in May 2012 suggested that the Tape seagrasses are cropped and burnt because the white sand in shallow areas may reinforce the heat. So perhaps the green seaweeds made it easier for these clumps of Tape seagrasses? 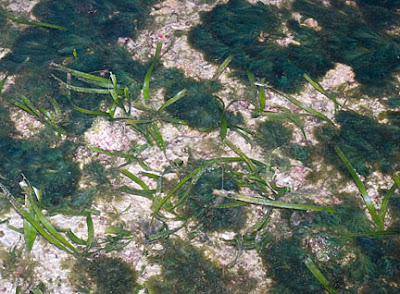 Elsewhere on Cyrene, although there is good growths of other kinds of seagrasses, the Tape seagrasses are cropped short. 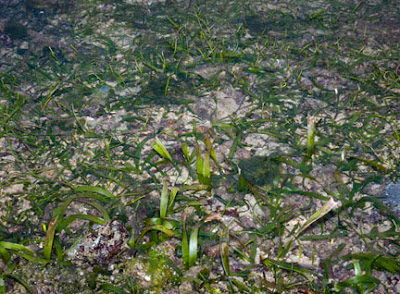 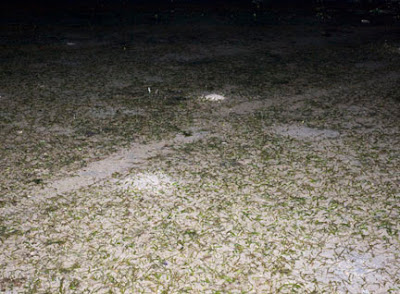 There is an unusual abundance of various grape-shaped green seaweeds today, such as Caulerpa racemosa. I saw some producing a yellowish 'cloud': reproduction? The rest of the team found tiny slugs that resemble these seaweeds, but I was too blind to spot any. 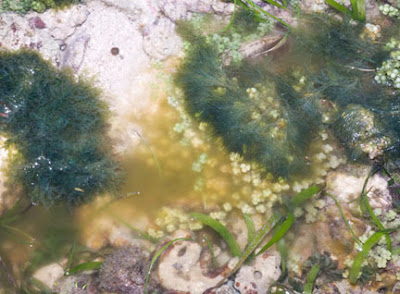 A disturbing encounter was to see many many long wooden poles on this part of Cyrene. There must be about 30 of them, each about 2-3m long. They look like the kind of poles used in scaffolding. There isn't much growing on the poles so they probably haven't been on the shore for long. These poles may damage corals and other marine life as they roll about in the waves, abrading the shore and squashing soft animals like these Long black sea cucumbers (Holothuria leucospilota). Were the poles dumped on Cyrene? 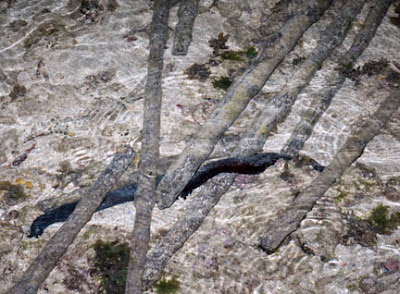 As I was walking back, I saw a long straight line in the distance. Uh oh I thought, it's an abandoned driftnet. But no, it turned out to be a line of rocks! 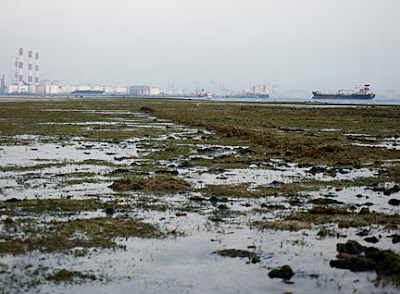 There are various animals living on these rocks, including some intriguing Creeper snails (Family Cerithiidae). There are many kinds of these snails and I haven't yet had a closer look at them. 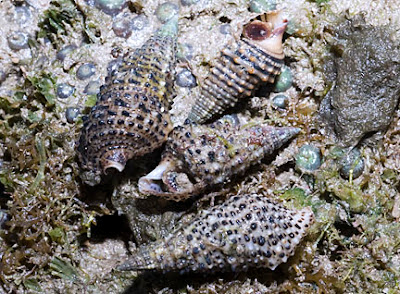 It was bright and sunny by the time I walked all the way back to our departure point. So nice to see that the many Knobbly sea stars (Protoreaster nodosus) are still there. The team also spotted the special Pentaceraster sea star (Pentaceraster mammilatus) that was first seen on Cyrene and is a new record for Singapore. 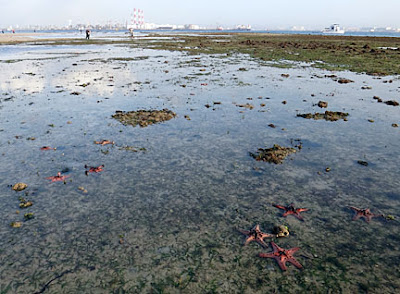 The team was hard at work elsewhere on Cyrene in the predawn hours. Among their interesting finds were these tiny sea anemones stuck onto seagrasses. They look different from the Seagrass anemones we have recently seen on Cyrene and elsewhere. Wow! 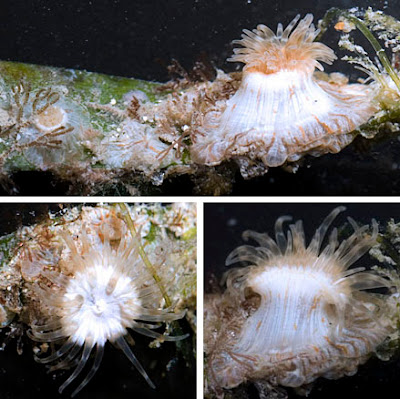 Among the little crabs they saw, there was this odd crab with 'hairy' pincers. 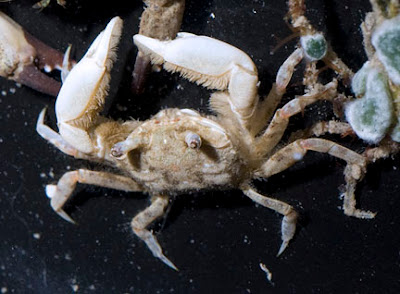 They also found our first sighting of the Polka-dot sea cucumber (Holothuria ocellata) for Cyrene, as well as two strange sea cucumbers that I've not seen before. In shape, they look somewhat like the Smooth red sea cucumber (Actinopyga sp.) which we have found on coral rubble. But these on Cyrene were seen on sand among seagrasses. Another mysterious creature to figure out.  Kok Sheng also found a Cake sea star (Anthenea aspera), a rare sighting on Cyrene. 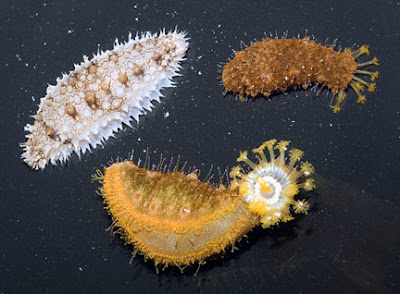 There were many Big synaptid sea cucumbers (Family Synaptidae) among the seagrasses today.

With the team's finds, I had a closer look at these creatures. They have feathery feeding tentacles, and their bodies have tiny hooks that catch onto stuff. Which is why we shouldn't handle them as this might tear these delicate animals. 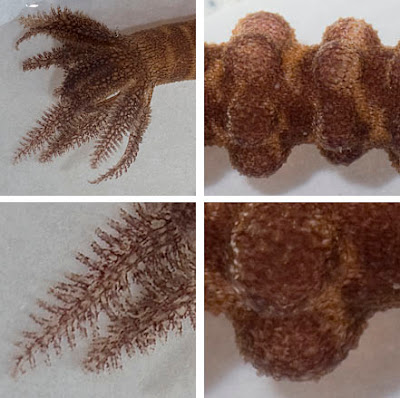 Of course many interesting slugs were also found, as well as other sightings which I'm sure the team will share soon.

Sadly, we didn't see any sharks today although everyone looked hard for them. I hope the sharks are ok.

This is our last predawn trip to Cyrene and our last team trip to Cyrene for year as there are few favourable low tides the rest of the year. But working trips to Cyrene with TeamSeagrass will continue! Hope Cyrene stays well until we can visit again next year.

Tomorrow, we have a look at Big Sisters Island!