Cyrene in the dark

Today is our annual night trip to Cyrene Reef. We try to do this a few times in a year, because marine creatures are usually more active in the dark. 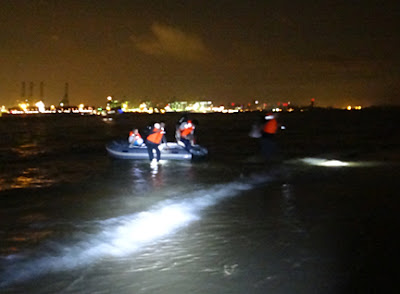 And indeed, we spot many special creatures, some of them for the first time on Cyrene!


How nice to see these pretty pink Laganum sand dollars (Laganum depressum)! These are rarely seen elsewhere, and despite visiting Cyrene so frequently, it's my first time seeing them on here. 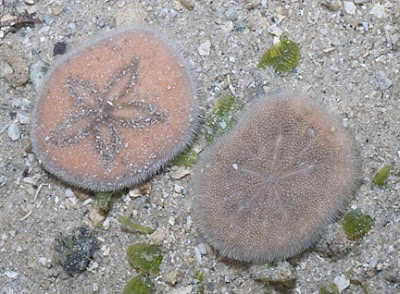 Mei Lin found the Zebra moon snail (Natica areolata) which we seldom see. She noticed it was dragging another snail on the tip of its back foot. Something we noticed when we saw this snail elsewhere too. 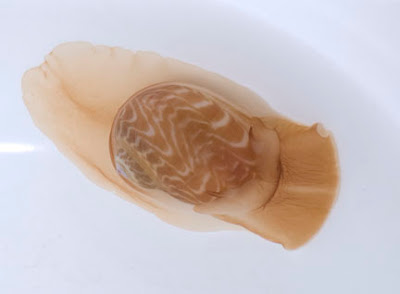 Mei Lin also found this unidentified sea anemone. It was stuck to a piece of dead coral, with a short body column that has tiny pink dashes, lots of slender tentacles and white bars on the oral disk. We have no idea what it is. 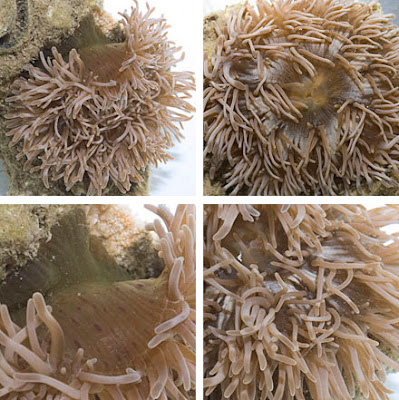 Another mysterious animal that Mei Lin found is this unidentified sea cucumber.

James found this crab that was carrying a piece of coral rubble and moving like a hermit crab in an empty shell. 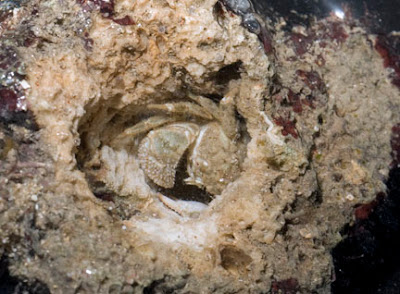 Here's what the crab looks like out of its hiding place. Once again, another mysterious beast. 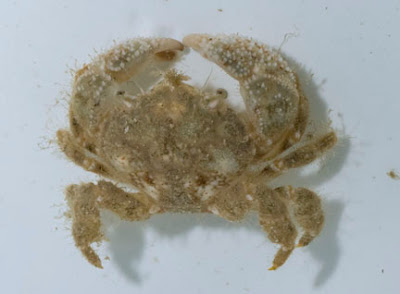 Alicia found an elbow crab (Family Parthenopidae) that looks kind of different from the usual ones that we see. 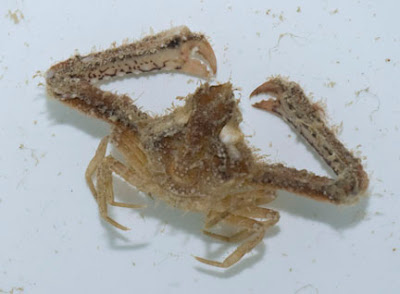 I saw a Snaky sea anemone (Macrodactyla doreensis) with a pair of Five spot anemone shrimps (Periclimenes brevicarpalis) in it. This is my first time seeing these anemone shrimps in this anemone. I also saw many Swimming anemones (Boloceroides mcmurrichi) both large and very tiny. Also some Haddon's carpet anemones (Stichodactyla haddoni) mostly tiny or medium sized. 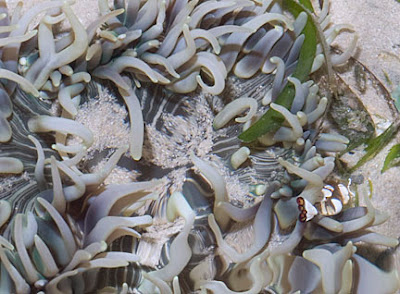 Although Cyrene is not densely covered by corals, there are many large coral colonies here and in some places hard and soft corals grow close together. I took this opportunity to do a quick check of the reefy parts of Cyrene to see whether there is any coral bleaching going on. 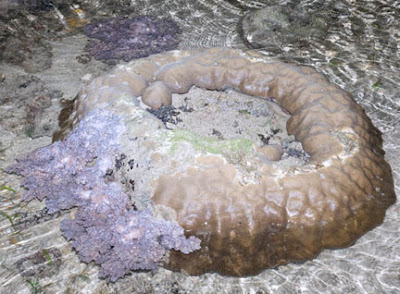 It was good to see some healthy Cauliflower corals (Pocillopora sp.). These were among the first to bleach during the mass coral bleaching event in 2010.

The are lots of healthy Pore coral (Porites sp.), and some of the colonies were quite large. 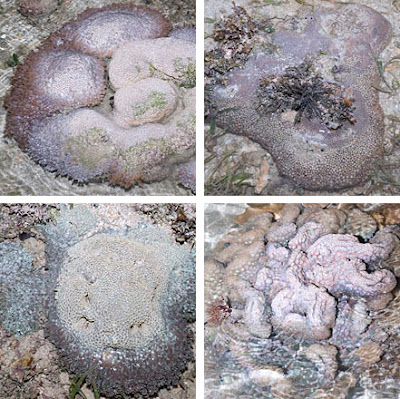 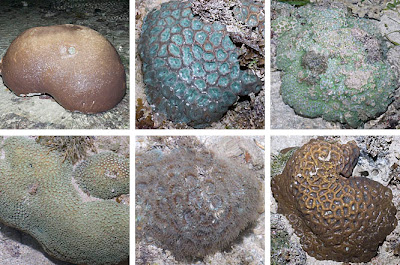 I only came across these two partially bleaching colonies.

Besides these special finds, we also enjoy meeting familiar favourites like the Knobbly sea stars (Protoreaster nodosus). Which are still abundant on Cyrene! 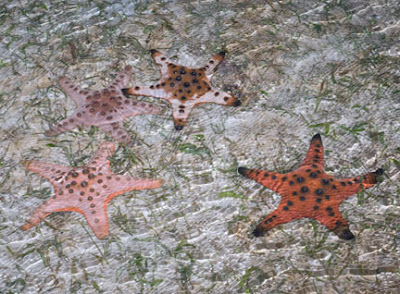 We saw several of the special Pentaceraster sea star (Pentaceraster mammilatus) that was first seen on Cyrene and is a new record for Singapore. We saw two small ones and Russel saw a big one that is darker, so we sometimes call it the Death Star. 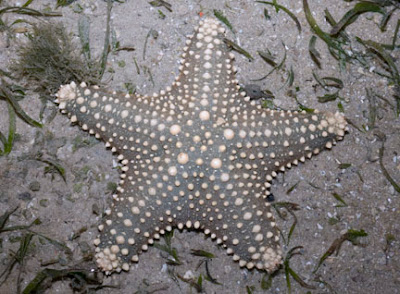 Today, we saw many of these strange nudibranchs. Melibe viridis has a 'hood' at its head that it can stretch out ostensibly to trap tiny prey. It can also swim! 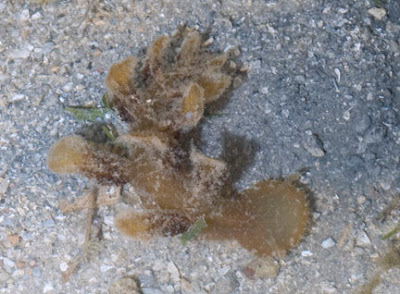 Here's a closer look at the 'hood' of the nudibranch! These creatures are seasonally abundant and it has been a long while since we saw them on Cyrene. 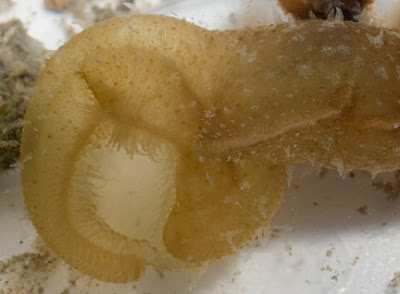 It's always nice to see the colourful Mosaic crabs (Lophozozymus pictor), Singapore's most poisonous crab. It can be deadly to eat even after it is cooked. Animals with bright colours and patterns should usually not be messed with. 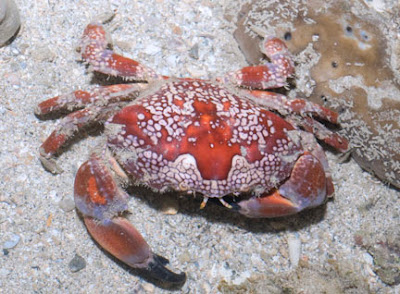 As usual, colourful Swimming crabs (Family Portunidae) are common on the reef, as well as the large Spotted black flatworm (Acanthozoon sp.), all near a large leathery soft coral. I also saw an Olive flatworm. 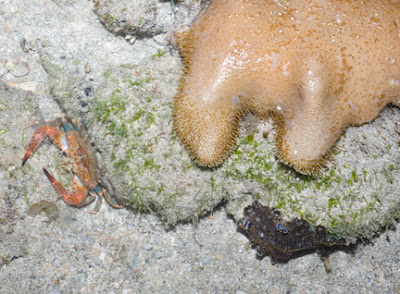 In the dark, the Grey bonnet snail (Phalium glaucum) are more active. Cyrene is one of the few places where this snail is commonly seen. In the lower right corner is a tiny China moon snail (Natica onca)! 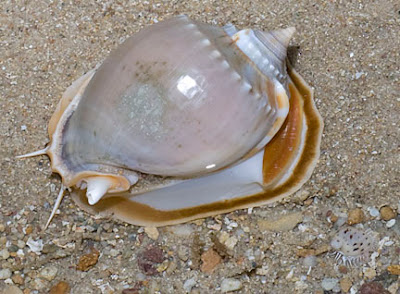 I also found the less commonly seen Japanese bonnet snail (Semicassia bisulcatum). It is smaller and has a spotted shell with a dark foot. 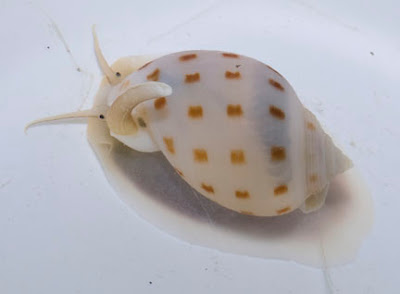 Another special moon snail is the Eggwhite moon snail (Polinices albumen). Its common name makes sense only when the pure white animal emerges from its orange shell. It then does kind of look like a sunny-side fried egg. 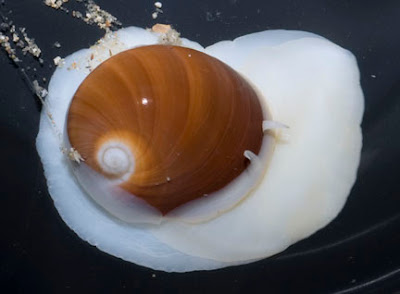 There's an octopus perfectly camouflaged among these seaweeds. Can you spot it? 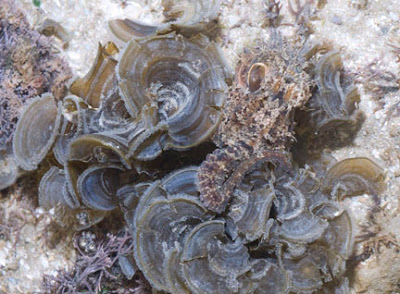 I had a look under the rocks and saw some Scintilla clams (Family Galeommatidae). These tiny clams with delicate shells produce little fingers and have a long foot. They can move quite rapidly!

Of course the rest of the team saw lots of other awesome marine life. I'm sure they'll blog about them soon.

When we first landed, there was a huge cloud of emissions over the refineries on Pulau Bukom. 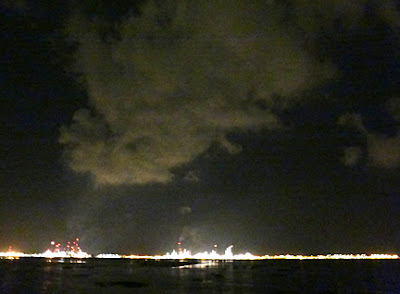 In daylight, we notice a few deep holes on Cyrene, probably caused by boats accidentally striking the reef. 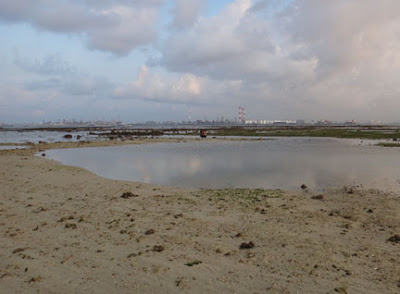 Today, we had a muted sunrise over the city and the container terminals. 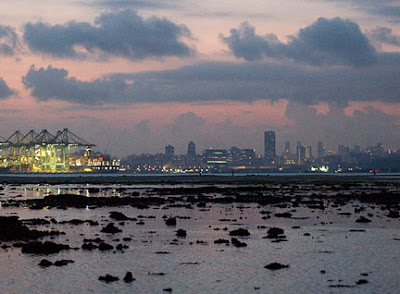 Although Cyrene lies in the middle of the "industrial triangle" it has magnificent seagrass meadows, wonderful reefs and amazing marine life!

Tomorrow, I'm going back to Cyrene, this time for a special trip to introduce this marvelous reef to a special group of people.